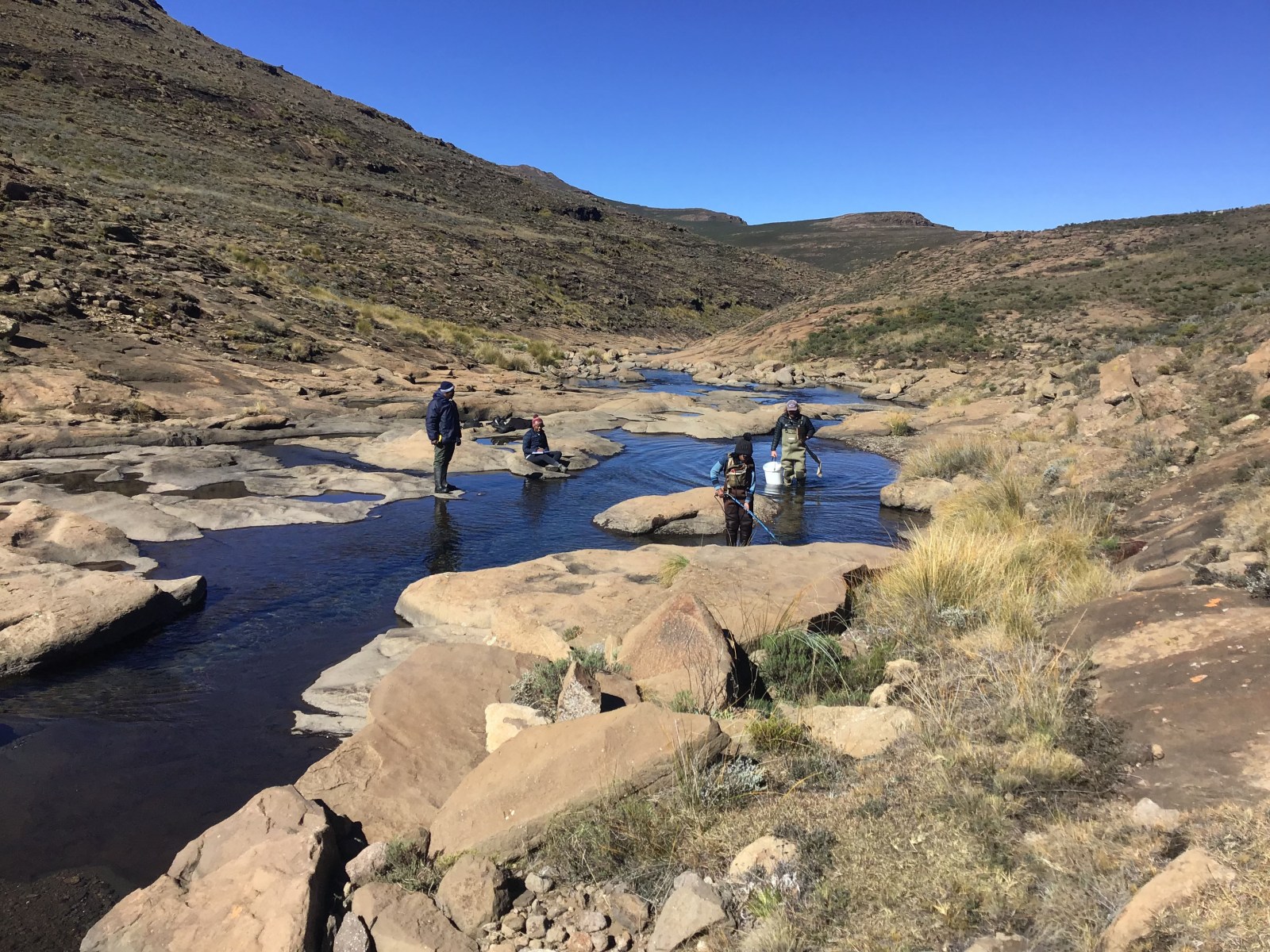 A small team of fish scientists travelled high up into the mountains of Lesotho nearly two decades ago to launch an unusual and far-sighted rescue mission.

The wisdom of that decision has now been vindicated by recent research projects.

But roads were poor or non-existent along much of the proposed translocation route. And time was of the essence to ensure that the minnows survived their journey.

As a result, the rescue team was compelled to use special pressurised storage tanks and to shift them with unconventional transport systems — on horseback, off-road scrambler motorbikes and 4×4 bakkies.

Dr Johannes Rall, a fish scientist who conducted his MSc and PhD on the Maloti minnow (Pseudobarbus quathlambae) and was responsible for the 2002/2003 translocation programme, said the fish were collected from three main rivers (Senqunyane, Bokong and lower Jorodane) to ensure maximum genetic diversity.

The team had a mobile 1,000-litre water tank equipped with oxygen cylinders, pumping equipment and zeolite mineral additives to purify ammonia and other organic waste from the temporary fish holding tanks.

Because captured fish often vomit and defecate a lot as a result of the collection stress, the minnows were kept for 24 hours in a “fresh out tank” to ensure the best quality water for journeys of up to 48 hours.

Amazingly, not a single fish died during translocation, recalls Rall, who now works in New Zealand.

Such was the concern about the future of the fish that some scientists also embarked on a captive breeding project (and sperm cryopreservation) with successfully fertilised juveniles translocated back to the wild.

So why did the scientists go to so much trouble to shift these minnows in the first place?

At the time, this minnow was recognised as Lesotho’s only endemic fish species (found nowhere else in the world).

On average, the adults grow to a length of just 8cm — slightly longer than a penlight torch battery — and the majority of these fish live in mountain streams protected by the towering Semonkong Falls.

This natural barrier of vertical stone halted alien trout and other large indigenous predatory fish from migrating upstream to eat or displace the rare minnows that had survived and evolved over many, many centuries in a unique natural river sanctuary.

But the alarm bells rang among fish scientists during the late 1980s with the announcement of the new Lesotho Highlands Water Project, a multi-billion rand engineering project that would entail capturing, storing and then transferring massive volumes of water from Lesotho to South Africa.

The construction of some of the dams would not only flood large sections of river inhabited by the endangered Maloti minnow but there was a real risk that an artificial concrete tunnel to link up some of the dams would effectively by-pass the Semonkong Falls and allow predatory fish such as trout to eat the upstream minnows that had been protected naturally by the 192m high waterfall for millennia.

These fears proved true. By 2016, studies showed that the Mohale population had all but disappeared from its native range due to flooding by dam water, construction of the inter-basin water tunnel and disturbance by trout, smallmouth yellowfish, Orange River mudfish and rock catfish.

Two decades down the road, however, the translocation mission seems to have produced a happy ending — albeit precarious — says Dr Jim McCafferty, an ichthyologist and freshwater fish consultant with Advance Africa Management Services.

In a presentation to the recent Conservation Symposium hosted by Ezemvelo KZN Wildlife and other nature conservation groups, McCafferty noted that the minnows still face an “uphill battle for survival”.

“But thanks to the efforts of conservationists in the early 2000s – and their foresight – the future is not all that bleak,” he suggested.

McCafferty notes that while the Maloti minnow is still widely regarded as a single species, there are in fact two unique and genetically-distinct populations (known as Evolutionarily Significant Units or ESUs) – the Mohale ESU and the Eastern ESU population that are geographically separated by a distance of about 350km.

The Mohale ESU population (previously the largest of the two units) was under particular threat by both dam building and the construction of the inter-basin water transfer tunnel.

He said it had been hypothesised that the gradual genetic divergence between the two units was due to geographic isolation above the Semonkong Falls.

During a recent (2017 – 2019) survey, McCafferty and his colleagues revisited the remote rivers to monitor the current status of the translocated fish in the Jorodane, Makhaleng, Maletsunyane, and Quthing rivers.

A previous survey in 2006 showed that the fish had survived in only three of the four rivers to which they were translocated nearly 20 years ago.

As no follow-up surveys had been undertaken since 2006 it was critical to assess the status of the translocated populations (potentially representing the last remnants of the Mohale ESU).

McCafferty’s survey suggested that the minnows had disappeared from the Makhaleng and Quthing rivers, but were still alive in parts of the Jorodane and Maletsunyane rivers.

This raised the question of why the fish should persist in some rivers, but not in others with similar habitats.

McCafferty said local residents reported that there was a major drought during 2018/2019 during which the Makhaleng river stopped flowing completely, followed by severe flooding. It was, therefore, possible that the translocated survivors in this river had been wiped out by the severe weather events and this demonstrated that translocation does not provide a foolproof insurance policy.

It also meant that survivors in the Maletsunyane and Jorodane were possibly the last remnants of the Mohale ESU.

The Maletsuyane population was also at high risk because of its proximity to a recreational trout fishing area. Alien brown trout were currently isolated from the minnows by a small weir, but there were serious risks if trout were to be released above this weir.

As a result, the Lesotho Highlands Development Association has developed a conservation action plan which includes proposals for a new zonation scheme for rivers that still support the minnows, along with engagements with affected stakeholders, public awareness and education drives.

“It is critical that these minnow populations, and activities in the catchment areas, are routinely monitored and managed to prevent the introduction of non-native fishes and to limit poor land-use practices,” McCafferty told the November 1 – 5 symposium.

McCafferty told DM/OBP that, fortunately, the picture had changed further since then, with the very recent re-discovery of relocated minnows in both the Quthing and the Makhaleng rivers, after several previous surveys showed that they had disappeared from these rivers.

“So it looks like the relocations to each of the four rivers may have worked,” said McCafferty, praising the role of the Lesotho Highlands Development Authority’s Biodiversity Management Unit survey team.

“They are an incredible group of ladies who I mentored and who have been involved in the surveys throughout. They are immensely passionate about conserving the minnow.”

This team, working under the leadership of Palesa Monongoaha, is responsible for monitoring and evaluation of water quality, integrated ecosystems management and the conservation of biodiversity in the catchments.

Thanks to their continued monitoring work – and the foresight of several fish conservationists – the last of the “Mohalicans”  are still with us… for now. DM/OBP