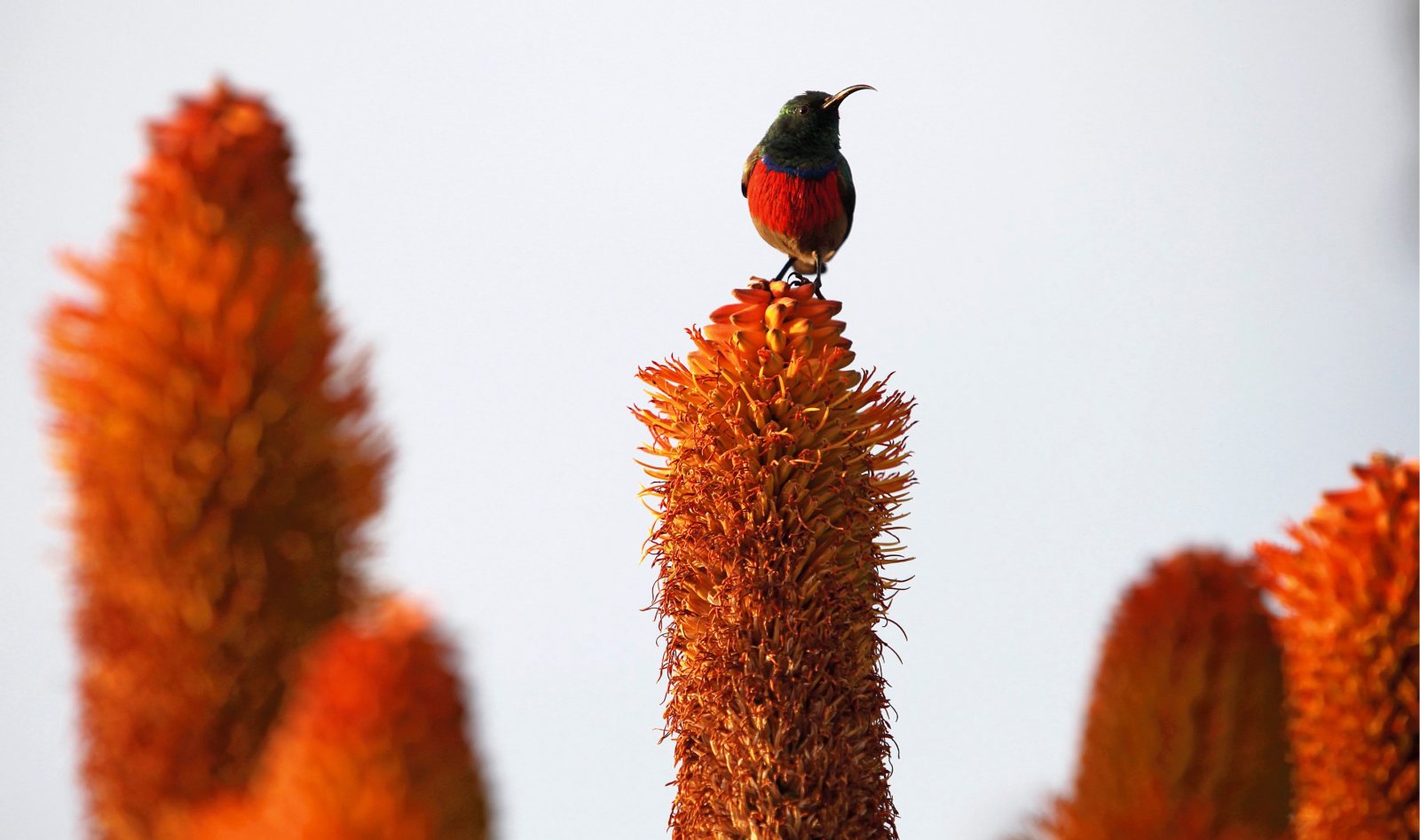 Drive into the wild blue yonder. The coastal strip called the Wild Coast may seem as remote as another country, but its actually really accessible. The greater double-collared sunbird is fairly common in this region. Feature text available. (Photo by Gallo Images/GO!/Ruvan Boshoff)

For a long while, it was assumed that only humans have personalities or can exercise self-control. Now, biologists are beginning to discover that birds and other wild animals share these traits with humans.

We explored how self-control and personality influenced feeding behaviour in the great tit, a common species of garden bird in Eurasia, and our results revealed that both factors play a large role in how they make their decisions.

Self-control is the ability to control one’s impulses. Even as adults, many of us struggle with self-control on a daily basis. Against our better judgment, we might choose to eat that extra slice of cake rather than an apple, or switch on the TV instead of going for that walk. We reprimand ourselves and each other lightheartedly when we fail, and in many cases there are no serious ramifications for a few less-than-ideal choices.

But the evidence suggests that success in many areas of life depends on self-control.

Personality also guides many of our decisions. Our “extraversion” influences how we socialise, and our “openness” affects our tendency to take risks. Unsurprisingly, personality too can influence life outcomes, such as happiness and health.

Self-control in the great tit

Life in the wild is harsh and few animals live as long as they might, often because of their inflexibility when making decisions.

We wanted to explore whether they just keep on doing the same old thing, led by their natural impulses – or can they change their behaviour when needed.

First, we trained wild great tits, temporarily taken into captivity, to become proficient at finding hidden food that could only be accessed from the side of an opaque plastic tube. When the tube was switched with one that was transparent but otherwise identical, many birds pecked impulsively at the front of the tube, through which the food could be seen. Others resisted this impulse and quickly realised that food could only and easily be taken from the side.

This “detour-reaching task” is often used as a way of measuring inhibitory control, one of the key cognitive processes in the brain that underpins self-control.

Those same great tits with greater inhibitory control were also those who were more flexible in an experiment that mimicked one of the ways that great tits find food in nature.

In this experiment, birds were trained to find mealworms hidden under sand until this behaviour became very natural to them. When a better – bigger and more visible – food option was suddenly also made available on the surface of the sand, the birds who were identified as having good inhibitory control earlier were also the ones who were able to resist their impulse, or break their habit, of simply looking for hidden food under the sand. Instead, they switched to the new better food option, even though it was in a transparent glass vial, so not so easily accessible.

Foraging flexibility is important for survival, but this is the first time it has been linked to self-control in animals.

However, we also wanted to explore whether personality played a role in their foraging flexibility.

To measure personality in the great tit, we used a standard test of exploration behaviour – the tendency to explore new environments.

This bears a strong resemblance to the “openness to new experiences” personality scale in humans.

Exploration behaviour is measured easily by assessing how much birds move around when put in a new environment, in our case a room with five artificial trees that they had never seen before.

Some birds were faster explorers than others. Previous studies have shown that this simple personality trait is inherited from parents and predicts all sorts of life outcomes in great tits, including sexual promiscuity (which can increase the paternity a male acquires at other nests but can also lead to a loss of paternity at their own nest) and length of life.

It also predicts the tendency to take risks. Fast explorers are risk takers.

So when the sand foraging experiment was repeated under predation risk, achieved by placing a stuffed hawk briefly in the same room at a safe distance from the birds, the fast explorers were far more willing to switch to the new food on the surface.

It is well known that animals do not like novelty when there is a threat from a predator, and we suspect this is why the slow explorers, those that avoid taking risks, stayed with choosing the hidden but familiar food, while the fast explorers were happy to increase their risk of being eaten, so they could exploit a new, and potentially better, food source.

The complexity of animal behaviour

Our findings suggest that these two quite different behavioural traits – exploration behaviour and risk-taking (personality) and self-control – together explain how flexible birds are when choosing food. This illustrates how complex animal behaviour can be.

Since survival and reproduction depend enormously on food, our results suggest that self-control and personality may well be influential determinants of Darwinian fitness, that is, the ability to pass on genes to the next generation.

However, the implications for fitness are not easy to predict. In the same way that impulsive behaviour can also be good for people in specific circumstances – it may benefit innovation and entrepreneurship – the costs and benefits of having good or poor self-control, or indeed of being a fast or slow explorer is also likely to vary in the wild.

Humanity would do well to remember that we are controlled by the same behavioural traits that determine whether wild animals prosper or become extinct, and ensure that we apply our ability for flexible thinking to the most important challenges facing our planet. DM/ML