Virus has swept through Western Cape town of Clanwilliam, causing death and suffering to dozens of dogs 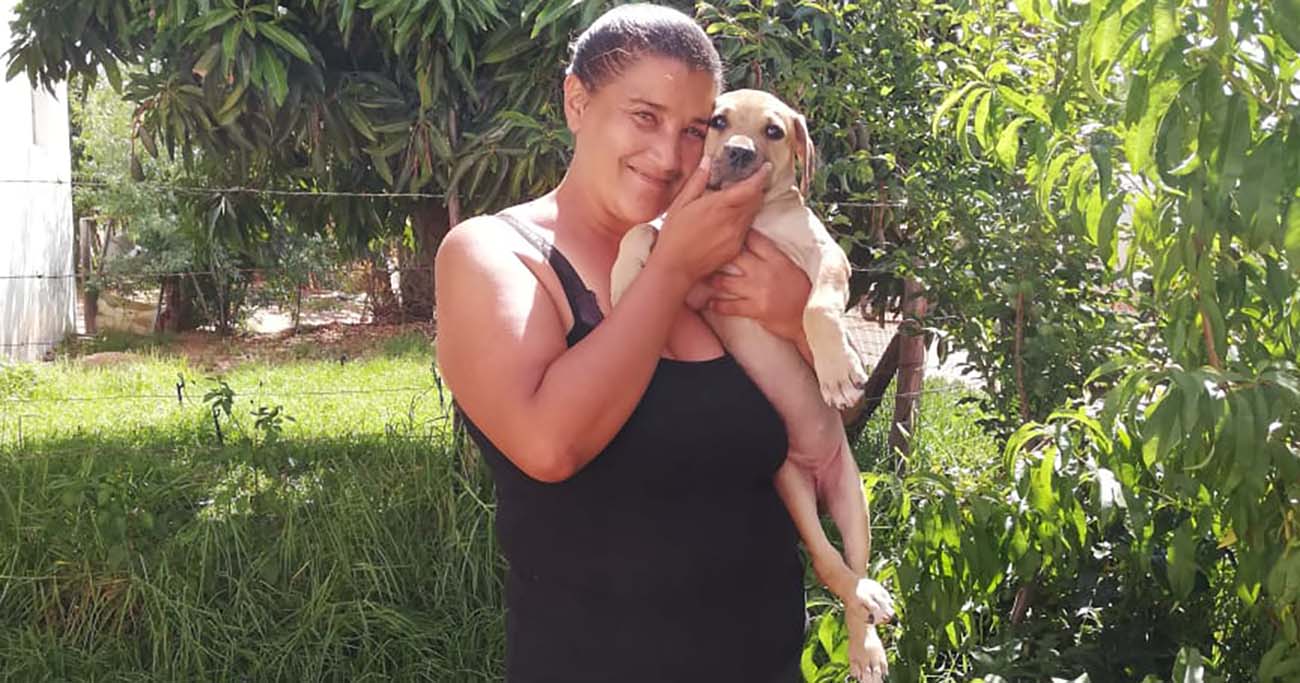 Linette van Taak drives all over Clanwilliam responding to calls for help with sick animals. Jeslize Jonas, pictured, thought her three-month puppy, who had distemper, was about to die. (Photo: Supplied)

Clanwilliam in the Western Cape is seeing an increase in dogs dying from canine distemper virus and animal welfare organisations are battling to keep up with the number of animals that need to be put to sleep or buried.

“What are the residents of Clanwilliam to do with their dogs that have died? This will not be one or two a week; it will be 15-20 a day.”

Jeanine Mitchell, a veteran volunteer with Clanwilliam Animal Welfare (CLAW), was engaging with a Clanwilliam municipal official two weeks ago, warning about what she saw as an unfolding crisis in the area.

Distemper, the fatal “dog disease”, had previously swept through Citrusdal and Lamberts Bay, and now it had Clanwilliam in its grip, biting down hard on words like fever, diarrhoea, eventual neurological disorder and death.

Mitchell’s volunteer colleague, Linette van Taak, who by all accounts gets down and dirty with the dead and dying in the streets and yards of Clanwilliam, tells of sad-eyed dogs in cages and stiff bodies abandoned in the veld and on street corners.

“The husky puppy you see in the cage we found on Friday? He was so far gone, getting crazy and biting a steel pipe (due to neurological damage). As with any animal beyond hope – and being found on a Friday (we only have a vet on Tuesdays and Thursdays) – we take them in a borrowed bakkie to one of our volunteers, a qualified veterinary nurse in a neighbouring area, who puts them to sleep.”

Van Taak says that another volunteer committed suicide about 10 days ago. She says that while there may have been other factors behind her actions, she knows the volunteer was distressed about the animal welfare situation in the area.

Distemper means an ugly death if not treated. However, van Taak says if it’s caught and treated within two days, the virus has less chance to cause serious damage.

She tells the story of a boisterous adult tail-wagger called Prince who she feared would be “PTS – put to sleep”. She tells of Jeslize Jonas calling from a farm two kilometres outside town, worried about her three-month-old puppy who wasn’t eating or drinking.

The CLAWS volunteer went out and treated the puppy, and gave Jonas instructions on care going forward.

This, despite the fact that vaccinations are free. It’s almost like Covid among the canines, except that it is the owners who are anti-vaxxers, with the animals having no say. Mitchell believes that if her attempts to engage with the municipality had been heard, they wouldn’t have reached this stage.

A “stage” that started on 1 November, says van Taak, when CLAWS was notified that a dog was sick, presenting with yellow mucus discharge from the eyes.

“We realized this was distemper, a highly contagious, airborne virus that hasn’t been around for about six years.”

Distemper is spread by dogs walking about in the street. In Clanwilliam’s poorer areas, like Ou Hopland and New Hopland, there are many stray dogs, and they move into town.

“People mostly want dogs for protection,” says van Taak, “but many don’t know how to look after them, or resent having to feed them.”

Van Taak is preparing to service holiday homes as we speak; it’s her only paid (and seasonal) work, after which she has to collect a consignment of pet food for the animals in CLAW’s care, before the shops close for the holidays.

She says that although this has been a public health crisis, the area’s veterinary needs are serviced by a private Vredendal vet, Dr Nico Degenaar, who sees “patients” for two hours on Tuesdays and Thursdays.

CLAW uses Dr Annelize Roos for its community sterilisation drive projects. Roos has been working as a vet since 1984, and since 2009 in dog population management under the banner of EnviroVet CVC (community veterinary clinic). Like Degenaar, she charges “welfare prices”.

Speaking from Calvinia at 9pm after the first day of a three-day sterilisation drive that saw her team sterilise over 100 dogs, she says only 8% of animal owners in this country can afford to go to a private vet.

“Ninety percent go to welfare organisations, and that 90% covers 27% of the surface population of SA. The other animals have no access to health care.”

Citrusdal, says the experienced vet, is relatively secure from distemper.

“One vaccination at the correct age – 16 weeks – and the dog is unlikely to ever get distemper.” She recommends that dogs get vaccinated every two years, as it depends on how many viruses they are exposed to.

She explains how Clanwilliam’s geography, close to the N7, allows for the frequent movement of dogs. “Just one with distemper passes it on, and it’s like a veld fire starting.”

Speaking to Mitchell and Van Taak at different times over weeks, it sounds like they have been fighting their own fire since November. Mitchell says the volunteers at CLAW have had their emotional and mental boundaries stretched over this period.

In a week when CLAW had already vaccinated 155 animals belonging to households that could not afford medical care for their animals, 33 dogs had to be euthanised.

“Our volunteers found bodies dumped in the streets and in people’s yards,” says Mitchell. She says they requested help from the municipality to bury animals that may have to be put to sleep due to illness or suffering, and were assured that holes would be dug – but that they would “have to bury the animals ourselves”.

But no holes were dug. Volunteers were told that the council’s mechanical digger was broken.

This is not the first time they have struggled to bury dead and infectious animals.

A CLAW spokesperson says they used to phone the municipality two months before a vaccination project, “then one month, two weeks, one week, two days, then every few hours on the day… and still the bodies were not removed”. This resulted in decomposing bodies at the location used, “sometimes two weeks after a (vaccination) project, which is a health hazard”.

Sterilisations in the nature reserve

Van Taak says they arrange a “steri-drive” twice a year, costing about R80,000, for 210 dogs and 88 cats, but that finding a location has become a problem.

“For 15 years we used the agricultural grounds, but as the municipality was in arrears, there was no power – lights and water were cut off.” She says they ended up using the kitchen at Ramskop Nature Reserve to perform the sterilisation operations “for free”. Dogs and cats waited in cages in the toilets.

“Dogs in post-op lay in the cold, covered by blankets. Between 8 and 10 November we put 38 dogs and feral cats and kittens to sleep.”

Roos says “municipalities are responsible for dead carcasses” but that they are “simply non-responsive… but it should be in their budget”.

Multiple attempts by CLAW and Daily Maverick to make contact with Clanwilliam’s newly-appointed mayor to comment on the situation have failed.

Roos says “Jeanine (Mitchell) is one of very few animal welfare workers who has raised funds for vaccination against distemper… she is remarkable”.

Mitchell, laid low with her second bout of Covid at the time of writing, runs a straw-bale guest lodge on the Doring river with her husband Bill, on the far north-western edge of the Cederberg. Van Taak says she remembers clearly how Mitchell rescued a starved greyhound (pictured) from certain death.

“She had been starved so her stomach had stopped working, and the tip of her tail had to be amputated. Jeanine sat with her, on sheepskin because her skin was raw, and fed her chicken broth through a syringe every 20 minutes for a week, to get her strength up so she could eat.”

Van Taak says the dog was homed by a Cape Town family who already have Italian greyhounds. Now named Coco, she has her own bed and a bright red collar.

While telling me that Clanwilliam’s infection numbers “are up and down”, van Taak says Jonas’ puppy also survived.

Distemper is avoidable if animals are vaccinated early, says Roos – three months being the ideal age. She says that older dogs, especially in the poorer areas, must be brought to be vaccinated, even before the first sign of sickness.

Citrusdal has achieved 70% herd immunity, says Dr Roos, “and is in a much better position”.

Any Clanwilliam pet owner worth his or her pellets will be hoping that the municipality gets involved, and that together with animal welfare volunteers can work to avoid even more dog deaths next year. DM/OBP

Virus has swept through Western Cape town of Clanwilliam, causing death and suffering to dozens of dogs