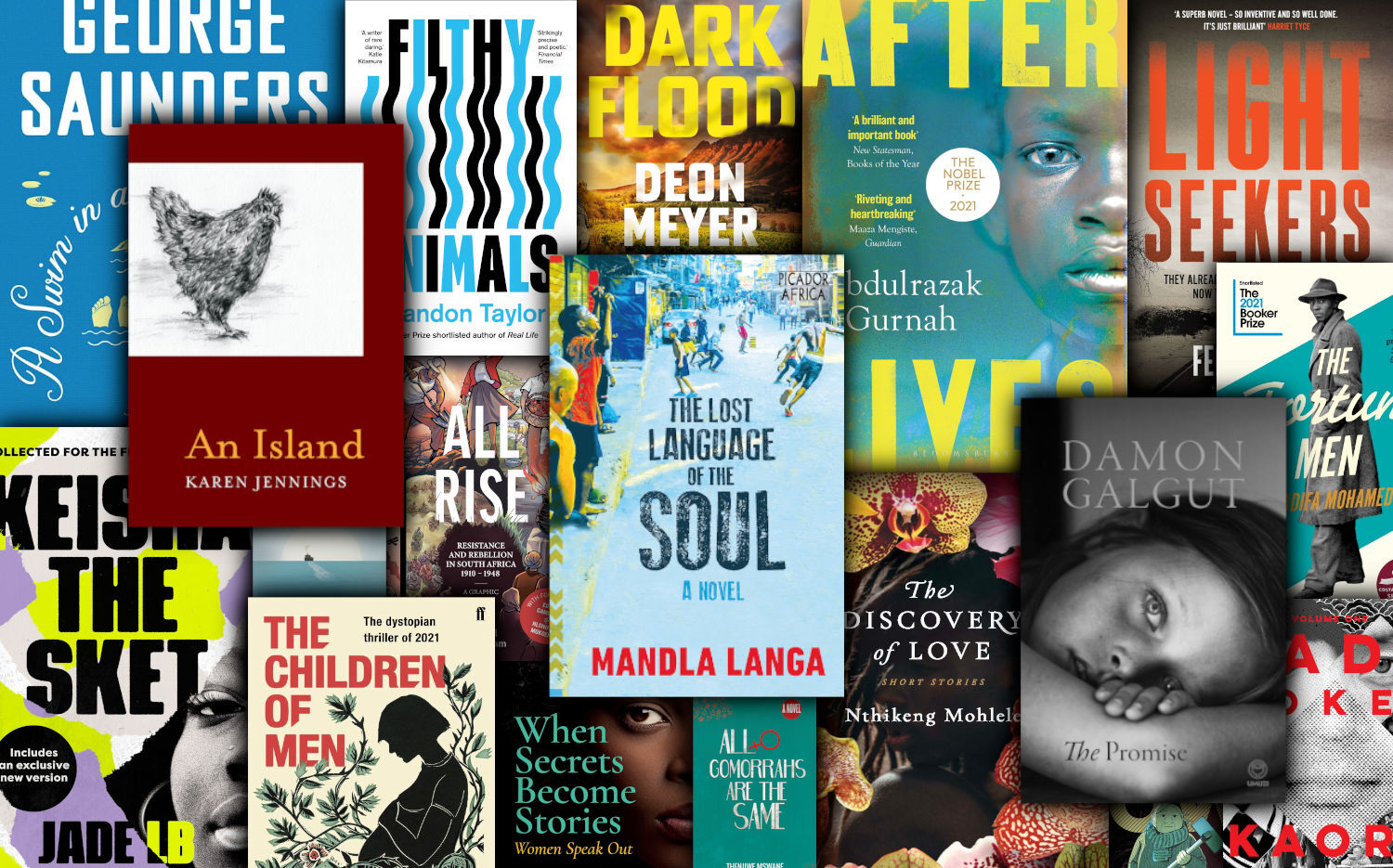 Good news, everybody! It’s still possible to travel to faraway places, from the comfort of your own couch. Put your seat back and take off with this selection of top reads.

Book of the year

“If I disappeared, I’d expect my children to search for me high and low. A mother disappearing goes against the laws of nature. Fathers disappear all the time; it’s their specialty.”

The Lost Language of the Soul by Mandla Langa is our book of the year. One of South Africa’s most highly regarded authors, Langa’s latest is possibly his best. Lost Language tells the story of teenager Joseph Mabaso, the son of a freedom fighter, a boy used to his father’s long absences. But when his mother disappears, he knows that something is terribly wrong. Not for nothing did acclaimed author Zoë Wicomb call this book “a tremendous achievement”. Get a copy, stat.

An Island by Karen Jennings. The small-press wonder of 2021, this exquisitely wrought novel was longlisted for the Booker Prize.

Damon Galgut’s The Promise – winner of the aforementioned Booker – is the darkly comic story of a white South African family living on a farm outside Pretoria.

Real Estate, the “living autobiography” by Deborah Levy, the acclaimed British writer who was born in Johannesburg. A thought-provoking, witty, intimate meditation on life.

The Fortune Men by Nadifa Mohamed. Based on the story of a Somali seaman who became the last man to be hanged in Wales, wrongfully convicted of murder, in 1952. ​​

A Swim in a Pond in the Rain: In Which Four Russians Give a Master Class on Writing, Reading and Life by George Saunders. A literary master class on what makes great stories work.

Harsh Times by Mario Vargas Llosa. A story of international conspiracies and conflicting interests in the time of the Cold War, the echoes of which are still felt today.

Perennial bestseller that you should finally get round to

Children of Men, the classic of dystopian literature written by PD James in 1992, which imagines a terrible future… set in 2021.

Crime for the beach

Lightseekers, the first in a new series by Femi Kayode. Both a thrilling mystery and an atmospheric portrait of contemporary Nigeria.

April in Spain. Not the first crime novel from the notoriously snooty John Banville, but the first he’s deigned to publish under his own name.

The Rabbit Hole by Mike Nicol. Cabinet ministers. Tenders. The State Security Agency. Sordid South African stakes that are so high it’s only a matter of time before the killing starts.

The best Wilbur Smith to start with

The globally bestselling author died in Cape Town in November. Start at the very beginning, with When the Lion Feeds, his 1964 debut novel, banned in South Africa for its “outrageous” subject manner, including “promiscuity, passionate love scenes, sexual intercourse, obscene language”. Say no more.

Graphic novels to lose yourself in

The Waiting by Keum Suk Gendry-Kim (translated from Korean by Janet Hong). Tells the powerful story of a family separated by war.

Shadow Life by Hiromi Goto (illustrated by Ann Xu). A 76-year-old widow quietly rebels against her fate, trapping death in a vacuum cleaner.

All Rise: Resistance and Rebellion in South Africa. Six true stories of resistance, each illustrated by a different South African artist, highlight the struggles of ordinary people.

Take a look at these underappreciated gems.

Gentleman Overboard, a black comedy about a Wall Street banker who falls overboard while travelling on a freighter, halfway between Honolulu and Panama.

Keisha the Sket – Jade LB was a teenager in the early 2000s when her stories about growing up poor and black on the estates of Hackney in London went viral through email and texts. Now her iconic coming-of-age story is in print for the first time.

The Discovery of Love by Nthikeng Mohlele. New stories from one of South Africa’s masters of the short form.

Filthy Animals by Brandon Taylor. Linked American stories that tell of fierce longing for intimacy and the desire for love in a world that seems, more often than not, to withhold it.

All Gomorrahs are the Same by Thenjiwe Mswane. An epic tale narrated through the eyes of three women that brings the reader into complicated generational conversations within black families.

Non-fiction to open your eyes

When Secrets Become Stories: Women Speak Out, edited by Sue Nyathi. Women reclaim their power through writing, and encourage others to do the same.

In the Eye of the Wild, the anthropologist Nastassja Martin’s fascinating, mind-altering memoir about terror, pain, endurance, self-transformation – and run-ins with bears.

Empire of Pain: The Secret History of the Sackler Dynasty. Patrick Radden Keefe’s account of the Sackler family, whose reputation was destroyed by OxyContin.

(Not) Lost in translation

Lang pad onnetoe, Nathan Trantraal’s award-winning Afrikaans translation of Long Way Down, the acclaimed YA novel by Jason Reynolds, the US Library of Congress’ National Ambassador for Young People’s Literature.

Top audiobooks of the year

This Much Is True by Miriam Margolyes, narrated by the author, who was the first woman to say “fuck” on British TV. Her extraordinary life story is far richer and stranger than any part she’s played.

The Krugersdorp Cult Killings by Jana Marx, narrated by Nicole Engelbrecht (English) and Bouwer Bosch (Afrikaans). Do not listen before bed.

The Dictionary of Lost Words by Pip Williams, read by Pippa Bennett-Warner. Set during the height of the women’s suffrage movement, the book reveals a lost narrative, hidden between the lines of a history written by men.

Wish You Were Here by Jodi Picoult. Both the most innovative and the most readable work to come out of our season of pandemic lit.

Abdulrazak Gurnah’s Afterlives tells the interlinked stories of friends and survivors in Tanzania under German colonial rule. The Zanzibar-born novelist was awarded this year’s Nobel Prize in Literature. DM/ML