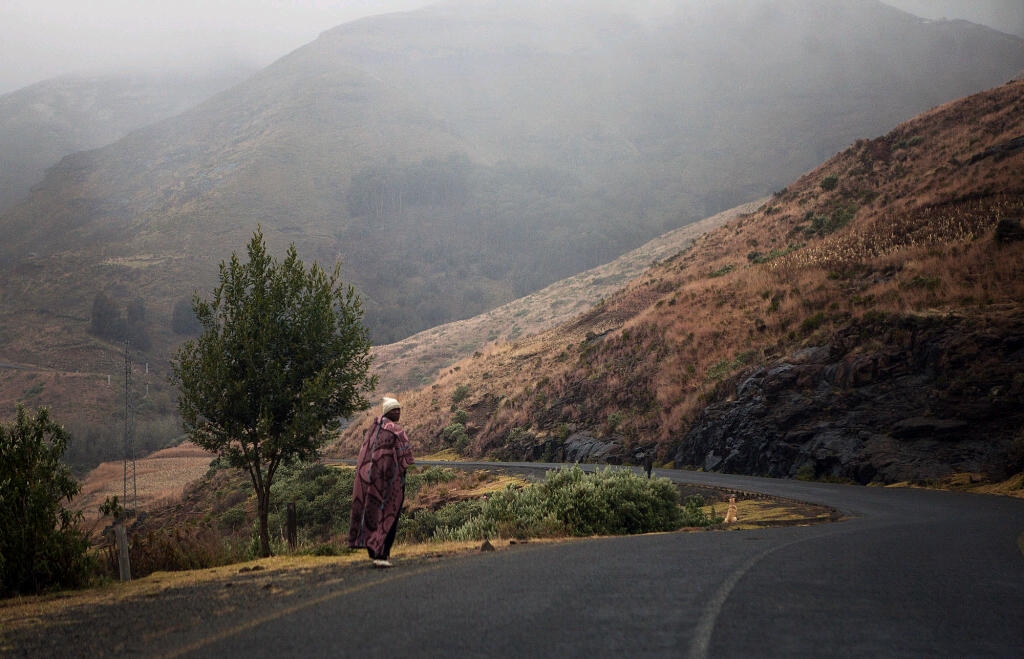 A pedestrian walks along the street in Lesotho, at the foothills above Afriski. Snow on the Maluti mountains caused cold weather to hit South Africa. (Photo by Gallo Images/The Times/Marianne Schwankhart)

Zakes Mda is one of South Africa’s best-loved novelists – though he is also a celebrated playwright, children’s book author and an increasingly visible painter. His latest novel, Wayfarers’ Hymns, is at once full of drama and mirth, set in Lesotho and playing out in the bloody world of famo musicians. At a launch of the book at the University of Pretoria, Dr Nokuthula Mazibuko-Msimang interviewed Mda about it. This is an edited transcription of that interview.

Nokuthula Mazibuko-Msimang: I was intrigued that yes, you talk about the culture of Basotho and the instruments of Basotho, but not in the way that you’ve done before, as a kind of healing salve to our colonial oppression and apartheid and so on. This is a different ballgame. Tell us a little bit about what inspired you. And about the process of writing this book about musical gangsters, really.

Zakes Mda: This book is centred around famo music. Which is a genre of music in Lesotho. Very popular there, predominantly the instrument there is the accordion, it used to be the concertina before. So Basothos have taken the concertina and the accordion and turned them into Sesotho traditional instruments. And it’s a kind of music that’s full of poetry. And the poetry is known as hymns, difela, but these are secular hymns, they are not religious hymns. And so that is why the title is Wayfarers’ Hymns.

Wayfarers are travellers. The title comes from the Sesotho name of the genre, it’s difela tsa batsamai, which means the hymns of those who traverse the land … Now, I grew up knowing this music because I grew up in Lesotho. But it’s only recently that I learned new things about it, which are recent developments, gang wars, the wars, amongst the gangs that are led by musicians themselves.

So these musicians have evolved into gang leaders. And every weekend in Mafeteng, which is a district in Lesotho, there are their funerals of musicians who have died in these wars, of their followers, of the chorus boys and so on. Fighting for territory, fighting for followers, but also fighting for illegal mining.

The illegal mining that happens here in Gauteng, in Welkom and so on, is actually led by the musicians, the leaders of these gangs. So I was fascinated to hear of this because I’ve never read about it, even in the newspapers. Sometimes you will hear that four zama zamas, by which they mean the illegal miners, were found dead on the roadside or something like that. And they never dig deeper, who were they, why were they there? And then right into the fact that the mining operations, the illegal mining operations are actually run by syndicates of Basotho musicians. They are fighting over these territories as well.

And indeed, when you listen to the music, I mean, it’s beautiful, it’s healing, with wonderful poetry, but it engenders a lot of death. You know, which is a contradiction in terms. I think that’s what fascinated me to write a novel set in this community of famo music, examining the culture that gave birth to it, the culture of the old MaRussia gangs, the Russian gangs of the 50s. And then up to the contemporary musicians, because you see, you trace the ancestry of the current famo musicians to those early MaRussia gangs.

Nokuthula Mazibuko-Msimang: Scholars of African literature will know about the history of the MaRussia. And I grew up in Soweto, in Pimville. So MaRussia were really big in Pimville. We all knew even as children, that, you know, when you see a Mosotho with a blanket … It might be an AK47 under the blanket.

Zakes Mda: We know difela, the wayfarers hymns, as melodic, it’s so deceptively beautiful and calm, you know, but there is this kind of underbelly.

Nokuthula Mazibuko-Msimang: And very elegantly done. The way you balance dramatic and sometimes very difficult issues, to do with race, to do with land, to do with economic freedom, but it’s tempered with humour. But specifically in this book, the issue of the toxic masculinities, the whole persona of the mine worker, you know, o sebetsa dimaineng don’t be a layabout, go and be a man and work in the mines, and the cost of that to the individuals and to the community. Talk to us about that, because in the past, you’ve spoken about strong women, but now you seem to be shining a light more on the many layers of masculinities.

Zakes Mda: Yes. But even then, I still talk about strong women. But even there, it is not something that is preplanned, that this woman has to be strong, this man has to be toxic, and so on. The story takes me there. And the story is informed by the culture of the setting. The strong women don’t come from my imagination … “Oh, I wish there were strong women in the world, okay, let me create them in my fiction.” It is because in the environment that I’m writing about, they are there. In many instances, they’re the people who drive life in those environments. And therefore, they drive my story. The toxic environment of the men, in the setting of the wayfarers, this is one novel which is much more informed by the reality, than any other of my novels.

The story itself is told a lot through the lyrics of their songs, and of their poetry, and those lyrics are full of that toxic masculinity that you are talking about. Because they are lyrics of war, and they challenge one another. And they do in Sesotho what is known as ho kobisa which means, you know, talking obliquely about each other in an insulting way, even without directly mentioning the names. But when you hear the song, you know that song is about me. And I’m going back to kill those people.

Nokuthula Mazibuko-Msimang: I’ve got a question from one of the people watching: what is the one thing Prof Mda would like to see his books do in African communities? What kind of impact does he hope to achieve?

Zakes Mda: Well, like every writer in the world, you hope that your books will be read, that’s the main reason you write them. And first and foremost, you want them to entertain, because that’s what the intention is. That’s why it is a novel and not a pamphlet of ideas. It’s a novel because storytelling in itself is entertaining and therefore highly digestible and you transmit knowledge through a medium that gives you joy, just the joy of the stories itself …

But of course, there is no writer in the world who will be loved by everybody. There will be those who will love your work. There will be others who will say it’s so-so, it’s mediocre, but okay. And there are others who say, this is awful. That’s what we live with as artists in all the arts. DM/ML

Nokuthula Mazibuko Msimang is an Artist in Residency at the University of Pretoria.