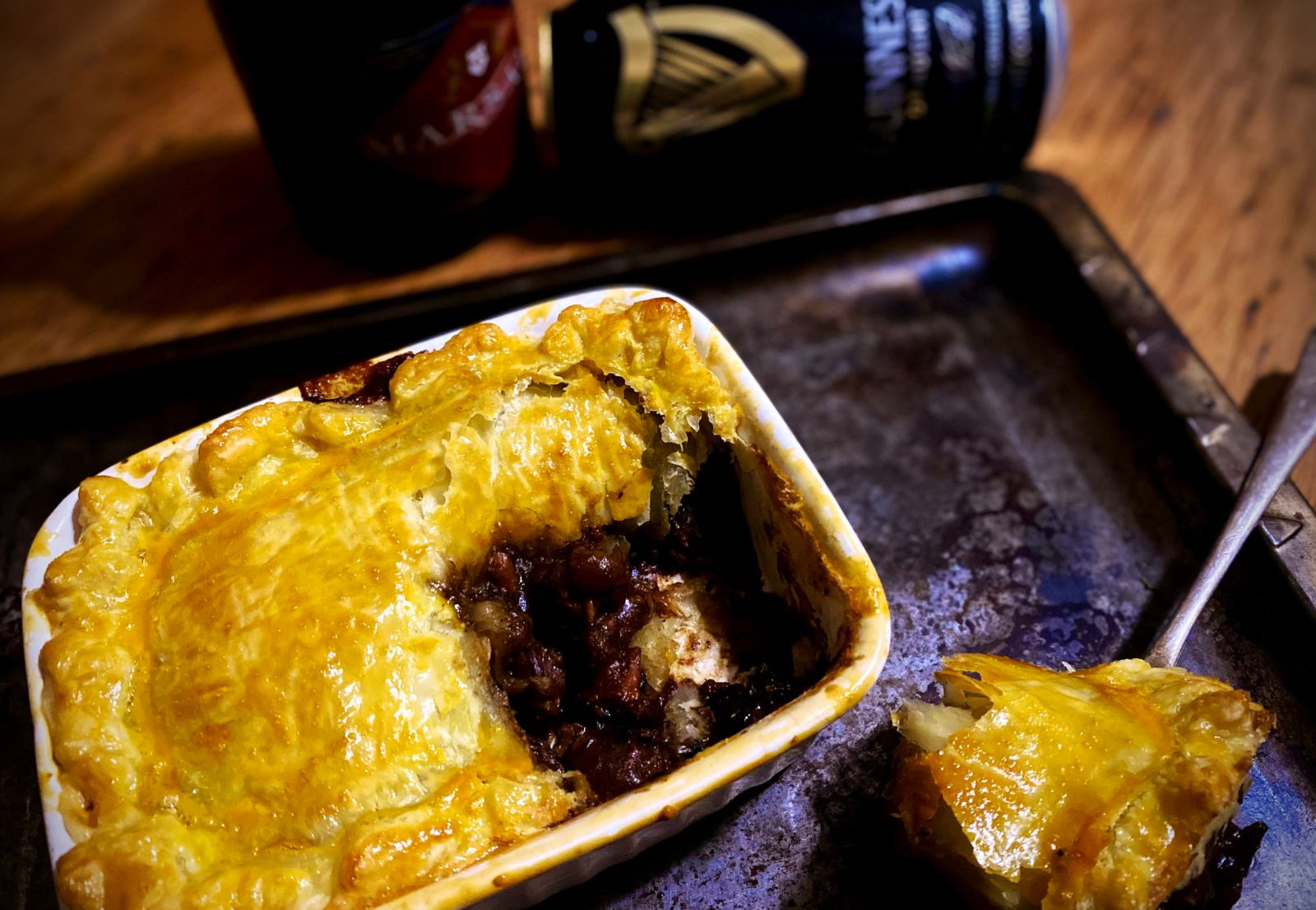 This week, before TGIFood goes into festive hibernation until January, we’re revisiting the most popular recipes of the year. From April, here’s our Beef & Guinness pie. Transport yourselves to a British pub with this favourite packed with deep, satisfying flavour. I made it from the heart and from ‘palate memory’ from my time living in West Sussex.

This recipe came out of one of those circumstantial situations where I’d made something that required a couple of tablespoons of Guinness and then thought, what do I do with the rest of it? Not given to drinking at breakfast time (nothing alcoholic passes before the “Boeing goes over” late afternoon, as our grannies and aunties used to say), but it needed to be used.

Then I remembered your classic beef and ale, beer or stout pie and also remembered that once upon a time I had made one, but it was way too bitter, because the bitterness in beer strengthens while being reduced. The problem with cooking with any bitter beer is that the bitterness transfers to the dish you’re cooking… unless you counter it with something sweet. To achieve a bitter/sweet balance, you could add port, sherry, perhaps even a chocolate or coffee liqueur… or, as I did, Marsala, the Italian fortified wine produced around the Sicilian city of Marsala, hence the name needing a capital. You do get dry Marsalas, but that of course would not do.

I also used bacon, because what harm can bacon do in almost anything, and there had to be some old-fashioned English mustard in there too. What a success it turned out to be; you’ll want to try this recipe, promise.

400 g lean beef, the meat cut into small pieces, but do not use the fat (it can be frozen and kept for a beef stock)

440 ml Guinness (give or take a couple of tablespoons)

Sauté onion and garlic in olive oil until softened, then add sage and chopped bacon and simmer, stirring, until bacon is cooked through.

Add the Guinness and Marsala and stir in the mustard. Season to taste with salt and pepper.

Add the beef and bring to a simmer, and cook it on a very low heat until the meat is very tender. Depending on the cut of beef you use, this could be in half an hour or more to anything like two or even three hours. So, if it’s a tougher cut, you’re likely to need to top up the liquid with a little boiling water, return it to a simmer, and continue cooking. The cut I used was tough, so I topped it up two or three times in this way. It’s not a problem; as it cooks down again, all the flavour will slowly return to its best strength.

When the beef is tender, thicken the liquid if necessary by stirring into it some cornflour mixed with milk or water and stirred until the sauce thickens nicely. Taste and adjust seasoning if needed.

Roll out the puff pastry. Grease a suitable pie dish (or smaller dishes) and spoon in the filling. Top with pastry, cut a little bigger than the size of the dish. Pull the edges in and crimp with two fingers, all round. Brush egg yolk over the top and bake in a preheated 200℃ oven for about 20 to 25 minutes or until the crust is crisp and golden brown.