The ethics of eco-sabotage: Is it ever worth blowing up power stations in an act of environmental activism? 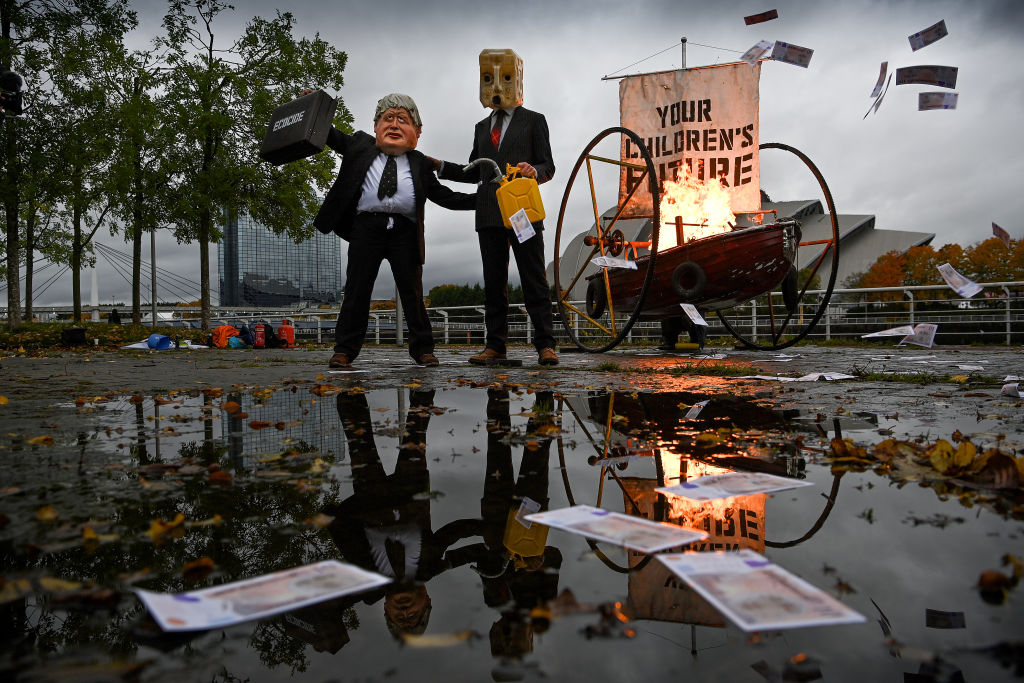 Activists from Ocean Rebellion set a boat alight next to the River Clyde, opposite a COP26 venue in Glasgow on 27 October 2021. (Photo: Jeff J Mitchell/Getty Images)

Meant to veer humanity decisively off its current accelerated trajectory to a much warmer world, delegates flew back home from the COP26 in Glasgow with only a tepid outcome. In this context, questions are being asked anew about the role that sabotage could play in environmental activism.

‘I am in favour of destroying machines, property – not harming people. That’s a very important distinction.” These were the words of Andreas Malm, a climate activist and senior lecturer at Lund University in Sweden, on a podcast where he argued that the climate movement should rethink its roots in nonviolence.

In his book, How to Blow Up a Pipeline: Learning to Fight in a World on Fire, Malm agitates for fossil-fuel infrastructure’s “intelligent sabotage” to prevent more carbon from being emitted into the atmosphere.

The basis of Malm’s argument has been given a jolt of urgency with the most recent accounting of the science. The most recent Intergovernmental Panel on Climate Change report reaffirms that the world only has until the end of this decade to avoid the 1.5°C global average temperature increase widely understood to be a threshold at which humanity can expect to experience the effects of dangerous climate change.

Earth is currently 1.1°C warmer on average than before the start of the Industrial Revolution. Every oil refinery, internal combustion engine and coal-fired power plant adds into the atmosphere a mixture of gases that raise this average temperature.

Meant to veer humanity decisively away from its noxious trajectory to a much warmer world, delegates flew back home from the COP26 in Glasgow with only a tepid outcome. In this context, questions are being asked anew about the role of sabotage in the environmental activism space.

But just how strong – philosophically – is the case for blowing up pipelines and power stations to save the world? The philosophers and ethicists DM168 spoke to had their reservations.

“As you note, the timeframe in which the world must reorient the energy basis of the global economy is short. Global emissions should sink to net-zero by around mid-century to achieve a warming limit of 1.5°C, and to be on track for that, they should fall by nearly 50% by 2030. Moreover, efforts are currently not on track,” said Darrel Moellendorf, a professor of international political theory and philosophy at the Research Centre Normative Orders of Goethe University in Frankfurt, Germany.

“The fossil fuel industry of several countries exerts an enormous and distorting influence on policy. In democracies, lobbying and funding by the industry exerts influence on representatives.

“It is imperative to the climate justice movement in democratic countries to exert counterpressure on that industry. That will require mass mobilisation and serious strategic thought about movement building. The question of sabotage occurs within that context.”

Moellendorf continued: “Now, I assume the discussion is limited to the intentional destruction of property, without foreseeable loss of human life.

“The question that is central to this context is: how could or would such property damage contribute to the building of a mass democratic movement for climate justice, a movement capable of countering the power of the fossil fuel industry?

“If it doesn’t so contribute, if it merely delays pipeline construction, but does not contribute to halting it, then it makes no lasting effort to the solution and is merely symbolic violence.

“Moreover, any time violence features in a political movement, there is the danger that the result will be demobilising, as the conditions for those who wish to demonstrate could become more dangerous in turn. These are the key strategic considerations when discussing sabotage of this kind.”

Professor David Benatar is the head of the philosophy department at the University of Cape Town, where he also directs the university’s Bioethics Centre. An article in The New Yorker described him as “the world’s most pessimistic philosopher”, but in a conversation with DM168 he was not so pessimistic as to see a rational basis for eco-sabotage.

“I don’t think you’re going to be easily able to justify that kind of action… My general view is that there is a very strong presumption against resorting to violent means and in democracies to resort to illegal means,” he said.

In a thought experiment, DM168 played the role of someone agitating for sabotage of fossil fuel infrastructure, and Benatar provided his informed response.

Benatar responded that “the question is whether this so-called direct action is going to produce the good that it is purported to produce, and I think that’s extremely unlikely. I think it’s likely to cause a lot of misery in the short run; it’s also likely to harden rather than soften the attitudes of people who are sceptical about climate change, and I do not think it will have the desired effect.”

He continued that “some of these actions may actually be damaging to the environment. You blow up pipelines, [and] you can have leakage of dangerous materials into the environment. If you blow up power stations, you can have further negative effects on human wellbeing, and so I don’t think that the broadest picture is taken when people advocate this kind of violence.”

Michaela Weiffenbach, a PhD candidate in the environmental ethics space, offered DM168 an academic perspective, saying that “acts of eco-sabotage aim to dismantle existing power structures and reduce the harmful effects caused by climate change. However, one of the most ancient and fundamental ethical, philosophical questions is what is ‘the good life’. Knowledge of ‘the good life’ is indispensable to normative ethics and distinguishing right from wrong action.

“Eco-sabotage runs the risk of paternalism as it ascribes to others a particular conception of ‘the good life’ and promotes the good of others [acts of eco-sabotage] prior to any agreement or consent. It is philosophically relevant to know whether (1) it is possible to know what is intrinsically good (or bad) for us, (2) and if one can be morally justified in promoting the good of others.”

Johan Hattingh, a professor of philosophy at the University of Stellenbosch and head of the Unit for Environmental Ethics, shared his opinion with DM168.

“Personally, I do not think violence and sabotage is the way to go. It will just add to the oceans of violence we already have in this world, resolving nothing really and only giving the holders of power in the world an excuse to consolidate their positions with more violence.

“If a radical position in climate ethics compels us to get rid of the causes of climate change, we can achieve this in a much more effective way with passive resistance, like that of Mahatma Gandhi, by not playing the globalist-consumerist game any longer. I think there are enough people in the world able to do so, and perhaps even more who would be willing to do so if they only had the means,” said Hattingh.

“The change we need is more people who can say no to the frantic activisms we see all around us in the world; we want less of it, not more. Another bomb or another spike in a tree or on the road would just add to the violence; it will not break it.”

The Elizabeth Margaret Steyn Foundation’s executive director, Michele Pickover, told DM168 that “something needs to be done to reverse the accelerating pace of the destruction of our planet”.

“We need a just peace with nature. Although we may not agree with their direct action tactics, they are speaking truth to power and essentially governments and corporations are ignoring their message of environmental crisis, not only at their peril but also our own.” DM168

The ethics of eco-sabotage: Is it ever worth blowing up power stations in an act of environmental activism?