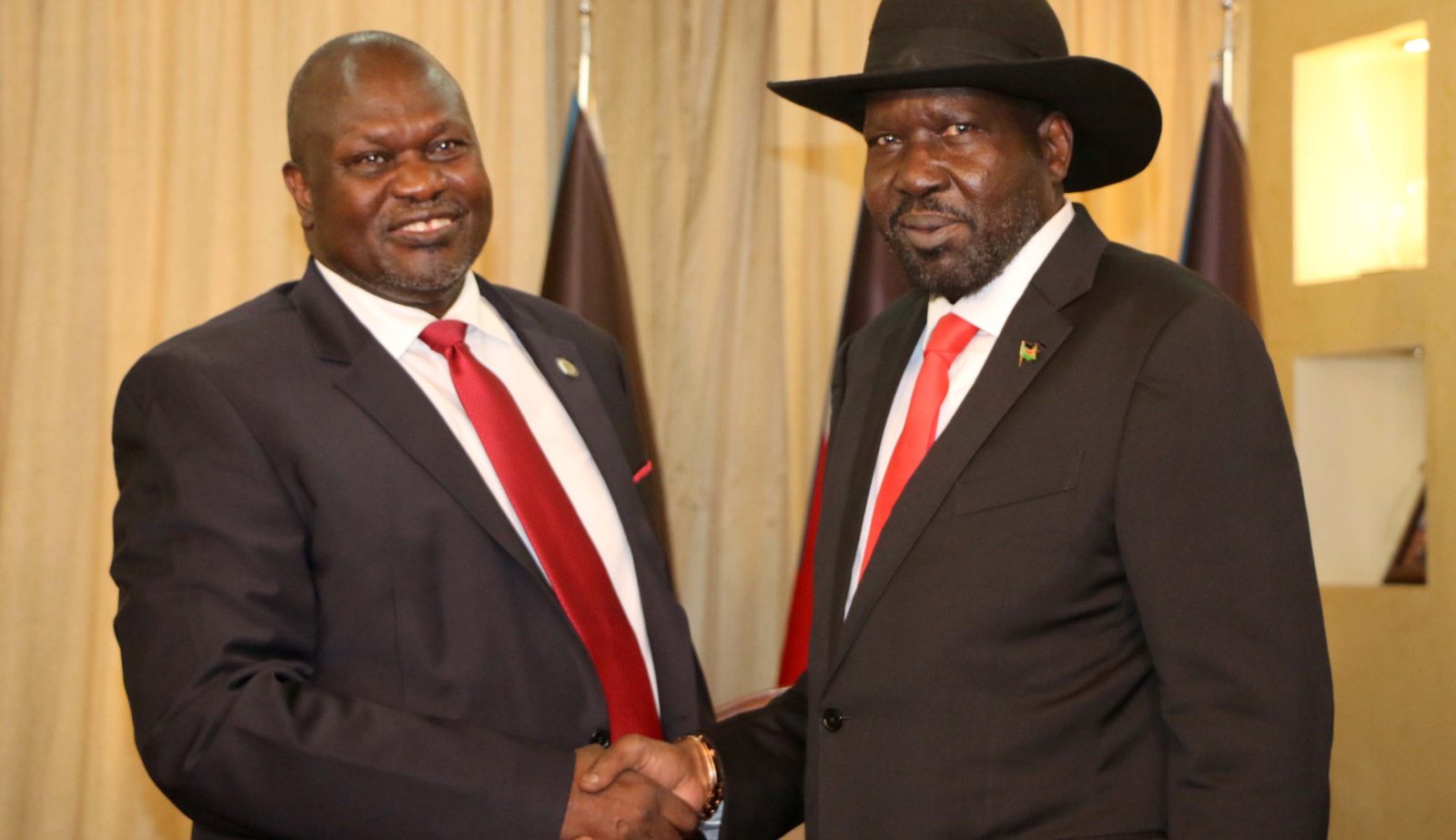 Just a year before elections, most of the tasks of the unity transition remain undone.

In February 2022, South Sudan’s transitional unity government will be two years old, with just one year remaining to achieve the goals set out in the 2018 ‘revitalised’ peace agreement.

Although a fragile ceasefire is largely holding and some progress has been made towards implementing the agreement, most of its tasks remain undone.

“The transition has been crippled by political disputes, corruption, inter-communal conflicts, a deteriorating humanitarian situation and a shrinking economic base,” Emmaculate Asige Liaga wrote in a recent Institute for Security Studies (ISS) report. Liaga is an associate post-doctoral researcher at the Centre on Conflict, Development and Peacebuilding, Graduate Institute, Geneva.

The problems she mentions — largely emanating from the bitter personal enmity between President Salva Kiir and now first Vice-President Riek Machar — have caused the huge delays in the agreement’s full implementation. And implementation remains far from certain, on any timetable.

Liaga’s report notes that when the transitional unity government was formed in February 2020, with Kiir and Machar (finally) in their posts, only seven of the 63 pre-transitional tasks set out in the peace agreement had been completed. The rest were carried forward into the transition.

In an ISS seminar, “The clock is ticking on South Sudan’s transition”, earlier this month, Liaga noted that the 2018 agreement was meant to be a roadmap to a peaceful, democratic and prosperous South Sudan. It was meant to recover the commitment of the 2015 peace agreement. This fell apart when fighting broke out between Kiir’s and Machar’s forces in July 2016 when the latter returned to Juba to resume his vice-presidential position.

Assessing the requirements of the 2018 deal, Liaga noted that radical reforms towards financial transparency, security and governance were meant to be happening in the transitional government. Devolution of power and resources from the central state to local government was also supposed to be underway. The government should have been expediting the return and reintegration of forcibly displaced members of South Sudanese society.

The government should also be facilitating a people-driven process of national reconciliation and healing, conducting a population and housing census and establishing a competent and independent national electoral commission. This commission should be conducting a free and fair credible election before the end of the transitional period — which technically should be within the next 12 months.

Ticking the scorecard, Liaga said the peace agreement had reduced the incidence and intensity of the civil war — though, to some degree insecurity had just been devolved from the centre to the peripheries. The relative peace should nonetheless help the parties in the government to work together to accelerate the implementation of the peace agreement’s many outstanding tasks.

She noted that most of the government structures, at least at national and state level, had been established — though, establishing local government was proving to be challenging, and this was stirring grievance over lack of service delivery. This could be another spark of renewed violence.

Most of the more problematic laws that had been amended to comply with the 2018 agreement had been passed by the council of ministers and were ready to be passed by the transitional national legislative assembly.

He commended Machar for his courage in returning once again to participate in government despite the threats to his life in 2013, when the civil war erupted, and again in 2016 when fighting re-erupted at the presidential palace in Juba.

Tessema was also encouraged by the formation of the transitional national assembly, as well as the confinement of forces on both sides, for over two years already, to training and cantonment camps — despite terrible living conditions in those camps. Garang Yach of the Juba and Johannesburg universities was not as sanguine about the cantonment, though, noting that only 3,000 out of 300,000 troops remained in the camps.

Tessema however noted that the further delays in the already long-delayed integration of all the different military forces into a single national army could shatter the fragile peace. The main obstacle was that Kiir wanted the force to be divided 60:40 between government and opposition troops while Machar and the other parties demanded a 50:50 split.

Liaga said another threat to security were the three main holdout groups — the Real-Sudan People’s Liberation Movement, the South Sudan United Front and the National Salvation Front, which had refused to sign the 2018 agreement. She welcomed Kiir’s call for negotiations in the Sant’Egidio process to bring them on board.

Tessema added to the negative column in the balance sheet: weak or non-existent state institutions, a bloated transition government consuming scarce resources, ‘rampant’ corruption and a power struggle among parties in the transitional government. He also added a polarised elite and society because the conflict had ethnic undertones, many internally displaced people and refugees, a lack of infrastructure and a democratic culture, and large ungoverned spaces in the country. And to top it all, a region in turmoil.

Clearly, the negatives far outweigh the positives in the South Sudan peace and democracy ledger.

Can anything be done to balance the books? Both Liaga and Tessema recommend that the targets for implementation of the 2018 peace agreement tasks be accelerated to keep the election timetable on track. Civil society should step up its efforts towards mediation of local conflicts, they say.

And Igad should intensify its pressure on Kiir and Machar in particular to accelerate the implementation of the peace agreement.

The timing, though, is unfortunate. Tessema commended Igad leaders for having resolved past deadlocks between Kiir and Machar, over the numbers and boundaries of federal states and on extending the pre-transitional period for the second time.

But he said the rest of Igad was itself now in some turmoil — including the civil war in Ethiopia, a coup in Sudan and border tensions between Kenya and Somalia. This could prevent the regional body from coming to the rescue again.

This may be a moment then for other outside players, such as the African Union, the Troika and the United Nations, to step up to the plate — for fear that the ticking clock could become a time bomb. DM