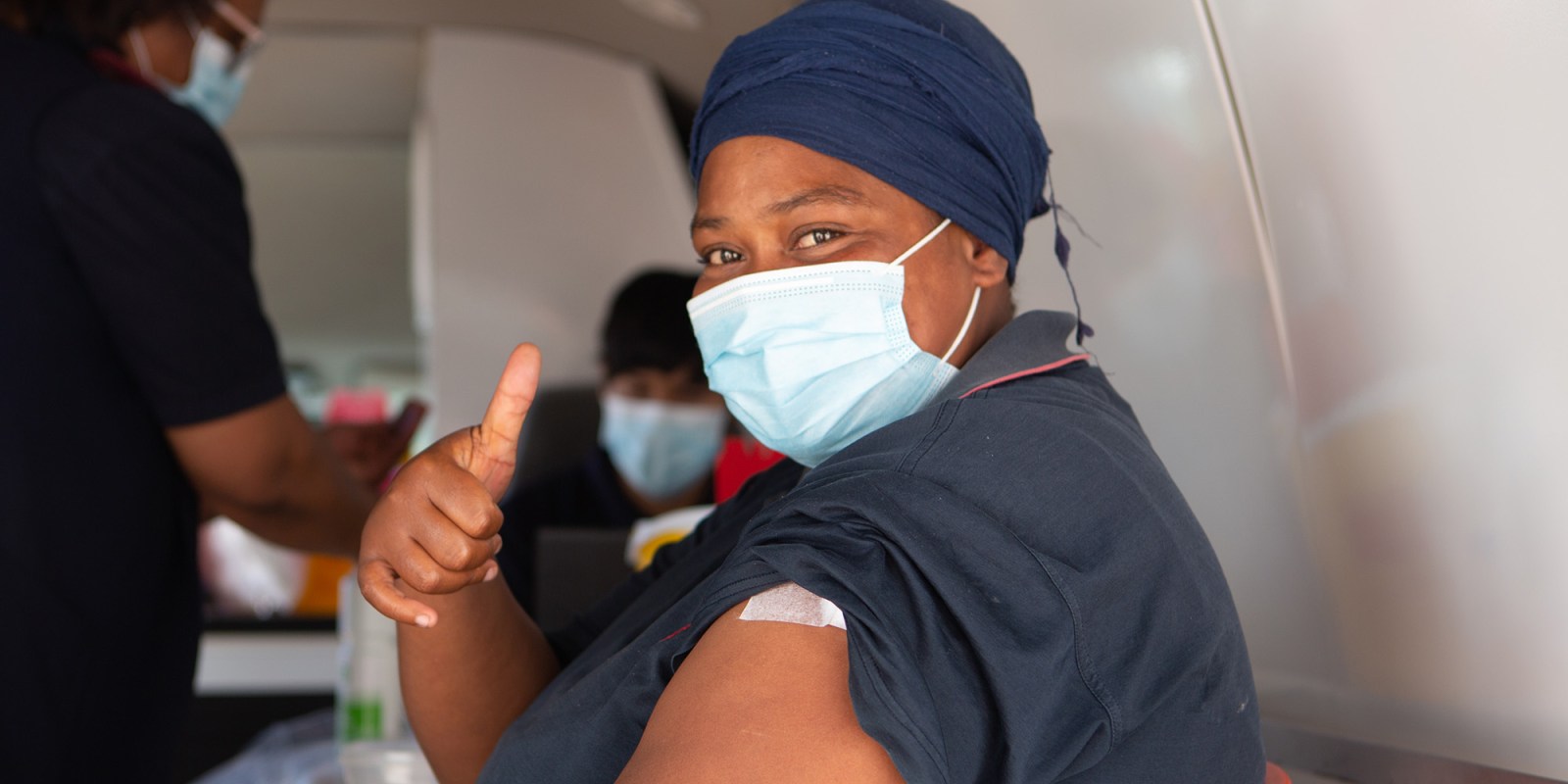 A resident of Pela, Atlantis, after receiving a Covid-19 vaccine at the launch of Vaxi Taxi mobile vaccinations on 7 December 2021 in Cape Town, South Africa. (Photo: Gallo Images / Misha Jordaan)

The Omicron variant now makes up 3% of all sequenced Covid-19 cases in the US, rising from less than 0.1% in early December. Hospitalisations are surging across New York state and New Jersey. Philadelphia will mandate proof of full vaccination to enter bars and restaurants starting on January 3.

Boris Johnson suffered the biggest rebellion since he became British prime minister, as dozens of Conservatives voted against a key part of his strategy to tackle Omicron. Italy will require travellers from other European Union countries to provide a negative Covid-19 test, and Scotland and the Netherlands are tightening restrictions. 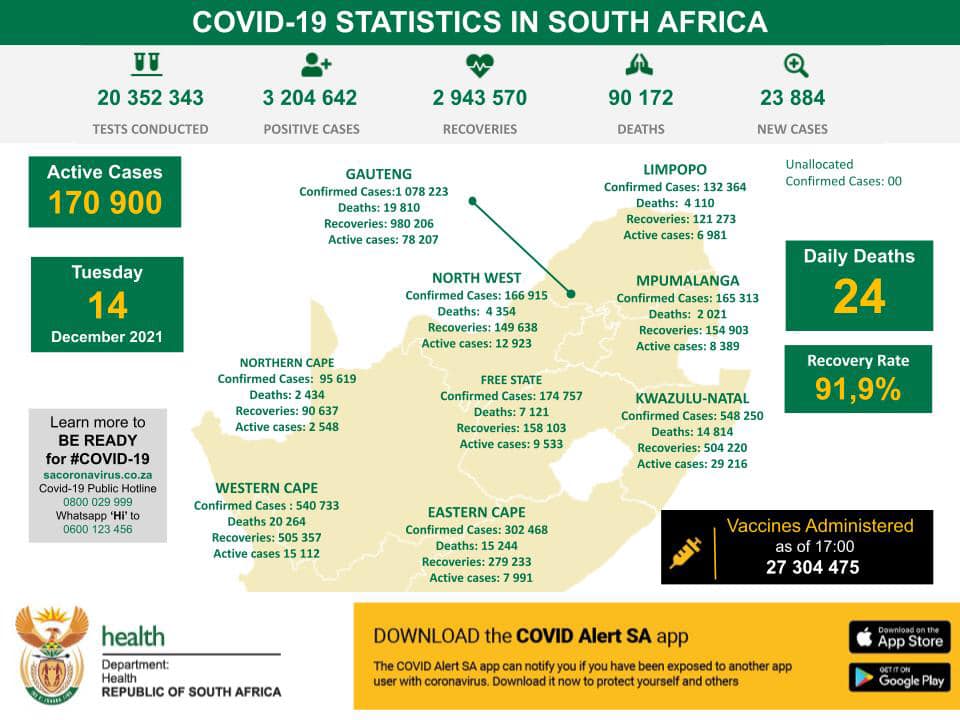 New Jersey’s hospitalisations for Covid-19 have doubled since Thanksgiving. The state reported 1,698 patients on December 13, up from 842 on November 25.

While most of the new Covid-19 cases are among the unvaccinated, an increasing number in recent weeks has been among those who have completed their primary vaccine course and are dealing with waning immunity, Governor Phil Murphy said at a virus briefing on Monday.

The evening lockdown in the Netherlands will be extended to January 14, Prime Minister Mark Rutte said. That means all shops except supermarkets, restaurants and bars will continue to close after 5pm. Also, people are advised to have a maximum of four people visiting them at home during Christmas. School will be closed from December 20, one week before the Christmas break.

Apple, coping with a resurgence in Covid-19 cases and the new Omicron variant, is reinstating its mask mandate at US retail locations and will proactively limit store occupancy.

The technology giant said it’s requiring masks for shoppers – a rule that had been dropped at about half of its US stores – to “support the wellbeing of customers and employees”.

The mandate goes into place on Tuesday, according to an internal memo seen by Bloomberg News. Unvaccinated employees have been asked to work from home temporarily until “alternative solutions are considered”, according to the memo, sent to staff on Monday. The decision comes after New York state instituted a mask mandate for businesses that don’t require proof of vaccination.

Omicron now 3% of sequenced US cases

The Omicron variant now makes up 3% of all sequenced Covid-19 cases in the US, rising from less than 0.1% in early December, health officials said, a sign of the rapid spread of the new coronavirus version.

The highly mutated variant has now been detected in 33 US states, the Centers for Disease Control and Prevention said in an email. While the Delta variant remains the dominant strain in the country, accounting for 96% of sequenced cases, Omicron’s proportion is expected to increase, agency spokesperson Jasmine Reed said.

Countries around the world are working to respond to the spread of Omicron, a variant that appears to have mutations that may allow it to evade the effects

New York hospital use surges by 70%

New York Governor Kathy Hochul said that Covid-19 hospitalisations across the state have surged by 70% since Thanksgiving, prompting her to institute a statewide indoor mask mandate for businesses without vaccine requirements.

“If I sound a little frustrated, perhaps I am,” Hochul said at a virus briefing on Tuesday in New York City. “Despite our desires to have this behind us, we aren’t quite there yet.”

She said cases per 100,000 people had gone up 58% during that time, while vaccinations had increased by only 2%. She said the state will re-assess Covid metrics on January 15 and urged businesses to comply.

Denmark confirmed more than 1,000 Omicron cases for the first time as the variant is set to become the dominant type of the virus in the Nordic country.

Health authorities had as of Tuesday registered a total of 4,535 infections caused by the variant, up from 3,437 a day earlier, according to a statement. Denmark has Europe’s most rigorous screening programme, with a high level of testing, and variant-screening of all positive PCR tests.

Read more: Denmark’s Omicron surge is a warning to the rest of world

Prime Minister Mette Frederiksen earlier on Tuesday said the variant is spreading “at a fierce pace”, calling it “a serious situation”. By the middle of last week, more than 10% of Covid-19 cases were caused by Omicron, according to the latest report from Statens Serum Institut. Health authorities said on Monday they expect the variant to become dominant in the coming days and that Denmark, which has a population of 5.8 million, is heading for 10,000 daily infections.

Philadelphia, following the lead of New York City, will require proof of full vaccination to enter bars and restaurants starting on January 3.

Food establishment employees and children aged 5-11 will be required to have one dose by January 3 and to complete their vaccine series by February 3. Philadelphia will allow an exception for entry for the first two weeks of the mandate, with people showing a negative Covid test if they aren’t fully vaccinated.

In the past two weeks, 5% of Covid-19 tests in Philadelphia have come back positive. The city is averaging nearly 500 new cases a day, according to a December 13 statement.

The test-positivity rate climbed to 11.5% on Tuesday from 1.6% on December 1, according to the Ministry of Health. While Kenya hasn’t announced a confirmation of the Omicron variant that’s believed to be driving a new surge in cases in South Africa, the East African nation’s government said it’s monitoring the situation closely as the end-year holiday season approaches.

Facing a spike in positive tests for the coronavirus among players this week, the National Football League said in a memo that it would mandate booster shots among team staff who work most closely with players, The New York Times reported.

Even with a vaccination rate among players that is over 94%, more coronavirus cases have been reported this season in the NFL compared with last year, according to a review of league data by the newspaper. The sense of urgency escalated on Monday, when 37 players tested positive, the highest single-day total since the start of the pandemic.

Mauritius extends boosters to those who received J&J vaccine

The Indian Ocean island nation of Mauritius is accelerating the pace of booster inoculation by providing an additional dose to those who received the single-shot J&J vaccine four months ago, according to a statement from the Health and Wellness Ministry.

The extension adds to current J&J boosters being administered to people fully vaccinated with AstraZeneca’s Covishield, Covaxin and Sinopharm. Since last week, all persons 70 or older who have completed those vaccinations are being offered Pfizer as a booster.

As of Tuesday, fully vaccinated people amounted to 906,141, or 71.6% of total population, while boosters have been given to 152,498 persons, data from the ministry show.

Many African countries are failing to identify almost all of their Covid-19 infections, making it difficult to tackle the pandemic, said John Nkengasong, director at the Africa Centres for Disease Control and Prevention.

His institute conducted a survey of about 31,000 people in five countries and found that Uganda was catching one in 80 cases and Togo one in 106, he said on an online conference on Tuesday. That meant that in Uganda 20% of the population has had Covid-19, while 15% of Togo’s inhabitants have been infected with the pathogen.

The Scottish government is tightening Covid-19 restrictions as the Omicron variant takes over as the dominant strain across the UK.

First Minister Nicola Sturgeon said new guidelines will urge no more than three households to mix during the Christmas period. There will be a legal requirement for businesses to take more steps to stop transmission, such as screens and social distancing in retail outlets. It will also be a legal duty for employers to allow staff to work from home where possible.

Italy will require travellers from other European Union countries to provide a negative Covid-19 test, people familiar with the matter said on Tuesday.

The requirement will come into force on Wednesday, the people said, asking not to be named discussing confidential decisions.

Italy is set to extend its government’s emergency powers until March 31 as the country faces a new rise in Covid-19 cases ahead of the Christmas holiday season.

In one study, its treatment, Paxlovid, failed to meet the primary goal of reducing self-reported symptoms in 673 adults at standard risk of developing Covid-19 complications. The drug showed a trend toward reducing hospitalisations in the group by 70%, however.

In a second study, the treatment remained 89% effective in preventing hospitalisations in high-risk unvaccinated people when used within three days of the appearance of symptoms.

The complicated results suggest that the pill remains likely to become a standard treatment for Covid patients at risk of developing severe disease. DM