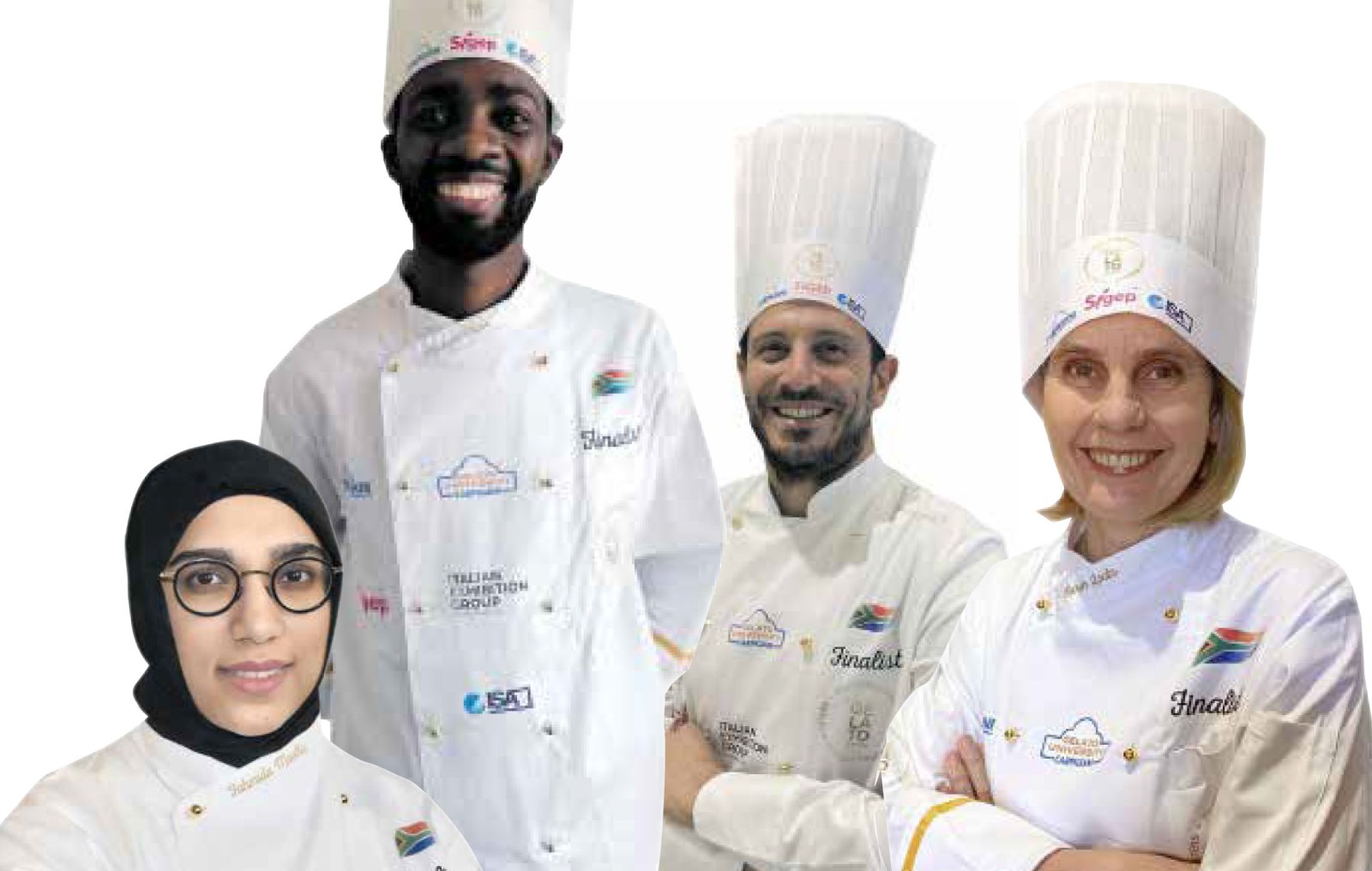 Fahmida Moolla of Gelato Studio in Johannesburg, Michael Dube of Aroma Gelato in Pretoria, Sandro Tomassetti of the Gelateria La Cremosa in Johannesburg and Karin Loots of The Ice Creamery in Pretoria. (Photos: Supplied)

South African dessert makers represented the country at the Gelato Festival World Masters for the first time this year. Of the 32 gelato makers from 18 countries chosen over four years who made it to the final, four were from South Africa, beaten in representation numbers only by five participants from Italy.

Sandro Tomassetti of the Gelateria La Cremosa in Johannesburg won a special mention for the plating of his ricotta cheese and pear gelato.

The other SA entrants were Michael Dube of Aroma Gelato in Pretoria with an apple-pie flavour; Karin Loots of The Ice Creamery in Pretoria with gin and marmalade; and Fahmida Moolla of Gelato Studio in Johannesburg with her macadamia praline.

As delicious as it sounds, pulling off a hybrid frozen dessert competition isn’t simple. Makers from across the world sent recipes and rare ingredients to Bologna, Italy. They supervised the making of the gelato remotely with the help of Carpigiani Gelato University. The judging then took place over several days to cater for the different time zones.

Achille Sassoli, the market development manager of Carpigiani and member of the festival’s organising committee, said: “We were honoured to have gelato chefs from South Africa in this edition. It’s a promising country for food and gelato.”

The festival arranged a national selection competition in Pretoria in 2019 and, although Covid-19 brought a stop to their plan to work with more African countries, this meant that several South African makers qualified for the World Masters.

Tomassetti said it had “been nice to feel part of an international gelato-maker community”. He said that, because of South Africans’ openness to new culinary experiences, he has seen an increased interest in gelato in the past seven years of running his business.

“On the strengths side, we see an increasing interest from consumers and investors in the gelato industry,” he said.

“In terms of weaknesses, we have to constantly fight [about] the importation of proper gelato packaging and machines due to timing and forex costs.”

Loots produces ice cream specifically for sugar-free, keto and diabetic diets, and said she was not in competition with any other product on the market.

Her flavour – gin and marmalade – was in part inspired by a cinnamon, clove and citrus infused gin that her friend’s distillery produces.

“This unique combination of spice and citrus and homemade orange marmalade with my sugar-free gelato is the perfect desert – in-between a guilt-free snack or even a palate cleanser,” she said.

Loots said that participating in the World Masters competition was a great privilege.

“Because South Africa is not well educated in the gelato field, this kind of championship is the perfect opportunity to draw attention to the gelato industry,” she said.

“It also gives our South Africans the opportunity to showcase our awesome country, our creativity and the high quality of ingredients available here.”

Although the term “gelato” may be used interchangeably with ice cream colloquially, it is technically distinguished by its ingredients, quality and fat content.

The Gelato Festival has been running since 2010 with various regional events, with the World Masters competition taking place for the first time this year. The winner was selected from around 3,500 participants over several years.

According to Sassoli, the industry appears to be booming. In the past few years, the Gelato University has started offering online training and it is noticing an increased appetite by makers to try new things, such as dairy-free gelato.

“At the moment our Gelato University is full of requests for online and in-presence gelato-making courses,” he said. “This is a very important signal for what will be in store for the following months.” DM168