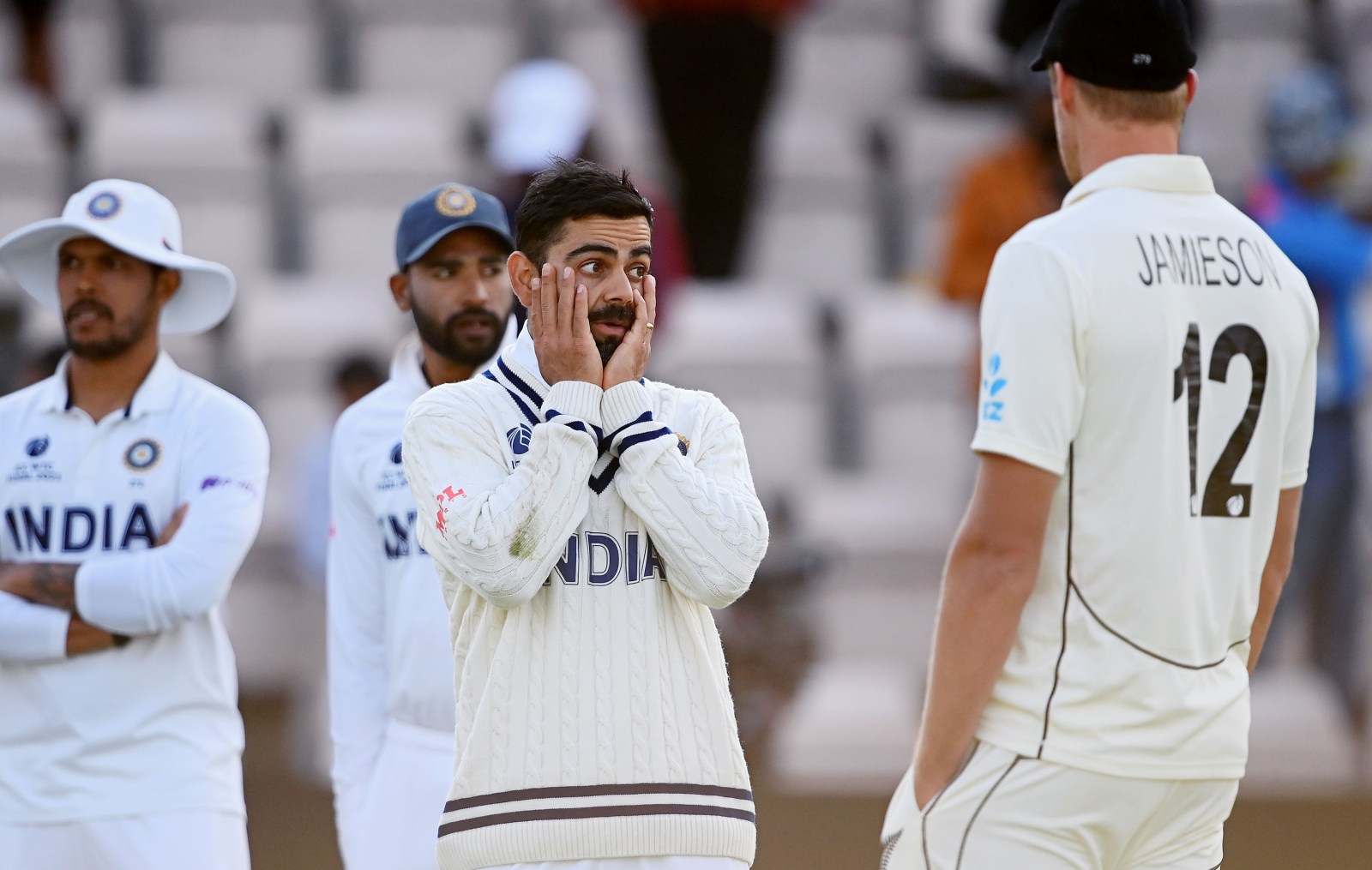 Virat Kohli of India talks to Kyle Jamieson after the Reserve Day of the ICC World Test Championship final between India and New Zealand at The Hampshire Bowl in Southampton on 23 June 2021. (Photo: Alex Davidson / Getty Images)

South Africa’s cricket body managed to salvage this summer’s tour by India, although it had to make a few concessions to ensure the most watched and richest team in the world would arrive.

There are no perfect scenarios in the Covid-ravaged sports world, so every event, tour and match and the associated difficulties of bio-bubbles and stringent Covid-19 protocols must be weighed up against the alternative of not happening at all.

In the case of India’s tour to this country, there was only one option for Cricket South Africa (CSA): it must take place. The alternative was unthinkable.

India’s highly anticipated tour to South Africa during December and January is the most vital of any in the current four-yearly broadcast cycle because of the immense income it generates from television rights sales.

That was in a perfect world. In the Covid world, naturally there were obstacles to overcome at the last minute and the tour’s length has been reduced, with the four T20Is dropping off.

That will shave more than R100-million off the tour income for CSA, although the Board of Control for Cricket in India (BCCI) has committed to completing those fixtures before the current broadcast cycle ends in 2023.

While it was a financial blow to lose the four T20Is in a year when CSA posted a R221-million loss, it’s still a lucrative tour that will keep the wheels of the professional cricketing industry in South Africa turning.

CSA remains on shaky financial ground, though, even with the vast income earned from the India tour. After years of poor management and of carelessness with cash reserves, which are down from R1-billion in 2015 to R121-million currently, CSA must clamber out of a financial wreck that one India tour won’t salvage completely. But it’s enough to keep CSA financially viable for the foreseeable future.

This is where the BCCI must earn some credit because the easy option for it would have been to pull the plug on the tour. It’s not as if Indian cricket needs the small income it would derive as the touring team in South Africa.

For so long, and with justification because of its overwhelming commercial power, the BCCI has been viewed as the bully of world cricket. The International Cricket Council (ICC), the sport’s global governing body, is powerless to stop the BCCI doing pretty much as it pleases.

Cricket Australia (CA) and the England and Wales Cricket Board (ECB) are next in the power stakes behind the BCCI, making up the trio of nations that effectively shapes cricket’s future. The ICC is a virtual bystander in this power play.

CSA was justifiably concerned that, if the BCCI decided against touring now, there would be no recourse because the ICC could do little more than issue a statement, make some noise and then retreat to its basket if the BCCI barked.

The situation became even more critical when India Test captain Virat Kohli, who wields immense power in the game by virtue of his status as the skipper of the most powerful team, raised concerns about the tour.

“It is pretty natural [for players to be concerned about the protocols]… There are players who are not part of the group right now who will be entering quarantine to join the team bubble to fly in a charter,” Kohli said on the eve of the second Test between India and New Zealand in Mumbai last week.

“Those kinds of things you want to seek clarity [on] as soon as possible. So, we have spoken to all the senior members of the squad. Obviously, Rahul bhai [Dravid, the coach] has initiated a conversation within the group, which is very important.

“You want to be in a situation where you know exactly what is going on. We have been talking to the board, and we are pretty confident that within a day or two or pretty soon we will have absolute clarity as to what is going on.”

Kohli’s desire for clarity was not unreasonable in the wake of (largely) Western governments and media reacting in a disproportionately hysterical way to the news of the new Omicron Covid variant, identified in South Africa on 24 November.

Almost immediately the UK and the European Union, quickly followed by the US, put southern Africa on their so-called red lists. That makes it all but impossible for travel between the territories.

Some of the stories that emerged in more hysterical European and British media outlets in the wake of the new variant painted an apocalyptic scene.

Against this backdrop the BCCI was making its final arrangements for the national team’s tour to South Africa. The India A side were already in the country for an unofficial “Test” series against South Africa A when news of Omicron’s existence emerged.

The BCCI could have withdrawn the A side in panic and called them home, but they chose a measured approach to gather more information and talk to CSA.

Unlike England, who cut short their white-ball tour at the end of 2020, and Australia, who didn’t tour at all earlier this year, the BCCI was more honourable.

Last Friday there were long discussions between CSA and the BCCI, which included leading South African scientists convincing them that the new strain would pose no additional risk. Kohli was reassured and a deal was struck to shorten the tour and move the start date out by a week.

Instead of arriving on 9 December, India’s team will land about a week later. The first Test, to be played in Centurion, will start on the Day of Goodwill. The Wanderers will host the New Year’s Test on 3 January and Newlands will stage the third Test starting on 11 January. Three ODIs will follow in Paarl and Cape Town, ending on 23 January.

Unlike the ECB and CA, who put their own interests first when they abandoned their commitments to tour South Africa, the BCCI and Indian team have not.

No team in world cricket has been in a bio-bubble for as long as India has over the past 20 months. In the past year they have had lengthy tours in Australia and England, played home series against England, toured Sri Lanka, staged the Indian Premier League in two chunks because of Covid disruptions and played in the T20 World Cup.

Yet they are still committed to fulfilling the bulk of their South African fixtures despite the uncertainty over the new variant.

The major lure for India’s players is that South Africa represents the last frontier they need to conquer. No Indian side has won a Test series in South Africa in 30 years of trying.

In 2017, India beat Australia away for the first time and backed it up earlier this year with a second series win. They also beat England in England in 2021 and have claimed away series wins against every other leading nation barring South Africa.

Many fine Indian players, from Kapil Dev to Sachin Tendulkar and current coach Rahul Dravid, did not experience a series win in South Africa. That hole in their increasingly impressive body of work over the past five years played a big part in India’s players opting to endure another month of bio-bubble life.

India’s touring squad will be finalised soon, but it’s expected to be a large party because of the threat of positive Covid cases, which would require isolation for those affected.

South Africa named a 21-man squad on 7 December, instead of the usual 15 for the series, underlining the extraordinary circumstances of another Covid-impacted series.

Seam bowler Duanne Olivier has earned a recall after returning from the UK, where he played as a Kolpak recruit, while the uncapped group of wicket-keeper/batter Ryan Rickelton, all-rounder Marco Jansen, off-spinner Prenelan Subrayen, batter Sarel Erwee and seamers Sisanda Magala and Glenton Stuurman have been included. DM168