With China backing the junta and Aung San Suu Kyi in prison, Myanmar is stuck in newest iteration of military rule 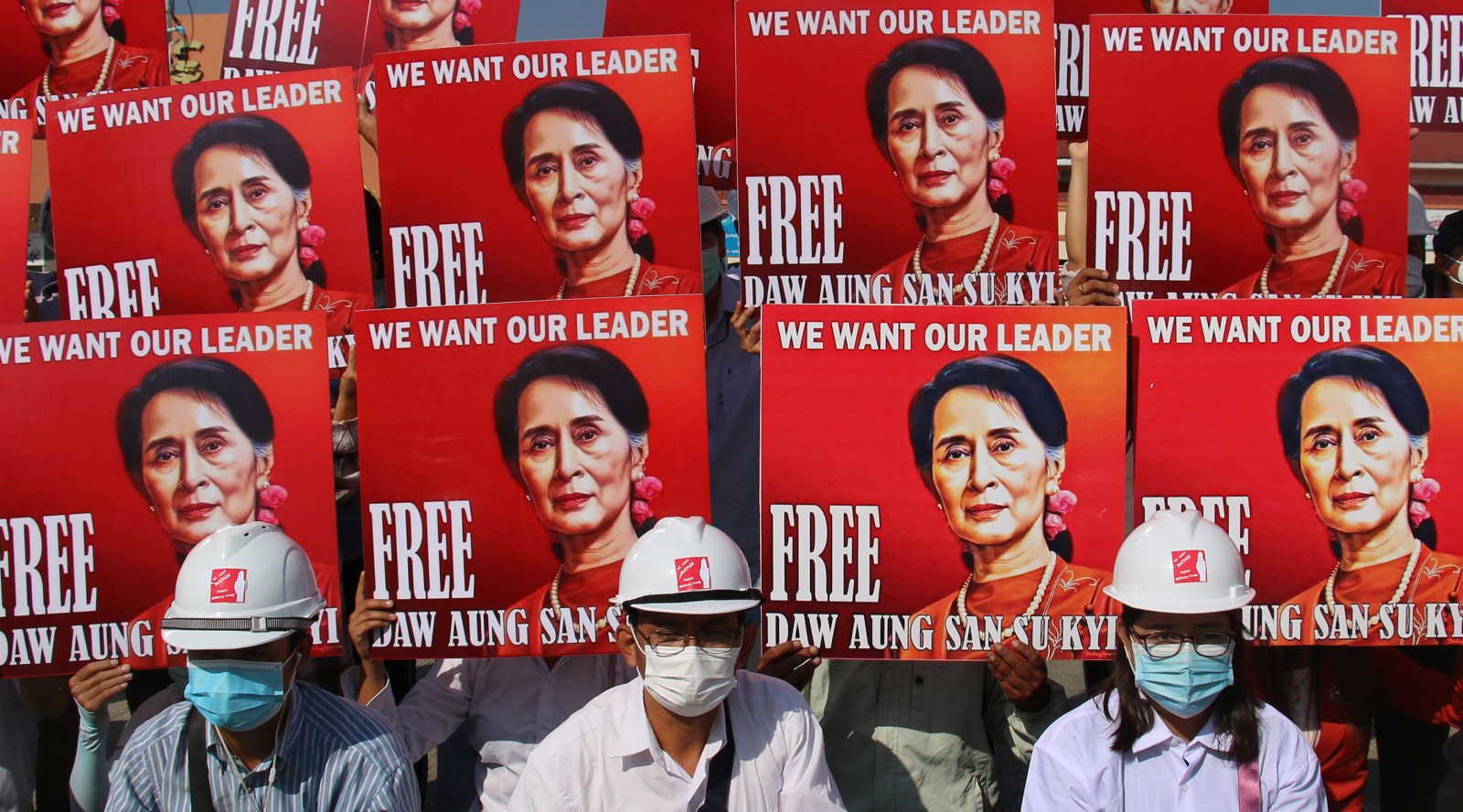 Demonstrators hold up placards calling for the release of detained Myanmar State Counsellor Aung San Suu Kyi during a protest against the military coup in Naypyidaw, Myanmar, on 15 February 2021. (Photo: EPA-EFE / STRINGER)

This time around, Aung San Suu Kyi’s arrest and removal from the presidency may generate much less support for her. Opponents of the military are increasingly being assailed by the army in violent atrocities.

For decades, the circumstances of Aung San Suu Kyi — now sentenced to two years in prison, ostensibly for risible crimes such as illegally possessing walkie-talkies – ensured she was an international figure of great regard and near veneration. At the peak of that apotheosis, for many, she had been placed on a pedestal similar to Nelson Mandela and Václav Havel.

Collectively, they were figures of great stature, admired and respected for their efforts and suffering to extend the rule of law and expand democracy. They were figures of importance in a broader international struggle for freedom, human dignity and human rights.

The daughter of one of Myanmar’s independence movement heroes, Aung San, Aung San Suu Kyi had lived in exile in Britain for years after marrying British academic Michael Aris and raising two children. She became a presence internationally for a growing campaign to bring an end to the economically ruinous, repressive, but long-running military dictatorship pressing down upon her nation.

After she returned home, she had to live in a rigorously monitored, severely restricted house arrest. In those years, she received numerous international awards, including the 1991 Nobel Peace Prize, “for her non-violent struggle for democracy and human rights”.

As growing dissatisfaction and open protests against the dictatorship rose, the generals eventually gave way to limited democratic reforms and a more openly elected national Parliament. The military continued to hold several seats allocated to them. (This paralleled the military’s increasing dominance of many aspects of the country’s economy, even as the military also allowed China’s growing influence over much of the economy, along with the inevitable corruption.)

In the 2020 election, the National League for Democracy (NLD) had scored exceptionally well and Aung San Suu Kyi reconfirmed her role as the prime minister, with little say over the military’s budgets or policies.

Since the military staged its first coup in 1962, Myanmar became an increasingly poor nation over decades, despite natural wealth in minerals, agricultural and timber products and petroleum. Its inhabitants had little hope the country’s economic status would change for the better. Over the years, its circumstances came into sharp contrast with its southeast Asian neighbours.

In the second decade of the 21st century, the economy improved, but only after a semblance of democratic practice and as some Western sanctions were lifted. President Barack Obama’s 2012 visit was symbolic of hoped-for further change.

Myanmar has had a difficult history for decades. During World War 2, while still part of British India, it was occupied by the Imperial Japanese Army. Years before that, a Burmese independence movement led by Aung San had served in the Japanese occupation state. He was assassinated in 1947, just prior to the country’s independence.

Besides the national majority of the ethnically Myanmar people, the Bamar, there are also many so-called “hill tribes” in the northern and eastern parts of the country, who have frequently revolted against the government. There is also the Rohingya Muslim minority in the southwest. The dreadful treatment of that minority became a new focal point for world criticism of the government, and her defence of it seriously wounded Aung San Suu Kyi’s global reputation.

Despite serious pro-democracy demonstrations in 1989, the military held political and economic control until it finally allowed for a new Constitution and elections after more civil unrest in 2012. One election returned a significant majority for the NLD in 2016, and then again in November 2020. In that latter election, the NLD made further gains, which appeared to have deeply embarrassed the military leader, General Min Aung Hlaing, and may have pushed the military to carry out its most recent coup.

As The Economist described it: “Early on the morning of February 1st [2021], the army toppled Myanmar’s elected government, arresting its de facto leader, Aung San Suu Kyi. Next, the army declared a year-long state of emergency and handed power to the commander-in-chief, Min Aung Hlaing. Soldiers have been deployed to the streets of the capital, Naypyidaw, and the largest city, Yangon [or as it was previously named, Rangoon], where they have erected blockades on major roads. A decade after the generals voluntarily relinquished control of the country, they have clawed it back. The world has to decide how to react to this latest setback for democracy in southeast Asia and the wider world.

“When the army ended nearly 50 years of military rule in Myanmar in 2011, making way for a civilian government, many were suspicious about its willingness to relinquish power. It initially tried to exclude Ms Suu Kyi, much the country’s most prominent democracy activist, from government; it handed authority instead to a party of military stooges. When it did at last allow Ms Suu Kyi’s National League for Democracy to take power, in 2016, it still retained great authority—but not, apparently, as much as it would have liked.”

Sharing power effectively with the military was damaging to her reputation. However, her court appearance on behalf of the treatment meted out to the Rohingya who were driven from their homes into squalid refugee camps or to neighbouring Bangladesh was still more troubling. This especially to an international community that had continued to support her efforts to rule.

Some argue that she chose this path to gain leverage over the military. Instead, events showed she was more an ethnic Myanmar nationalist than the once-revered human rights symbol. Now that she has been sentenced to prison, that gamble seems to have been unsuccessful.

In the days after the 2020 election, the military began rounding up civilian figures and arrested Aung San Suu Kyi on charges including ownership of a helicopter and importing eight walkie-talkies without the necessary import licences and permits.

A guilty sentence would render her ineligible to hold public office, and so it has turned out. With the verdict about to be announced, The Economist quoted David Mathieson, a veteran analyst, as saying: “This is really about discrediting her – it’s about saying, ‘She’s a crook and look at all these laws she broke.’” The Economist continued: “The junta wants to tarnish her and the election that her party, the National League for Democracy (NLD), won by a landslide in November 2020. The generals argue, with no evidence, that the NLD cheated on a vast scale, and that they therefore had to intervene for the sake of democracy, which they purport, preposterously, to cherish. The junta has formed a ‘caretaker’ government that will rule the country until it can hold a rigged re-run of the election in 2023.”

At the time of Aung San Suu Kyi’s most recent arrest, Daily Maverick wrote about the challenges such developments gave the Biden administration. We noted: “For the US, there is also the question of how much pressure it might exert on Myanmar’s military before the Chinese begin to scowl about that, linked, perhaps, to their near-obsessive, perennial concerns about any hints of foreign interference regarding Xinjiang, Hong Kong, religious freedom inside China – or further support for Taiwan.

“No one should expect the UN to exercise a major role in dealing with this assault on democracy either, given those close Myanmar-China ties and China’s presence on the Security Council. Similarly, one should not expect the 10-member regional body, the Association of Southeast Asian Nations [Asean], to do much more than express the need for calm, given Myanmar’s membership in that body and the fact that several of Asean’s other members are hardly paragons of democratic practice either.

“The most likely scenario, at least at this point, then, is for international consternation by human rights and pro-democracy groups, but less action. As a result, the people of Myanmar may have to sort this one out for themselves.”

Sadly, too, given that the now former president has been sentenced to prison, and given her less than stellar response to the Rohingya tragedy, it would be foolish to expect a tsunami of condemnation to rise up against the new military rulers. Instead, The New York Times predicted: “But already, a new democratic movement has emerged — younger, more progressive, more confrontational and ready to look beyond Ms Aung San Suu Kyi for a guiding light.”

The country is now on course for an increasingly violent reaction to this newest iteration of military rule – and the inevitable responses from them. DM168