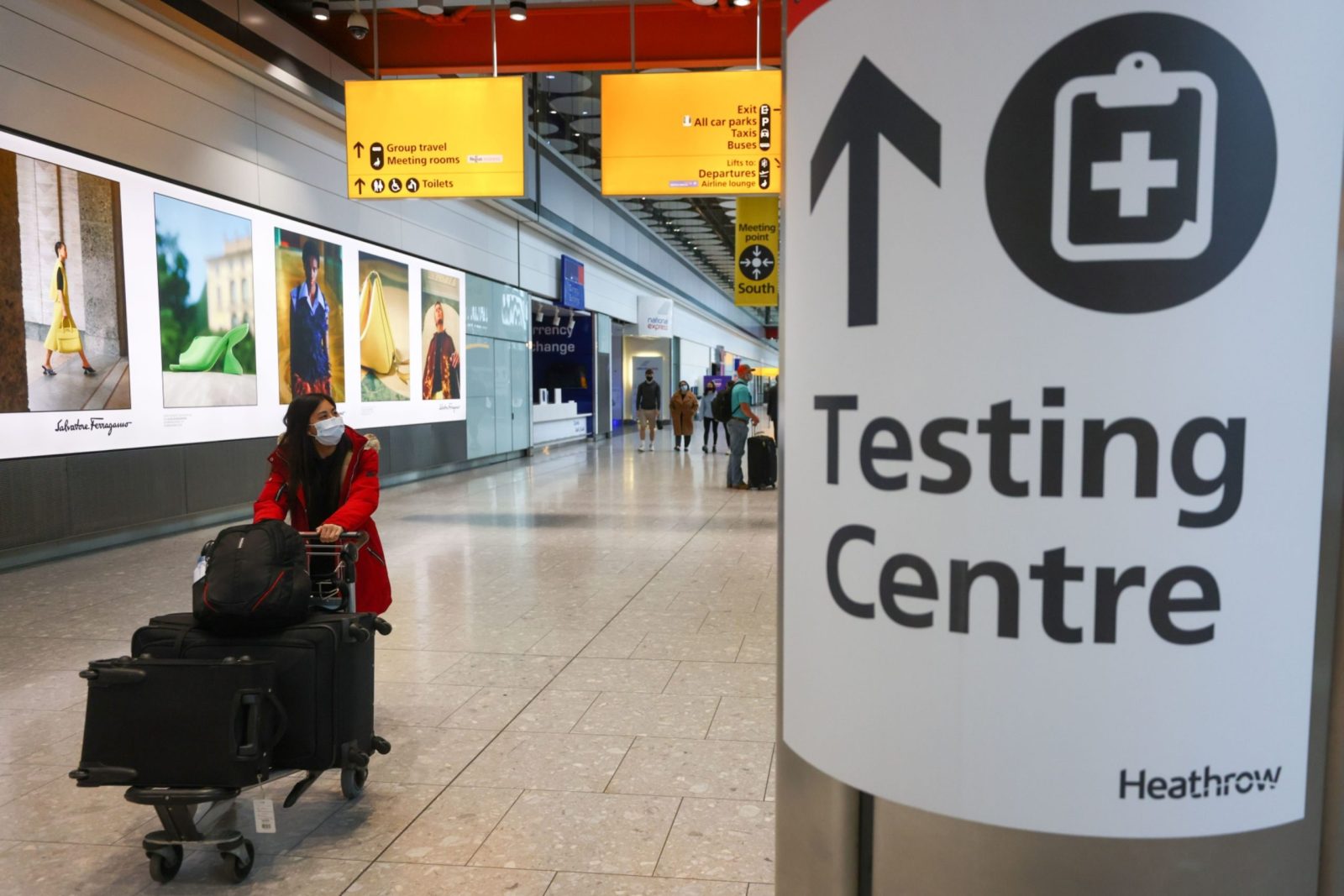 A traveler passes a sign for a Covid-19 testing centre at London Heathrow Airport in London, U.K., on Monday, Jan. 18, 2021. Photographer: Simon Dawson/Bloomberg

The Canadian government has explained that travellers arriving from South Africa must show negative molecular Covid-19 test results from third countries en route because Canada fears their South African test results might have expired on the long indirect journey between the two countries.

Many South Africans were outraged when Canada announced recently that, as one of its measures to keep the new omicron variant out,  it would not accept negative Covid-19 tests from SA as sufficient proof to allow entry.

South African scientists jumped to the defence of SA’s tests and insisted they were up to world standards.

The Canadian High Commission (embassy) in Pretoria could not at first explain why Canada was not accepting the SA tests.

But on Saturday it put out an explanation in a statement. It said: “For those who have a right to enter Canada (Canadian citizens, permanent residents, and people with status under the Indian Act), Canada requires pre-entry and arrival testing, screening, and quarantine measures.

“Given the lack of direct flights from South Africa to Canada and the resulting cumulative travel time, an additional requirement for those who have a right to enter Canada is a molecular test in a third country.

“The aim is to reduce the time between when a traveller last takes the test and the final leg of their flight to Canada. This limits the risk of importation of the virus and any of its variants into Canada”.

Canada said this was a “precautionary measure, while the Canadian and global medical, public health and research communities actively evaluate this variant — as has been done with previous variants — to understand the potential implications for transmission, clinical presentation and vaccine efficacy.

“To enable the return of travellers who are seeking to return to Canada from South Africa, Transport Canada issued a time-limited exemption to allow them to be tested in South Africa but within 48, rather than 72, hours of return.”

This exemption was introduced from 4 December and would have expired on December 13. It applied only to Lufthansa flights operating from Cape Town and Johannesburg, with a transfer to Air Canada or Lufthansa in Frankfurt.

However this weekend Canada extended the exemption until 7 January and said it could apply to all indirect flights departing from South Africa to Canada, regardless of the carrier.

But all other conditions will still apply and the flight into Canada must depart within 18 hours of arrival in the country of transit.

Travellers may also still use other itineraries as long as there are mechanisms in place to obtain a test in transit, the High Commission statement said.

“The Government of Canada is grateful to South African authorities for their transparency and efficiency in bringing the omicron variant to the world’s attention, and for the ongoing research critical to the global
response to omicron.

“Canada is committed to working with international partners, such as South Africa, to end the pandemic and it has the highest regard for South Africa’s world-class science and medicine,” it said.DM

This story was updated post publication to add further detail about the extension of the exemption to 7 January.