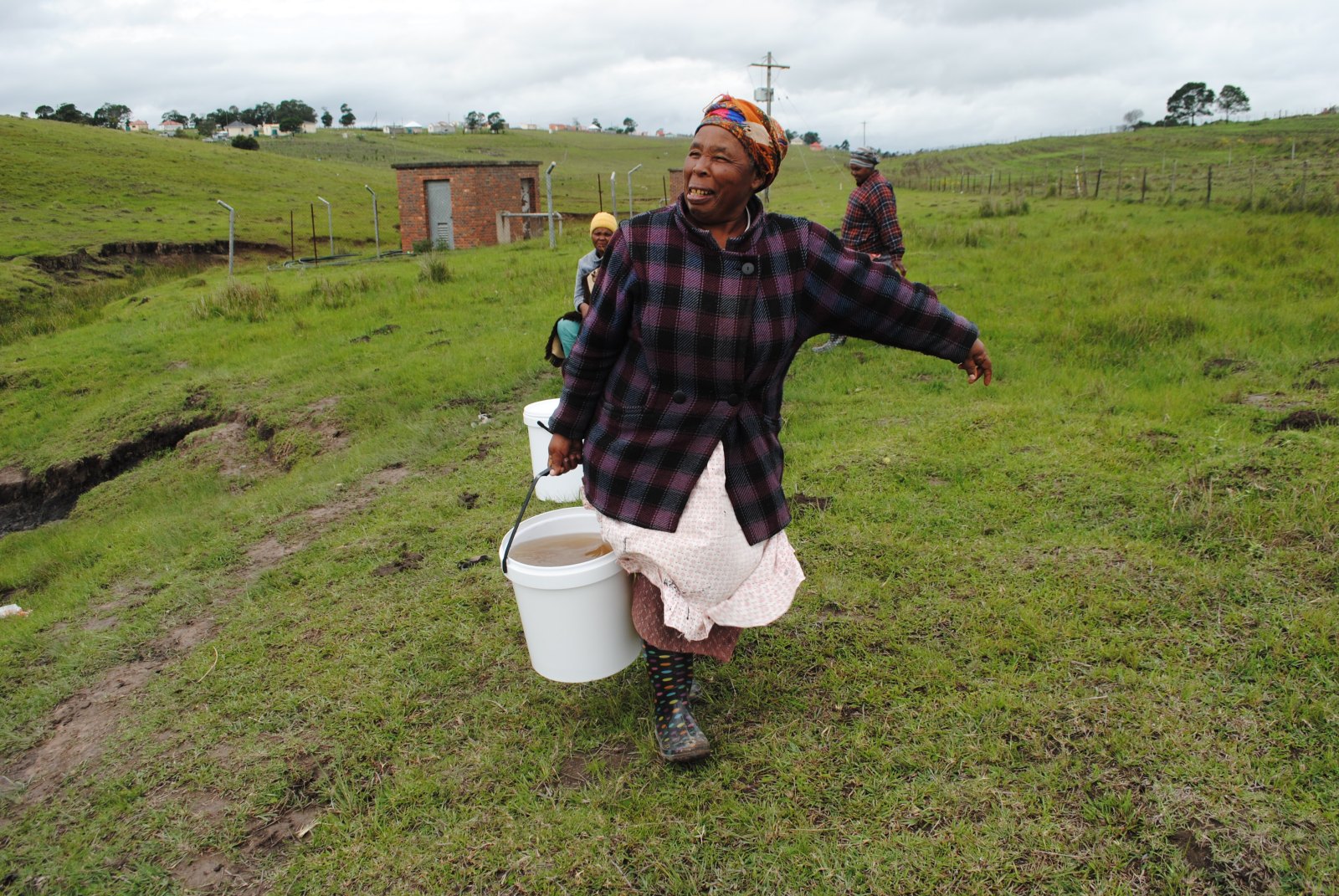 Nosebenzile Ntongolo, 64, lives in Mancam village in the Eastern Cape. She walks one kilometre from her house to a spring where she and other villagers collect water daily. (Photo: Mkhuseli Sizani)

Villagers in the King Sabata Dalindyebo municipality have been walking at least a kilometre to fetch dirty water from a spring. Meanwhile, the municipality is among several in the OR Tambo District in the Eastern Cape where water operators have not been paid.

The workers applied for a writ of execution against the municipality after they were not paid for months. The CCMA awarded the workers R1.5-million for three months of unpaid wages. This means each worker is to receive R10,500.

Speaking after the CCMA hearing on Monday, Mawethu Ncikidana said he is in debt and struggling to feed his family. As a result of the municipality’s failure to pay them consistently, he says, Ncikidana and his wife have had to remove their children from schools where they can no longer afford the fees. “I can’t even buy my children Christmas clothes and gifts. My funeral policies have lapsed.”

He said their troubles started in 2019 when they would often go up to two months without payment. Ncikidana, who was responsible for the Magubu Nkalane Water Scheme in Qunu, said the workers chose to continue working because they did not want communities to suffer. “We decided not to punish them because of the municipality’s poor management,” he said.

Thobile Makiwane from Libode said they had been fighting for their monthly stipend of R3,500 since May. Only when they first threatened to take the municipality to the CCMA in September, were they paid for the month of June. Since then no other payment had been made, he said.

Makiwane and his wife have four children and care for three of their relatives’ children. “I cannot provide for them anymore. We depend on relatives in order to eat. Many workers are being kicked out by landlords because they are unable to pay rent.”

Plight of the Mqanduli villagers

Meanwhile, villagers in Mancam in the King Sabata Dalindyebo municipality say they walk to a spring about a kilometre from their houses to fetch water from as early as 4am. They say the murky water, which often contains fungi and worms, has to be strained and boiled before use.

The village is the birthplace of United Democratic Movement’s leader Bantu Holomisa.

The Tyolo Mqanduli water project was abandoned about a decade ago. Now the OR Tambo District Municipality, which administers water in the area, says the project is back on track and is to be completed next year.

But, walking to the spring with other villagers, Nosebenzile Ntongolo, 64, said accessing clean drinking water has been a challenge for as long as she can recall. “We have no choice but to drink, cook, bathe and do our laundry with the same water. White clothes, especially school uniforms, get damaged.”

She said the village had an old communal standpipe but it stopped working and the council never replaced it, she said. “We have been voting for the ANC, hoping for a better life.”

Nomathemba Ndlwayivulwa, 57, lives with her 12 relatives. She said she uses a large bath to collect rainwater for the household. “Cows, goats, sheep and pigs also drink from that spring. I carry a 20-litre bucket twice a day on my head. But that water is not enough because I have to cook, bath and do the laundry,” she said.

Ndlwayivulwa’s 30-year-old daughter, Busisiwe Ndlwayivulwa said she remembered having to fetch water daily before going to school. Not much has changed for many learners still in the village.

Zimkhita Macingwane, spokesperson for OR Tambo District, said the water supply project had a budget of R21.8-million and would supply ten villages. She did not answer our questions on details about why the project had been delayed.

She did not respond either to questions about the CCMA ruling on Monday. DM