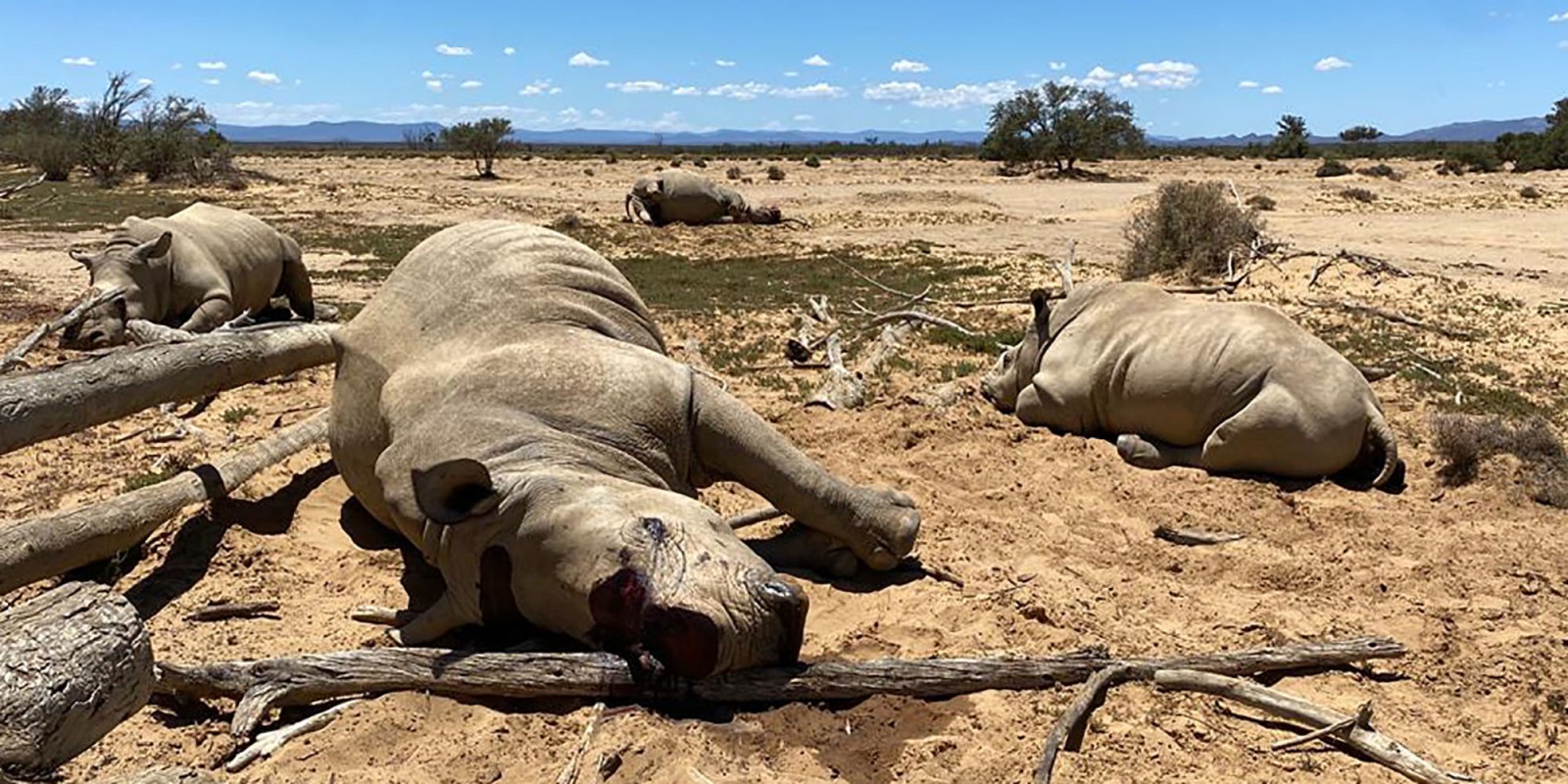 Four rhinos were killed by poachers in a private game reserve just outside of Cape Town – highlighting government inaction in dealing with rhino conservation.

This article contains graphic images that may upset sensitive readers.

During a routine patrol on Wednesday night an anti-poaching unit found four rhinos dead and one injured, with their horns hacked off at Inverdoorn Private Game Reserve, just outside Cape Town.

Johan van Schalkwyk, group marketing manager for Aquila Collection, a portfolio of private game reserves in the Western Cape (including Inverdoorn), told Daily Maverick, “There were five rhinos injured and four of them succumbed to their injuries. One is still alive and mobile.”

Van Schalkwyk said that of the four rhinos found by the anti-poaching unit, two had already succumbed to their injuries, while the remaining two, although still alive, were heavily injured. They later died – one was pregnant.

At approximately 10:30pm the game reserve’s Anti-Poaching Unit raised the alarm and activated a tracking operation to find the fifth missing rhino on the 10,000 hectare game reserve, while the management, conservation teams, wildlife veterinarians, law enforcement and others were notified and dispatched to the scene.

At about 2am the unit found a fifth injured female rhino, shot in the face, still alive.

Van Schalkwyk said that large-calibre rifle rounds from silenced weapons were found on the scene and patrols were intensified to protect all against the heavily armed perpetrators.

The South African Police Service and CapeNature were contacted and arrived on the scene to assist with the investigation.

Searl Derman, the owner of Inverdoorn Private Game Reserve, said on Thursday evening, “It’s been a horrific experience, everyone is very tired. We are very grateful to the… police and CapeNature who’ve sent us professionals… and are really committed to solving this case and finding the perpetrators, the poachers.”

According to the latest available data released by the Department of Forestry, Fisheries and the Environment (DFFE) on 31 July, 249 rhinos were poached for their horns in South Africa between January and the end of June.

The DFFE provided this provincial and national breakdown for January to June 2021 (in comparison to 2019 and 2020): 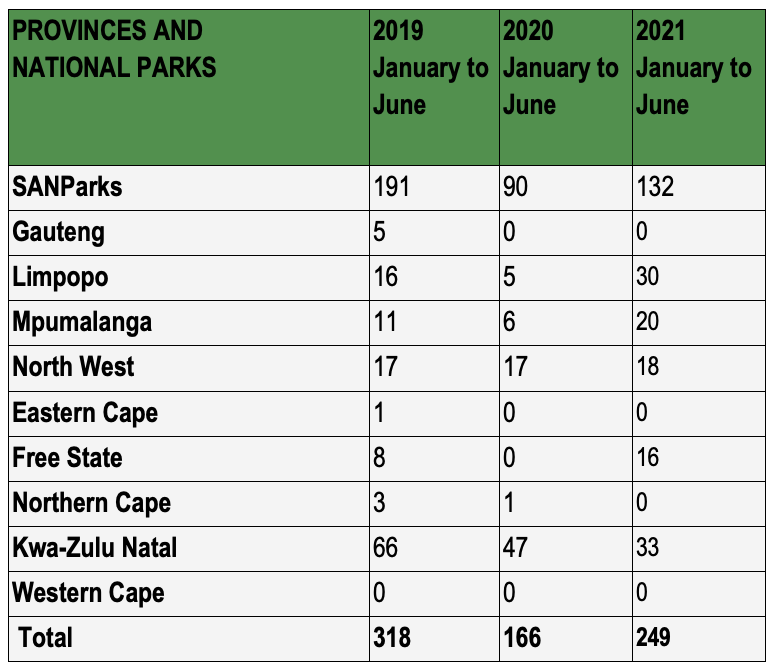 Albi Modise, chief director of communications for the DFFE, said the official rhino poaching statistics for 2021 would be released early in 2022.

“During the initial hard lockdown period, there was almost celebration in the industry of low numbers [of rhinos killed by poachers], and that was just due to very strict and forced movement of people,” said Van Schalkwyk.

“Recent reports have shown an increase in activity, but especially to the north of South Africa. I think that can mostly be attributed to the poverty of the situation and the ongoing pandemic and desperate communities.”

“Usually, they would obviously breach the perimeter, have some insights on the location of the rhino at a particular time, and then shoot with silenced weapons, usually from a very close range so that it has full impact, and when the rhino is then demobilised, they literally hack the rhino horn.”

Van Schalkwyk reported that a wildlife veterinarian team under the leadership of Johan Marais was immediately dispatched to assess the injuries of the fifth maimed rhino, and they were considering facial reconstructive surgery as a matter of priority.

“She is obviously bolting and not letting anyone close to her,” said Van Schalkwyk. “The vets and CapeNature and teams are monitoring the situation and they’re waiting for the perfect time to dart her.

“It’s been a traumatic experience for everyone. We’re doing everything in our power to gather all the evidence, and in the same breath, to try save the other rhino that’s taken a bullet to the head,” said Derman, adding that the rhino lost a lot of blood and was limping on Wednesday but seemed to be more mobile the following day.

Derman, who is also the owner of the Aquila Collection, said that as was the case with the collection’s previous poaching incident in 2011, they would spare no expense or effort to catch the poachers, and that they had already instituted a private forensic investigative team and private investigators on local, regional and national levels.

“We will do everything in our power to catch the perpetrators, as we did last time. And we were instrumental in catching them and putting more than one syndicate away,” Derman said.

“It’s important to understand that the private costs that these organisations and lodges have is astronomical, and there’s little to no government support,” said Van Schalkwyk.

“We don’t have the SANDF or CapeNature rangers to support us. It’s a private effort to keep conservation alive.”

Van Schalkwyk said that during the last poaching incident in 2011, the SA National Defence Force was active in the Kruger National Park and other state-owned reserves, while organised crime, as opposed to opportunistic poachers, were branching off to attack private game reserves. He said private lodges could not afford the resources to protect their rhinos.

Kim da Ribeira, the director of Outraged South African Citizens Against Rhino Poaching, told Daily Maverick, “It is in the Minister’s [Barbara Creecy’s] best interest to actually get involved. Unfortunately, my experience is that there is a lot of discussion and little actually comes of decisions taken.”

“Although they speak of it, there’s been no real action on the ground,” said Van Schalkwyk. “We are thankful for some of the work that the SANDF and the training partners have been doing. But the private game reserves of South Africa are really on their own.”

“I’m shocked that we lose any rhino at all to poaching anymore,” said Da Ribeira. “Government still has to show the political will to end this crisis; they should show true leadership and address corruption at every level.”

The DFFE’s Modise told Daily Maverick that the department was aware of this incident and said, “The South African Police Service is currently investigating the case. The Department of Forestry, Fisheries and the Environment will get involved if we are requested to do so.”

“It’s sad that it takes a situation like this particular incident to put light on this on a national level,” said Van Schalkwyk.” DM/OBP