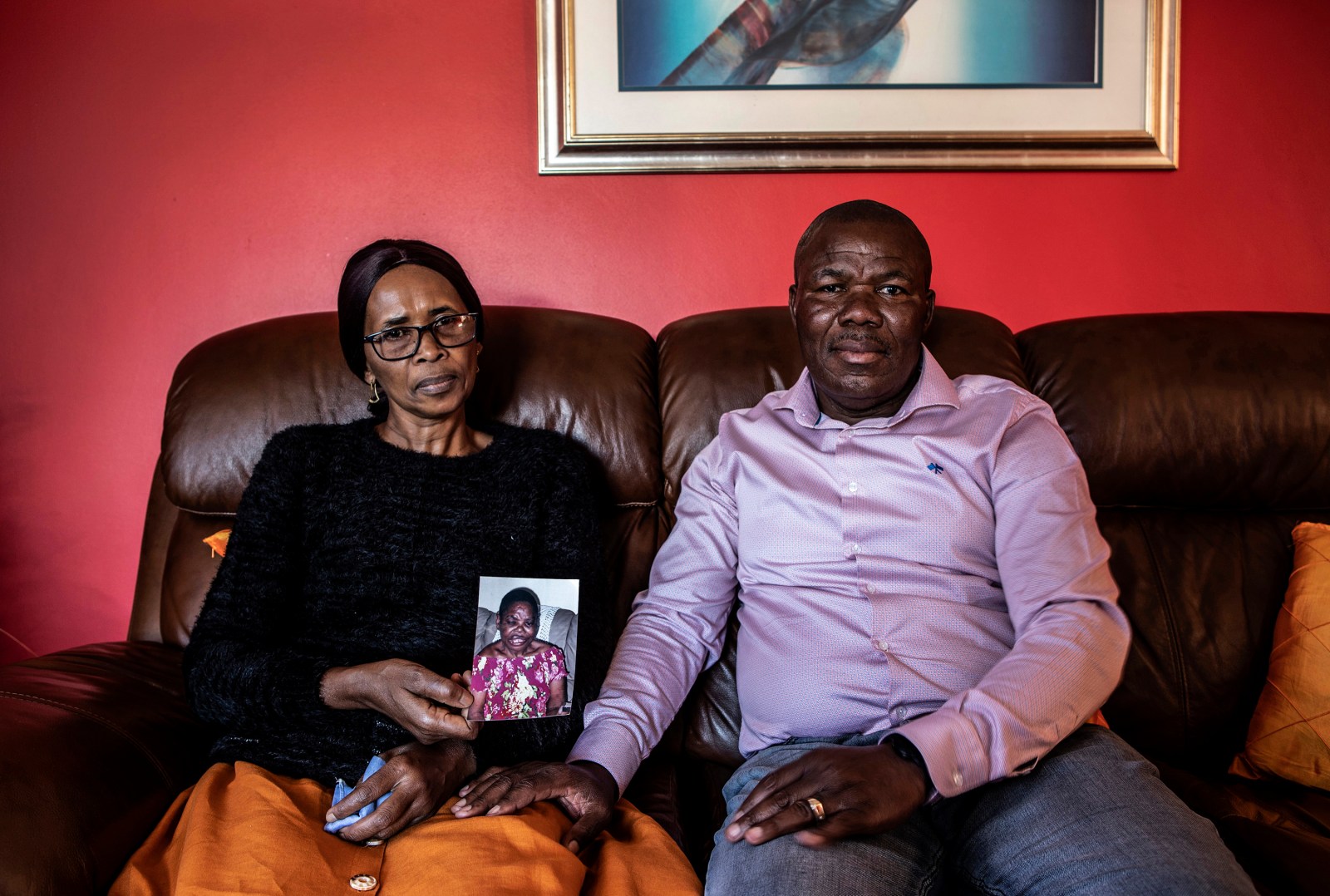 Thamsanqa and Thandi Mthemba with a picture of his late sister, Emily. (Photo: Mark Lewis)

The Life Esidimeni inquest will determine whether there can be any criminal liability for the deaths of 144 mental healthcare patients in the care of the South African public health system in 2016. Maverick Citizen is running a series of weekly portraits of those who died and the stories of loved ones left behind. Harriet Perlman, Darnell Nxumalo and photographer Mark Lewis have been interviewing families as part of an ongoing memorial and advocacy website. Families have waited five difficult years for answers. Their stories matter.

Emily was a quiet and gentle person. She loved soft porridge and tea for breakfast.

Emily suffered from bad epilepsy and when she was nine or 10 years old, she fell into a fire. Her mother, a single mom, worked as a domestic worker to support 12 children. She needed to find a place where Emily would be safe.

“She was safe and well cared for at Life Esidimeni in Waverley,” her brother Thamsanqa says.

Thamsanqa married Thandi 36 years ago. Thandi loved and helped care for Emily. When Thami introduced his new wife to Emily, Thandi said: “I am your new sister.”

“Sissie. My sissie,” Emily replied with a big smile.

Then, in December 2015, Thamsanqa and Thandi were at a meeting at Waverley when they were told everyone would be moved out in the next three months.

“I was devastated when I heard. Who would take care of my sister?” Thamsanqa says. “I had a job as a process controller and Thandi was a full- time domestic worker. I remember joining the WhatsApp group of concerned families that day.”

Emily was moved to Cullinan where Thamsanqa eventually found her three months later. “Cullinan is two hours from where we live in Vosloorus. We had to borrow R500 to hire a taxi to get there.”

But when they found Emily they were shocked.

“She was like a skeleton. Skin and bones. She was covered in bed sores,” says Thandi. “The first thing Emily said to me was: ‘Water, please water.’ We bought KFC and she ate it all. Even the bones. And when I reached out to touch her she just screamed: ‘Don’t touch me. Don’t touch me.’”

That was the last time they saw Emily. One day at work Thamsanqa got a call.

“I have bad news for you. Your sister is no more,” the person said.

Thamsanqa says the arbitration was important and the counselling they received was helpful.

“But the people who did this are still working. And they said they would erect a monument in honour of the people who died,” he says. “They didn’t. I want my sister to be honoured and remembered.” MC/DM

For more background on the tragedy and for information and resources about mental health, visit the Life Esidimeni memorial website here.