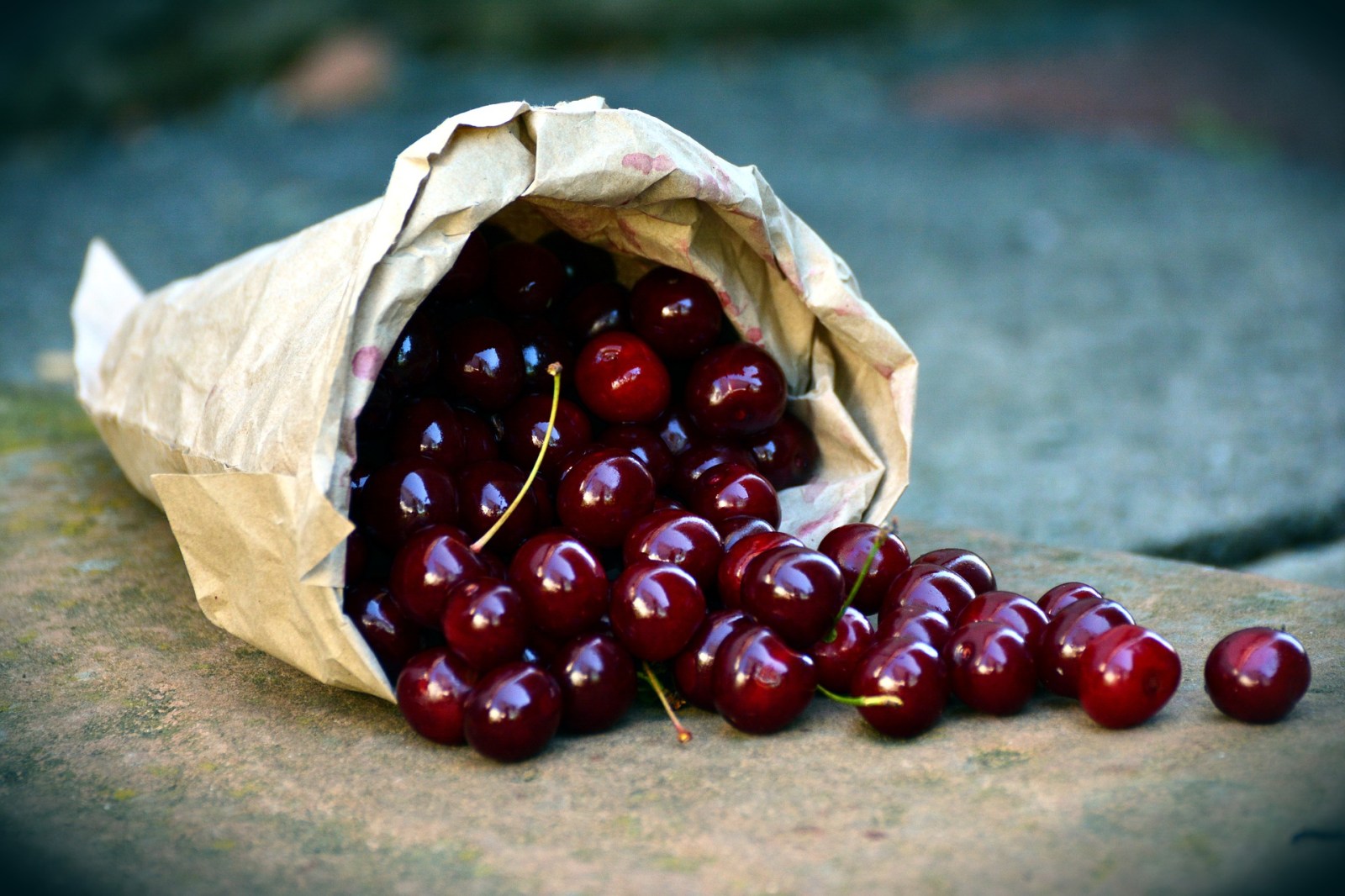 (Photo by congerdesign on Pixabay)

The cherry season is short and sweet. Make the most of it with this polished jewel.

God I love cherries. As a child I used to spit the pips out when I went for a walk and tread on them on my way home. A cherry was more than a fruit, it was a whole panorama, mainly because of its exquisite beauty. In my very first flat in Paris, Place Vendôme, lent by a friend, the first thing I did was buy a half kilo of cherries (cost more money than a car) and put them in a yolk yellow bowl. A newly bound notebook, a bottle of malt whiskey, an old lamp and a piece of fruit cake, somehow set the scene for a writer. But I never wrote a thing. I ate the whole bowl of cherries.

I love the way they all have stalks; it is those little bent pieces of wood I find quite enchanting (and what makes cherries too pricey, they have to be picked by hand) and even the pips, yes I am cherry befok.

In France some cherries are darker and not so sweet. The Cape cherries are honey sweet, with colours as sharp as breaking glass, always on the red spectrum with toff names like Royal Hazel and Royal Dawn.

The place to find the best quality is the Oranjezicht City Farm Market (OZCF) famous for its recherché veggies, midnight-black radishes, Savoy cabbages (not even related to the old common and garden stodge), organic everything, celeriac, and boy, the best tomatoes in the world.

Today at the market the cherries looked shellacked against the greyness of the day. They are everywhere, set in nougat like faceted gemstones, popping out of Sepial’s melting Korean fried kimchi dumplings, folded into crepes, clustered in a cabochon shine on top of cakes, popping up in cherry pies, dripping off homemade cakes and bleeding into ice cream.

It is cherry time and everyone is happy. Sheryl Ozinsky, a creative energy freak and mastermind behind this world class market says, “We challenged our market traders to use cherries in their offerings and this year they’ve pushed us close to Cherry Heaven.”

It is that first bite that grabs you by the throat, the flesh has a sort of tension that I love, to me a really smarter lash than any other fruit on the market. But cherry time is fleeting, ushered to our taste buds through appropriately beautiful, butterfly frail blossom. Anyone who has been in Japan in cherry blossom time (I haven’t) will forever be enthralled by these clouds of pink floss that forms a blossomy sensurround.

If you really want to crack the ice on cherries, eat them cold on a hot day, under a tree.

The cherry is a finicky fruit, a diva, if it were a shoe it would be Gucci, and it is surprising that any make it to the table at all when you think of all its foes and onerous demands; it is rather like having Madonna to stay, special water, special pillow etc. Cherries need well drained soil, a high-chill area, rain at special times, not too much wind (bruises their complexions). They are also vulnerable to bacterial canker and root rot and don’t talk to cherries about hail. Luckily the shortness of the growing season (about 60 days) makes it possible to grow these highly prized fruits, going for £15 for 2 kilos in Selfridges Food Store, London.

In ancient mythology the fruit of the cherry tree contains the elixir which gives the Gods their immortality. In Chinese lore it was believed that the magical Phoenix slept on a bed of cherry blossoms to bless it with ever-lasting life. In old Buddhist stories, the cherry is representative of fertility and femininity. For Neil Diamond it was more fundamental, hey, she got the way to move me, Cherry, She got the way to groove me.

Some fervent cherry aficionados who live in the mountains of Europe even make cherry wine which is about as time consuming as having a baby. A friend says it makes you highly lit and slightly sick for days. Brings to mind some Russian priests I once saw drinking cherry wine in the snow in Switzerland and then getting up and dancing with wild abandon until they all fell down in the snow.

The good news for cherry lovers is that we have some very good cherry farms in the Cape, largely because of that famous plateau, the koue bokkeveld which provides a fretwork of glorious high land where cherries are at last satisfied. In just one year between 2017 and 2018 planting increased by 25% to a total of 388 ha. There are around 30 cherry production units in South Africa, managed by 23 commercial producers, with a total cherry production of just over 1,000 tonnes in the 2018/19 season. Like champagne this niche market is best grown in chilled highlands.

A famous cherry farm is Esperanto in the Koue Bokkeveld, part of Witzenberg Properties, anyone who has attempted the Witels trail will acknowledge this terrain with its swift flowing rivers and steep uplands as perfect for the fussy cherry. The estate manager, Derick van Zyl, says they started off with 1,100ha planted to pome and stone fruit and the area under cherry production has gradually increased to 22ha.

Another famous cherry farm, well worth a visit is Nooitgedacht where the Du Toit family have been producing fruit in the Western Cape for 120 years. Owner says, “Different varieties of cherries are grown and harvested at different times.” They are harvested one by one at peak eating-quality time and when their looks are great. Their aftercare is five star, kept in cold containers,they have their own cold rooms and are packed in water so as not to bruise.

The last few years have been unpredictable for this high toned fusspot fruit but this year has been a bumper year and the cherries have real allure and are amped with a plumpness and flush that every cosmetic manufacturer would envy.