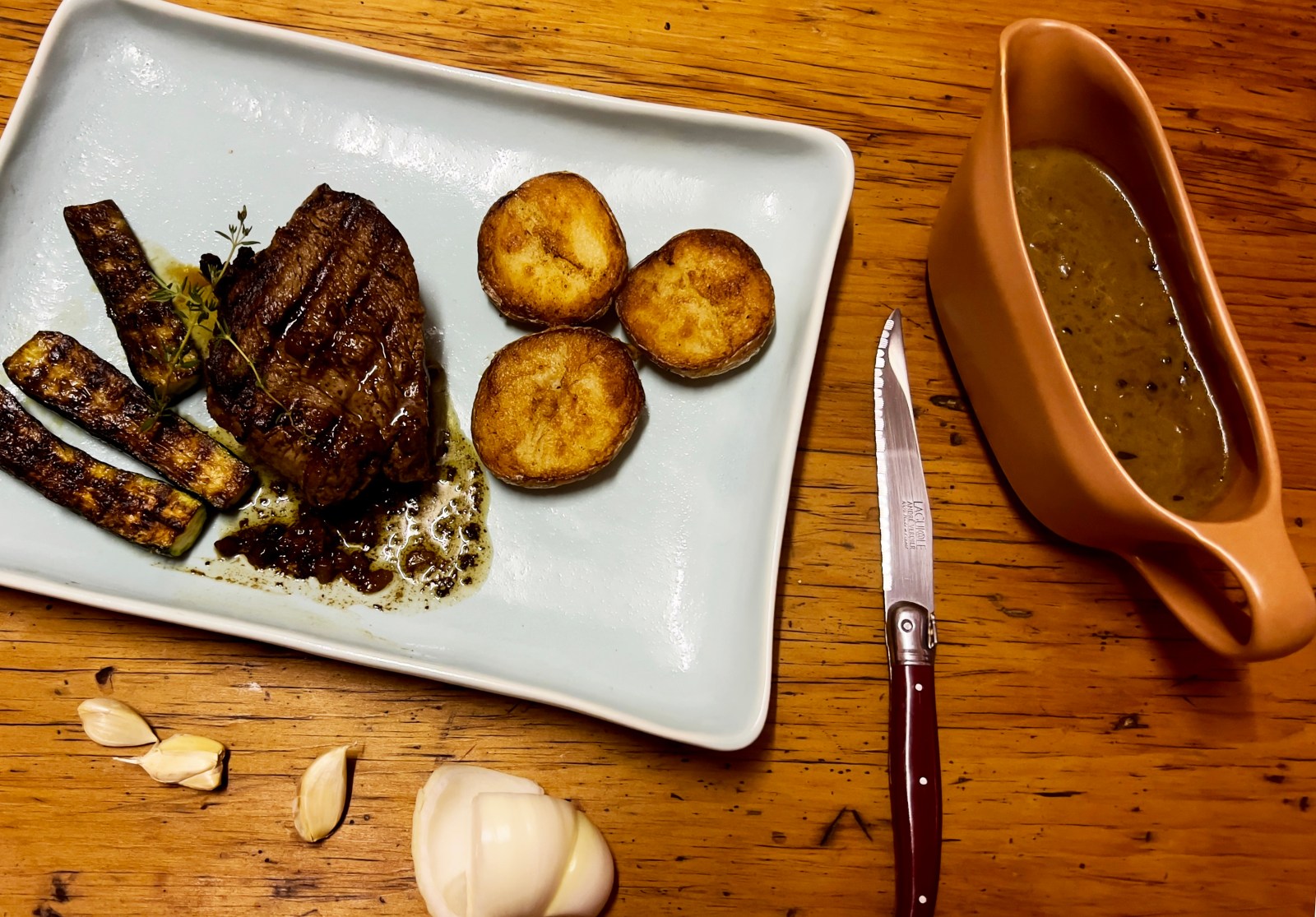 The famous old sauce beloved of steak aficionados, usually termed simply peppercorn sauce, or pepper sauce (not to be confused with North America’s ubiquitous ‘hot sauce’), and the classic dish called Steak au Poivre are not exactly the same thing. One is all about the sauce, the other about the steak.

History takes very long walks with some recipes. Apicius, the collection of ancient Roman cooking and recipe knowledge, recorded that using pepper for meat would mask the odour of meat that was on the turn. This does not mean that we can claim peppercorn sauce, or steak au poivre (they’re not precisely the same thing, but we’ll get to that), as having Roman origins. But the thought, at least, was there even in the 1st century AD.

It’s more likely, arguably, that steak au poivre rocked up only in the 19th century, in bistros in Normandy, where French gentlemen of note, if not of restraint, were thought to take their lady friends in the hope that the supposed aphrodisiac properties of pepper would inflame them before retiring, presumably with said gentleman in tow. Like many apocryphal stories, that one doesn’t quite have the assured ring of truth about it.

Unless we take the word of one Émile Lerch, who, in 1950, said he had invented the steak au poivre in 1930 while he was working in the kitchen of Restaurant Albert in the heart of the theatre district in Paris. Taste Atlas reports that Lerch claimed that the sauce was inspired by a shipment of lacklustre frozen American beef, which he decided to coat in peppercorns to get some fire into the dish. Whether his claim is true or not, fire it sure has. It wasn’t long, however, before all manner of other Parisian chefs cried merde! Non non non, it is my recipe, they declared. Perhaps safer to term it the preserve of a collection of Parisian chefs.

A steak au poivre in the French tradition is usually a fillet mignon coated with cracked black peppercorns and then fried. The peppercorns serve to form a crust for the steak. In a peppercorn sauce, by comparison, the peppercorns are cooked into a cream sauce, usually with the addition of alcohol such as Cognac or brandy, often with a herb. Garlic and shallots or onions are often used. In the au poivre cream sauce tradition, similar ingredients are used but the pan in which the steak has already been cooked is used for the sauce, by deglazing the pan with Cognac or wine, and reducing those juices down. Cream is then added and it bubbles away voluptuously until the sauce has thickened.

My recipe here is my bid to create a peppercorn sauce as good as the best once I’ve ever tasted, which comes in a tall ketchup jar from Sense of the Karoo. If you spot it at a farm stall, grab a bottle, it is fine indeed. Packed with flavour, deep and luscious. I’m happy to say that this time my sauce was a good match for it; not so much my previous attempt a few months ago.

There are four aspects pertaining to what I think has made the difference: plenty of peppercorns, plenty of Cognac, time, and a good splash of Old Brown sherry (which we’re not supposed to call sherry but what are they gonna do, shoot me? It’s ours and it’s SHERRY!!! There you go.

Don’t be shy of the strength of the peppercorns. Push it as far as it will go without the peppercorns becoming overpowering and the sauce bitter. The key is to achieve balance between the bite of the pepper, the sweetness of the alcohol and the taming underbelly of the herbs.

Be brave with the Cognac (or brandy). It needs a good whack of it to counter the strength of the pepper. Also be generous with your chosen herb. There’s a lot of flavour for the thyme, tarragon or rosemary to stand up to.

In short, this is a powerful sauce, so it’s not about its subtlety, which is not to say restraint should not be employed. But erring on the side of caution is not the way to go.

1 Tbsp butter (for the onions/shallots)

3 Tbsp butter (for the steak)

Melt the butter in a heavy pan and add the chopped onions/shallots and garlic. Fry gently, stirring, until softened. Add the crushed peppercorns, ground pepper, thyme leaves and beef stock, bring to a simmer and briskly stir in the mustard.

Add the Cognac and SHERRY, bring back to a simmer and cook until reduced by half. Give it time and make the heat slow and kind. That slow touch will bring up all the flavours.

Add the cream and bring it to a gently rolling bubble, simmering gently until it becomes perfect and impossible not to taste. This is key, because this is what is going to create that luscious, creamy sauce. Season to taste with salt. Taste and decide whether you’re happy with the flavour balance. If you need to you can add more of either or both liquors and cook it a little longer. Just be sure you get the creaminess back to the sauce.

Meanwhile, cook the steaks to your liking. I served them with skillet-grilled halved courgettes and scalloped fried potatoes. DM/TGIFood