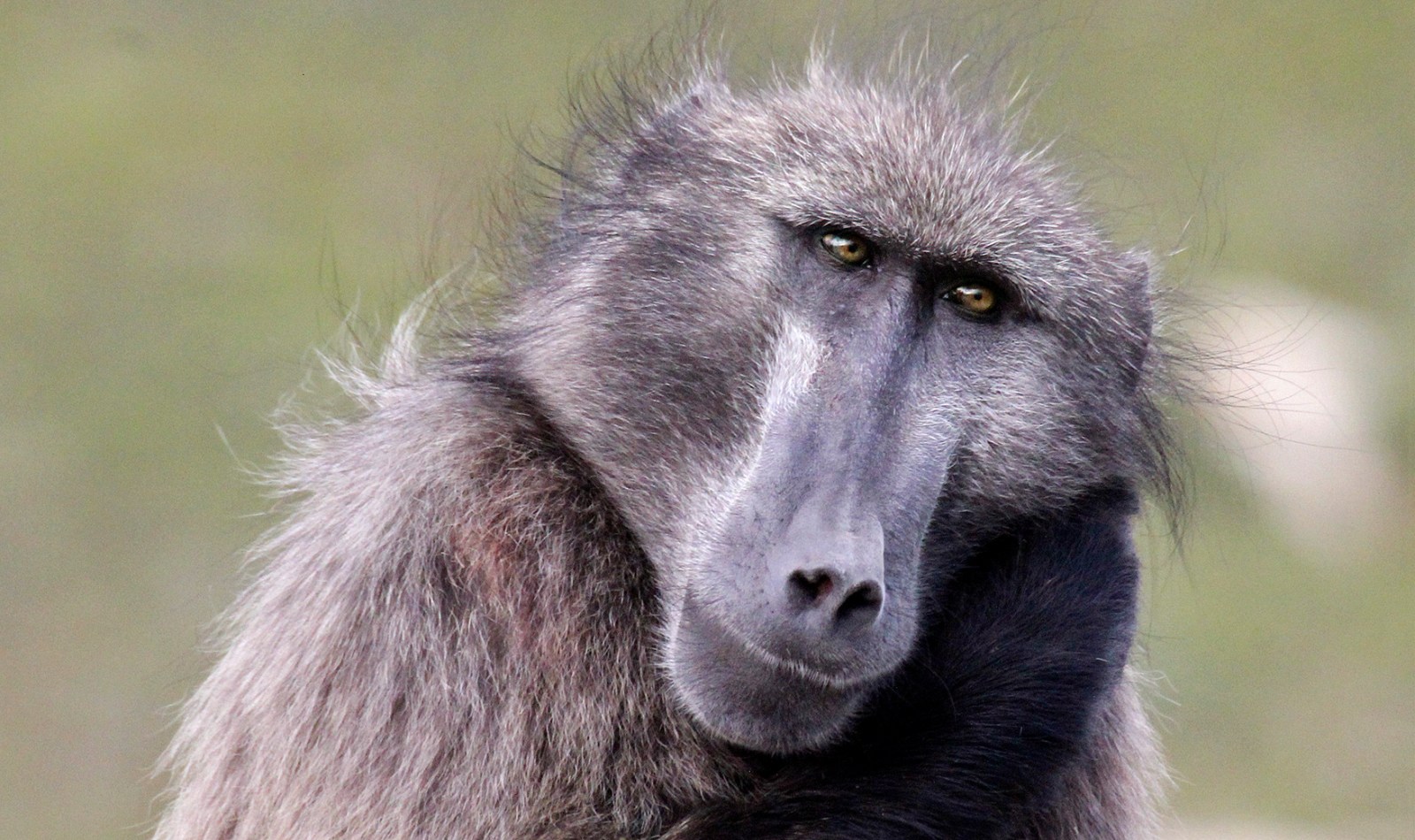 Scott is the latest young dispersing male baboon of Cape Town, a lad leaving his natal troop to go forth and find a new group of baboons to join; to start his own family unit — as simple as that, really.

The problem is that the Cape Peninsula baboons are a closed population, cut off from all other baboon troops by dense urbanisation and a rapidly growing human population, many of whom know little about baboons or wildlife.

Despite some misunderstandings between the species, the vast majority of humans are actually quite thrilled to see a baboon — most residents are delighted by the unexpected arrival of a big boy and quite happy for him to move through their gardens on his way.

The problem sits squarely with the management of baboons and the protocols that have been designed to streamline the management process — one that is flawed for too many reasons to delve into in this short article. The underpinning problem is the adherence to outdated criteria which determine how baboons should be managed, but which pay little attention to how humans should be held accountable for their actions.

Baboons are baboons: opportunistic, clever, adaptable and survivors of extreme emotional typecasting, vitriol and abuse. It is difficult to think of another species that has been so appallingly treated by humans.

We agree it is best for people and baboons alike that baboons do not spend time in urban areas, yet little to no effort is made to control waste management or adapt methods so that we can best achieve this commonly held goal. Instead, management has been driven by simplistic thinking that says “we need to hurt or scare baboons to keep them away from easy food rewards — the landscape of fear model”.

That system has not worked in rural areas where farmers shoot baboons and it does not appear to be working in urban areas where baboons are shot at with paintball guns and subjected to loud noises from bear bangers. I say this because baboons continue to come into areas occupied by humans.

Yet management persists and defends its decision-making, or lack thereof, and the result is that yet another baboon is killed.

One of the urgent changes that needs to be made to management is the concept of removing individual raiding baboons; the thinking that one baboon will influence a whole troop to adopt bad behaviour.

We need to understand and accept that the Cape Peninsula’s population of baboons, and indeed many others, have been living in close proximity to humans for years now, and all baboons now know that spaces occupied by humans equates to easy food rewards.

All baboons, from the very youngest to the oldest, know there is a lot of good food to be found in our waste. All baboons know where the easiest sources of food can be found; it is astonishing to see how rapidly troops will move to spots where they can quickly secure easy “grab-and-go” grub — and equally astonishing how little humans have done to remove these attractants.

At least 80 baboons have been removed but the attractants remain — and the troops keep coming down off the mountain to eat.

Back to Scott: how does all of this affect this young dispersing male?  Like most other males, leaving his natal troop is not a quick process; he will separate and return for an indeterminate period of time. When he finds a new troop there may be dominance fights with the current alpha, or there may be a relatively easy introduction into the new family groups — we can’t predict those outcomes.

What we can predict is that due to urban sprawl around the national park, the males will come into contact with residents. We can predict that some residents will be fearful. Some may feel the need to attack what they perceive to be a scary-looking creature. A few people may feel sorry for him and want to feed him. But most will be happy for him to cruise the ’hood and move on.

We know this, yet little is done to proactively communicate with residents so that they better understand and can expect dispersing males — and then behave appropriately.

The current guidelines and protocols are especially impactful for dispersing baboons. Under the current systems, a dispersing male can quickly be labelled “problematic”, and for this reason the decision-making really does need to be top-notch. If bad decisions are made, the baboon will be killed.

The current systems have allowed for too many bad decisions, and too many baboons have been killed (about 80) as a result, but residents are increasingly objecting to the flawed process and the issue of baboon management has become a “hot potato” that none of the authorities want to hold.

The City of Cape Town (CoCT) has been impressive in the allocation of budgets and service providers to mitigate the “nuisance factor” of baboons, but their meaningful effort is effectively scuppered by poor management who either make woefully bad decisions or, perhaps worse, no decisions at all.

Months ago, when Scott started dispersing, local groups and the Cape of Good Hope SPCA opened communications with the CoCT to make proactive suggestions. The troop of Da Gama Park had recently lost two adult males, so it was possible that Scott could be relocated there. He may settle or he may not, but it is a good possible choice.

In the ensuing weeks, many efforts have been made to encourage CoCT manager Julia Woods to “make a plan”. Her response has been slow: it involved more “monitoring” — and as the baboon stays in proximity to the urban area and accumulates a “raiding history”, the chances of him being killed escalate.

From Scott’s point of view, he has not behaved in an untoward fashion, but extremists accuse him of aggressive behaviour and the baboon has reportedly been stoned and chased by sjambok-wielding residents. The extremists have also made exaggerated appeals to DA ward councillor Simon Liell-Cock, and it is those vitriolic folk who appear to have his ear and who will persistently call for Scott to be executed.

On a national level, conservation currently views baboons as a species “of least concern” and it is this paradigm that filters down through management planning and decision-making. By this thinking, Scott is an animal of least concern. He has no conservation value to the ecological system and therefore is disposable.

We will not be able to get municipal managers, officials or some gun-toting residents to stop the indiscriminate killing of baboons while the outdated rhetoric continues to govern management guidelines, and we will have to work even harder to get acceptable systems in place.

In the meantime, Scott is our concern and he should be the City of Cape Town’s concern as they surely would not want more poor decisions to exacerbate tensions between authorities and worsen divisions among neighbours.

I started with an SOS appeal, and it is indeed our souls we need to save. How can we think about living well-intentioned, productive and balanced lives when, in our midst, animals are so poorly perceived and treated?

We cannot accept ongoing aggression and violence towards our baboon neighbours and overlook the shortcomings of our choices and behaviours. We can be good neighbours, not by having baboons in our homes, as antagonists mischievously suggest, but by behaving as a good neighbour would — in a mindful manner and with understanding of each other.

We must save our souls through better ways of being on this planet and as good neighbours to all. #SaveOurScott DM/MC/OBP

Jenni Trethowan has championed the rights of baboons in Cape Town for 25 years. In 1990, following the culling of a troop of baboons in Kommetjie, she, with Wally Petersen, formed the Kommetjie Environmental Awareness Group (KEAG) which successfully lobbied for the protected status of baboons on the Cape Peninsula. In 2001 she left KEAG to start Baboon Matters, focusing on creating awareness for the plight of baboons living on the urban edge. She has since featured in more than 40 documentaries, received numerous awards, published a book and been personally commended on her work by Dr Jane Goodall.