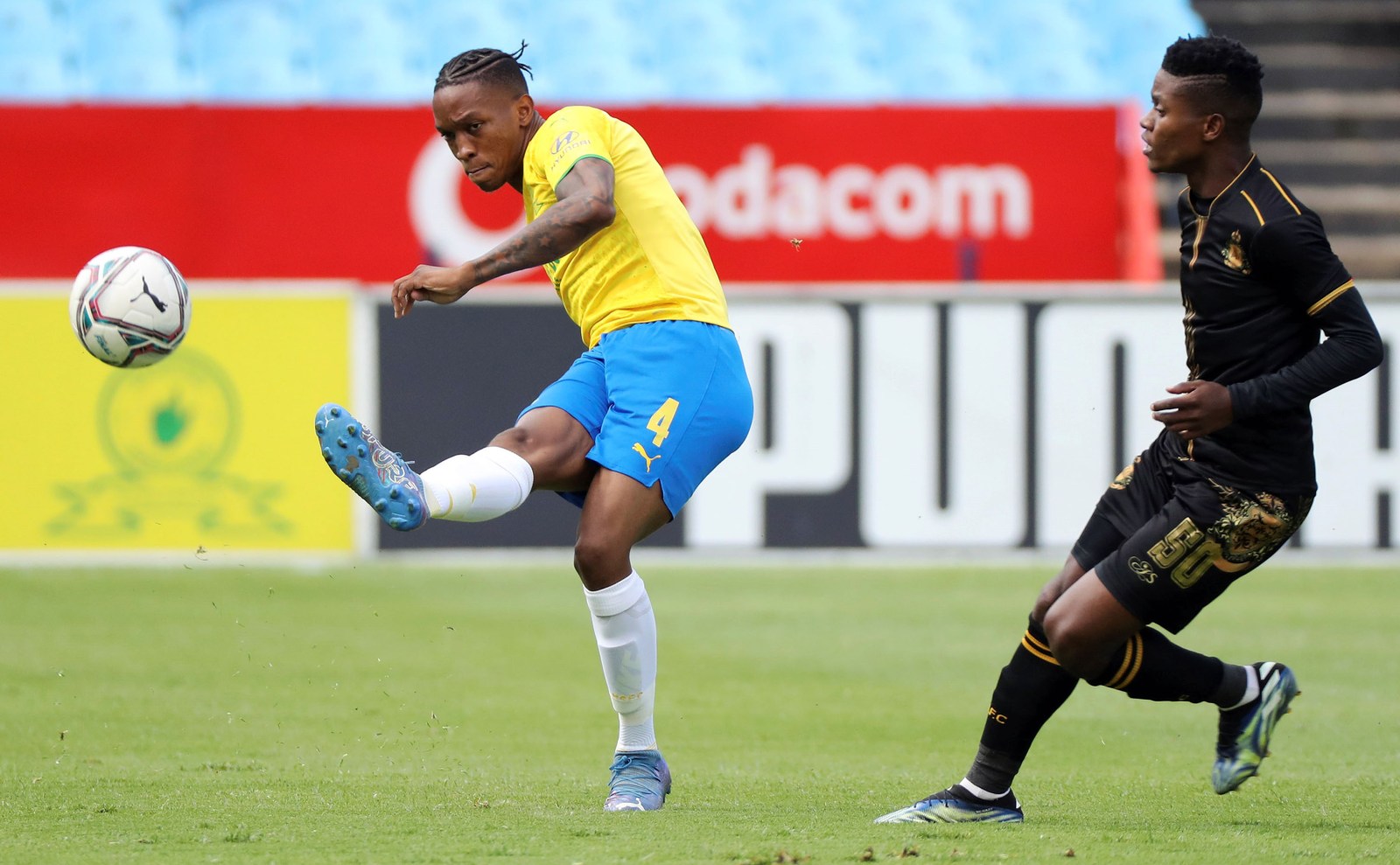 Grant Kekana of Mamelodi Sundowns against Menzi Masuku of Royal AM during their DStv Premiership match at Loftus Versfeld Stadium on December 8, 2021 in Pretoria, South Africa. (Photo by Gavin Barker/BackpagePix/Gallo Images)

The Brazilians maintain their undefeated reign after 14 DStv Premiership matches. Meanwhile, Kaizer Chiefs missed another match as the team continues to deal with a Covid-19 outbreak in their camp.

With the Christmas break and the halfway mark in the league fast approaching, the teams in the DStv Premiership added more games under their belts.

Runaway log leaders Mamelodi Sundowns extended their lead at the summit after securing a hard-fought 3-2 win over Royal AM in Tshwane. Two men vying for the Lesley Manyathela Golden Boot — Peter Shalulile and Victor Letsoalo — were on target with a brace each for their respective teams.

Shalulile’s two strikes took his tally for the season to 11 goals from 14 games, while Letsoalo is second, trailing his Sundowns counterpart by three strikes.

However, one of Letsoalo’s strikes came from yet another glaring refereeing error. Referee Thando Ndzandzeka punished Rushine de Reuck for an apparent handball from a cross by Motebang Sera. This despite the ball striking the Bafana Bafana defender in the midriff.

“Everyone saw the events that took place on the pitch. It’s not for us to complain, but rather focus on making sure we improve the performances,” he added.

The gap between the defending champions and second-placed Sekhukhune United is now at 11 points after Babina Noko lost to Marumo Gallants, thanks to a solitary strike by Joseph Malongoane.

Those three points were crucial in ensuring that Gallants, currently in 12th spot, maintain some distance between themselves and others looking to stave off relegation.

Relegation candidates close to the halfway mark of the season, Swallows and Baroka, faced off. The Dube Birds picked up a vital three points after defeating Baroka 1-0.

The win, courtesy of a Keletso Makgalwa goal in the second half, was only Swallows’ second win of the season. It moved them to 14th place; although they have played a game more than both second-bottom Chippa United, as well as basement dwellers Baroka.

It takes a village to play a match

Meanwhile, Kaizer Chiefs confirmed on Tuesday that they would not be able to honour their second fixture in a row after a Covid-19 outbreak forced the closure of their training centre — the Kaizer Chiefs Village. They were scheduled to face Golden Arrows in Durban on Wednesday night.

This came after the club announced that 31 people had tested positive for the virus last week. Despite the Village tentatively resuming its activities this week, Amakhosi still do not have enough personnel available to play matches.

Moreover, the club announced that another five people had tested positive for the virus following more testing.

“Repeat testing was implemented over the past 48 hours for players and staff who were in quarantine. These tests, unfortunately, revealed five more cases, which justified the approach taken by the club in terms of our responsibility to our players, staff and to the football community,” said Amakhosi’s team doctor, Hashendra Ramjee.

“This shows us why it was important for the team to temporarily avoid playing or interacting with others as this could potentially cause the virus to spread beyond the club — which is an undesirable situation for all involved”.

Despite the match appearing as ‘postponed’ on the Premier Soccer League’s website hours before kickoff, Arrows arrived at their home stadium to honour the fixture.

Chiefs are scheduled to face Sekhukhune on Sunday, 12 December. If the words of Ramjee are considered, this is yet another fixture they might be forced to forgo.

“Players who have tested positive and completed their self-isolation will be managed with an evidence-based graduated return to play protocol and algorithm used for any athlete,” said the Amakhosi doctor. “Depending on the player’s progress during this managed phase, the player would usually be fit to resume play in seven days.” DM