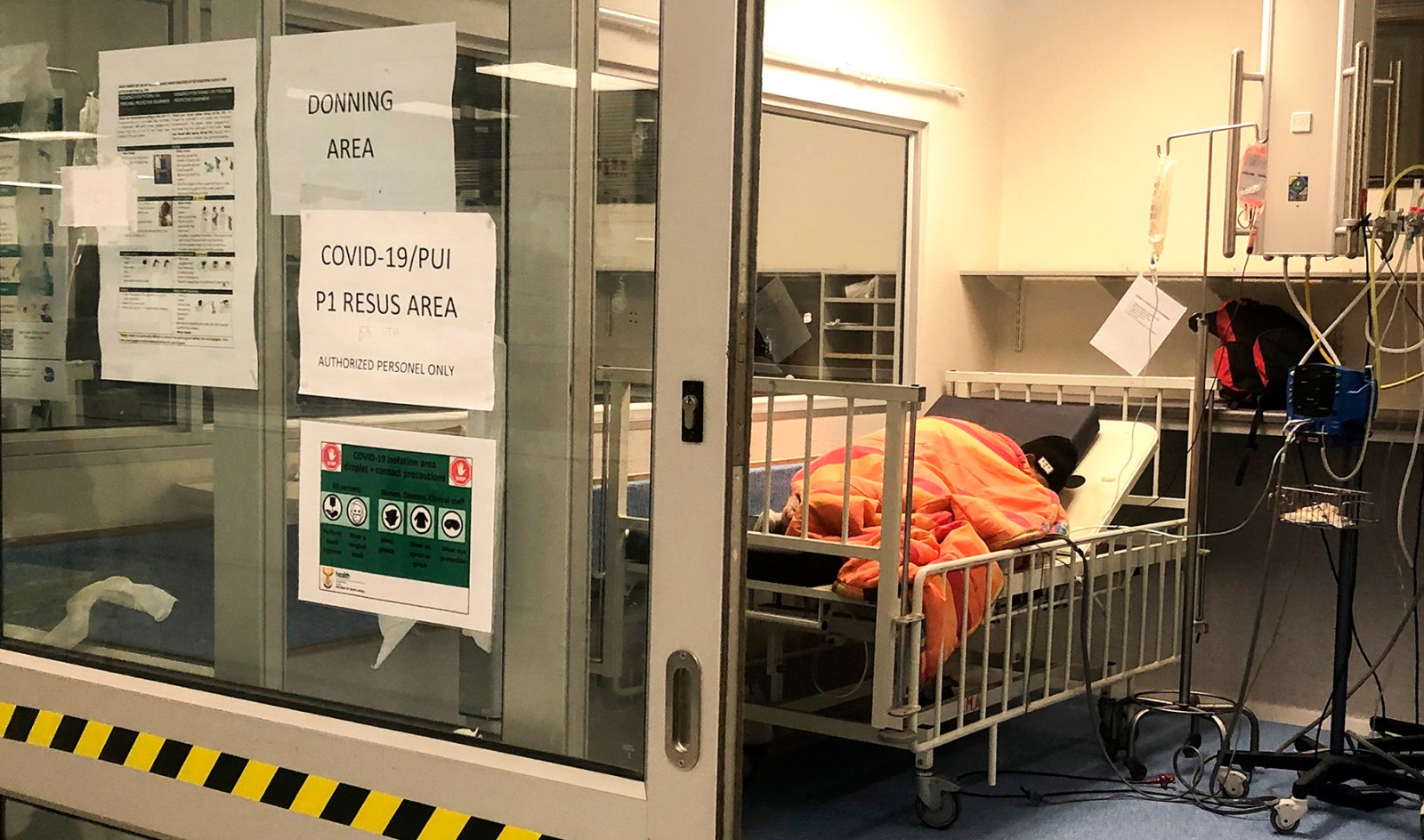 Recruitment of hospital staff has been halted, supplier accounts frozen and doctors have been informed that certain consumables are no longer available — all while a struggling Eastern Cape Department of Health limps into the province’s fourth wave.

Security guards abandoned their posts en masse at Gqeberha hospitals and clinics on Tuesday and the Eastern Cape Department of Health informed staff that no final-year community service doctors would get posts in hospitals because the adjustment budget, delivered earlier in the day, had not significantly improved the financial situation of the beleaguered department.

According to a memo sent to staff, the cost of employment funding will only cover staff who had been in the personnel system on 30 November, as well as certain adjustments, overtime and limited recruiting.

“The department is unable to provide for replacement posts and/or appointments beyond 30 November 2021. Therefore any offers of employment in the pipeline should be held back,” says the memo, adding that certain senior management positions, including the post of CEO — vacant for four years — will be filled.

The appointment of doctors who had completed their community service and were to fill posts at the state hospitals was also halted, but departmental head Dr Rolene Wagner promised to engage further on this issue.

As a result, all orders were sent back to supply chain management.

The memo, sent to top management at the hospital, warned that doctors might not have what they need to save patients’ lives. It is understood that several suppliers of specialist medical equipment have suspended the hospital’s account because of non-payment.

“I am concerned,” the memo warns, “as some suppliers supply critical items that are needed to save the lives of our patients.”

Before the delivery of the adjustment budget, Wagner said: “Part of our preparations for the anticipated fourth wave includes ensuring we have adequate beds in readiness for Covid-19 hospitalisation. The department embarked on 85 infrastructure projects valued at R590,428,636 awarded to EC-based contractors for the refurbishments of health facilities in the past year to enhance our bed capacity.

“Through this process the province has already increased the available beds by 2,029 additional beds. A further 608 beds are anticipated to be realised in the period ahead.

“The department also improved the oxygen reticulation at 32 faculties — either upgrading or newly installing oxygen supplies. A further 12 facilities had bulk oxygen tanks installed… procured medical equipment like ventilators, oximeters, oxygen concentrators to supplement the Covid-19 response. Our PPE levels are at over 85% and are closely monitored to ensure regular routine supply at our facilities.

“The department has appointed over 11,000 employees on a contractual basis to be part of the pandemic response. The majority of these contracts are valid until the end of March 2022.

“The department is facing serious fiscal challenges during this time, but the engagements are continuing, including with our private sector/NGO partners to ensure we have adequate staff cover during the resurgence.

“The contracts for 2,749 healthcare workers have been extended to the end of December 2021, and the balance of the almost 8,000 contract workers will continue until the end of March 2022.

“Hospitalisation decreased significantly in the third [wave]… likely due to a combination of factors which includes the protection conferred by vaccination. We do want to stress that over 95% of hospitalised patients were those who were not vaccinated at all.

“We have 2,748 healthcare workers who were brought in to supplement our efforts against Covid-19. The province has 862 beds for patients under investigation (isolating while waiting for Covid-19 test results), 414 beds for patients with Covid-19 who are asymptomatic, 2,242 general beds and 366 critical-care beds.”

These beds are in public facilities distributed across the province.

Commenting on the extremely high death rate in the province during the first two waves, Wagner said: “The assessment we conducted in our province over the past few months indicates that our communities present themselves to health facilities very late.

“On further analysis we discovered that there remains a stigma attached to being hospitalised for Covid-19, with most people preferring to use their home remedies to manage the Covid-19 symptoms.

“We have embarked on a programme through our risk communication and community engagement strategy to encourage people to seek medical help as soon as they develop symptoms of Covid-19. This is particularly important for those people who are most at risk of severe Covid-19 and even death.

“We also rely on our newly appointed mayors and ward councillors; and religious and business leaders to take up the campaign to vaccinate and adhere to the non-pharmaceutical interventions.”

Cases are rising fast in the Eastern Cape, with 2,056 active cases across the province on Wednesday — 549 more than the previous day. Buffalo City (589 cases) and Nelson Mandela Bay (579) accounted for more than half of the province’s cases.

This week the National Institute for Communicable Diseases confirmed that positive cases caused by the highly transmittable Omicron variant of the coronavirus had been found in the province.

Preliminary data from other provinces have indicated that fewer people had been hospitalised for Covid-19 complications caused by Omicron than was the case with previous variants.

Premier Oscar Mabuyane on Wednesday called for strict adherence to non-pharmaceutical measures such as the wearing of masks and sanitising of hands as the positivity rate in the province made an alarming jump from around 2% of cases to 9.2% in 24 hours.

The new cases include about 25 youths who tested positive for Covid-19 at a healthcare centre in Cofimvaba. They had presented themselves at the health centre for medical examination ahead of undergoing the traditional rite of circumcision.

“These numbers are alarming… 25 boys in one centre. We want to appeal to them to follow the advice of health practitioners and delay circumcision until they are in good health,” Mabuyane said.

This week, in her audit report for the province, Auditor-General Tsakani Maluleke said the Eastern Cape Department of Health had paid R2.05-billion in irregular expenditure, of which the bulk was for medico-legal claims.

“The department has an approved overdraft facility of R1,000-million to help it pay these medico-legal claims, which are not within its budget. There has also been an increase in instances of the department’s bank accounts being attached due to attorneys approaching the courts. This means that at specific points the department may not be able to transact in its own bank account, and has resulted in funds being transferred from other service delivery areas to pay for these medico-legal claims.

“The department also paid R921-million, including interest, relating to medical claims in the current year, while R450-million was awaiting payment (accruals and payables not yet recognised) at year-end. This has reduced the department’s total budget for service delivery areas,” she said.

“Of this amount, R45-million is allocated to the department as part of the Presidential Youth Employment Initiative for health staff and nurses providing assistance in the roll-out of Covid-19 vaccines and attending to duties in high-care units.

“We also allocated an additional funding of R369-million  for [salaries] and non-salary costs pressures experienced by the department, with the condition that the department prioritises the payment of small and medium businesses who have rendered services to the department, to address the pressures resulting from the 2020/21 accruals and payables.

“Whilst rightly reprioritising our budget to improve health outcomes, we are concerned that the provincial government continues to spend an ever-increasing proportion of its financial resources on settling medico-legal claims… diverting funds otherwise meant for delivering healthcare services,” he said.

Retief Odendaal of the Democratic Alliance said the ballooning civil servants’ wage bill remains the elephant in the room, with nearly R2-billion, or roughly 53% of the total additional allocation in the adjustments budget, allocated to cover the cost of their employment.

“This ANC government continues to pay millionaire salaries to deployed cadres in administration, while critical frontline posts in health and education remain unfilled.

“Unfortunately, MEC Mvoko has made no pronouncements on ways and means to curb the rising cost of employment of government officials, nor on the long-expected rationalisation of provincially owned state entities.

“Although the bankrupt Department of Health received some reprieve, in the form of an additional allocation of R1.3-billion, this is still not nearly enough to ensure that this beleaguered department meets all its financial commitments during the current financial year,” Odendaal said.

Neither MEC Nomakhosazana Meth nor senior administrative officials responded to further questions on the financial state of the department. DM/MC