Why you should read ‘Our Ghosts Were Once People’ 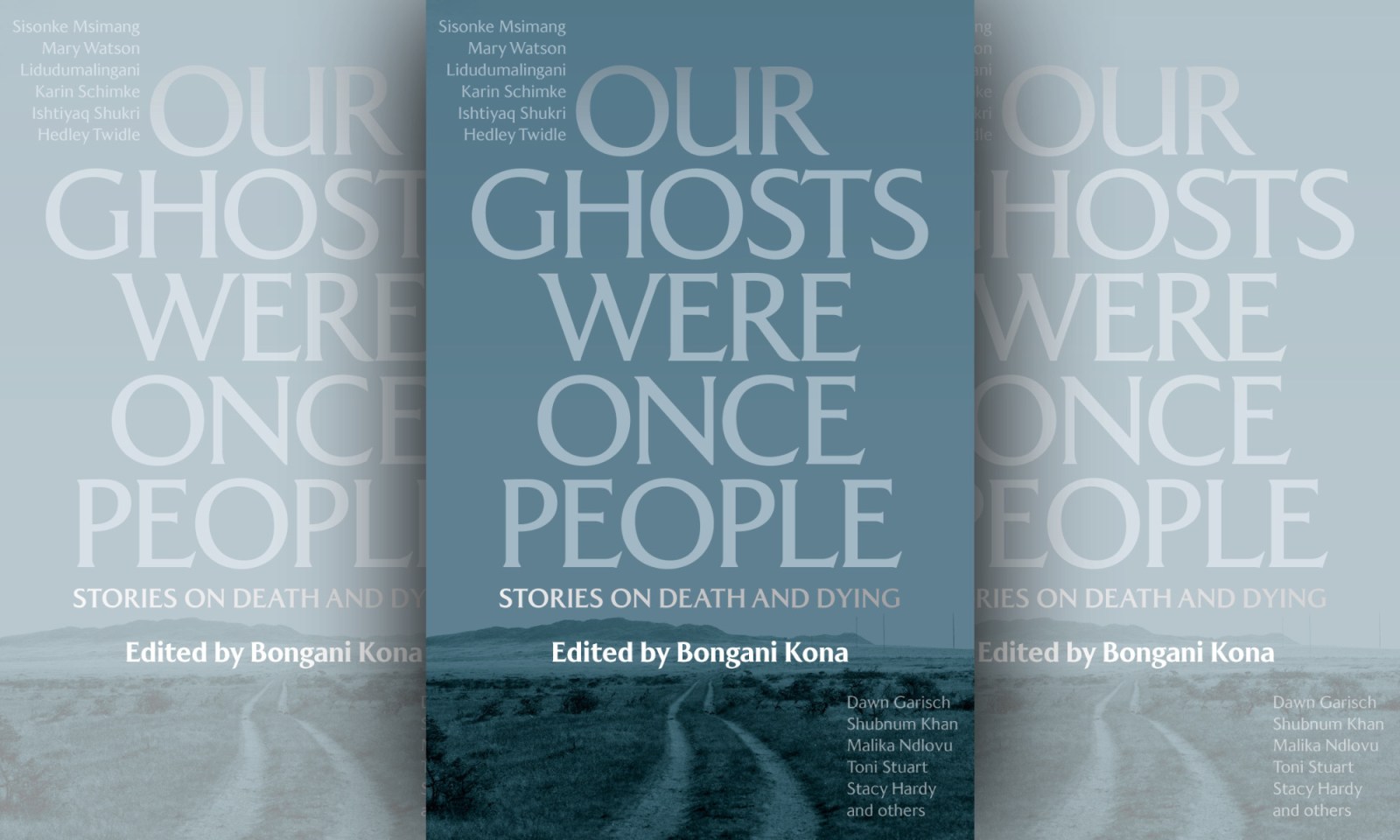 "Our Ghosts Were Once People" book cover. Image: Supplied

It’s safe to say that thinking about death and dying is generally not soothing to the psyche. And yet, in ‘Our Ghosts Were Once People’, edited by Bongani Kona, the precarity of our life becomes an empowering subject.

When we venture down the slippery path of staring into the mirror of mortality, we see how short and precarious life is, forcing us to frantically reach out for our anti-anxiety seatbelts. Just think about it – you wake up one day feeling listless. But, it’s a nice enough day and the sun is shining. You do your morning mantra and start to think, ‘Okay, great, things might just get better’. You put on your big-person sparkly shoes, ready to face the world.

Then, you see that the cat has thrown up on the kitchen floor, read the news, scroll through TV channels, and you suddenly remember, ‘we’re all going to die one day’. So you take off your sparkly shoes, get back into bed and pull the blanket over your head.

Terror management theory concerns the psychological conflict that erupts when engaging with the fact that death is inevitable and unpredictable.

Psychologists argue that we then revert to self-preservation mode in order to manage the terror, largely through escapism techniques and cultural practices that render death and the dying invisible. This is exactly why stories about death are important – both to help us deal with grief when we have suffered loss, and to think about the notion of our own mortality in constructive ways. We have to give airtime to death.

Rebecca Solnit in The Faraway Nearby reminds us that we are all the heroes of our own stories. One of the arts of perspective is to see yourself as playing a small part on the stage of another’s story, to see the vast expanse of the world that is not about you, to see your power, to make your life, to make others, or break them, to tell stories rather than be told by them.

Our Ghosts Were Once People, edited by Bongani Kona, is an important resource in storytelling about death, and holding on to those who have left us, while simultaneously letting them go. Kona says the seed for the book was planted when UCT student Uyinene Mrwetyana was killed in 2019. “I remember when the posters went up after she’d gone missing. Her face was everywhere on Main Road Rondebosch. I remember the sinking feeling that this was not the kind of South African story that ends well. And it didn’t. The whole thing was just so heartbreaking it deeply affected so many people.”

The stories in Kona’s collection are rich and varied. Kona’s vision for the collection was to bring together a group of writers to explore the concept of death from a variety of different entry points.

“We live so much with loss, but we don’t talk enough about it,” he says. And there certainly is much to talk about when reading Our Ghosts Were Once People.

Karin Schimke’s visceral account of dealing with the death of her father who was physically and emotionally violent. Lucienne Bestall’s gripping reminder that “We should spend more time with the dead; to be still beside their stillness, to study their faces, to share their silence. To become familiar with death and what death looks like”.

Sindiswa Busuku’s journey back in time, remembering her visits with her dying father in hospital. He was too ill to talk and when he did, he would beg her to bring his gun to end his pain; Khadija Patel’s iridescent account of the Islamic rituals of bathing and shrouding the dead; Shrikant Peters’s chilling account of his internship as a medical doctor at a Durban hospital when a patient dies because of inadequate resources and infrastructure.

Or Sudirman Adi Makmur’s story about the “economy of the dead” and his job in travelling with bodies where he recounts journeying with the body of a Sudanese refugee who was killed in Egypt – of trying, in vain, to get the body back to the family. Dela Gwala’s heart-wrenching account of her grief when her cousin dies after an accident: “I couldn’t understand how everyone could be standing around Pick n Pay picking out pasta sauce and choosing breakfast cereals when you were gone.”

And then, of course, there’s Kona’s own harrowing account of the impact of the war in Zimbabwe. He tells of its personal cost – Kona’s grandfather was abducted and killed in 1979. He also brings to the fore the societal impact of the massacres and “skeletons that littered the countryside” as a result of the feud between the Zimbabwe African People’s Union (ZAPU) and the Zimbabwe African National Union (ZANU).

The collection also includes some effervescent poetry. Gabeba Baderoon’s skilful way of using few words to give us a rich, luminous gaze into the woman her mother was. Musawenkosi Khanyile’s poem, What the Township Did to Us, is a short, sharp piece about the ways spatial inequality writes itself on people’s lives.

Thato Monare’s collection of photographs of houses is a project Monare started after seeing houses in Diepkloof defaced with the words “This house is not for sale”. The houses are marked in this way when there is conflict within a family after the death of an elder. In an effort to avoid the sale of a family home before the feud has been resolved, the houses are marked to discourage potential buyers. The piece speaks to how death can pop open the cork of underlying tension within families and how the battle over “who gets what” can show up the worst in human nature.

Kona has managed to put together a collection in which all the stories are of high calibre – no easy feat. Whether you want to think more mindfully about death as a concept or need something to cling to in the face of loss, the book is a good resource. Life and death are symbiotic in the human experience, as Lucienne Bestall reminds us in her quote from Sharon Olds (The Dead and The Living, 1983):

the dead, I am not apart from you,