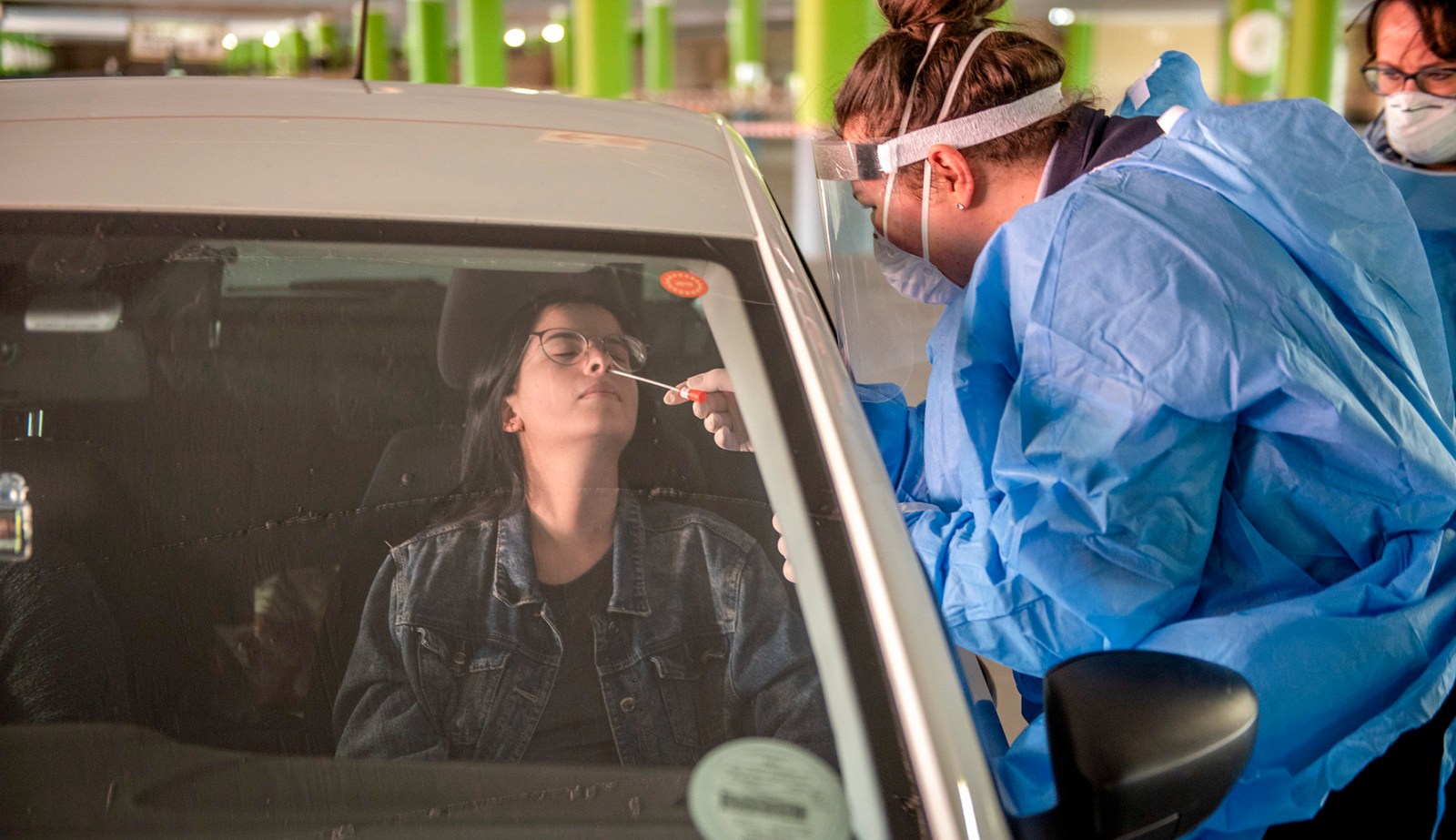 Covid-19 testing has increased dramatically, especially in Gauteng where one in 1,000 people have been lining up to get tested for the virus. (Photo by Gallo Images/Alet Pretorius)

Dr Richard Friedland said that virtually all patients had presented with mild to moderate flu-like symptoms, including a blocked or runny nose, headache and a scratchy or sore throat.

South Africa registered a high rate of Covid-19 tests in the past week as the latest outbreak of coronavirus infections spread through the country.

According to the NICD:

On Wednesday Dr Richard Friedland, chief executive officer of Netcare, said that almost a month after the identification of the Omicron variant in South Africa, data across its hospitals and primary healthcare facilities indicate that Covid-19 symptoms now are far milder than the first three waves.

“Having personally seen many of our patients across our Gauteng hospitals, their symptoms are far milder than anything we experienced during the first three waves,” Friedland said.

“Approximately 90% of Covid-19 patients currently in our hospitals require no form of oxygen therapy and are considered incidental cases. If this trend continues, it would appear that, with a few exceptions of those requiring tertiary care, the fourth wave can be adequately treated at a primary care level.”

Friedland said that in the first three waves of the pandemic, Netcare treated 126,000 Covid-19 patients across its 49 acute-care hospitals, of whom 55,000 (44%) required admission and 26% were treated in high care and intensive care units.

“Significantly, all Covid-19 patients admitted were sick and required some form of oxygen therapy. The high admission rate, as well as the high percentage of patients requiring ICU or high care is indicative of the severity of cases during the first three waves,” he added.

“As of today we have 337 Covid-19 positive patients admitted (72% of these patients are in the Gauteng area and 18% in KwaZulu-Natal). Of these patients, approximately 10% (33 patients) are on some form of oxygenation versus 100% in the first three waves. Eight of these patients (2%) are being ventilated and of these, two are primary trauma cases that are also Covid-19-positive,” he said.

“The very rapid rise in community transmission as compared to previous waves may partially explain this relatively low hospital admission rate… there does appear to be a decoupling in terms of the rate of hospital admissions at this early stage in the evolution of the fourth wave,” he said.

Of the patients admitted to Netcare hospitals and facilities since 15 November, Friedland said 75% were not vaccinated.

He added that there had been seven deaths in Netcare facilities due to Covid-19 complications.

He explained that virtually all patients had presented with mild to moderate flu-like symptoms, including a blocked or runny nose, headache and a scratchy or sore throat.

“It is our considered view at this early stage that, should this trend continue, Covid-19 may be effectively managed at a primary care level, with the exception of certain cases requiring admission to tertiary facilities,” he said.

Friedland’s observations are supported by those of Dr Fareed Abdullah, the director of the Office of Aids and TB Research at the SA Medical Research Council and a part-time HIV clinician at the Steve Biko Academic Hospital who worked as a member of the Covid-19 clinical team through the first three waves of the pandemic.

Abdullah published his preliminary findings on the clinical presentation of the Omicron variant over the weekend.

He looked at the symptoms and admission of 166 patients and found that patients were younger than in the previous 18 months, with 80% of admissions being below the age of 50 years.

“This is in keeping with the age profile of admissions in all public and private hospitals in Tshwane and throughout the Gauteng province in the last two weeks as reported by the NICD and the Gauteng provincial government. Of these, 19% were children aged 0-9 years and the highest number of admissions was in the age group 30-39 years, making up 28% of the total.

“A key question regarding the new Omicron outbreak is whether disease severity is similar, milder or more severe than with the other variants, given the large number of Omicron mutations.

“The best indicator of disease severity is measured by the in-hospital death rate. There were 10 deaths in the [patients studied] in the past two weeks, making up 6.6% of the 166 admissions. Four deaths were in adults aged 26-36 and five deaths were in adults over 60. One death was in a child in whom the cause of deaths was unrelated to Covid-19.

“There were no Covid-19-related deaths among 34 admissions in the paediatric Covid wards over the last two weeks. This compares favourably to the proportion of deaths at the complex over the past 18 months, which was 17%.

“Death rates over the last two weeks as well as over the past 18 months are lower than the overall in-hospital death rate of 23% for the country over all previous waves, as reported by the NICD.”

The latest epidemiological report for South Africa, issued by the NICD, said there was a 314.6% increase in the number of new cases detected in the past week as compared to two weeks ago.

Hospital surveillance indicated a drop in hospital admissions on Wednesday to 1,459, from 3,390 last week. There are currently 148 patients on ventilators countrywide and 4,252 people in hospital with Covid-19. Covid-19 related deaths decreased from 95 last week to 48 this week. DM/MC