The German ‘Traffic Light Coalition’ becomes a reality, ushering in a sea change in European politics 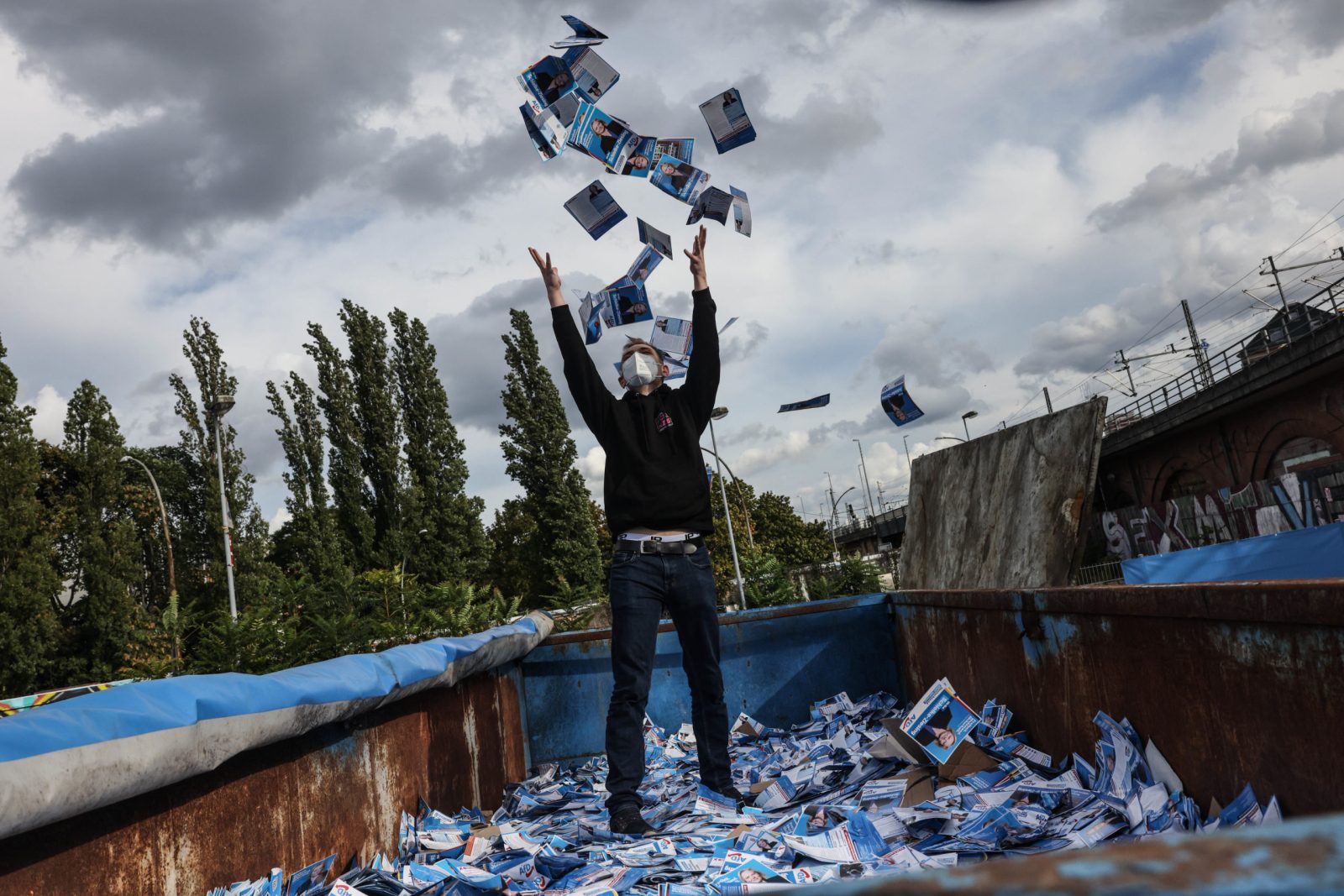 An activist in a rubbish container full of election flyers for the Alternative fuer Deutschland in Berlin on 30 September 2021. The emergence of the right-wing party has been offset by the emergence of a voting bloc for a progressive ecological and socioeconomic project. (Photo: EPA-EFE/Filip Singer)

What appears to be emerging in Europe’s largest economy is a political commitment to a progressive supply-side economic and ecological project. This could have far-reaching consequences for not only European politics but global politics.

The German elections in September 2021 produced no clear electoral winner and necessitated the formation of a coalition government. The Social Democratic Party (SPD), led by Olaf Scholz, has held coalition talks with the Green Party and the Free Democratic Party (FDP).

These negotiations produced a detailed document of 177 pages outlining the policy plans of the three-party governing coalition over the next four years. The document is called Mehr Fortschritt Wagen, which translates to “risk/dare more progress” and represents a play of words on Willy Brandt’s famous 1969 dictum to “risk more democracy”.

Many observers take a sceptical, even cynical, view of these policy negotiations, arguing that this is a coalition of unlikely bedfellows. The argument is that the “red/green/yellow” coalition is a marriage of inconvenience that is likely to end in acrimony.

Commentators pick up on some of the slogans and marketing phrases within the document to illustrate that this agreement is full of empty phrases and contains little substance. But this jaundiced view misses a few rather interesting developments in contemporary German politics, economy and society as well as the policy document itself.

What is emerging from these coalition talks is a commitment to a “social-ecological market economy”. The policy document, for instance, commits large tracts of land to the development of alternative energy sources to make Germany carbon neutral as quickly as possible. While the commitments to zero carbon emissions are usually seen as a Green Party platform, the fact is that both the SPD and – surprisingly – the FDP are as committed to this outcome as their Green Party colleagues.

The document outlines a commitment to fundamental structural changes in the German economy and society. And in that sense it signals a break with global neoliberalism, its German variant of “ordo-liberalism” expressed by the FDP over many years, and socialist or social democratic visions of state control.

Instead, what appears to be emerging in Europe’s largest economy is a political commitment to a progressive supply-side economic and ecological project. There are, of course, others who claim similar political territory – for instance some of the voices in the US Democratic Party around Bernie Sanders and within the Biden administration.

The spanner in the works of this project is held to be the FDP and its leader, Christian Lindner. Lindner is likely to become the new German minister of finance and therefore in a position to veto any large-scale and ambitious investment project by the coalition. However, the German budget already includes a large fund set aside from an unused borrowing requirement for 2021 (largely intended to cushion the effects of the Covid pandemic) that provides the coalition government with sufficient funding to invest without having to resort to increased taxes or large-scale borrowing over the next four years.

What is perhaps most important about this coalition is that it appears to be committed to a politics that breaks with the politics of the left versus the right so prevalent in 20th-century party politics. The Greens emerged in the 1970s under the slogan “We are neither left nor right – we are ahead”. And ahead of the curve they certainly were as none of the issues of global warming should be news to German voters since the Greens raised all of them from the 1970s onwards.

The Green Party has gone from being a party of protest against capitalism and its propensity to destroy the environment, to a mainstream political party that attracts large portions of Germany’s young vote as well as thoroughly middle-class, conservative voters who worry about the climate crisis and the impact of pollutants on their and their families’ lives and health.

Similarly, the SPD has undergone a fundamental shift in the composition of its support base. The SPD was the classic working class-based, union-oriented political party along with Britain’s Labour Party and the various social democratic or socialist parties across Western Europe.

The inescapable fact is that the old-style working class, concentrated in grimy industrial cities and working-class neighborhoods, has shrunk and, in some cases, virtually disappeared. Contemporary SPD voters might still be “workers” but they work in global companies like Audi, BMW, Mercedes or VW; they earn very comfortable salaries at global firms like Adidas or Bayer and enjoy generous benefits and pension plans; and their unions may no longer be closely associated with the SPD as a political voice of the working class. The SPD has lost its traditional electoral footing and, as a matter of survival,  had to adapt to these new conditions by modernising its policy stances.

Similar socioeconomic and political changes have undermined the former connectivity between the churches and the conservative parties. The bloc of voters who gave their support to the Christian Democratic Union (CDU) and its even more conservative Christian Social Union (CSU) in Bavaria has also splintered.

In fact, the Green Party has been able to woo a good portion of this quite heterogeneous voting bloc. Green Party mayors now govern cities like Stuttgart, which in much of the post-war period were run by conservative/CDU politicians. The electoral disaster of 2021 that befell the CDU/CSU will surely lead these parties to seriously reconsider their own policy platforms, particularly in view of the electoral challenge they face from the Greens and the right-wing Alternative fuer Deutschland (AfD).

The tensions between socially and economically liberal and conservative voters, ecological considerations, and nationalist politics (especially on the issue of migration) are shredding these formerly cohesive parties.

The FDP lacked a solid electoral constituency throughout much of the post-war period. While it stood for a distinct form of German liberal thought, its ideological commitments never found a strong electoral foundation. It was often a protest default vote to balance out the two political camps on the left and right. This electoral strategy may no longer be successful in a situation of greater flux and voter movement from one party to another and forces the FDP to present not only a coherent alternative to the other political parties, but an attractive mix of policies, particularly for younger voters.

Cynical observers noted that one of the main reasons many younger voters gave the FDP their vote was because the party opposed speed limits on the Autobahn. However, precisely that will be a policy that this government will have to look at seriously and it is very likely that a carbon-free Germany requires speed limits on its freeways.

The fundamental changes in the German economy and society have shifted the political terrain upon which the political parties operate. The emergence of Alternative fuer Deutschland – which has been very good at recruiting disillusioned and disengaged, often highly marginalised voters in precarious economic conditions, particularly in the former East Germany – has been offset by the emergence of a voting bloc for a progressive ecological and socioeconomic project.

What we are bearing witness to in contemporary German politics is the emergence of this new vision that may well undermine the left/right division of the 20th century. This will have far-reaching consequences for not only European politics but for global politics and will provide space for international alliances that support progressive socioeconomic strategies and ecologically sensitive goals. DM