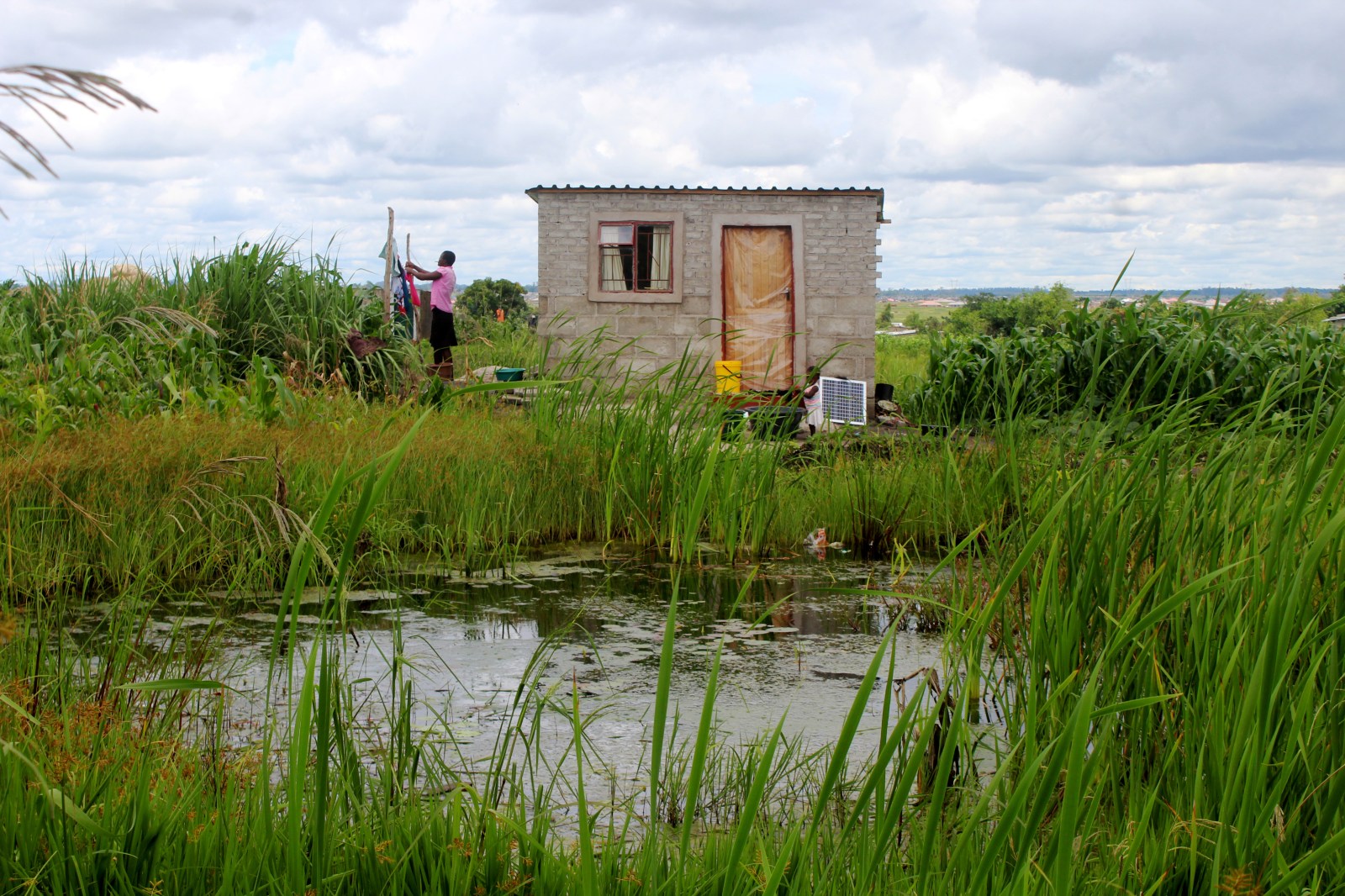 A temporary shelter built on wetlands in Epworth, a high-density suburb in Harare. (Photo: Lemuel Chekai)

In recent years, the Harare municipality has taken a tougher stance on ‘illegal structures’ on the city’s wetlands. It accuses bogus land developers of grabbing the land and has been demolishing people’s homes. But in whose interests is this being done?

The twisted steel of doors and window frames protruding from piles of rubble are all that remain of about 100 homes after the wrecking crew paid a visit to the area.

Chiwoniso Shoko, whose house in the high-density Harare suburb of Budiriro was among those razed, remembers that rainy summer morning well.

“There was hardly any notice. We were still asleep… it was the noise and rumble of approaching bulldozers that woke us up,” she said.

A widowed mother of three boys, Shoko had been in the process of building the house. Two of its seven rooms were done. The family was occupying these rooms while the others were being built. Some had already reached window height.

The demolitions began at 9am on 8 December 2020, and were over by 3pm, executed on the orders of the Harare City Council.

Illegal building has decimated wetlands in the Zimbabwean capital.

According to the Harare Wetlands Trust, a non-governmental organisation called Budiriro, about 22km from the city centre, had lost 49% of its wetlands, around 237ha, between 2008 and 2019. Harare as a whole lost 50% –  or 784ha – over the same period.

The consequences were serious.

City water infrastructure, initially designed to serve 300,000 people, was buckling under the strain of a population that had swelled to more than two million. And with climate change thought to be affecting rainfall patterns, wetlands had become increasingly important to the wellbeing of residents.

In recent years, the council has taken a tougher line on “illegal structures” that have mushroomed on the city’s wetlands. It accused “bogus land developers” of grabbing and parcelling out land in open spaces, including wetlands, that had been preserved in a natural state for ecological or national value.

But the city’s handling of the problem has drawn sharp criticism.

Officials sent the bulldozers to Budiriro at the peak of the rainy season, leaving Shoko and her boys, aged six, 10 and 14, out in the open. They scrambled to put up a makeshift, zinc shelter that now stands on the ruins of their former home.

The crude structure was all that remains of $11,500 Shoko poured into the project, the equivalent of six years’ salary for an average government employee in Zimbabwe. Some $7,000 of this – part of a benefit payout from her late husband’s employer – went on acquiring the land, a 300 square metre residential stand, in 2016. The balance, which she earned as a small-time cross-border trader, paid for the building work.

Shoko’s neighbours suffered similar heartbreak and most now live in shacks or temporary shelters amid the rubble too.

The widow said she had been a little skeptical when she acquired her plot, but that a representative for the developers, Masimba Cooperative, reassured her all was well, pointing to other settlements in the city built on wetlands.

Numerous efforts to get a comment from the cooperative owner, Regynald Masimba, proved fruitless. In the past, he has declined to discuss the matter with the media.

Shoko said she had been unaware of the importance of wetlands at the time and accused the council of double standards.

She pointed out that 10 minutes’ drive from her ruined home stands a flourishing settlement built on top of a wetland in Belvedere, a middle-class residential area.

“Since the incident occurred, I have always been wondering to myself, are wetlands only found down here in the high-density suburbs,” said Shoko while walking through a rubble-strewn field.

The Harare Wetlands Trust confirmed that Belvedere has lost 36% of its wetland area from 2010 to 2019, yet not a single eviction notice has been served in almost 10 years.

Selestino Chari, the trust’s programmes manager, was adamant that building on wetlands was a violation of the law, but questioned what he views as the arbitrary and high-handed way the council enforced its laws.

“[It] feels it has the jurisdiction to save or destroy the ecosystem. Occupied wetland spaces in the (relatively affluent) low-density suburbs were parcelled out by the city council so they can’t drag themselves to court in order to reclaim the spaces.

“But in the high-density suburbs, land barons are widely responsible for wetland occupation, and in cases like these, the council is never slow in taking matters to court for demolition orders.”

However, Harare mayor Jacob Mafume, who is currently suspended amid political wrangling at City Hall – but was in charge when the demolitions were carried out – insisted there had been no favouritism.

“We never favoured anyone. The list may have only involved those areas because Harare has more high-density settlements than low,” Mafume said.

The Harare city council was approached for comment but had not responded at the time of publication.

Chari said that in the past decade at least 15 wetland sites had been given over to housing in Harare’s low-density suburbs and satellite towns, and the local councils had failed to act against this. He said this reinforced a view that the demolitions were the result of council frustrations that it was not benefiting from the sale of the land, rather than from any will to save the wetlands.

“It takes a neutral party, like our organisation, or a complaint by residents, for an issue of wetland occupation in low-density suburbs to be discussed.”

The Harare Wetlands Trust said it had more than 25 cases in court against the council and housing cooperatives on the legality of certain settlements, and three-quarters of these involved houses in Harare’s low-density suburbs. However, the cases have dragged on since 2014.

Gift Kurupati, secretary-general of the Chitungwiza Progressive Residents’ Association, a not-for-profit organisation that represents ratepayers and tenants in Chitungwiza, a dormitory town 25km south of Harare, is critical of the role played by the national authorities.

“What worries us as residents is that regulatory authorities like the Environment Management Agency always talk about wetlands that are occupied by the poor. If it pertains to (affluent) areas like Longcheng [shopping centre] in Belvedere, Nyaradzo Funeral Services in Chitungwiza and the Old Mutual shopping mall in Chitungwiza, nothing is said.”

Kurupati said they and other individuals and organisations, including the Combined Harare Residents’ Association (CHRA), had tried to stop development on wetlands in Belvedere, but to no avail.

Mfundo Mlilo, a former director of the CHRA, said: “We tried to dispute the continued development of the area through court applications and letters to various responsible offices, but a paper came from the government describing it as a project of national importance.”

While the rich were seemingly at liberty to break environmental laws, including the Environmental Management Act and gazetted notices, the effects of wetland occupation were hurting the poor.

A walk through any of the more upmarket low-density neighbourhoods reveals that almost every household has sunk a borehole of its own. But private boreholes are a luxury that few in Harare’s high-density suburbs can afford.

At any time of day, women and children can be seen queuing at the communal borehole points serving a radius of a kilometre or two,  as the council’s water infrastructure fails to keep pace with an ever-swelling population.

President Emmerson Mnangagwa said in February that he had established a team to identify and develop areas to relocate families whose homes were built in wetlands and other undesignated zones. But 10 months on, nothing has materialised.

Shoko would like to take the president at his word but she has her doubts. “So, for now, while we wish for this to materialise, we are not expecting too much,” she said.

In January this year, the Harare City Council announced that more than 30,000 illegal structures, mostly homes in high-density suburbs, were set to be demolished. This was in addition to about 11,000 homes in Chitungwiza earmarked for bulldozing, as officials pursued a programme to turn the capital into a “world-class city” by 2025.

The programme, which was launched in 2012, counts among its goals the creation of well-oiled, co-ordinated and functional infrastructure with abundant opportunities for the city’s people.

In 2005, the government under Robert Mugabe launched Murambatsvina, a campaign to clear slums across the country. Estimates put the number of people it displaced at between 64,000 and 323,000, with the economic fallout affecting up to 2.5 million people.

Murambatsvina appears to have been politically fuelled, with critics of the government viewing it as a way of punishing the urban populace for voting for the opposition.

This time, the wetland demolitions appear to be motivated more by money. DM

Lemuel Chekai is a 26-year-old freelancer based in Harare and a participant in the Young African Journalists Accelerator Programme, which focuses on climate issues. This article forms part of the Roving Reporters biodiversity reporting project supported by the Internews Earth Journalism Network.