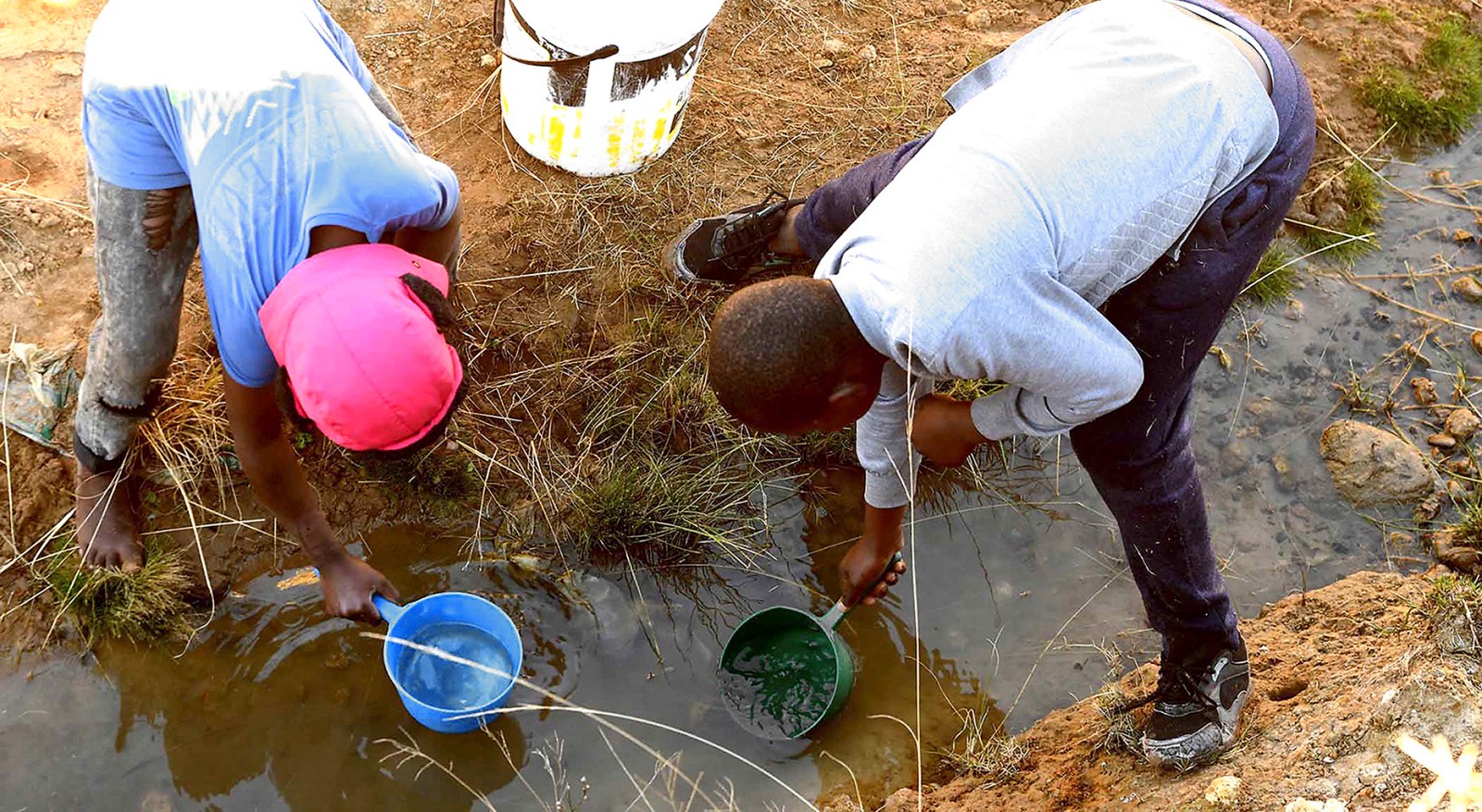 Due to a lack of adequate water infrastructure, many residents in rural communities in the Eastern Cape still depend on rivers and other open water sources for their water needs. (Photo: Black Star / Spotlight)

DA Member of the Eastern Cape Provincial Legislature Retief Odendaal has written to the United Nations Water Chairperson Gilbert Houngbo asking for an intervention after the government in the drought-stricken province has failed to support municipalities and farmers.

In his letter to Houngbo dated 6 December 2021, Odendaal said he wanted to lobby the UN to provide assistance and expertise to the South African government, but more specifically the Eastern Cape provincial government, to help with the water crisis due to the crippling ongoing drought.

While dam levels in the province were at 52.4% full, compared with 50.8% last week, with 26 dams sitting at above 50%, Odendaal said millions of residents were facing possibly the worst humanitarian crisis to affect the province as the government did nothing.

Daily Maverick reported last month that for more than 10 years some parts of the Eastern Cape had faced a series of multi-year droughts that had dropped dam levels to below 50%, made worse by the climate crisis and the long-term effects of El Niño.

Speaking to Daily Maverick on Tuesday, Odendaal said the Eastern Cape government had shown that it lacked the political will and expertise to adequately deal with the crisis:

“Smaller municipalities are already dealing with water shedding, some for weeks if not months at a time, while farmers have been left to fend for themselves as their crops and livestock are decimated. While humanitarian aid organisations deliver water to residents, describing the situation as the worst they have seen, the provincial and national government have been noticeably absent”.

He said the drought conditions that had been affecting the province, exacerbated by rising temperatures and climate change, had been aggravated by a water management crisis of epic proportions.

“While some farmers received good rainfall in recent weeks, it has not been enough to break the drought. These farmers have been battling for years without government support, despite hundreds of millions of rands going unspent across departments,” Odendaal said.

“Through classification, municipalities and sector departments are allowed to reallocate funds from existing grants to address drought. We are to receive a report from the National Joint Drought Coordinating Committee meeting on submitted business plans by municipalities and the Department of Rural Development and Agrarian Reform (DRDAR) in request for funding from the Municipal Disaster Relief Grant and Provincial Disaster Relief Grant,” Ngam said.

Odendaal said in Nelson Mandela Bay, critical drought mitigation measures had been left to lapse and the money provided forfeited to the national government because the ANC-led coalition had done nothing.

“Arguably the most vital water infrastructure upgrade in the province, the third phase of the Nooitgedacht low-level water scheme in Nelson Mandela Bay, ground to a halt because the government-appointed Amatola Water Board failed to pay the contractor. This critical upgrade was supposed to provide an extra 40 million litres of water a day to desperate residents,” Odendaal said.

He said while much-needed rains have fallen over recent weeks, these have made very little impact on dam levels, and forecasts are that these could be the last significant rainfalls until March or April of next year.

On the appeal to the UN, Odendaal said, “We wrote to bring the plight of the people of the Eastern Cape to their attention and to lobby them to reach out to the provincial government and offer much-needed expertise. Maybe, with the eyes of the world on them, the ANC will eventually take action and serve the people of the province,” he said.

Odendaal told Houngbo that the western parts of the Eastern Cape had been grappling with prolonged drought conditions over the past six years.

“These conditions have resulted in severe water shortages in parts of the province, which have decimated farming communities and led to frequent water outages in certain municipalities,” he said.

Odendaal said the provincial government had neglected to respond timeously to the increasing threat of the climate crisis.

“The lack of response has resulted in the province being unprepared for the extended drought conditions that the southwest and northwest parts of the province have been grappling with over the past six years.”

He said the provincial government had declared a state of disaster as a result of the drought in October 2019, but allowed the drought declaration to lapse in January 2020.

“Since then, no provincial state of disaster has been declared, leading to a critical shortage of funding to assist drought-plagued farmers or fund drought mitigation and/or augmentation infrastructure projects in urban areas,” he said.

“Many of these farmers have depleted their savings and are facing financial ruin because they have been feeding their livestock for extended periods of time. In 2019 after the provincial state of disaster was declared, DRDAR allocated a meagre R74-million in drought relief to farmers. At that stage, it was estimated that at least R1-billion was necessary to assist farmers meaningfully with feed and fodder. No further funding has been allocated in drought relief to farmers since,” Odendaal said.

He said boreholes dried up or have started yielding poor quality water.

“These farmers’ pleas for assistance with the drilling of boreholes have fallen on deaf ears. The extended drought has had a severe impact on agriculture practices in certain areas in the province and has, insofar as subsistence farmers are concerned, certainly compromised food security,” he said.

“Although some drought mitigation and/or drought augmentation programmes were implemented in these communities by the government, many of these projects were marred with delays in construction and implementation. This, in my opinion, is a direct consequence of the unavailability of expertise in government to provide advice and/or oversight in respect of these projects,” he said.