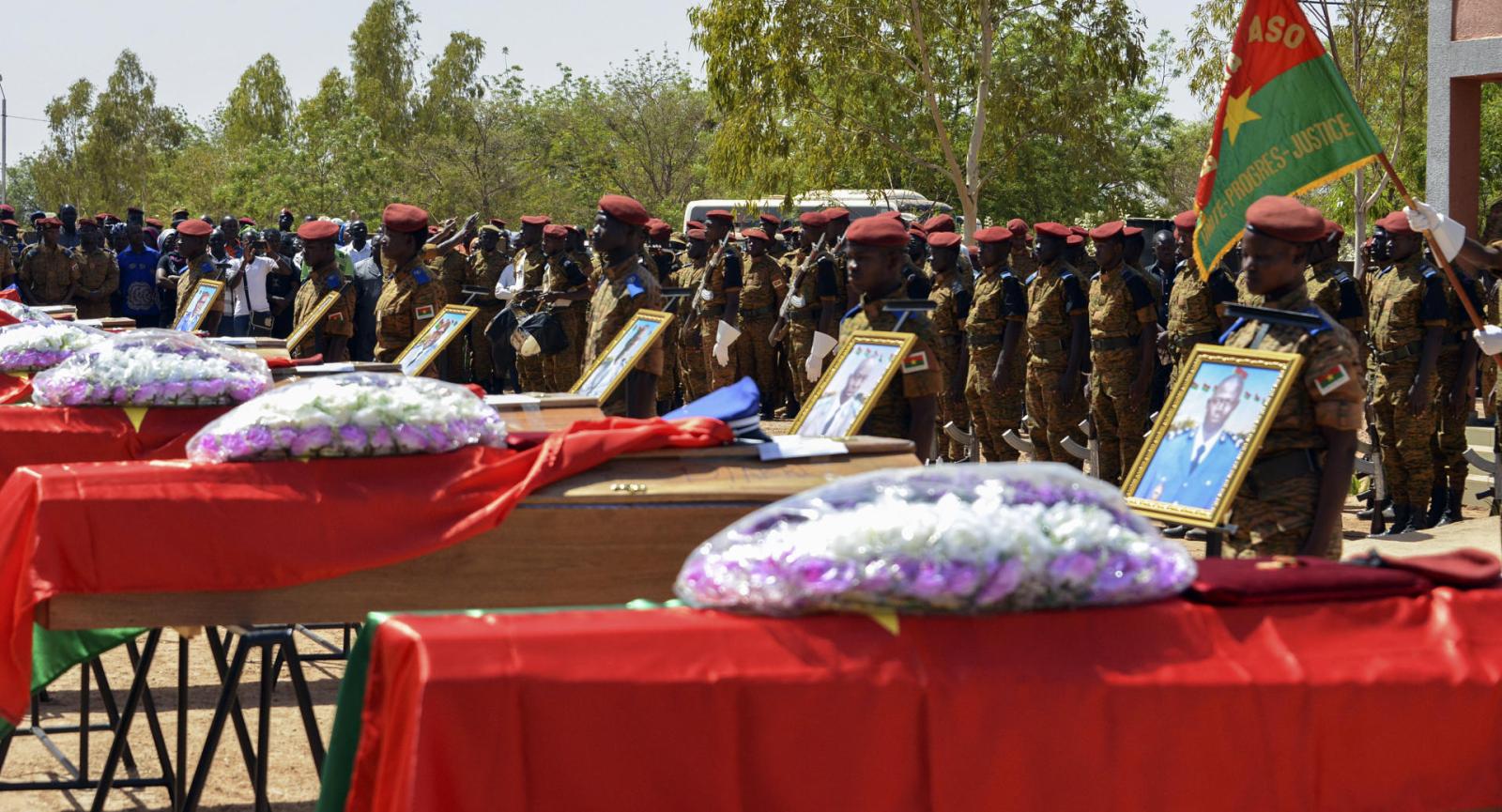 Burkina Faso military personnel gather behind the coffins of military victims of the suspected terror attack during a funeral in the capital Ouagadougou, Burkina Faso, 07 March 2018. (Photo: EPA-EFE/STR)

With violence at a peak, the country needs to coordinate its structures and adopt a new vision to ensure the safety of its citizens.

After years of delays in reforming Burkina Faso’s security sector, the government adopted a national security policy on 6 October this year. As social anger mounts over the inability of the authorities to contain an increasingly deadly jihadist insurgency, the country needs to urgently reform its security apparatus to contain the worrying insecurity.

The overthrow of Blaise Compaoré in 2014 in Burkina Faso, triggered by his attempt to amend the constitution for a third term, and the political transition that followed, led to significant dissension within the Burkinabe security system.

The desire of some members of the Presidential Security Regiment (RSP) to interfere in that transition process led to disagreements with the rest of the army and the transition’s political authorities. Security sector reform was meant to respond to citizens’ call for a definitive break with the old order and military interference in the country’s political governance. This demand was reinforced by the failure of an attempted military coup in September 2015 and a rise in terror attacks from January 2016.

In September 2015, a call for reform of the armed forces led to the dissolution of the RSP, the backbone of Compaoré’s protection apparatus. A national intelligence agency and an army reform commission were created in October and December 2015.

Finally, in October 2017, the National Forum on Security conceptualised and advocated for security sector reform. This reform should break with the dominant military-police paradigm and lay the foundation for a holistic approach to public security policy.

Conducted in the spirit of broad consultation, these meetings have defined the main guidelines and organised the implementation process of the reform. The forum recommended the elaboration of a national security policy to which a national security strategy and various sectoral policies in this field should be linked.

However, the commission in charge of drafting the national security policy was only created a year later, in December 2018. It submitted the final version of the document to the president in January 2020 and was adopted in October 2021, four years after the forum.

These delays reveal the contextual challenges facing security sector reform in Burkina Faso. First, mistrust prevailed between the new civilian elites and the military. This dates back to 2014 when the transitional leaders tried to sideline an institution known in the past for its political interference.

It was motivated by the fear of the takeover of key components of the security apparatus by elements of the former regime. The current government has openly adopted the same logic of distancing the defence and security forces from political dynamics.

This approach has not fostered the full cooperation of military elites in the security sector reform process. Some of them, still in favour of security policy governance under military leadership, aren’t open to the idea of civilians controlling the security sector’s governance. This partly explains the tug-of-war over the steering of the reform between the defence and security ministries, against a backdrop of rivalries between the army and police.

The deterioration of the security environment since 2015 has also disrupted the process of security sector reform. The authorities’ response to escalating jihadist violence focuses on emergency sectoral solutions rather than holistic and coherent actions.

Specialised judicial poles for the repression of terrorism and organised crime offences were established in January 2017. A military programming law to fund the implementation of the reform of the armed forces was passed in December 2017. And a National Centre for Security Studies was created in October 2019 to meet the state’s need for knowledge and expertise on issues of national interest.

In January 2020 a law introducing volunteers for homeland defence was passed, a mechanism through which ordinary citizens can participate in the armed response to insecurity under relative state control. However many observers expressed reservations about this system, saying it could exacerbate inter-communal violence and encourage abuses. Efforts to implement Burkina Faso’s long-planned community policing system continued, and the country adopted a national strategy to prevent radicalisation and violent extremism in May 2021.

These fragmented actions have allowed for immediate needs to be met, but without a broad and coherent vision, they haven’t produced the effective transformation expected of the security sector as a whole.

The 2021 national security policy could breathe new life into the overall reform process. The appointment of a military officer in June to head the defence ministry suggests a softening of relations between the political and military elites. More holistic coordination and implementation of the security policy is needed though, especially with violence intensifying in the country.

Burkina Faso’s security sector reform requires both the will of the political authorities and that of the defence and security forces to accept change. DM

This article was published with the support of the Ministry of Foreign Affairs of the Netherlands.