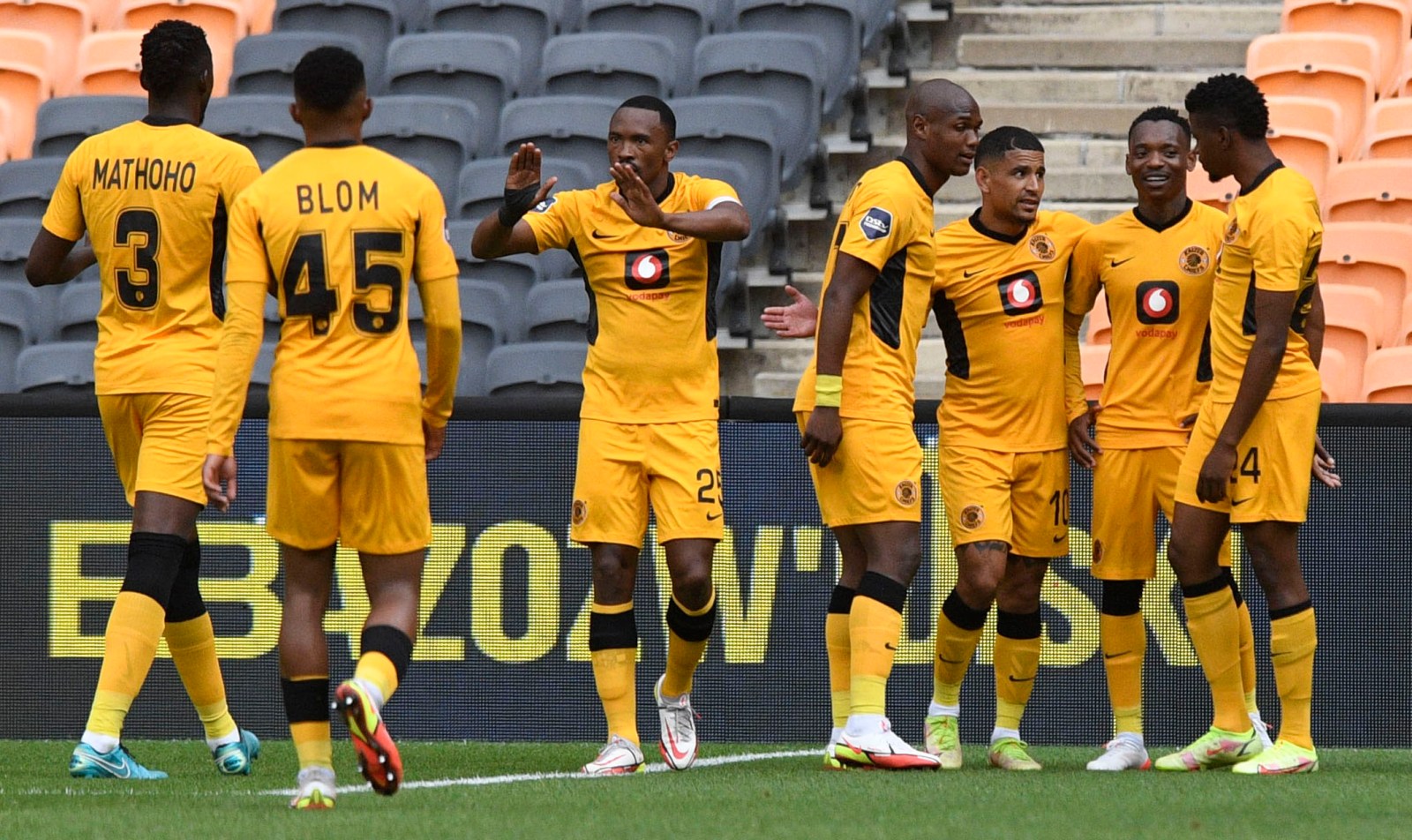 Keagan Dolly of Kaizer Chiefs celebrates a goal during the DStv Premiership match between Kaizer Chiefs and Orlando Pirates at FNB Stadium on November 6, 2021 in Johannesburg. Kaizer Chiefs have written to the PSL requesting the postponement of five matches, including Cape Town City, owing to a Covid-19 outbreak in the Amakhosi camp. (Photo by Sydney Mahlangu/BackpagePix/Gallo Images)

Amakhosi’s unplayed match against Cape Town City overshadowed the DStv Premiership action this weekend, with the Premier Soccer League yet to comment on the ongoing matter which will affect more games in the near future.

There were five DStv Premiership matches over the past weekend, with three ending in stalemates and two ending with winners.

Defending champions Mamelodi Sundowns dropped points after playing to a 1-1 draw against Stellenbosch. AmaZulu and Royal AM also shared the spoils after a goalless draw, as did Swallows and Maritzburg United following a 1-1 draw.

There were victories for Sekhukhune United and Golden Arrows as they beat SuperSport United and Chippa United respectively.

However, all eyes fell on the one match that eventually wasn’t played — Kaizer Chiefs versus Cape Town City.

On Friday 3 December, Chiefs released a statement indicating that they had written to the Premier Soccer League (PSL) to ask for a postponement of their game against City, as well as four other games following that match. This includes clashes against Golden Arrows (8 December), Sekhukhune (12 December), Royal AM (19 December) and Maritzburg (22 December).

Amakhosi said they had deemed it necessary to do this as 31 of their personnel at the Kaizer Chiefs Village in Naturena had tested positive for Covid-19 in the lead-up to the game.

This led to Amakhosi failing to honour their fixture against City, which was scheduled to take place at the FNB Stadium on Saturday evening.

“Unfortunately, this is the only option available in the current situation and, as a responsible corporate citizen, Kaizer Chiefs upholds its duty to protect the lives of those around us — including others — and do our best to avoid an outbreak that might potentially affect the league and the country,” said the Soweto giants in a statement.

The Citizens arrived for the match only to find the gates locked at the stadium, indicating that they had not received any communication alluding to the postponement of the match from the PSL’s hierarchy.

“Having followed all matchday procedures, Cape Town City was present at FNB Stadium for the start of the match at 18:00. Regrettably Chiefs did not arrive and the match officials called the game off at 18:15 in accordance with the rules of the game. A sad day for football,” said the club.

As it stands, Amakhosi are yet to receive any communication from the league, despite writing two letters.

“The latest and what’s on my desk is on Chiefs’ website, if there’s anything new update it will also be issued,” Amakhosi’s communications manager, Vina Maphosa said to Daily Maverick when asked if they had since received any feedback from the league.

A rock and a hard place

According to the league’s handbook, postponements are permitted under these conditions:

A team being depleted as a consequence of a global pandemic would normally constitute “extraordinary circumstances”. However, after being granted the green light to resume activities in a bio-bubble, and with a tight schedule to finish the 2020/2021 season, the PSL’s executive committee resolved that Covid-19-related postponements would not be considered.

“The executive committee resolved on 3 August 2020, and directed, that Covid-19 reasons do not and will not constitute exceptional reasons justifying a postponement,” reads the circular that teams received.

True to their word, last season the PSL’s disciplinary committee punished two GladAfrica Championship teams who had failed to follow the rules as a direct result of Covid-19.

Polokwane City could not field five under-23 players, as is prescribed by the PSL, for their match against eventual Championship winners Sekhukhune. They were docked three points as a result.

Another second-tier side, Cape Umoya United, found themselves in a similar situation to Amakhosi, with Covid-19 breaking out in their camp.

They pleaded with the league’s hierarchy for a postponement of their match against Cape Town Spurs. Their pleas were shot down. They failed to honour the fixture and were retrospectively punished by the disciplinary committee, with Spurs handed all three points.

With such a precedent already set, it will be hypocritical of the PSL to now rule in favour of postponing Amakhosi’s games, and it may open a can of worms that the league will struggle to contain in future.

To compound the troubles of the league, the PSL’s prosecutor in disciplinary matters Nande Becker vacated the hot seat and the organisation is on the hunt for a new prosecutor.

Becker clarified that his departure was not connected to the ongoing Chiefs saga.

“I resigned on 30 November 2021, for personal reasons,” Becker told Daily Maverick without going into further detail.

Chiefs are scheduled to play Golden Arrows on Wednesday, 8 December. The team is unlikely to honour that fixture either. DM