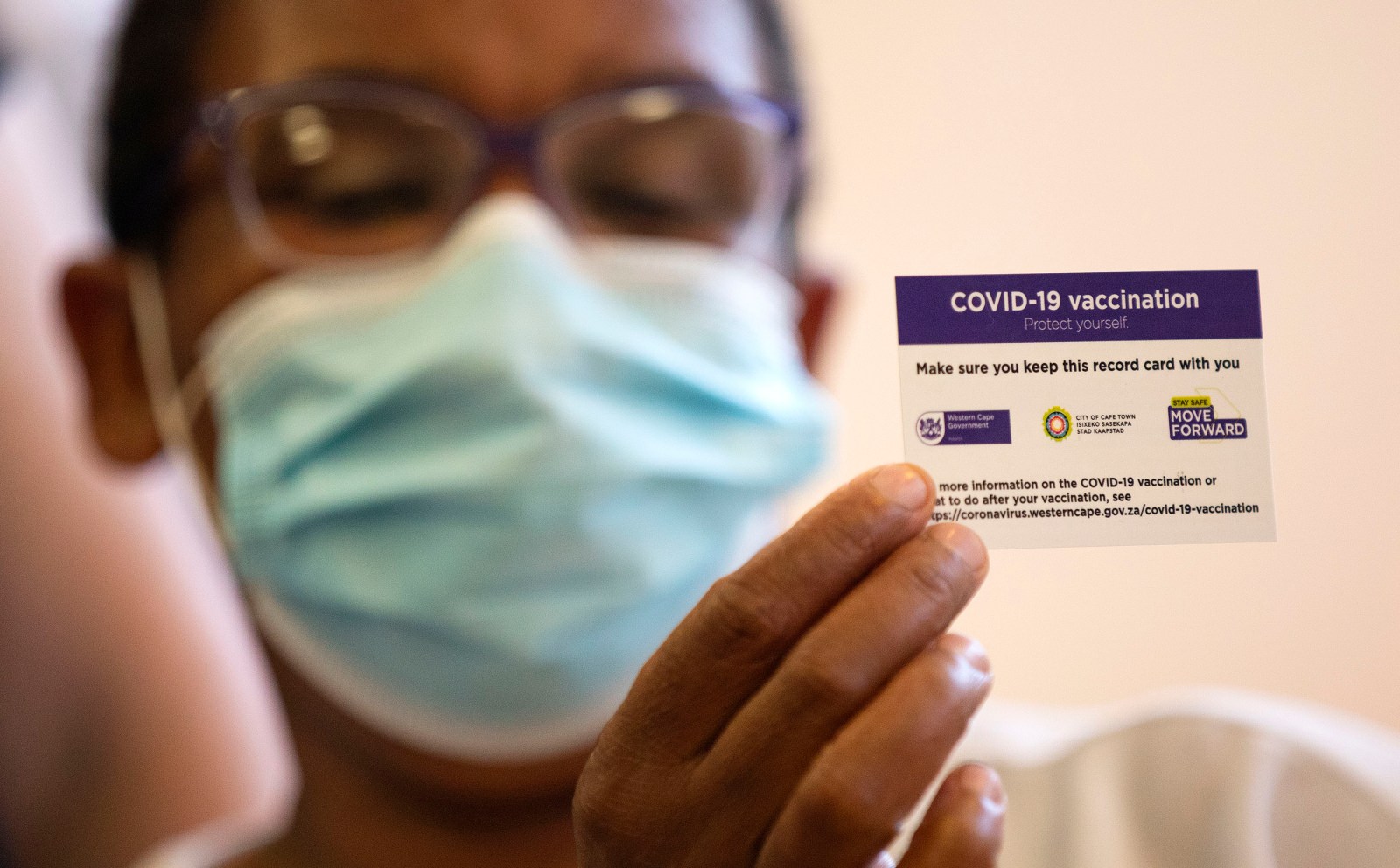 A South African health worker holds up her vaccination card after receiving the Johnson & Johnson Covid-19 vaccine during the roll-out of the first batch of vaccines at Khayelitsha Hospital in Cape Town, South Africa, on 17 February 2021. (Photo: EPA-EFE / NIC BOTHMA)

The Department of Health has indicated there may be a roll-out of booster shots this year — if it receives approval from the South African Health Products Regulatory Authority.

The National Department of Health has indicated that it could “possibly” start a rollout of Covid-19 booster shots to the public this year, if it gets approval from the South African Health Products Regulatory Authority (Sahpra) in time.

Spokesperson Foster Mohale said on Monday the department could start the booster roll-out this year if approval comes through. He had previously said it would not happen before the conclusion of the Sisonke roll-out of boosters for health workers on 15 December.

People with compromised immune systems are already able to access booster shots on prescription from their doctor.

The Omicron variant, identified in November by South African scientists, has so far been detected in five provinces, according to Sinehlanhla Jimoh of the National Institute for Communicable Diseases. These are Gauteng, the Western Cape, the Eastern Cape, Mpumalanga and KwaZulu-Natal.

According to a statement from Sahphra, Pfizer applied for approval for its booster jab on 17 November 2021. The application is for the use of a third shot for those who have already received two doses of the Pfizer vaccine and is not for people who have received the Johnson & Johnson jab.

Efficacy data released by Sisonke researchers showed that the vaccine was excellent at preventing death and severe disease (83%), admission to the ICU (76%) and hospitalisation (67%), even in healthcare workers living with HIV during waves with circulating Beta and Delta variants. This was based on data collected in February and March 2021. More data will be made available later.

According to a statement from the Sisonke researchers, the most recent data from Johnson & Johnson on the vaccine’s durability beyond eight months shows some reduction in antibodies, particularly in the elderly.

There are presently 83,584 active cases of coronavirus infections in South Africa, with another 11,125 reported on Sunday. DM/MC