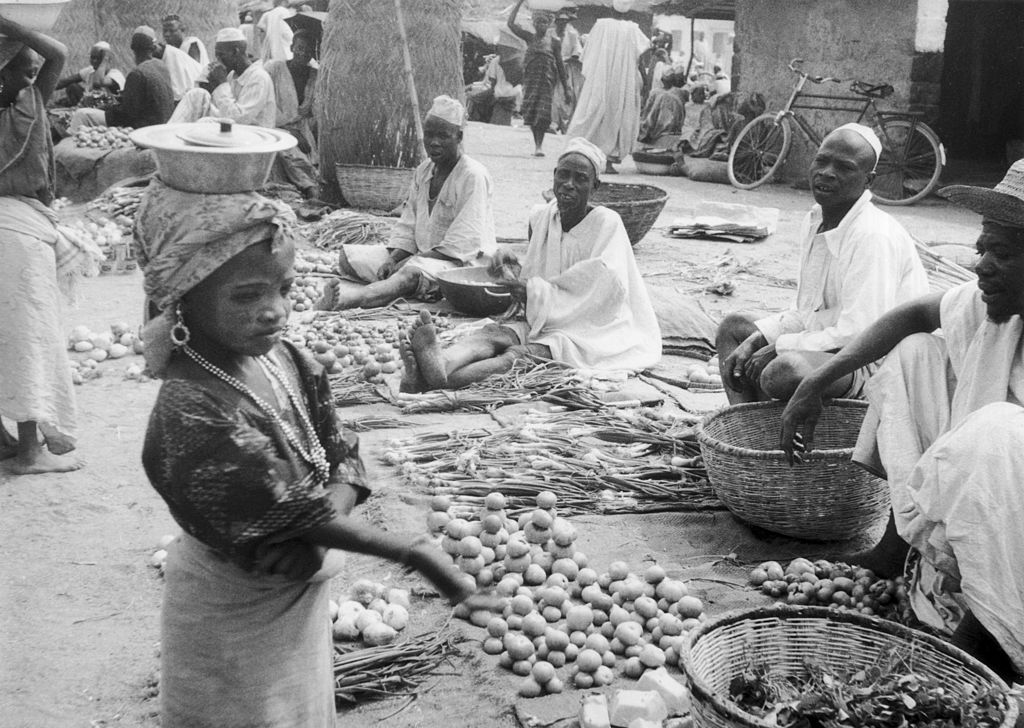 A Hausa girl, wearing traditional patterned robes and a head wrap, and carrying a basin on her head, shopping for food in a vegetable market in Bauchi, Nigeria, circa 1940. The child, who has traditional tribal markings on her face, is using the traditional gesture for some spinach from the traders, who have their wares spread out on fabric sheets on the ground. (Photo by W. T. Gray/Fox Photos/Getty Images)

Africa is humankind’s home continent. Homo sapiens, with the anatomical and cognitive capacity to have human language as we know it today, originated in Africa between 300,000 and 200,000 years ago.

Then, as an abundant fossil and archaeological record makes clear, some of our human ancestors left Africa. They spread to neighbouring continents, taking their languages with them. Others remained behind; their descendants speak what we call “African languages”, pointing to these communities’ long histories on the home continent.

There were also those who migrated out of Africa and whose descendants later returned. These include the ancestors of the so-called Ethiosemitic languages in Eritrea and Ethiopia, some 3,000 years ago. The most recent and dramatic returns came with Arabo-Islamic invasions beginning in 614 CE, European colonialism after 1492 CE, and the post-colonial work migrations of the 20th and 21st centuries.

One result of all this movement is the geographic spread and continuous development of human languages – most of them unwritten. It is difficult to study and reconstruct them: unlike with excavated finds in palaeoanthropology, human language does not leave fossils behind unless in writing. Very few living or extinct languages left behind written texts. Those that did include the Ancient Egyptian hieroglyphics dating back about 5,000 years, and languages ancestral to modern Semitic which left written records that also cover several millennia, the oldest from Akkadian in modern-day Iraq in cuneiform script.

For more than 50 years, I have devoted considerable research efforts to the study of the so-called Chadic languages. These are spoken west, south and east of Lake Chad (hence their name) in Central Africa. The widely known and best researched Chadic language is Hausa, spoken as one of Africa’s major languages across large parts of West and Central Africa by some 80 million people or more. Unfortunately, knowledge about Hausa’s approximately 200 language relatives in Nigeria, Cameroon, and Chad is coming in only very slowly.

What researchers most want to know is how these languages have developed as a family from a common ancient proto-language; they also want to unpack how languages relate to other and better-known language families – Ancient Egyptian, Berber (Amazigh), Cushitic, Semitic, and possibly Omotic – with whom they are assumed to form a common language phylum, Afroasiatic.

I used well-established linguistic techniques to reconstruct one of the ancestral languages likely spoken a few thousand years ago in the region around Lake Chad in Central Africa and that was ancestral to about 80 present-day languages in the area. Until now, these languages were practically unwritten.

Professional linguists use a number of established tools to unearth language histories even in the absence of written texts. Two of these are internal reconstruction and the comparative method. These were developed some 150 years ago by the Neogrammarian School in Leipzig, whose scholars successfully reconstructed the Indo-European language family relationships that link modern and ancient European languages like English and Ancient Greek to modern and ancient Asian languages like Urdu and Ancient Sanskrit.

My own research targets the linguistic history of the Afroasiatic language phylum. A phylum, in linguistics, is a group of languages related to each other less closely than those that make up a family. Together, the Afroasiatic phylum consists of approximately 400 languages. Most are spoken in the northern half of Africa from Morocco and Mauritania in the west to Egypt and Tanzania in the east and in adjacent parts of Asia. They rank among the oldest living languages in terms of traceable records. Experts have estimated that Proto-Afroasiatic emerged in Africa between 12,000 and 16,000 years ago.

My research focused on the almost 200 Chadic languages spoken west, south and east of Lake Chad in Nigeria, Cameroon and Chad. They form the largest family within the Afroasiatic phylum. There are four branches; the Central Chadic or “Biu-Mandara” consists of about 80 languages. The aim was to reconstruct the sound system and vocabulary of Proto-Central Chadic.

My main source was an online database containing 250-word meanings like “compound”, “cow”, “to eat”, “millet”, etc. with data from up to 66 living Central Chadic language varieties provided by linguist Richard Gravina, who undertook a pioneering effort to reconstruct Proto-Central Chadic in his 2014 PhD dissertation, though using a different methodological approach. Altogether I ended up analysing about 5,500 words from between four and 50 modern languages.

I meticulously analysed each word to delineate its historical development from Proto-Central Chadic to its present-day forms in modern languages, covering a time-depth of potentially thousands of years.

No language develops in a vacuum. Almost all the words I researched changed sounds over time. This would partly have been because of the language’s own rules and regularities in inter-generational language transfer. But sound changes are also influenced by locally occurring new speech habits adopted by following generations of speakers and forming new dialects, or by borrowing words and expressions from neighbouring languages.

Nonetheless, languages also retain features of linguistic heritage, like from the ultimate proto-language; in this case, Proto-Afroasiatic.

Proto-Central-Chadic only knew one true vowel, “a”. It used “y” and “w” to serve, at the same time, as vowels “i” and “u” when in syllable-nucleus position (the centre of the syllable). Take the modern Mandara word, ira for “head”. In Proto-Central-Chadic, it was *ghwna. I was able to deduce this by understanding vowel substitutions and word sound changes.

Consonants changed, too. The word for “sheep” was *tama in Proto-Central-Chadic; the m became w, and suffixes changed over time too, leading to the modern Mandara word for “sheep”, kyawe.

I hope this work will be a step towards unearthing some of the area’s currently unwritten history. By comparing sounds and words of modern languages, it is possible to detect population movements and migrations in the past, since people adopt sounds and words from other languages with whom they have been in contact over a certain period of time. Reconstructed vocabulary also sheds light on cultural items and people’s habitats, including the spread of ideas and the importance of certain concepts. DM/ML

Ekkehard Wolff is an Emeritus Professor of African Linguistics at the University of Leipzig.