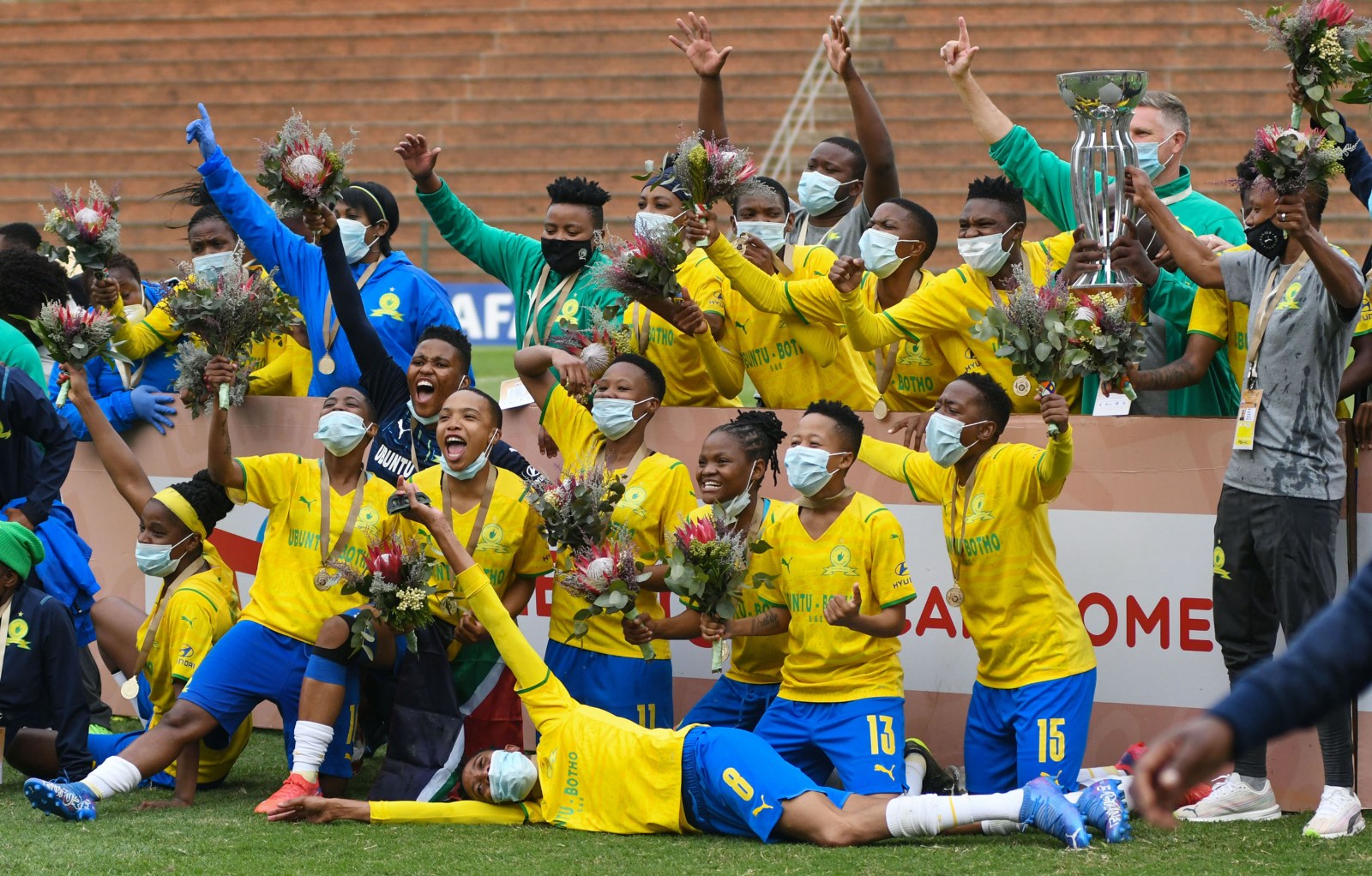 Head coach Jerry Tshabalala has helped turn 2021 into a historic year for the Mamelodi team.

Mamelodi Sundowns Ladies have swept away everything in their path this season.

They recently defended their Hollywoodbets Super League title in style, seeing off JVW 2-1 to clinch a consecutive league crown with two games to spare.

The win against JVW a week ago was the team’s 22nd from 24 matches in the domestic league. The only blemishes on their record came courtesy of a two-all draw against JVW in June, as well as a loss on a technicality after the team was found guilty of failing to follow Covid-19 protocols.

According to the disciplinary committee of the South African Football Association (Safa), the team failed to fumigate the dressing rooms three hours before their match against First Touch Academy on 12 June, a Covid protocol prerequisite for all matches. For that, they were docked three points.

In spite of those two setbacks, the gap between them and second-placed Tshwane University of Technology (TUT) is still a comfortable eight points, with two games in hand.

Despite facing fierce competition on the way to clinching the continental title, they came out on top. They finished the tournament with five clean sheets in five matches and without tasting defeat.

A 2-0 win over Ghana’s Hasaacas Ladies in the historic final on 19 November sealed their history-making mission in Egypt, where the two-week tournament was hosted.

Along with the Champions League and the domestic league crown, the Tshwane side also won the regional Cosafa regional crown. The team has, in 2021, secured an unprecedented treble in African women’s football.

Despite their unmatched dominance over the past two years, the man at the centre of all the team’s success, head coach Jerry Tshabalala, refuses to blow his own trumpet. He has been a key figure in the team’s fortunes and lack of complacency.

“I’ve been in women’s football for some time. But I’m one person who doesn’t like to take the glory and say: ‘This is what I’ve achieved now, I’m big now.’ It all goes back to how I achieved that. I didn’t achieve it alone,” Tshabalala said.

“If it wasn’t for the technical team and the management, we wouldn’t be where we are today. One thing is for sure – we’ll keep on working hard. If rewards are there, rewards will be there. You don’t have to look for rewards. Let your work speak volumes.”

Tshabalala hails from Tembisa township in Gauteng. He played for some of the local teams in the country’s lower leagues before moving into coaching.

The 40-year-old’s path to women’s football came after he was offered a coaching opportunity with Mpumalanga-based side Detroit Ladies, which has produced talents such as former Banyana Banyana midfielder Nompumelelo Nyandeni.

“I did not decide to switch to women’s football; it’s something that happened to me back in 2009. I was an assistant coach for a men’s team and got offered a head coach position for a women’s team – that’s how it started. I have passion for football. I don’t discriminate between women’s and men’s football. It’s the same for me,” Tshabalala said.

According to long-time adversary of the Sundowns Ladies’ coach Edwin Lisene, who previously coached Bloemfontein Celtic Ladies and faced Tshabalala numerous times in the semiprofessional Sasol League, the Sundowns coach is a football-crazy individual.

“I’ve known coach Tshabalala since 2009. I met him in Limpopo during Sasol League national playoffs when he was coaching Detroit Ladies.

The sky’s the limit

In 2012, the coach was granted the opportunity to further his career after he was handpicked by Sundowns’ players as the person they wished to lead them forward after the death of their then coach, Brian Dube.

Tshabalala has not looked back since being handed that baton and says he has even grander ambitions for if or when his chapter with Sundowns Ladies comes to an end.

Speaking before his side’s Champions League triumph, Tshabalala said he wanted to improve himself further, with an eye to taking over one of the female national teams in Africa or beyond in future.

“I want to invest more in myself. I have not invested enough in myself, and I have to put more work into that.

“I want to be coaching one of the women’s national teams in three or four years. But not right now, as I do not think I’m ready for this yet. I have to work on myself first,” the coach said.

At Sundowns, Tshabalala has built a team that works like clockwork, even when changes are made or players come in from the bench.

Tshabalala showed during a recent Champions League match that he is a coach who trusts all his troops when he benched some key players because he was not happy with their performances.

One of those was experienced forward Andisiwe Mgcoyi, who would come off the bench to net one of Sundowns’ two goals in the final.

According to the team’s captain, Zanele Nhlapho, these decisions keep everyone on their toes and don’t disrupt team harmony because the players trust Tshabalala and his technical team, as well as each other.

“It doesn’t matter who is playing or not playing. Whoever is chosen does the job. Even when the coaches change things up and bring in new players, you cannot see who has been subbed off and who has replaced them. At Sundowns, it’s like that; we work for each other,” Nhlapho told DM168.

Having tested themselves against some of the best players on the continent this year and come out on top, there might be room for complacency to creep in for the Sundowns team. But, with the humble and hardworking Tshabalala at the helm, it is unlikely to be a permanent resident in a team that looks likely to dominate the field for some years to come. DM168