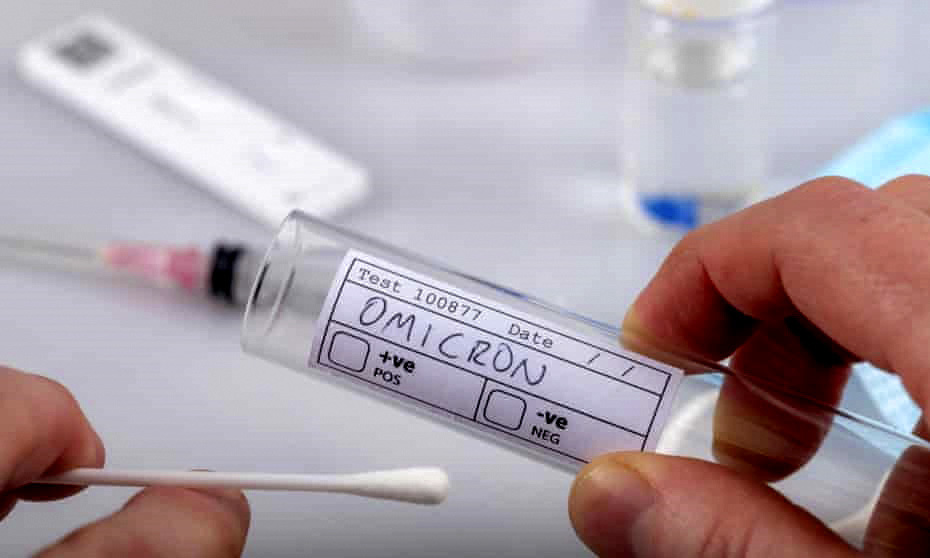 While researchers are warning that it might be too early to tell,  doctors are seeing a significantly different clinical profile in their patients admitted for Covid in Tshwane hospitals – giving preliminary and early indications of less Covid pneumonia and less severe disease. Tshwane is significant as it is the epicentre of the current outbreak of infections as severe diseases are most often seen after a few weeks.

On Friday researchers at the National Institute for Communicable Diseases confirmed that they too were seeing a slightly different picture, but added that this could be the result of vaccination rather than a characteristic of the Omicron variant that is now dominant in Gauteng.

The picture, Dr Fareed Abdullah points out, is “unusual” and shows a marked difference from what they saw in the first three waves. Abdullah is the director of the Office of AIDS and TB Research at the SAMRC and a part-time HIV Clinician at the Steve Biko Academic Hospital, where he has worked as part of the Covid clinical team in the first three waves of the epidemic.

The National Institute for Communicable Diseases (NICD) released the latest available figures of confirmed coronavirus infections on Saturday night. These were 16,366 new cases, confirming Prof Salim Abdool Karim’s prediction that the country will top 10,000 new cases a day by the end of the week.

Of these new cases 11,607 are in Gauteng. The next highest numbers are found in the Western Cape (1,017) and KwaZulu-Natal (1,002). The country currently has a 23.8% positivity rate meaning more than 1 in 5 tests are positive. Between Friday and Saturday 65,990 people were tested.

Abdullah shared his observations on the impact of Omicron in Tshwane over the weekend.

Tshwane has borne the brunt of the current outbreak of coronavirus infections driven by the Omicron variant, with close to 10,000 cases (9,929) reported in the district in the last five days from 29 November to 3 December 2021.

“It is essential to recognise that the patient information presented here only represents the first two weeks of the Omicron wave in Tshwane. The clinical profile of admitted patients could change significantly over the next two weeks, by which time we can draw conclusions about the severity of disease with greater precision,” he explained.

Yet, he added they were seeing an unusual clinical picture that is significantly different from their observations in the first three waves of infections.

This includes that 76% of patients were incidental Covid admissions.

“This very unusual picture is also occurring at other hospitals in Gauteng. On 3 December Helen Joseph Hospital had 37 patients in the Covid wards, of whom 31 were on room air (83%); and the Dr George Mukhari Academic Hospital had 80 patients, of which 14 were on supplemental oxygen and one on a ventilator,” Abdullah said.

At this stage, while there is an alarming increase in cases, there does not appear to be a similar exponential increase in admissions for Covid pneumonia, their research found, based on the high proportion of patients not requiring supplemental oxygen.

Abdullah said that their research was done at the Steve Biko/Tshwane District Hospital Complex in Pretoria but the tests are done on a PCR machine that does not screen for the S-gene which would indicate the presence of Omicron. The National Institute for Communicable Diseases have however indicated last week that Omicron is now the dominant variant in the Tshwane district.

“A reasonable assumption is being made that the cases described here represent infection with the new variant,” Abdullah said.

“This is a picture that has not been seen in previous waves. In the beginning of all three previous waves and throughout the course of these waves, there has always only been a sprinkling of patients on room air in the Covid ward and these patients have usually been in the recovery phase. The Covid ward was recognisable by the majority of patients being on some form of oxygen supplementation with the incessant sound of high flow nasal oxygen machines, or beeping ventilator alarms,” Abdullah said.

He explained that another change from the previous three waves is that younger people are being admitted.

“This is in keeping with the age profile of admissions in all public and private hospitals in Tshwane and throughout the Gauteng Province in the last two weeks as reported by the NICD and the Gauteng Provincial Government,” he said.

A key measurement of the severity of an outbreak is hospital death rate.

Abdullah said there were 10 deaths among those admitted in the hospitals where the research was being done, making up 6.6% of the 166 admissions. Four deaths were in adults aged 26-36 and five deaths were in adults over 60. One death was in a child in whom the cause of deaths was unrelated to Covid.

“There were no Covid-related deaths among 34 admissions in the paediatric Covid wards over the last two weeks.

“The trend over the next two weeks will be clarified as the number of deaths is currently low, and sufficient time will have elapsed for the development of greater severity of disease and the number of deaths might be expected to increase. For now, the death rates over the last two weeks, as well as over the past 18 months at the SBAH/TDH complex (around 17%), are lower than the overall in-hospital death rate of 23% for the country over all previous waves, as reported by the NICD,” he said.

He cautioned though that there was a lag between a rise in cases and a rise in deaths.

“The trend will become clearer over the next few weeks,” he said.

“There were only two patients in the Covid ICU in the last 14 days, neither of whom had a primary diagnosis of Covid pneumonia. Sixty-three (63) patients were admitted to high care, but our anecdotal information is that the majority of high care admissions were for a diagnosis other than Covid,” he added.

He added that three of the four patients in the high care ward had a primary diagnosis of severe Covid pneumonia, so it could be that the more recent profile is changing to more severe Covid disease.

“The relatively low number of Covid-19 pneumonia hospitalisations in the general, high care and ICU wards constitutes a very different picture compared to the beginning of previous waves. A detailed analysis comparing the current picture with previous waves is still being conducted. This may very well be related to the early upswing of the fourth wave, with the more classical pattern becoming evident over the next two weeks. What is clear, though, is that the age profile is different from previous waves. It may be that this is a vaccination effect as 57% of people over the age of 50 have been vaccinated in the province, compared to 34% in the 18-49-year group.

Last week Dr Mary Kawonga from the Gauteng Premier’s Advisory Committee said they were seeing a rapid and sustained increase in cases, and a rising test positivity rate, but at this stage hospitalisations and deaths were increasing at a much lower rate than cases. She too confirmed that there had been a shift from older to young people being admitted. DM/MC