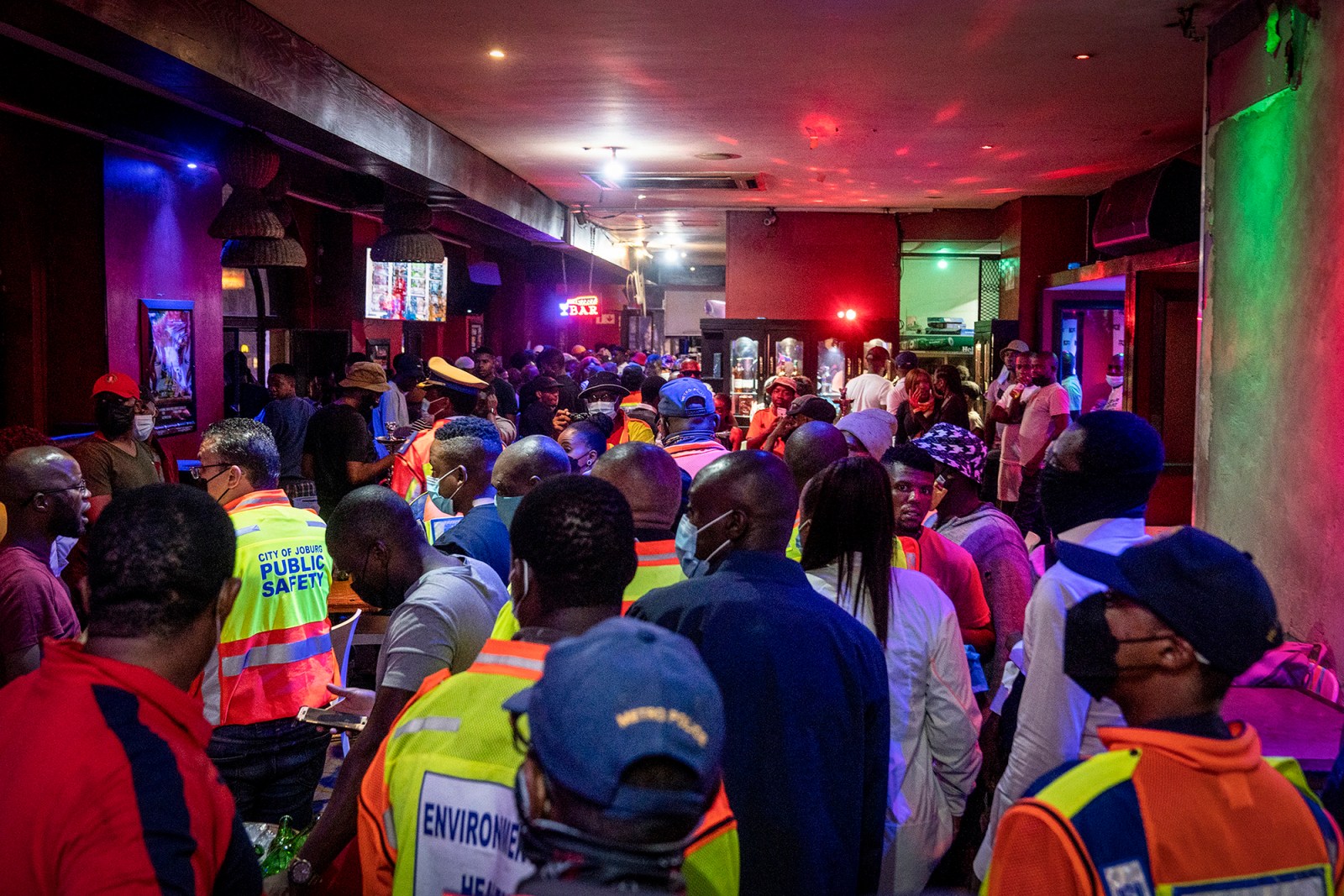 Patrons leave the packed-to-capacity Shisa Nyama on the corner of Main and Rissik streets, Joburg, after it had been shut down. (Photo: Shiraaz Mohamed)

‘We can’t allow businesspeople to kill people like this. I am not happy, I am extremely concerned. I think we need to make a statement, a very strong statement. This is unacceptable.”

These were the words of newly elected Johannesburg Mayor Dr Mpho Phalatse as law enforcement officials conducted a raid in a crowded bar in the Johannesburg CBD on Friday evening.

With the increase in Covid-19 cases in Gauteng, the operation was focused on places of entertainment, enforcing Covid regulations and checking safety compliance.

Phalatse said, “It’s just a matter of time before the fourth wave is fully here. It is the festive season, but over and above that, there is the Omicron variant.

“The numbers are skyrocketing. Today [Friday, 3 December] we are talking 16,000 cases in Gauteng alone, and we can only guess that most of those cases are in Johannesburg.

“We need to take responsibility for each others’ lives, so we will be sending out a very strong statement.”

And strong statements were sent out as a few establishments were shut down that evening.

The operation’s first stop was at Shiesa Nyama on the corner of Main and Rissik streets. Packed to capacity with no physical distancing, it was a matter of minutes before the place was shut down.

Smoke from hookah pipes filled the air in the basement converted to a VIP section. There was no ventilation.

Said one of the officers, who declined to give his name, “This place is a breeding ground for Covid, it is a superspreader.”

Several plainclothes officers brandished automatic rifles as they stood in strategic positions watching over the mayor, but patrons continued drinking and smoking.

EMS issued a notice of noncompliance because the establishment was overcrowded and the emergency exit was not accessible. People were asked to finish their drinks and leave.

A few blocks away, at the Majestic Bar, a man asked, “Do you know how much is a mask? Can the government give us masks?” as he mocked the enforcement officials. He was clearly under the influence of alcohol — and he was not the only one.

The establishment did not have a floor plan and was immediately shut down after being served a notice by EMS. This did not go down well with some of the patrons, one of whom stood outside arguing with two female JMPD officers. He was unhappy that he needed to leave and accused the officers of harassment.

At Andi’s Corner Nightclub and Adult Entertainment Venue, further downtown, strippers left the stage when they saw the place was being raided. They hurried into the change room and got dressed while patrons continued drinking and having a good time, seemingly unfazed by the huge contingent of officers.

The owner stood at a table showing officials his documents, but EMS officials issued a notice for no emergency signage, overcrowding and not managing the number of patrons inside. The establishment was shut down and once again patrons were ordered to leave.

“Voetsek, voetsek,” a voice from the crowd shouted at officers in Maboneng after they were asked to leave an establishment.

Said acting City Manager Brink, “There are high levels of resistance from partygoers and nightclub owners. We always have a tough time entering places with partygoers. You become a party pooper, but it’s not the case — we are in tough times.”

During a heavy downpour, patrons stood outside under balconies. Some were waiting for their Ubers to arrive, others stood drinking in plain sight of officers. A few moments later, JMPD Deputy Director Patrick Jaca left the establishment, carrying DJ equipment confiscated because of noise pollution. The establishment had also failed to comply with Disaster Management regulations.

Brink described the evening as “a clear disregard for the law and Disaster Management regulations. Here you find owners of nightclubs that are really just out there to make money, and at the same time compromising the health and safety of people.”

Brink had earlier explained that resistance did not only come from partygoers, as when the owner of Shakers Extreme argued with officials, saying he was compliant and accusing them of targeting him. Officials explained that they were merely enforcing the law.

It was after 11.30pm and there were still patrons inside the establishment. They were ordered to leave and the establishment was shut down. Its liquor licence was confiscated for non-compliance with Alert Level 1 regulations as the place was operating after the stipulated time of closure.

The patrons did not seem to be bothered as they stood in the hallway laughing and joking. An officer yelled at them to wear their masks, and one officer said, “It’s because of things like this there’s Covid. They don’t care.”

The owner later stood on the pavement, chastened after realising his predicament and told JMPD Chief Superintendent Mogomotsi Mashigo, “Sir, the mistake that I made is that I spoke to you irregularly, I did not speak to you respectfully.” Mashigo replied, “I told you I am not angry with you, I am doing my job, I am not emotional.”

Phalatse later told Daily Maverick, “A lot of people are really pushing boundaries. They think that we are sleeping on the job. Well, I have got a message for them: that the JMPD is not sleeping and we will be raiding these clubs, night after night until they get the message that Covid is still around and that it’s unsafe for them to be out at this time in the large numbers that they are in, in these type of spaces.

“Here in Johannesburg they thought it was a lawless city — that is over, it is a new day with a new dispensation.

“Clearly, if people are not going to comply, numbers will just keep on increasing and unfortunately we will have to have stricter restrictions. We don’t want that to happen because it impacts negatively on the economy, but it’s for all of those people who don’t want to be responsible with their lives and the lives of others.

“It’s unfortunate really, it’s a vicious cycle. People need to start doing the right thing and then we can start saving the economy.” DM/MC