Looking for a Spider-Man sequel? The real thing is spinning a Hollyweb blockbuster in our backyards 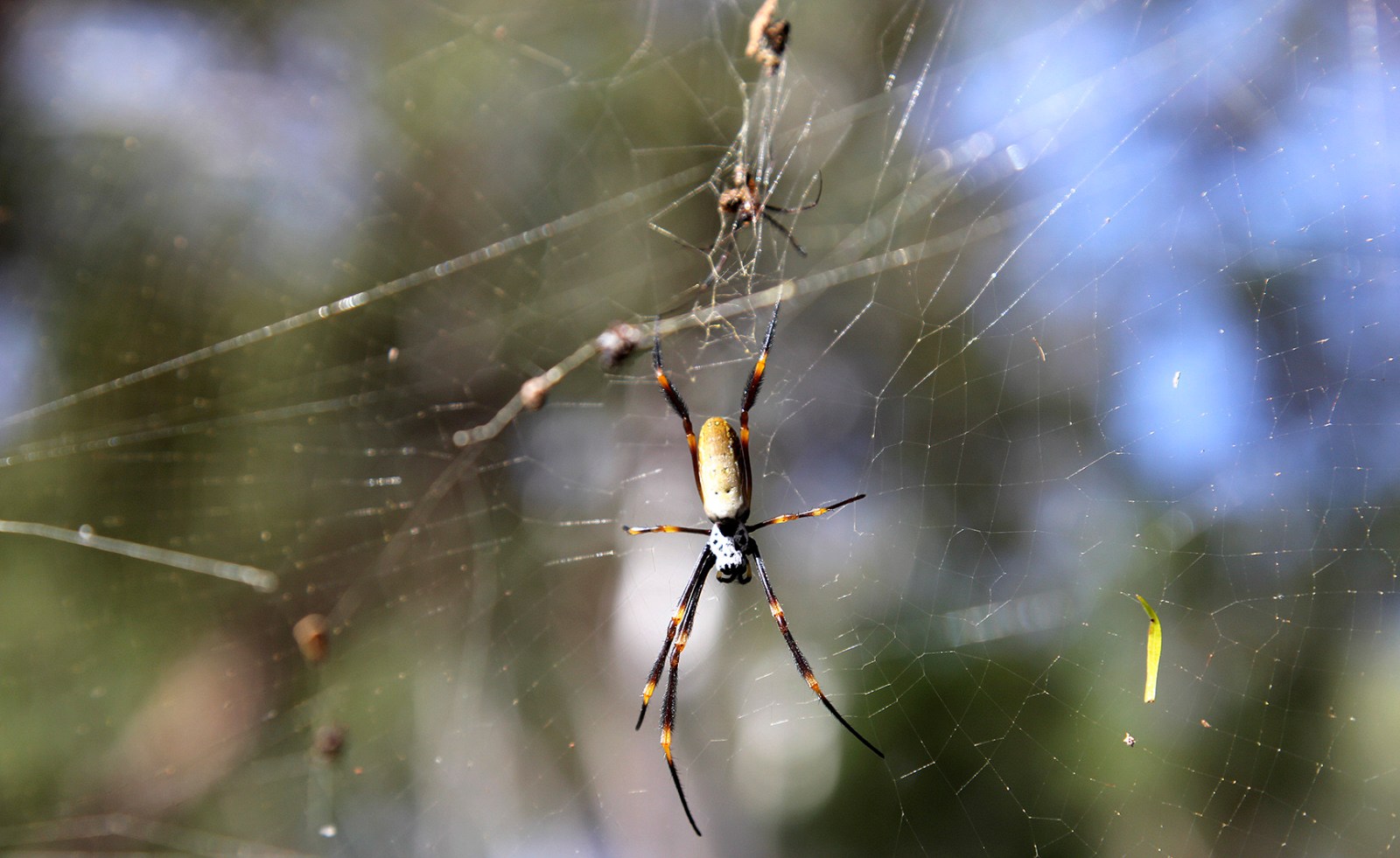 An Australian golden orb-weaver (Trichonephila edulis), which is known for its spiral, wheel-shaped webs, often spun anew each day. (Photo: Samantha Nixon/@SamNScience on Twitter and Instagram)

It’s not only the man in the red-and-blue suit who has superpowers – the real thing is pretty special, too, especially their webs.

The next instalment in the Spider-Man franchise will be showing at a cinema near you from 17 December. Expect the usual box office-busting blend of special effects, teen romance and non-stop action.

The plot of Spider-Man: No Way Home is under wraps for now, but with Spidey and his alter ego Peter Parker having already appeared in multiple theatrical and made-for-television films since 1977, it must be a stretch to come up with something new. The latest publicity material hints at our hero grappling with his own identity and in the process breaking open something called the multiverse, from which emerge supervillains he’s already fought in different realities.

But if this strikes you as over-elaborate or hard to believe, consider that some of the things real spiders get up to easily outdo the best Hollywood can conjure. In fact, if they are searching for ways to turn up the tension, for the next Spider-Man prequel or sequel, the scriptwriters would do well to study the real thing.

That’s if they haven’t already, of course. Studios often hire science consultants to help get the facts right and they would have advised the movie men that spiders, the eight-legged variety, pack real superpowers. Their days are filled with action and guile and their love lives are not so much teen romance as all-consuming affairs.

We all know about black widows (Latrodectus). It’s the disparaging name given to women who supposedly mimic the little arthropods (barely larger than an office staple) who sometimes devour their partners after mating. But how many of us have heard of the false crab spider (Thanatus fabricii)? Males of this species bind their potential paramours in a web of a specific silk type to immobilise them before mating. More Fifty Shades than Marvel Comics, but it could certainly pep up Parker’s tale.

Then there are the webs, striking in beauty, function and form.

The late James MacDonald was eloquent in his description of these. The ecologist spoke about the evident design sense and how webs may include features called stabilimenta.

Stabilimenta break the symmetry of the web. That’s because they are thought to act as camouflage, hiding the spider within the hub or the centre of its web. And because the filament of webs is reflective, it may attract prey while deterring larger animals, saving the web from destruction. These are contradictory features, yet very useful.

Webs provide shade, too, serving as a thermoregulator for smaller spiders, something that has been compared to parasols or umbrellas. Another hypothesis is that stabilimenta act as a reservoir for the extra silk spiders produce when prey is scarce. Spiders do this, it is thought, because it helps them to recharge their silk glands by depleting them. Practice makes perfect, perhaps.

Spiders spin silk in many forms – some sticky, some not – depending on its purpose. The silk is pretty special stuff, not least because of its high-tensile strength. It’s regarded as one of the strongest materials in nature and simplistic claims are sometimes made that it’s stronger than steel. Well, that really depends on the steel alloy in question and what we understand by strength.

What really makes spiders’ silk so remarkable is that it is strong and flexible. In scientific terms it’s said to have toughness – a relatively high ability to absorb energy and deform without fracturing.

Adam Savage, assisted by Dr Todd Blackledge, a professor of biology from the University of Akron in the US, tested the stronger-than-steel hypothesis in an episode of the television programme Mythbusters Jr. Over two months Savage, Blackledge and their researchers collected about 16km of silk from 40 golden silk orb-weaver spiders. The species was selected because its silk is robust and comparatively thick. But bear in mind, a single strand of this silk is 50 times thinner than the average strand of human hair. See for yourself if the myth was busted or not on the Science Channel.

Golden orb spiders are found throughout the world and are known for the size of the webs they weave. These have a golden sheen which is thought to be due to the presence of carotenoid compounds.

The toughness of spider silk suggests it’s likely to have many applications, particularly as the silk of some spiders appears to be resistant to being broken down by microorganisms under the right conditions. This makes it well suited to medical and agricultural applications.

Three spider species (Cyrtophora moluccensis, Hippasa holmerae, Nephila pilipes) produce webs that are resistant to microorganisms, inhibiting the production and growth of bacteria without killing them. The silk does this by limiting nitrogen which bacteria feed on. Interestingly, spider silk is made from a silk protein called fibroin.  Fibroin is made up of a chain of amino acids, the building blocks of life – Glycine-Serine-Glycine-Alanine-Glycine-Alanine in a repeating pattern. Amino acids are nitrogen-containing compounds. The manner in which silk limits the nitrogen supply is yet to be understood.

Spider silk has historically been used as a suturing material because of its high-tensile strength, because it is compatible with living tissue, and is broken down slowly by microorganisms – properties that make it an ideal material for medical applications such as dressing slow-healing wounds.

The venom of a few species is dangerous to humans and scientists are now researching the use of spider venom in medicine and as non-polluting pesticides.

Potentially, spider silk has many other uses beyond the medical field, including in the military, textiles, environmental protection and materials fields. Researchers have begun evaluating “spider silk bionic material” as a sustainable new synthetic material. The problem is, it’s hard to make. Unlike silkworms, spiders do not take kindly to being bred in captivity and milked of silk. They are territorial and can start cannibalising each other.

Scientists to the rescue

However, scientists have enjoyed some success with their efforts to synthesise spider silk.

Well, that’s some yarn! Now if the men and women in the lab coats could only come up with some of those nifty, wrist-mounted web-shooter devices we could all get in on the superhero action. DM/OBP

Looking for a Spider-Man sequel? The real thing is spinning a Hollyweb blockbuster in our backyards