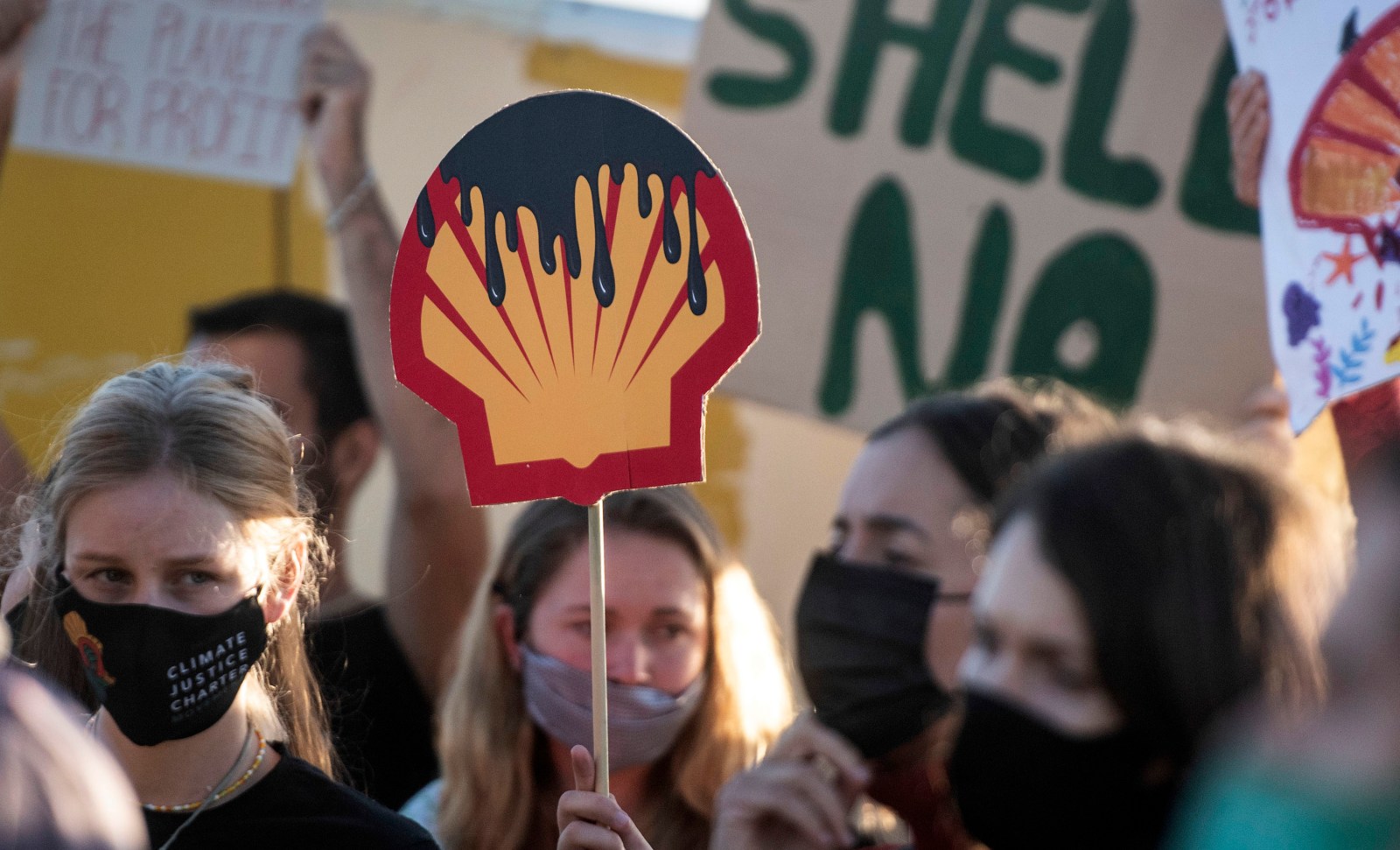 People at the Victoria & Alfred Waterfront in Cape Town protest against the arrival of the Amazon Warrior survey vessel on 21 November 2021. (Photo: Gallo Images / Brenton Geach)

‘We are starting to understand what the impact of the seismic survey is. On the ocean, sound is a navigation tool. It’s how animals find their way around, find prey and how they find food.'

Judy Mann-Lang, a conservation strategist at the South African Association for Marine Biological Research, told a Daily Maverick webinar on Thursday there is increasing evidence that points to the impact of seismic surveys on marine animals.

On Wednesday, Cullinan & Associates, acting on behalf of Border Deep Sea Angling Association, Kei Mouth Ski Boat Club and Natural Justice, applied to the Makhanda High Court for an urgent interim interdict for Shell and Impact Africa to stop their seismic survey in search of oil and gas off the Transkei Wild Coast.

Judgment on the matter will be delivered on Friday, 4 December.

Speaking during the webinar, Mann-Lang said: “We are starting to understand what the impact of the seismic survey is. On the ocean, sound is a navigation tool. It’s how animals find their way around, find prey and how they find food.

“The research that we have had, and looking at over 50 scientific reviewed papers, most of those papers are pointing to impact and those impacts range from sublethal impact — so, the animals may not necessarily die, but there could be changes to their communication in water.

“There are cases of immediate impact to the animals, as animals will move away, and sometimes the impact is long term. We often don’t know what those long-term effects are and often we need to think that lack of evidence doesn’t necessarily mean that there is lack of impact.”

She said because marine animals don’t wash up and float to the surface doesn’t mean that there is no impact.

“We have seen impact on animals ranging from those tiny floating fish on water, to fish, turtles and invertebrates, to marine mammals. So, the seismic survey does impact marine animals,” Mann-Lang said.

She said the Wild Coast is an incredibly important area from a marine biodiversity point of view.

“It is a transition zone; it’s a place of change. We’ve got the warm tropical waters that are meeting the cooler-temperature water in this area. This gives a rich biodiversity, so lots of varieties of marine animals live in this area.”

Mann-Lang said many of the species off the Wild Coast are endemic and it is South Africa’s responsibility to look after them.

“If we lose them, we can’t buy some anywhere in the world. They are our marine life that we have to look after. The endemism of the areas is very important.”

She said many deep-sea ecosystems were only starting to be revealed.

“They are new to us, but very old on the planet because we are only starting to understand them now. Now is not the time to start damaging these ecosystems before we know the diversity that lives there.”

Mann-Lang said the Wild Coast has one of the most powerful ocean currents in the world — the Agulhas Current.

“Our concern is that if oil or gas is found there, how are they going to extract it safely, given the incredible powerful current washing down that coast? How are they going to mitigate the risks of this current? What happens if something goes wrong? They don’t know. Predicting this current is difficult. It is not called the Wild Coast for nothing.”

She said a lot had changed since authorisation to conduct the seismic survey had been granted to Shell.

“A bit of good news in this campaign against Shell is to see so many thousands of people passionate about the ocean and the Wild Coast. Our research shows that just signing the petition is a step in the right direction to reducing our reliance on fossil fuels.”

Human rights lawyer Dr Pooven Moodley told the webinar that most people became aware of the survey through the media, as there was no information sent out to interested and affected parties.

“This information came out in a small advert in a small newspaper. It took a couple of days. Once it became a bigger story, Natural Justice and other organisations started looking at exactly what was going on. The big part for us was going to and writing to the assessment practitioners to ask for the information to understand what was this right that was granted and what is the content of it.”

He said they received some information at the beginning, but not all of it.

“So, we had to write again, but outside of that we then started approaching both the ministers [of mineral resources and energy, and of forestry, fisheries and the environment] and wrote to them and hoped to get a response. We also wrote to Shell, just to see that this case does not have to be brought on an urgent basis, but we can find a way in the legal process so that we can argue the case.

“We did not want to go to court before doing all of this, because we thought it was fair to get an opportunity to hear from both the government and Shell before going to court.”

Panellist Nonhle Mbuthuma of the Amadiba Crisis Committee said: “The only thing that is put first is to make profit out of nature and to destroy Mother Earth.

She said that is why they will have a protest on Sunday, where people will say no to oil and the destruction of the ocean.

“We are worried that if the survey goes on, there is going to be a huge impact on marine life and the ecosystem. We are afraid that this will affect the people who are living along the coast. We understand that the economy of this country is in crisis, but we cannot compromise human lives and human rights over profit.

“This is the time for the government to listen and not take decisions on behalf of the people without the people.” DM/OBP