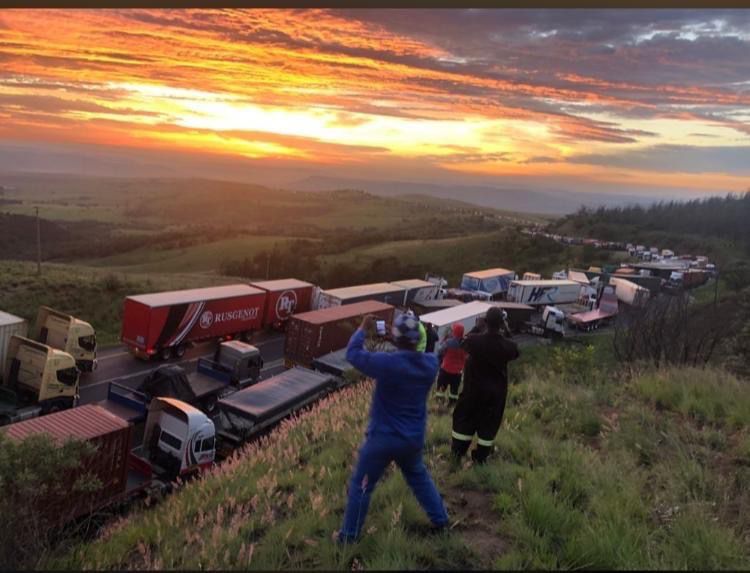 Truckers blocking the N3 at at Van Reenen’s Pass in KwaZulu-Natal. (Photo: Supplied)

Dozens of long hauler trucks are still stranded on both carriageways of the N3 at Van Reenen’s Pass as a result of an illegal protest that started in the early hours of Friday morning.

The Road Traffic Inspectorate (RTI) confirmed with Daily Maverick that at least 50 trucks were at one stage “stuck” in the area.

“We are not sure if all of those trucks are part of the [protest]” said RTI KwaZulu-Natal spokesperson, Zinhle Mngomezulu.

The blockade started around 4am, with Mngomezulu and SAPS KZN confirming that protesting drivers were taking the keys of non-protesting truckers, thus forcefully stranding the vehicles.

The same modus operandi was used by some KZN truck drivers during the July riots.

SAPS Public Order Policing members were in attendance at the scene, but Mngomezulu said that from what she witnessed, the officers were “not being very active” and appeared to be “short of manpower”.

Haulers were also backed up on the M7 near Umbilo’s Southway Mall early on Friday as the result of a broken-down truck, with sporadic looting of that vehicle’s goods taking place.

Mngomezulu told Daily Maverick that she was unaware of the congestion on the M7, but provincial police confirmed that POPs were also in attendance there.

There had thus far been no looting of any of the trucks stranded on the N3, said Mngomezulu. Nor were there any reports of other efforts to further block the road with debris or tyres.

Protestors had also tried to block alternative routes, she said.

The roads were expected to be cleared within an hour, she added. “We are bringing in tow trucks”.

The protest comes on the same day that minister of police Bheki Cele is expected to testify at the South African Human Rights Commission (SAHRC), which has temporarily set up office in Umhlanga to probe the July riots. Police have been severely criticised for their lack of response, or inadequate response, to the riots, which also started with blockades of the N3.

The blocking, looting and burning of trucks on the critical N3 route — which joins the port city of Durban to the interior — is not a new phenomenon in KwaZulu-Natal. Dozens of trucks have in previous years been torched during protests by local truck drivers who demand that foreign drivers not be employed before locals.

The Road Freight Association issued a statement on Friday saying that the country’s trucking industry was “once again being held hostage by those who prefer to work outside of the law”.

The association’s chief executive, Gavin Kelly, said in the statement that “according to some reports” “violence and looting” had taken place.

Kelly said that individuals had “taken the law into their own hands to pull drivers from trucks to check their personal documents”.

“The Road Freight Association has called on Government again and again to do what is necessary. They must deal with those who see themselves above the law — arrest, detain and investigate the inciters, those who perpetrate these acts, and those who take it upon themselves to act like police or authorities of the State.

“Those employers who continue to break the law, are not registered with the various authorities as required by various legislative prescripts or continue to employ individuals at rates below the minimums, must be dealt with. The SAPS must intervene and take action — not stand on the sideline and ‘monitor’. We are fast losing any respect as a safe, efficient and desirable route for the movement of goods out of, and into, Africa — and even South Africa.”

Calls to join a “national shutdown” on 2 December were distributed via social media platforms this week, but were soon dismissed as fake news. In the posters, demands were being made for a decrease to the petrol and diesel price, and a reduction in VAT to 10%.

Various pressure groups in recent months have called on the South African government to station substantial numbers of law enforcement officers on the N3 in order to stop the blockages. Some have even called for the Mooi River Toll-Plaza, which is often the scene of protests and arson attacks on long haulers, to be moved. DM