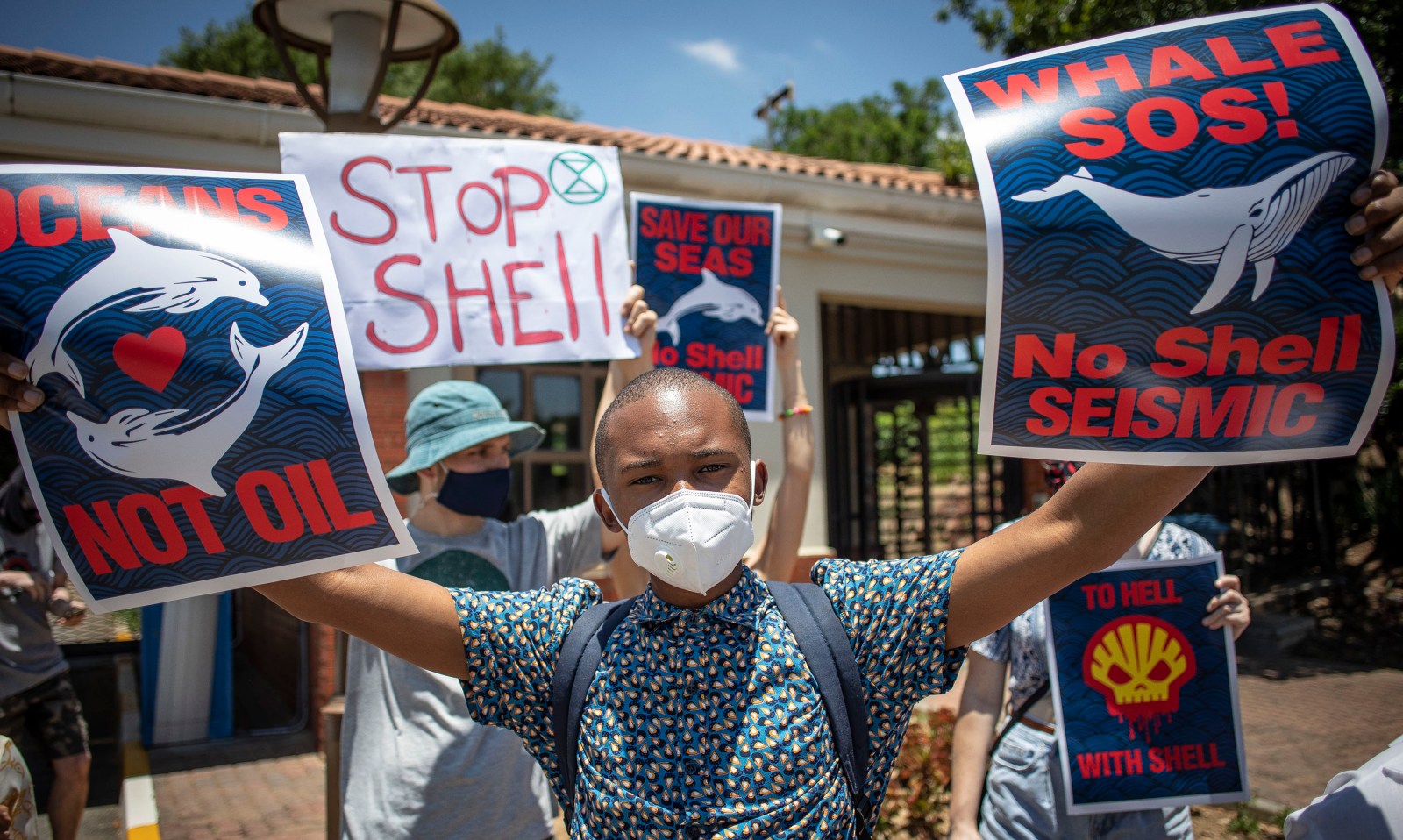 Environmental activists from Extinction Rebellion and other organisations protest outside the head offices of Shell in Sandton, Johannesburg, South Africa, 01 December 2021. The protest is aimed at stopping the seismic survey by Shell that will be carried out for between four to five months, 20km off the coast between Morgans Bay and Port St Johns of the east coast of South Africa. (Photo: EPA-EFE/KIM LUDBROOK)

The Makhanda High Court has given Shell the nod to go ahead with the seismic survey on the Wild Coast after dismissing an urgent interim interdict application on Friday morning.

The Makhanda High Court has given Shell the nod to go ahead with the seismic survey on the Wild Coast after dismissing an urgent interim interdict application on Friday morning.

Delivering the judgment, Govindjee said the applicants failed to convince the court and that the survey’s delay would prejudice Shell financially.

“The balance of convenience is in favour of Shell. In the urgent application, the applicants have failed to produce evidence that there is a genuine apprehension of irreparable harm to the marine environment particularly given the mitigation measures that Shell would put in place in line with the environmental management programme [EMP],” he said.

Govindjee said Shell indicated that it has already spent millions of dollars preparing for the survey.

“If the interdict is granted this would be lost and it would be in contractual breach of an exploration right that was obtained years ago,” he said.

Govindjee said weighing up massive financial consequences against the possible harm to the environment, the evidence favoured Shell.

“With mitigation processes in place the irreparable harm would be minimised,” he said.

He said the applicants had successfully established that there had been no undue delay in bringing the case and the urgency of the matter justified the departure from the usual rules so that the matter could be heard urgently.

“The public interest in this case is palpable,” he said.

But Gavindjee expressed doubts as to whether the applicants would succeed in reviewing and setting aside the grant in 2014 of the exploration right (because of how much time had elapsed) or of the first renewal application because the lapsing of that renewal meant that the issue was now moot.

“In the second renewal application, the applicants had succeeded in establishing that they had prima facie prospects of success due to the apparently inadequate public participation.

Natural Justice issued a statement after the ruling, saying they were dismayed that the court had dismissed their application without granting their request to be allowed to return to court to make further representations and present expert evidence, and awarded costs against them despite the fact that the application was made in the public interest to protect the ocean and coastal environment.

“The applicants had anticipated being able to present further expert evidence of irreparable harm on the return date. The application had to be made on a hyper-urgent basis [as a consequence of Shell’s actions and the inactions of the Minister of Mineral Resources and Energy] which meant that it had not been possible for experts to finalise detailed reports and affidavits by the time the application was launched,” read the statement.

They said the applicants would be discussing the judgment with their legal advisers to decide whether or not to apply for leave to appeal against these aspects of the judgment.

“In the interim, we will be doing all we can to support the application made [on Thursday] on behalf of Wild Coast communities who are seeking to interdict the seismic surveys on the basis that Shell does not have an environmental authorisation to undertake them,” read the statement.

“Not only will the blasting destroy precious biodiverse ecosystems, but it will also destroy the livelihoods of local communities, all in the name of profit,” he said.

Khambule said they will continue to support the nationwide resistance against Shell and pursue the legal avenue to stop Shell.

“We must do everything we can to undo the destructive colonial legacy of extractivism, until we live in a world where people and the planet come before the profits of toxic fossil fuel companies,” said Khambule.

Pooven Moodley, executive director of Natural Justice, said the outcome was unfortunate, since the judge did not recognise the urgency of the interdict and the immediate threat the seismic surveys pose to the environment, marine life and local communities.

“Our fight to safeguard the Wild Coast is not over, and our bigger struggle for climate justice, and to resist oil and gas drilling in South Africa and across the entire continent is far from over. As activists, civil society and lawyers, we cannot relax – the climate crisis is upon us, and fossil fuel companies accelerating the crisis are posing a serious threat to the planet, our livelihoods, human rights and very existence. We will fight them on the beaches and in court,” said Moodley.

John Rance, chair of Kei Mouth Skiboat Club called the ruling “unthinkable”.
“We’re saddened by the result but happy we did all we could under the circumstances. The seismic survey may go ahead, but there’s going to be one helluva shindig before mining starts.”

“Shell and its shareholders should be ashamed of themselves. We should all be telling our investment advisers and pension funds to disinvest from Shell. It’s the only language they understand,” he said.

John Luef of the Border Deep Sea Angling Association said they are extremely disappointed with the outcome of the hearing.

“This is not the end; we will continue to fight for our local people, their heritage and the environment. We call on South Africans to stand together and protest this invasive and environmentally harmful seismic survey, as well as any future mining plans,” he said.

“Our application will be heard on 14 December 2021. Amadiba is represented by Amadiba resident Sinegugu Zulu of the NPO Sustaining the Wild Coast and by Mashona Wetu, induna in our Head Women’s Council of Umgungundlovu, on the Amadiba coast, as well as four representatives of fishing communities along the Wild Coast,” she said.

“Shell doesn’t have an environmental authorisation. Meanwhile, the preparation for the march against Shell on Sunday, 5 December continues. The villages on the coast start our march at Mnyameni river mouth at 9am, heading for the Mzamba river estuary. We will meet protesters gathering at 10am at Wild Coast Sun and going to Mzamba and hold a joint protest meeting,” Mbuthuma said.

She said it is time for the government to respect the rights and the economies of South Africa’s indigenous communities.

“To respect Mother Nature, this is the mother that feeds us all. Without her we are nothing,” she said. DM/OBP