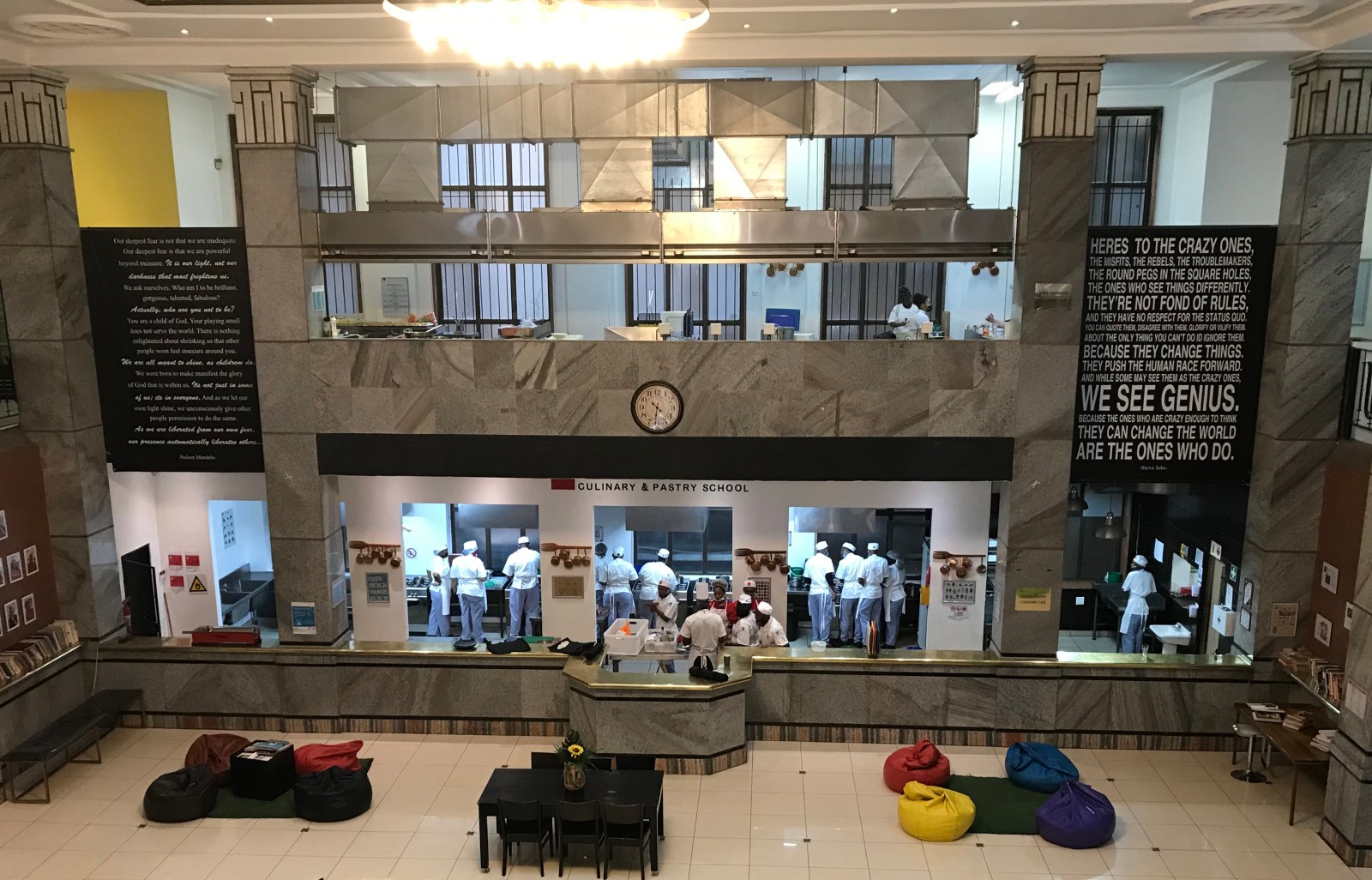 In their layers of kitchens, the students of the JHB Culinary and Pastry School. (Photo: Marie-Lais Emond)

In the ignored heart of the old City of Gold, overlooking triple volume Jozi history, the JHB Culinary school is making history of its own.

For people who’ve not visited the heart of Jozi (yes, like you, Sandtonians) there are usually squeals of surprise when they do. A big squeal is reserved for the rather beautiful historic buildings in the centre of “town”. The streets weren’t designed for the height and shadows cast by the large heritage buildings so it’s always a few degrees cooler on the pavements and we have to look up to appreciate our century-old architecture.

In Commissioner Street, in 1886 the German Carl von Brandis sat inside his tent as the gold commissioner, issuing trading licences before this was a real street. Fifty-two years after the commissioner’s tent went up, the late deco style Barclays Bank went up at 85-87 Commissioner, designed by Gordon Leith who was once a Herbert Baker architect. It contained some of that gold.

I’m sitting up in its gleaming brass and polished wood gallery that is the bar part of nicely appointed Conception, a restaurant. It wraps around to a side gallery, all overlooking a triple volume banking hall with deco motif pillars and marble floor. The balcony of the side bit also overlooks Harrison Street.

I keep peering into a room though another doorway until I realise I’m looking into a spotless mirror.

On the far side of the hall are tiers of kitchens, bustling with white-swathed cooks, something like an impossible French movie set. I can’t help watching them in their layers of kitchens, the students of the JHB Culinary and Pastry School.

Jarlyne Joel is at a table behind me, planning a TV shoot. This cookery school has shot to international and national fame for various reasons, the chief one being the breadth of experience the students get here before they qualify as chefs.

I’m also trying to work out which of the cooks or chefs-to-be are making my lunch. I have a feeling it’s a man on the upper left tier but I can’t be sure.

Jarlyne’s husband started all this 10 years ago, having once had no hope himself. But even no-hopers deserve chances.

His mom was working. Kelvin Joel was alone at home in gangster-notorious Westbury and up to no good from when he was just 10. He drank and got involved with drugs, dealing, missing a whole year’s school. At 13, somehow he ditched the mandrax tabs in his pocket and took himself to the church shelter where some of his friends had gone. He was taken in on condition that he returned to school and did chores at the shelter. He was given kitchen chores. He discovered his love of cooking. He decided he wanted to be a chef.

With no hope of paying for culinary school, he interned at the Parktonian Hotel and Rudi Liebenberg, today the executive chef at the Mount Nelson’s Planet, recognised the teenage Kelvin’s talent and arranged for him to work with pastry chef Linda Kotze at the Hyatt in Rosebank. From there he excelled, travelled internationally, qualified and shone, representing South Africa at the Culinary Olympics.

He wanted to change the lives of people with fewer of the privileges that could turn them into chefs. He and Jarlyne, his wife, with her insurance industry business background, did just that.

When I first met Kelvin he had the cookery school, concentrating on cakes and pastries in Maboneng. From there, he and Jarlyne moved the premises to a much bigger space, with bigger teaching projects, also in Maboneng. As a fully fledged chef school with accredited qualifications for students, two years ago they moved it to these even bigger premises in this historic building.

The banking floor down there is used for TV programmes, tables where the students hang out. Up here at Conception, their wares are served, priced very economically, produced as part of their practical restaurant experience, among many other disciplines and interesting add-ons like chocolatery practice and even barista experience.

The menu today features their Jozi burger. I’ve heard so much about this beef burger that I ordered it. Other good specials are umngqusho. malva pudding, hake and chips and, on Fridays, sushi.

Kutlwano Ramotsiepe, a student doing some restaurant management, is making her way to me with it. She tells me that it was indeed the person that I thought I saw that made it.

I very much enjoy my chosen meal and, above all, eating up here in this historic building, really relishing what may be one of Joburg’s best burgers simply for the artful treatment and quality of the ground beef, perfectly caramelised with all its juiciness. It’s accompanied by a pyre of lightly spiced chips of my favourite “slap” sort, the bun, all the sauces and relish made by these students’ own fair hands. What a good deal, what a joy in every way. What a find for the public.

I make my way round to the top left kitchen afterwards, to meet the man behind my burger, Jerry Moeng. He’s qualifying as a chef at the school, in his first year, after having worked in restaurants “for ages”.

In addition to the school, Kelvin and Jarlyne run, as ever, their Sea Biscuit Fund and Scholarship Programme, in association with the JHB Culinary and Pastry School, to support previously disadvantaged youth to develop their skills in the culinary arts. They choose students with a lack of funds but a lot of dedication. Till now 37 students have completed the programme and nearly all of them are currently employed or have started their own enterprises.

It seems just to me that this historic place, the original bank building, constructed at a time when the Witwatersrand gold reef was the most prolific in the world, enriching the privileged at the expense of many and remarkable for its “generous use of pleasing, expensive materials and excellent craftsmanship and finishes”, is now the location for creating privileges for those would-be chefs who deserve them. Neat. DM/TGIFood

4 December: Christmas wares market from 10am.