Just 13 years ago, a whitepaper was circulated on a cryptography mailing list. It proposed a radical alternative to the established concept of currency at a time when the world was still clawing its way out of one of the worst recessions in history, brought about by the failings of the global financial system.

The technology described in that whitepaper was revolutionary as it was the first trustless, peer-to-peer electronic payment system that was fundamentally designed to be transparent and censorship-resistant. The way this was all possible is through a distributed ledger technology called blockchain. The blockchain allows for the native transfer of value from one point to another through a digital asset called Bitcoin.

The potential that it represented quickly began to draw the attention of talented software developers and cryptographers. In 2010, one such programmer, Laszlo Hanyecz, convinced a Papa John’s Pizza outlet to allow him to pay for two pizzas in Bitcoin. He paid 10 000 bitcoin for his dinner that night. Today, 10 000 bitcoins are worth roughly $580 million.

It can no longer be argued that the Blockchain is among the most significant pieces of technology ever created. It made it possible to transfer value or store wealth via the use of Bitcoin, which was nothing short of revolutionary. Not only has Bitcoin grown into an asset with a market cap exceeding $1 trillion, it also introduced the world to the concept of a transactional system that is inherently secure, without the need for any individual or institution to act as a governing body. In doing so, it has inspired countless great minds to question how else decentralised systems can change the world. This has given birth to the crypto market as we know it today. A $2.5 trillion dollar market made up of hundreds of blockchain technologies, all of which owe their existence, whether directly or indirectly, to the original cryptocurrency, Bitcoin.

While many still consider the terms crypto, blockchain and Bitcoin to be interchangeable, the reality is that while Bitcoin remains the largest cryptocurrency by market cap, there are now countless blockchain technologies attempting to solve a huge range of problems, ranging from bankless transactions to monetising art and gaming. Where the Bitcoin blockchain’s native token, or currency, is called Bitcoin, each of these blockchains or cryptocurrency projects issues its own token, which the crypto community has come to call altcoins.

Because Bitcoin, the original cryptocurrency, continues to hold the top spot in terms of market cap, essentially every other crypto is generally referred to as an alternative to Bitcoin. Hence the term ‘altcoin’.

As an example of how diverse the altcoin space has become, the diagram above shows the ecosystem that has been built on just the biggest altcoin technology, Ethereum. Ecosystems of similar scale and complexity are being built on several other blockchain platforms, such as Solana, Polkadot and BNB, to name just a few.

Despite how far it has come,  Bitcoin is still in its infancy by any measure and still represents an excellent investment opportunity. The great news for investors, though, is that several altcoins now present a similar investment opportunity that Bitcoin investors had ten years ago. With many altcoin technologies still working out the kinks and discovering their own capabilities, investors have the chance to become early investors in technologies with the real potential to fundamentally change the world.

How big could the altcoin market get?

Are altcoins just a fad, and is Bitcoin still the only truly promising investment in the crypto space? A look at the total altcoin market cap over time suggests the answer to that question is a resounding no. 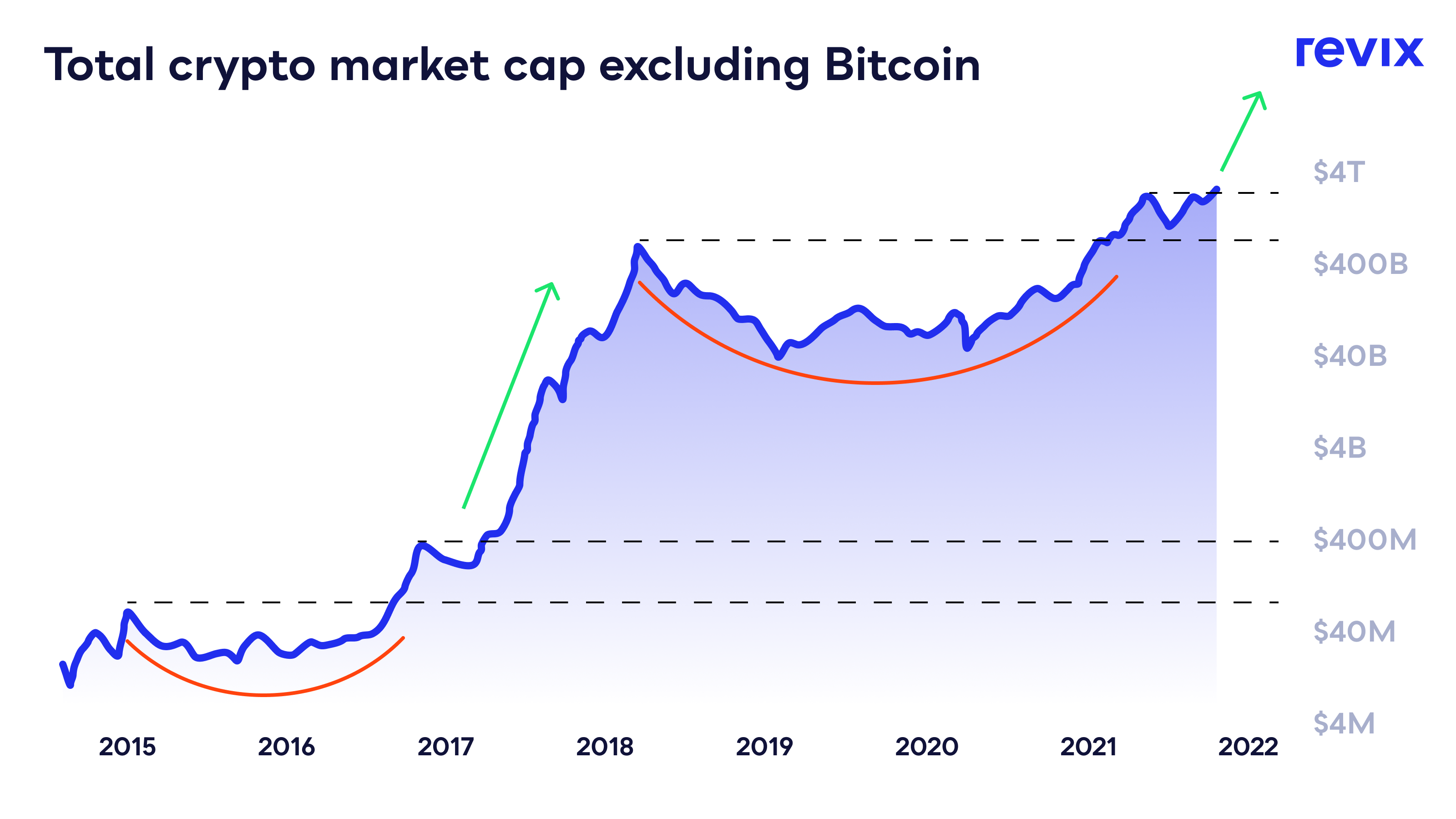 The graph above shows the total crypto market cap excluding Bitcoin, between 2015 and 2021, with an indication of where the pattern suggests the market cap is likely to climb to in 2022. The unrelenting long-term upward trend is clear, but this graph also gives us another key piece of information. Take a look at the patterns indicated by the red curves and green arrows. You’ll notice there are clear similarities between the two periods in question, namely 2014-2018 and 2018-present.

The 2014-2018 period shows an accumulation phase (red curves), followed by an exceptionally steep upward trend in the value of all altcoins (2017 green arrow). The graph then shows a similar accumulation phase, which has taken place in the 2018-2021 period. That means, right now, we are squarely in the same stage of the crypto price cycle that we were in when we last saw that meteoric altcoin price rally in 2017.

The phases indicated by the green arrows on the graph are referred to by the crypto community as alt seasons. Alt season is the crypto term for a period where alternative coins outperform Bitcoin, presenting a far wider range of investment opportunities than a focused Bitcoin rally.

The primary reason why crypto investors are so interested in understanding when an alt season might be happening is because returns during an alt season can be truly exceptional and are often generated in a remarkably short period of time.

How do I know when it’s alt season?

Fortunately, there are a host of metrics and indicators that investors can use to gauge whether or not an alt season seems to be gaining traction. Unfortunately, this is a double-edged sword. With the deluge of often conflicting and subjective messages that the crypto media aims at investors, it’s vitally important to focus on objective data in an appropriate time scale. Fortunately, that’s exactly what we’re going to provide you with in part two of this series of articles! So tune in for Part Two next week.

Meanwhile, why not wear your Bitcoin on your sleeve?

Whether you’re brand new to crypto investing or someone who has paid for a pizza with Bitcoin, the original cryptocurrency’s legendary status won’t be lost on you. So you’ll be excited to discover that Revix, a Cape Town-based crypto investment platform, is running a competition to win a prize that will make it easy to show the world that you’ve taken the crypto revolution seriously. 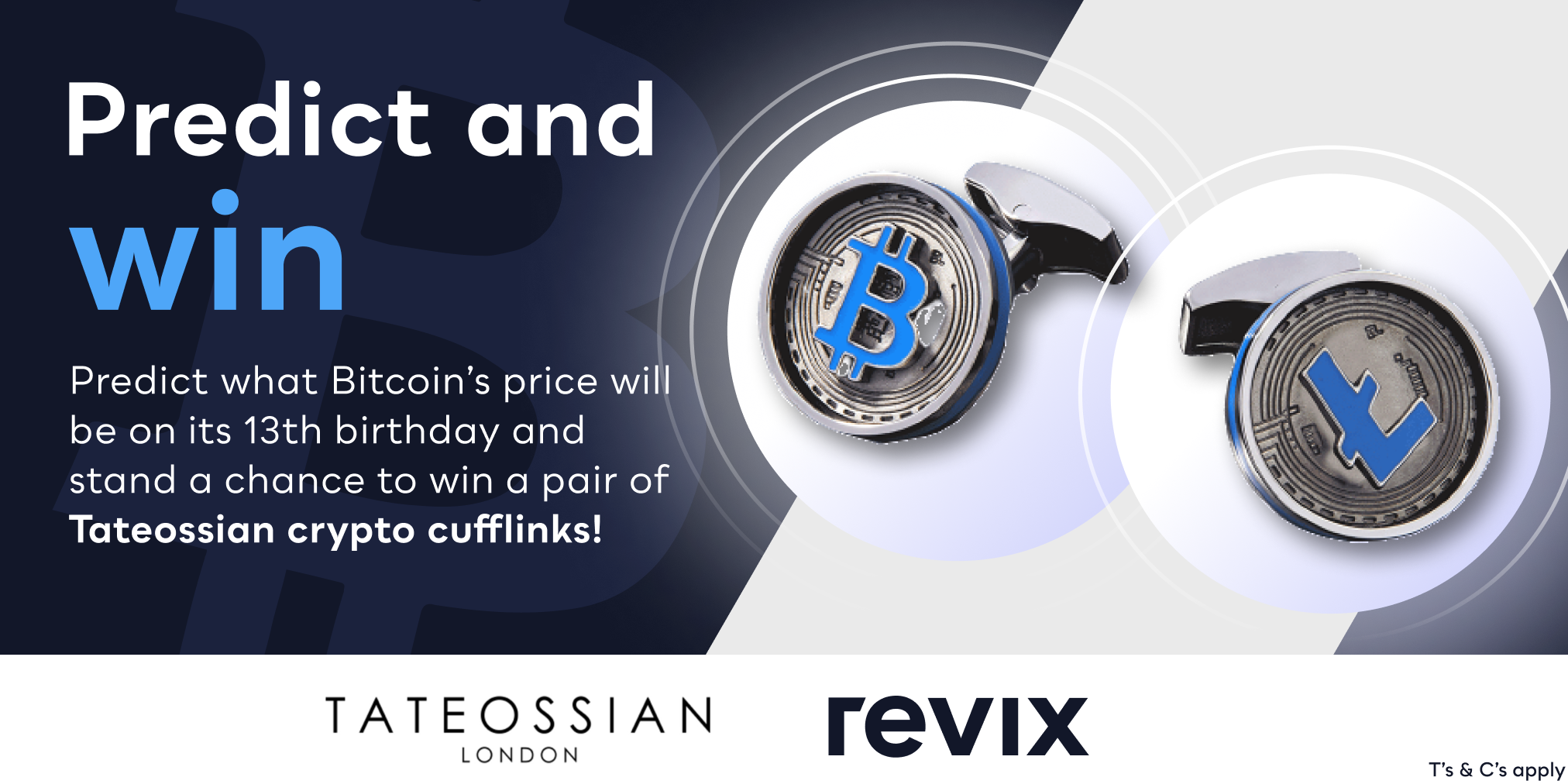 Predict what you think the Bitcoin price will be on the 3rd of January 2022 at 12:00 PM, and make an investment of R500 or more in Bitcoin via Revix’s platform, and you could win one of three exclusive pairs of  Tateossian® Blockchain Cufflinks. Follow the instructions on
this link to enter. DM/BM