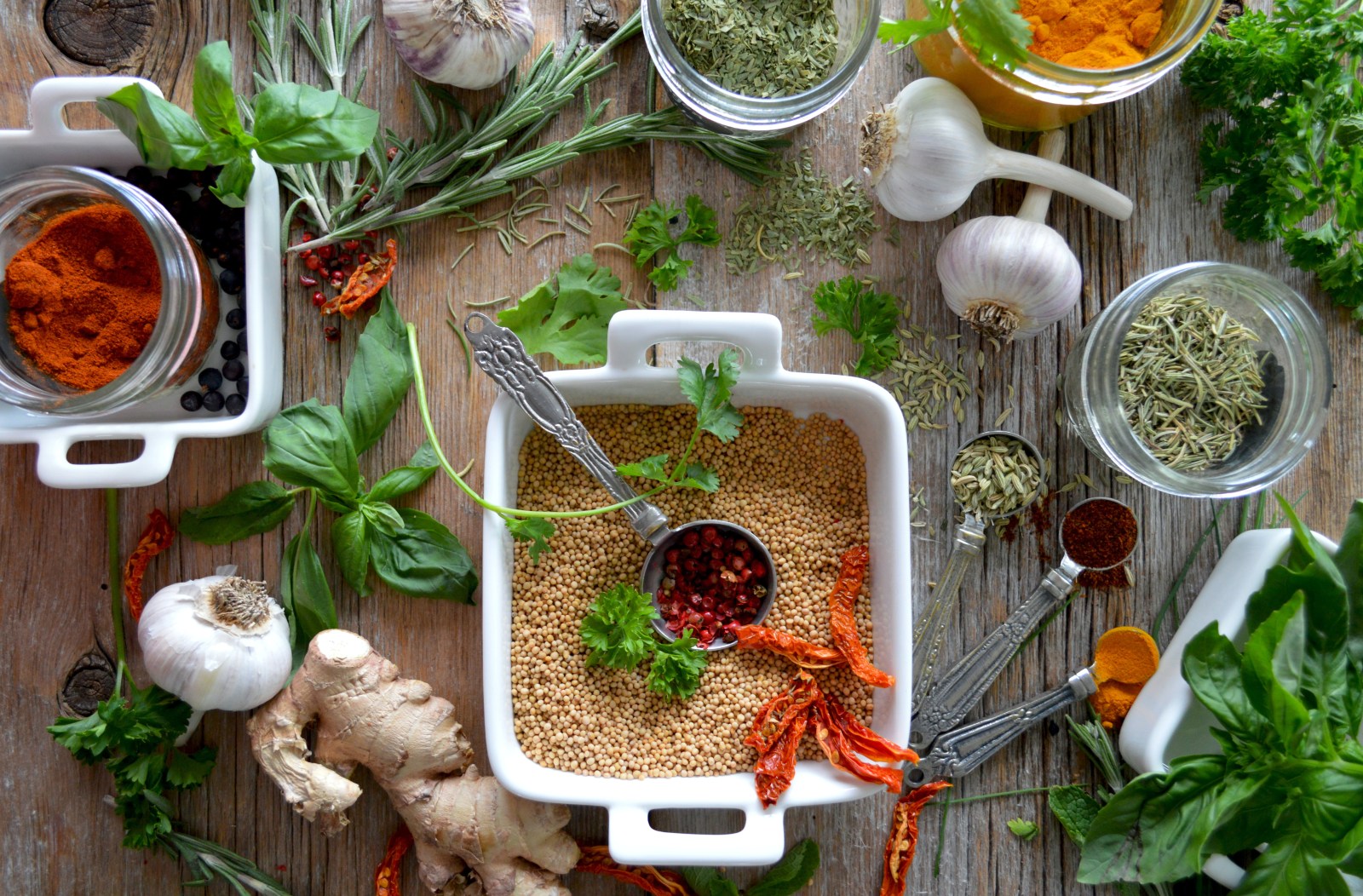 They’re the bedrock of flavour, the ground floor of taste. The aromatics that make all the difference to our food.

I have many cookbooks. My favourite, though, is one of the oldest in my possession, and without challenge the most battered. It is Richard Olney’s The French Menu Cookbook and the 33-year-old inscription in it is signed by my wife Diane in 1988. She wrote: My dearest Tones, I hope this gives you – and consequently me! – many happy hours. Love you, Di. We can both attest that her wish came true and remains true. The book has fallen apart and even the hard cover, today, is battered, if not yet deep-fried.

This column pairs well with this recipe.

My favourite chef, on the other hand – in context of the contemporary foodie faddism of every second famous cook being a “celebrity chef”, whether or not their fame has any meaning – is also, now, one of the oldest: Marco Pierre White. Paradoxically, White scarcely even acknowledges himself as a “chef” any more, and evidently has scant time for the white-aproned hordes scavenging at the trough of celebrity. (Doing a food demonstration in Cape Town a few years ago he spent his entire allotted time making a béchamel sauce, seemingly bemused that the audience was more likely to have expected a complex terrine de foie gras or showpiece Opera cake. I liked the point he was making: Do you want to cook well? Master the béchamel.)

The French Menu Cookbook was first published in 1970. Richard Olney was an American living in Paris, and the book – his debut – is one of the most important culinary works of the last century. Certain early copies are highly sought-after and fetch a price. It contains a series of menus of French regional dishes, beautifully composed and with matching wine selections. Of course, these will need to be adapted to today’s wines, unless you’re a billionaire or own a château with an extensive private cellar.

But the best part of the book is the first several chapters, where Olney walks you through the basics of French cuisine. He explains its value in the first paragraph of his opening chapter, French Food and Menu Composition:

“Good and honest cooking and good and honest French cooking are the same thing. Certainly there are national dishes, just as there are regional dishes – sage and onion stuffing and apple pie will remain forever British and American (although there is nothing unique about the former except for the choice of herb, and the latter is nothing but a tarte au pommes with a lid), as will beurre blanc remain French – but it is comforting to realise that the principles of good cooking do not change as one crosses frontiers or oceans and that the success of a preparation depends on nothing more than a knowledge of those principles plus personal sensibility.”

And thereby, he has undone his own point that the dishes cited are British and American, while affirming the real point he is making: that much of the world’s great cooking stems from French cuisine. He affirms the rustic beef stew with modest eloquence:

“The steps in its preparation are identical to those for boeuf bourguignon, carbonnade, gibelotte de lapin, navarin de mouton, or coq au vin. Scalloped potatoes…” (such as my Yorkshire mother used to make) “… and gratin dauphinois are the same thing, as are creamed eggs and onions and oeufs à la tripe; pot roast is a rustic boeuf à la mode…” (see, Mom, you cooked French) “and boiled meat and vegetable dinners are to be found in French cuisine as potées and garbures.”

After a massive explanation of what wine is and the (then) French wine industry, he comes to my favourite section: Mechanics, Aromatics, and Basic Preparations. This is where you learn always to have “a sharpening steel” to hand – “stroking the blade a few times across the steel should become as automatic as brushing one’s teeth to face a new day” – and how to chop an onion, which should be “first cut in two to create a flat surface against the chopping board, then each half sliced finely, given a quarter turn, and sliced through again”. That is precisely how I always deal with an onion, and I’d forgotten that this was where I learnt it.

Aromatics. Pages 49 to 63. The book kind of falls open to these pages if you don’t count pages 181 to 290 which fall out of the book entirely and have to be picked up from the floor.

“Basic methods of cooking do not change,” Olney writes; “it is the choice of aromatics and the ways in which they are used that distinguish not only national and regional styles but the personalised cuisines of individuals.”

An aside: because certain people in my immediate sphere are nervous that braaied chicken may be pink at the bone, I have been persuaded, somewhat reluctantly, to first par cook chicken pieces. So I make an aromatic broth, throwing in whole (thwacked with a knife) garlic cloves, fresh oregano from the massive bush near my braai, a few pieces of carrot and roughly chopped onion, a quartered lemon, a bay leaf and star anise, and a few peppercorns, and simmer the chicken pieces in that. Once the chicken has been removed to go on the coals, you can remove the solid items and reduce the stock to a savoury reduction and use it as a baste, or douse the cooked pieces in it before serving.

“To illustrate but a few national differences,” Olney continues: “In Italy, garlic cloves are fried in olive oil until they begin to colour and then are discarded before the other elements of a stew or sauce are added, only the waft of garlic flavour in the oil remaining to perfume the dish; the French chop or crush it, sweat it in oil without colouring, to avoid the bitterness of browned garlic, and leave it to disintegrate through slow cooking; the Spanish chop the garlic, fry it until brown, and cook it with other ingredients, infusing into a preparation a more violent flavour.”

(Love that choice of adjective. It’s the only form of violence you’ll find in these pages.)

Basil gets the regional breakdown too:

“In Italy, it is put to multiple and wonderful uses, often in combination with tomatoes, raw or cooked, particularly in Sicily and southern Italy but also, or course, in the Genovese pesto; in France, although it commonly occurs in seventeenth- and eighteenth-century recipes, basil is now traditionally used only in the south, abundantly and exclusively for the concoction of soupe au pistou, an antique heritage from Liguria; in Greece, it is planted to ward off flies but is never used in the kitchen.”

Olney makes no mention, understandably, of the use of basil in Thai cuisine, which he may have done had he lived in our time of a world of cuisines at our fingertips and a world of ingredients in our supermarkets.

The oregano near my braai, meanwhile, while “a standby of southern Italy and of Greece, is so foreign to French usage that, although it grows wild, scenting the air throughout southern France, few people recognise it in its natural state and, dried and crumbled, it is identified as l’herbe à pizza – “the pizza herb”. So the French respect oregano as much as the Greeks respect basil. Here in Cradock where I live, in the Eastern Cape Midlands, my oregano and basil have to be cultivated, but wild garlic grows everywhere, with its tiny lilac flowers with their punch of garlicky flavour, and it is, happily, drought-resistant. A great finish to a cheesy pizza, oregano or not, or scattered over a salad.

Master everything in Olney’s aromatics section, from mirepoix and duxelles to the primordial pecking order of vegetables, and you’re well along the path of cooking the French way, or just cooking, because, as he says, you use the basic technique and then adapt it to your national cuisines or just to your own “sensibilities”. Like the oregano in the chicken broth.

The primordial pecking order of vegetables? I thought you weren’t going to ask. Says Olney: “Primordial among aromatic vegetables are the alliums – onions, shallots, garlic, leeks. Without them we would be helpless in the kitchen. Next in order of importance are carrots, mushrooms, and celery.”

Well, he is talking about French cuisine. Our culinary world has changed; we’ve branched out all over the planet and the world has come to us, into our shops and into our larders. But there’s still something to be said for knowing the basics. To cook well, as the great Marco intimated, first master the béchamel. DM/TGIFood