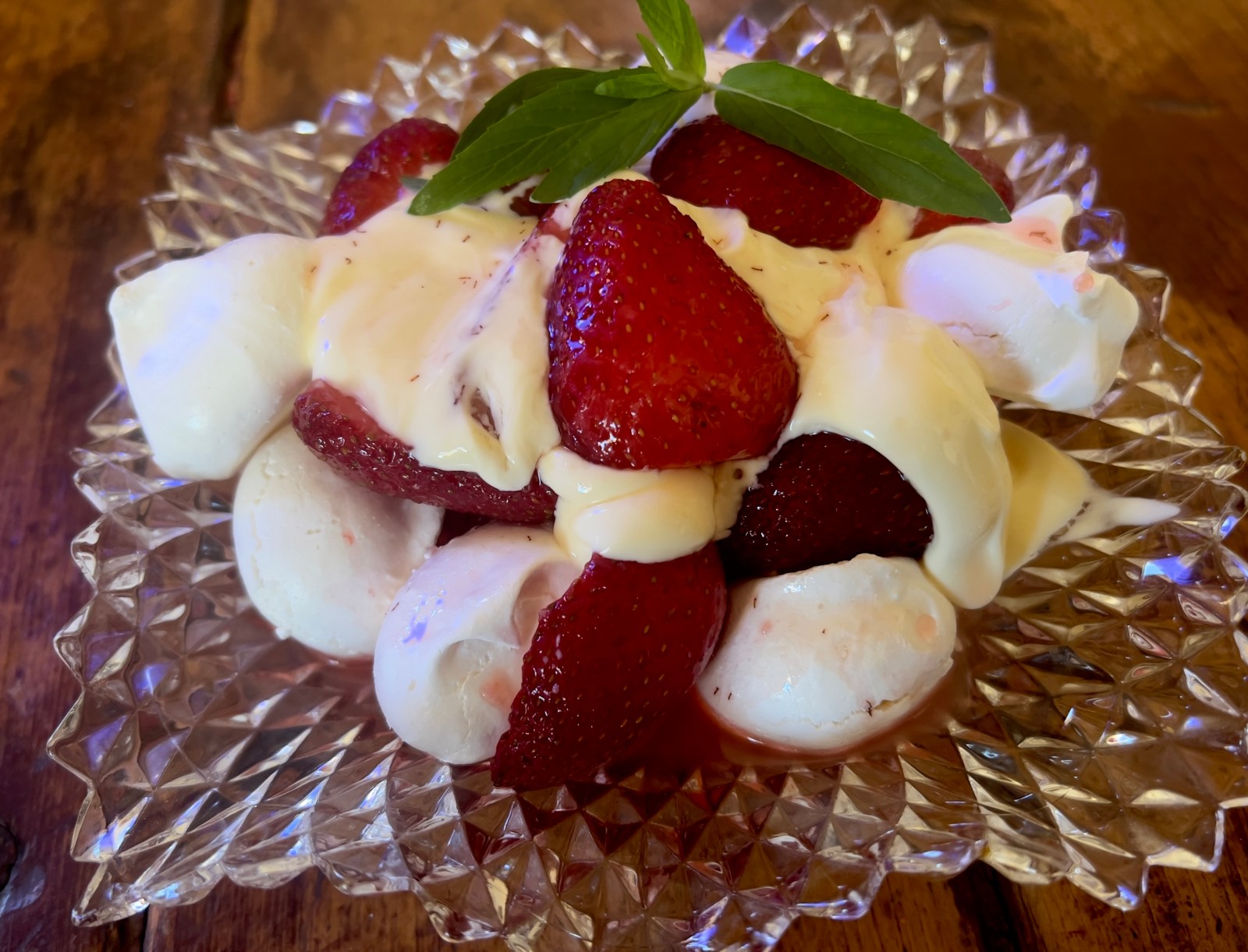 Harrow Mess, anyone? Or would you prefer a nice bowl of Lancing Mess, perhaps? If you prefer bananas to strawberries, that is, although Eton Mess used to have those too. If we thought the famous collegial dessert was always about strawberries, cream and meringue, well, as with a lot of things in the lore of food, we’d be wrong.

Many stories are apocryphal, or may be, but that doesn’t mean they’re not good stories. The one about a big bowl of strawberries, cream and meringue being dropped on the floor during a cricket match between Eton and Harrow in 1893, and the students scraping it up off the floor rather than wasting it, is good enough for many of us.

Unless you’d rather go with the labrador theory? That would have a labrador, during an Eton-Harrow match in the 1930s (some reports say the 1920s), casually sitting down on a picnic basket holding a large amount of strawberries and meringues… pavlova, really … but, nah, let’s skip right past that one. Even hungry student toffs might be unlikely to tuck into dog-hair pudding.

The Runnymede on Thames Hotel, which is just down the road from Eton College, suggests, as do others, that the story cannot be true as the first mentions of Eton Mess date to 1893. Gastro Obscura, a website full of great food stories, observes with tongue in cheek that while “Eton Mess is ubiquitous during strawberry season, it is much harder to find during the winter months”. In fact, in its earlier decades, if we accept the 1893 theory, it was often made with bananas rather than strawberries, and meringue played no part in it until much later.

Anyway, isn’t it just a pavlova? Or a knickerbocker glory? Or a fruit fool? And isn’t cranachan just a wee tad better? Cranachan is a Scottish dessert of raspberries, cream, Scottish oats and whisky. A knickerbocker glory has masses of layers of fruit, cream, meringue and ice cream. For a fruit fool, puréed stewed fruit is folded into sweetened custard or cream. Pavlova, of course, was named in honour of the Russian ballerina Anna Pavlova and is a large meringue covered in all sorts of fresh fruit and whipped cream and shared by several people.

Eton cannot claim to own the famous dessert which anyone can make and enjoy, even if they couldn’t dream of sending their offspring to the college. Boys at Harrow eat it too, but they call it Harrow Mess. Likewise, at Lancing College in West Sussex, a similar dessert is served to students but with bananas instead of strawberries.

I know, I know, my version (not that it truly needs a recipe) uses individual little meringues, but of course you can just buy a big meringue or two and bash it up, in the tradition of it being a big “mess”.

Halve the strawberries and put them in a bowl. Stir in 1 Tbsp icing sugar and leave it in the fridge to macerate for a few hours.

For the meringues, preheat the oven to 120°C and line an oven tray with baking paper.

Make sure the eggs are at room temperature. Whisk the whites in a bowl or jug with the salt until you have soft peaks (I use a jug for whisking eggs or cream so there’s less chance of splatter). Add a little sugar at a time while continuing to whisk until the sugar is incorporated. Quickly beat in the vanilla essence.

Spoon small amounts of the meringue mixture onto the lined oven tray, leaving generous gaps between them. If there’s more mixture left over, reserve it for a second batch.

Turn the oven temperature down to 90°C or its lowest heat (my gas oven does not allow me this luxury, so I just make it as low as it will go). Bake for about 90 minutes then turn off the heat altogether and let them rest in the oven while it cools down. If in doubt about temperature, err on the side of lower rather than a higher heat.

OR simply buy ready-made meringues from your store. It’s only Eton Mess, and there’s no shame in it.

Arrange the meringues, strawberries and cream prettily in dessert bowls or parfait glasses. Don’t waste the macerated strawberry juices, they can be poured over in between and on top.

TGIFood Tip: You can turn it into Boozy Eton Mess by adding a tablespoon or two of liqueur along with the icing sugar when macerating the strawberries. Drambuie or Cointreau would be good. DM/TGIFood

The salient facts about salt every cook needs to know