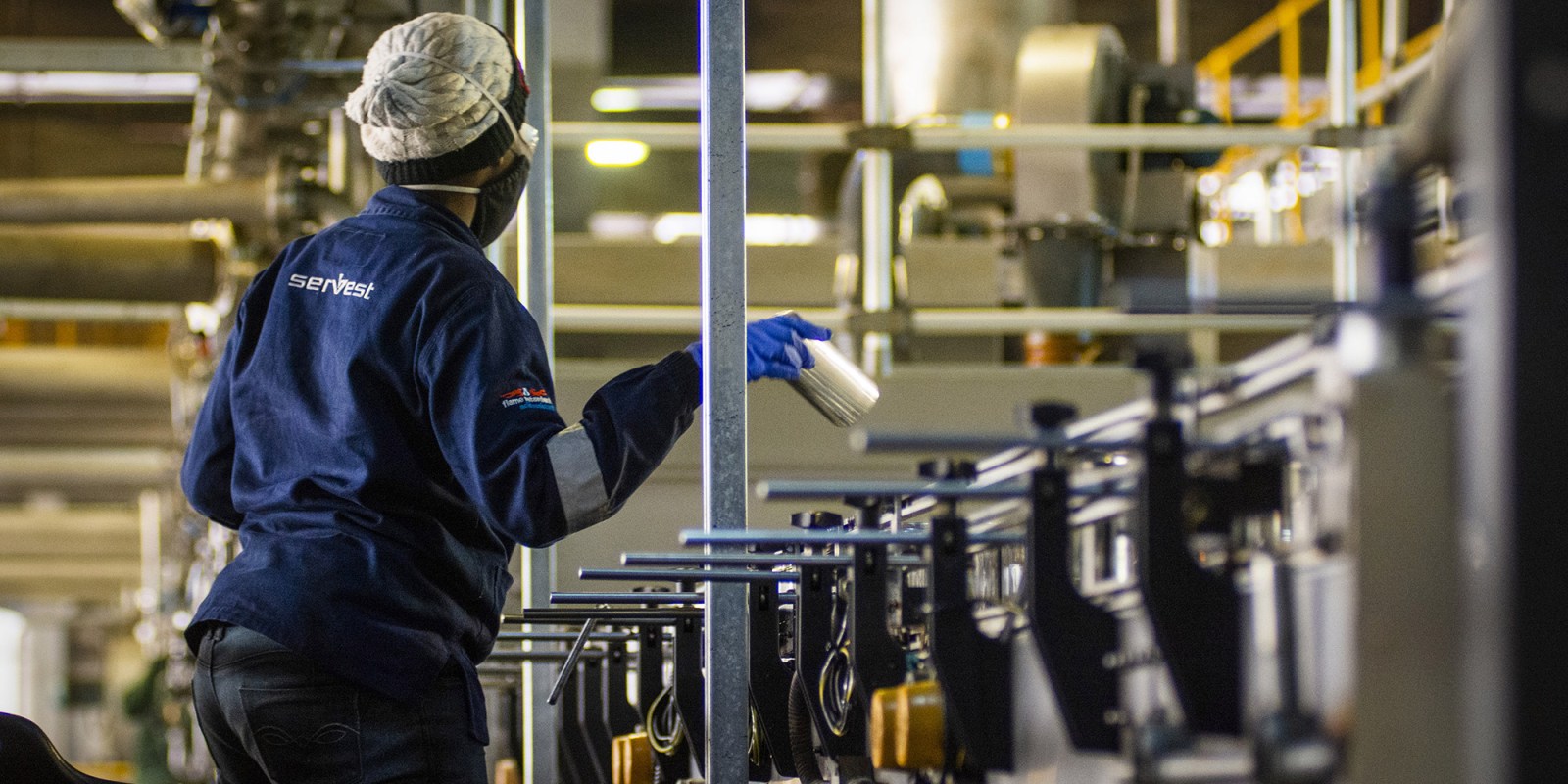 A worker on the production line at the Nampak Bevcan manufacturing plant in Springs on 13 August, 2020. (Photo: Waldo Swiegers / Bloomberg via Getty Images)

Amid the drought of good economic news in South Africa, a green shoot has emerged. The Absa Purchasing Managers’ Index rebounded in November, climbing 3.6 points to 57.2, its highest reading since before the onset of the third wave of the pandemic and the July riots.

The Absa Purchasing Managers’ Index (PMI) has now clawed back all the ground it lost during the dismal third quarter (Q3), a period when the economy is widely believed to have contracted largely because of the July riots. Statistics South Africa (Stats SA) will release those data next Tuesday.

The index had declined in September and October, so the November reading points to a rebound in manufacturing activity in the last quarter of this turbulent year.

“At 55.4, the average headline PMI reading for October and November is up notably from the 51.5 recorded in Q3. After a very poor third quarter, this bodes well for a recovery in actual manufacturing production in the fourth quarter,” Absa said.

Positive signs have certainly emerged from the latest PMI, which is drawn from monthly surveys of purchasing managers in the manufacturing sector.

“Business activity and new sales orders, the two subindices that were most severely impacted by the steel sector strike in October, were also the ones that improved the most in November. It is heartening that factory activity and the demand for manufactured goods seemed to be resilient against the impact of further bouts of load shedding in November,” Absa said.

The employment subindex also recovered to above the neutral 50 mark, but Absa cautioned against reading too much into this trend, noting a more than five-point decline in the index measuring expected business conditions to 56.8. It said that decline and the looming Covid-19 fourth wave “argues against a sustained rise in factory sector employment at this stage”.

That is a bleak outlook after Stats SA said on Tuesday that the unemployment rate hit a record of 34.9% in Q3.

On a much brighter note, the business activity index rose to 53.6 in November from 46.1 in October.

“This is despite sustained load shedding during the month, which some respondents mentioned as a constraint on activity,” Absa said.

“Even so, it seems that the normal end-of-the-year rush to complete projects supported activity… This does suggest that especially the larger manufacturers are perhaps becoming less sensitive to the impact of load shedding, probably through the increased use of generators and/or more efficient energy consumption.”

So, a green shoot has emerged amid the drought of good economic news. Still, at 57.2 on an index that ranges from zero to 100, the PMI is hardly shooting the lights out. And a number of turns of event could yet spoil the party in December, including any ham-fisted attempt by the government to tighten lockdown restrictions against the backdrop of the vaccine roll-out. There are Grinches out there who would steal the festive season just because they think they can. DM/BM