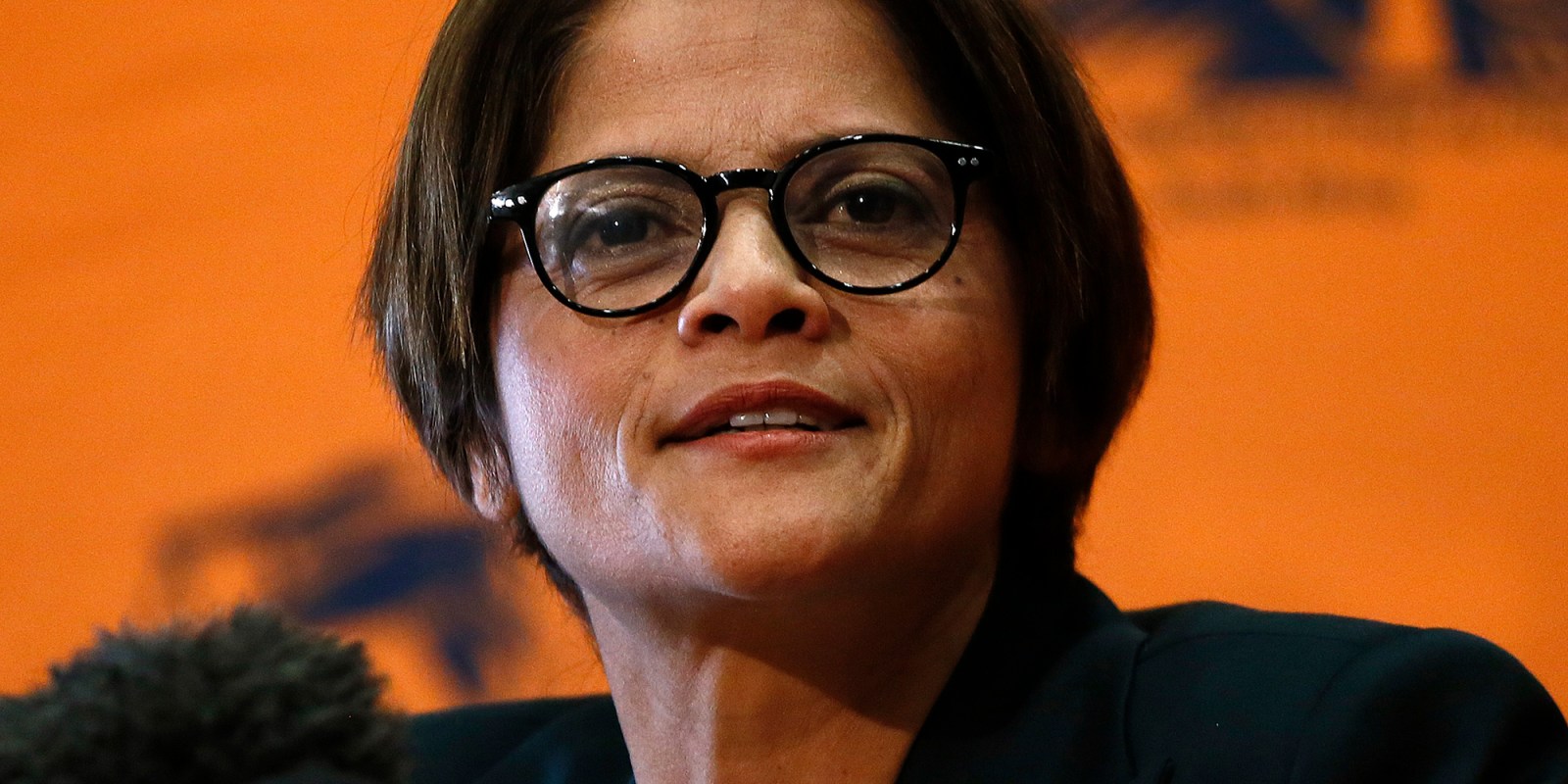 Investigating Directorate in the Office of the National Director of Public Prosecutions Advocate Hermione Cronje speaks after being introduced during a media briefing at the NPA head office on Friday, 24 May 2019. (Photo: Gallo Images / Phill Magakoe)

Hermione Cronje has submitted a request to be relieved of her duties for personal reasons.

Daily Maverick understands Cronje’s resignation was channelled to the office of National Director of Public Prosecutions, Shamila Batohi, on 30 November 2021.

It comes just two and a half years since her appointment and amid a growing level of public discontent at the slow pace of criminal prosecutions to emanate from the broader State Capture basket of corruption cases.

Cronje may serve notice of up to six months, essentially for handover purposes, or until such time as President Cyril Ramaphosa announces her replacement.

Thursday’s confirmation by Batohi’s office comes amid intense public pressure over the lack of arrests across various high-profile corruption investigations covering dockets including the Guptas, Transnet and Eskom.

Ironically, it comes barely two months since her team finally moved into its own office in Pretoria.

Cronje, who did not respond to Daily Maverick’s attempts to obtain comment, will probably leave with nothing but a thank you for your service from President Rampahosa and/or Justice Minister Ronald Lamola, who were both in Nigeria this week.

The official line appears to be that Cronje is leaving for personal reasons, part of which Daily Maverick understands included a punishing work schedule of up to 20 hours a day.

However, those in the know have expressed concern that it may also have been brought on by a string of fundamentals that impacted the ID’s ability to deliver on a vital mandate of bringing to book some of State Capture’s prime suspects.

Citing a lack of support, one insider told Daily Maverick that despite a mammoth task of leading the unit to which South Africa looked to catching State Capture’s prime suspects, Cronje struggled for the basic tools of the trade for much of her tenure.

In July 2020, Daily Maverick detailed how Cronje had but the firepower of a mid-sized law firm while being expected to take on the might megamillionaires in Regiments Capital, Trillian Capital Partners and, importantly, the Guptas, among others.

No case illustrates this striking difference better than the NPA v Regiments Capital, a case in which the NPA is attempting to restraint over R1-billion in assets it believes to be the proceeds of crime.

Cronje previously worked for the NPA and was involved in the establishment of the Asset Forfeiture Unit (AFU) during the tenure of former NDPP, Bulelani Ngcuka.

The ID, hailed in some quarters as the new “Scorpions”, was established in April 2019 with a distinct mandate of tackling complex crimes in terms of the Prevention of Organised Crime Act, the Prevention and Combatting of Corrupt Activities Act and the Public Finance Management Act.

The order has since been discharged and a decision on the NPA’s appeal is pending before the High Court in Johannesburg.

Earlier this year, the ID took former Gupta associate Iqbal Sharma and various others to court over a R24.9-million alleged scam in a case that is being described as the precursor to the new regime NPA’s Estina prosecution. This is also the ID’s maiden strike against four members of the Gupta family.

A State Capture activist and legal expert told Daily Maverick that it was concerning that Cronje may be used as a scapegoat for the much bigger failure to prosecute some of the high-profile State Capture cases.

A popular phrase that’s been thrown about in recent months is that she is not able to marshal the troops.

“That excuse though will only help for so long.”

Said one former NPA colleague: “She’s hardegat and does not do politics or diplomacy. But she understood the task at hand and the pressure of producing quality indictments that will not embarrass the State.

“Sure, she didn’t take nonsense, but rightfully so. What’s wrong with raising the bar?” this former colleague asked.

Cronje quickly became unpopular because she was not dazzled by authority and nor was she held back by the rigidity of public sector regulations, especially when it came to staffing the ID with the right calibre of staff and contract staff to deliver on its mandate.

One insider said it was clear that Cronje had become “fed up” of fighting. Her main gripe was a lack of competence and the resistance to bring in the right people.

“Hermione Cronje’s ill-omened departure will be cheered in Dubai, Vrede and Melrose Arch. Starved of resources, cooperation and sign off, she was practically forced to leave or participate in a growing farce,” said one legal expert.

This expert told Daily Maverick he believes the NPA to be bereft of courage and urgency in bringing State Capture cases to court:

“The truth is the government has no appetite for big-ticket State Capture prosecutions. If they did, Advocate Cronje and her team would have had a Zondo-sized budget and three-dozen ripe indictments. The Presidency, Ministers of Police, Justice and Dirco would be hoping to support these prosecutions. Instead, they wash their hands.”

Where is Crime Intelligence, State Security or International Relations in the quest to bring the Guptas to book?

While Cronje’s resignation is bound to be celebrated among those implicated in particularly State Capture corruption, as her departure will likely unsettle the rhythm and game plan of some of the big cases, there are enough experienced hands on deck to see things through.

The ID has a team of highly skilled internal and external senior counsel working on some of those matters.

The unit has had a rough time getting out of the starting blocks. Daily Maverick understands that it has about 100 people currently, with 50% of those being contract staff that came across from the Zondo Commission.

But, for a large part, the ID – in just two and a half years of existence – also battled a regular exodus of staff, including those who had been brought in on secondment.

While some have not been the right “fit” for the unit, others have left for valid financial considerations, Daily Maverick understands.

“These people have been in employment’s no-man’s-land. Mostly employed on contract, they worried about job security. Some could not even apply for home loans so it often made sense that good people left because there were more permanent options available elsewhere within the NPA,” an insider told Daily Maverick.

For now, the NPA has to move swiftly to ensure that continuity, especially with some of the high-profile cases initiated by the ID.

A national expert told Daily Maverick that the NPA, following the departure of former NDPP, Shaun Abrahams, has shown itself to be timid, ponderous and unable to convert State Capture evidence into prison sentences.

“It spends way too much time writing memos not indictments, a willing prisoner of its own bureaucracy.

“The deeper failure is the NPA’s sabotage by its government.

“It’s as if the government wants the state to fight with one hand behind its back. Could this be because the ANC will be on trial?

“As far as outcomes are concerned, what really is the difference between former president Jacob Zuma and Ramaphosa? Ramaphosa’s administration seems content to just abandon this constitutional duty in the veld to the elements.

“It’s a travesty made clear by Cronje’s walking away.” DM