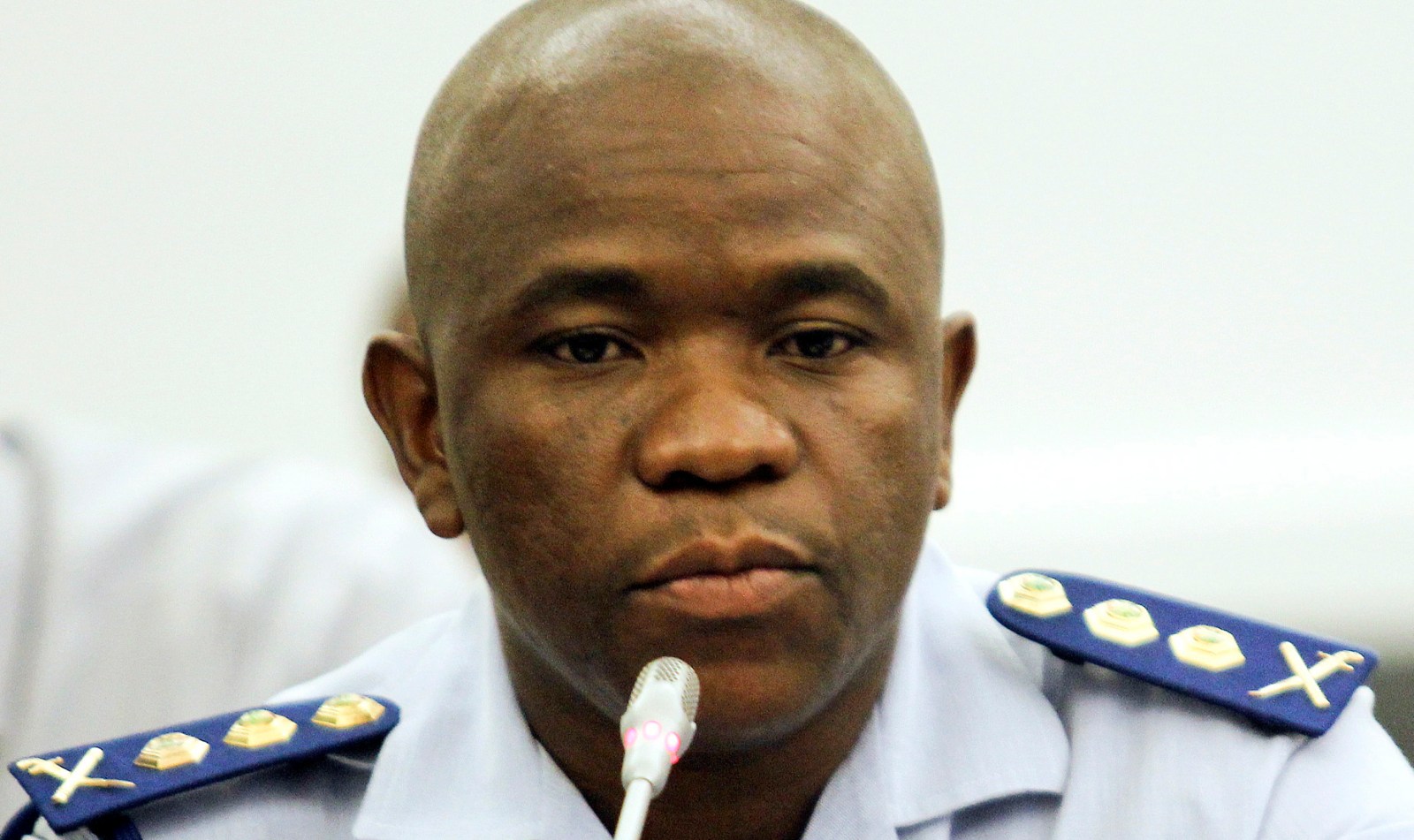 Had his follow-up appearance on Wednesday at the SA Human Rights Commission’s inquiry into the July riots been some sort of morbid contest, KwaZulu-Natal Police Commissioner Lieutenant-General Nhlanhla Mkhwanazi would have comfortably won.

Belligerent, determined and stubbornly defensive of his “men and women in blue”, career cop Lieutenant-General Nhlanhla Mkhwanazi shot from the hip while being questioned by the SA Human Rights Commission’s evidence leaders about the allegedly racially motivated murders and attempted murders in Phoenix at the time of the riots.

His responses were characteristically blunt, one of the reasons the no-nonsense officer is known to be favoured by those under his command.

“We are talking about 36 murders in Phoenix at this time, but in this financial year which started in April, to date, how many people were killed in Phoenix? You will be shocked that the number of murders in Phoenix is not coming anywhere close to the next door [neighbouring township], which is Inanda,” said Mkhwanazi.

“Inanda is known for rapes and all these other crimes that you have. The very same communities that are crying about the murders that happened in Phoenix… slaughter each other every single day.

“So, we ask ourselves a question, what is [the] problem? What must the police do? Yes, we take the blame. We fire the rest of the police because society doesn’t like them, employ new police officers… we are still going to get the same results until we get to the bottom of the problem. The problem is society.

“You ask yourself…. Not that [I] am saying the death of a person is acceptable, but a lot of them died because they went out there to go loot and the [stampedes] killed them….

“The question is, what made the person leave the house to go and steal those groceries? Maybe it was driven by hunger, but was it supposed to be done like that? As a police officer I do not have answers…”

At least 30 people, most of them black, were allegedly killed by Indian residents during the unrest that took place in Phoenix during the province-wide riots.

Advocate Buang Jones had been leading evidence about the impromptu roadblocks erected around the mostly Indian township as alleged looters from nearby informal settlements and surrounding areas tried to enter the area, when Mkhwanazi gave his response.

Some residents from surrounding areas appear to have been trying to pass through Phoenix as shortcuts to their homes, or trying to fill up their cars with petrol, as stations had run dry during the riots.

Some of the alleged victims of the racial violence – several have already appeared before the commission – were allegedly severely assaulted at the roadblocks by vigilante groups, while others were allegedly murdered by these groups. Several community members have been arrested over the Phoenix violence, with the matters yet to come to trial.

According to Mkhwanazi’s testimony, 281 people died in KwaZulu-Natal as a result of the unrest. The commission is, however, focusing on the alleged racial attacks in “Indian areas” such as Phoenix, Chatsworth and Pietermaritzburg’s Mountain Rise.

On Tuesday, Mkhwanazi testified that the majority of the deaths in the province were as a result of looters scrambling for goods and being crushed in the process, or fighting among each other for stolen goods. The same was said by KwaZulu-Natal Premier Sihle Zikalala in a public statement issued shortly after the mayhem.

Many of the rioters were drunk and armed with knives, guns and other weapons, such as rocks and bricks.

The “overwhelmed” police – particularly the 18,000 in KwaZulu-Natal under Mkhwanazi’s command – have been severely criticised for their absence during the eight days of unrest, which left communities in townships and suburbs to defend themselves, their businesses and shopping centres via impromptu patrol groups, some of which still exist today with the blessing of local police stations.

Such was the extent of the looting and the blockading of delivery routes that the province experienced R20-billion in damages and suffered shortages of food. Well over 100,000 people are estimated to have lost their jobs due to the riots, which also affected Gauteng to a lesser extent.

When evidence leader advocate Smanga Sethene started questioning Mkhwanazi about the Phoenix roadblocks, Sethene implied, and then said, that roadblocks erected on public roads by citizens were illegal, that they should not have been there, and the deaths in Phoenix at those barricades could have been prevented. He wanted to know why police at the Phoenix police station had not removed the barricades and arrested those who had erected them.

“[The police] did not fail in their constitutional mandate by failing to remove a barricade. The barricade couldn’t be stopped, it was there already,” responded Mkhwanazi.

“What did police do to ensure there were no barricades erected?” asked Sethene.

Sethene then asked about Mkhwanazi’s time as the acting national commissioner of the SAPS. Mkhwanazi turned to the commission chairperson, Andre Gaum. “Relevance of this question?” he asked.

The question was “definitely not irrelevant”, said Gaum. Following some back and forth, and Sethene not so subtly threatening Mkhwanazi with the Commissions Act, a short break was decided on.

Upon return, both men ostensibly having received advice from cooler heads, Sethene attempted to reassure Mkhwanazi about not posing questions “that would get to the heart of the national security about the country”.

The conversation then again turned to evidence given last week by former defence minister Nosiviwe Mapisa-Nqakula. The commission had already addressed this with Mkhwanazi the previous day, asking him about Mapisa-Nqakula saying that he was “uncooperative” when the defence force was deployed to KZN to assist police with unrest control.

“I did not understand where the former minister was taking that… ministers are not employed to run operations, so when [she] says to the commission she came to the province and I was not cooperative, I was confused – what was I supposed to cooperate with the minister on?”

Both Mkhwanazi and the national police commissioner, Khehla Sitole, have been dismissive of the claims made by the political heads of the defence and police who believe the police officers did not consult them enough during the violence.

Earlier in the day, Lieutenant-General Godfrey Lebeya, the national head of the Directorate for Priority Crime Investigation (DPCI), known as the Hawks, testified virtually.

The specialised investigative unit is leading the probe into the alleged “instigators” behind the riots.

Lebeya told the commission that there were 24 matters of potential instigators that were “registered”. Twelve of these were criminal dockets, and of those, seven had already appeared at court and were awaiting further investigation or trial.

“The other 12, they are still on the stage of inquiry, so we have yet not registered a case docket. So, these are matters we are seized with.”

Ongoing investigations into the alleged instigators of the unrest have caused consternation among some sectors of the public, civil society and political parties.

Those arrested and charged have been accused of using social media platforms – notably Twitter – to incite the unrest, which was sparked by the jailing of former president Jacob Zuma on contempt of court charges.

But the failure of investigators to arrest “bigger fish” allegedly complicit in the incitement – such as Zuma’s daughter Duduzile – continues to heap negative attention on the abilities of enforcement authorities.

Nevertheless, Lebeya told the commission that another alleged instigator was arrested on Tuesday and would be appearing in Roodepoort, Gauteng, within 48 hours.

Lebeya also said he was unaware of a member of SAPS Crime Intelligence being implicated in the possible planning of the unrest. Sitole had testified to such during his appearance at the hearings on Tuesday.

The Hawks had not received any “intelligence” about the unrest while it was taking place, said Lebeya. Investigations by the Hawks into the alleged instigators only started on 19 July, he said.

The unrest started with sporadic incidents on 8 July – the day after Zuma was incarcerated – and had dissipated by 15 July.

The investigations into the alleged instigators were “a priority”, he said.

“We need to finalise the matter.”

The SAHRC has temporarily set up office at the the Gateway Hotel in Umhlanga to hold the inquisitorial hearings. All evidence presented thus far has painted a picture of a wholly inadequate police force – particularly its intelligence division – and a thoroughly inept State Security Agency (SSA).

Officials from the SSA are set to appear before the commission on Thursday, followed by Police Minister Bheki Cele on Friday. DM