Durban’s UPL chemical warehouse was ‘a disaster waiting to happen’ 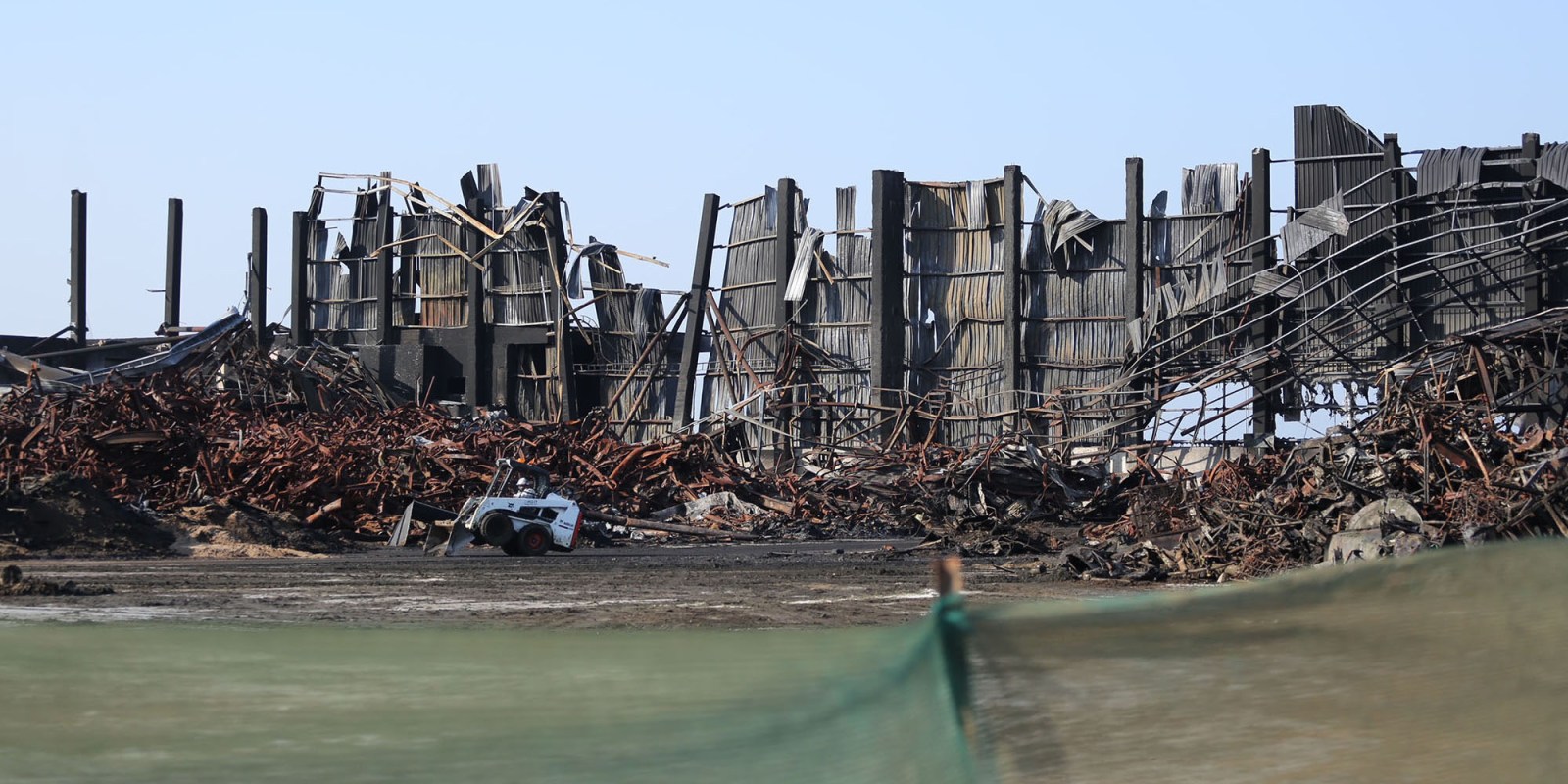 ‘We want to make quite clear that if the company had followed the necessary legislative frameworks, we may not have had a disaster to the same extent,’ SAHRC hearing is told.

Regardless of whether the UPL chemical warehouse was set on fire deliberately by a looter’s match, hit by a lightning storm, a tsunami, flood or accident, the 14,000m² storage facility in Cornubia, Durban was “a disaster waiting to happen”.

Professor Rajen Naidoo, an epidemiologist and head of occupational and environmental health at the University of KwaZulu-Natal, was testifying at a hearing in Umhlanga on Thursday, not far from the gutted remains of the pesticide, farm poisons and agro-chemicals warehouse which spewed toxic chemicals into the sea, rivers, soil and air around north Durban for several days in July.

Responding to a question about the immediate cause of the ensuing environmental disaster and potentially serious public health impacts from toxic air pollution, Naidoo said public health threats were seldom due to a single cause.

“In any such instances, there are multiple factors that influence occurrence and consequences. In this instance fire was the trigger,” he said, but also suggested that conditions at the warehouse predisposed it to what ultimately happened.

“So whether it was a looter striking a match, or a lightning storm… it was a disaster waiting to happen,” said Naidoo.

UPL representatives, who did not testify at the hearing, have previously suggested that the company’s “state of the art” fire, emergency and chemical spillage safeguards at the recently opened warehouse were “overwhelmed”.

The company did not respond to requests for further comment on Thursday night.

Naidoo said: “UPL pushed the narrative that they had diminished responsibility [due to the apparently deliberate nature of the fire].”

However, he said it was also necessary to take a few steps back to properly understand what had happened, including whether the company had followed all the correct environmental and safety planning processes before the facility was opened, in close proximity to several residential areas.

Naidoo said it was evident that apart from a few press releases in which neighbouring residents were advised to stay indoors and wear normal Covid-19 face masks, there had been a failure to properly communicate safety and health risks.

“We want to make quite clear that if the company had followed the necessary legislative frameworks we may not have had a disaster to the same extent. Why was it there in that location and under what conditions? Due care was not there.”

Naidoo also raised significant concerns about serious shortcomings by the government in responding to the pollution and public health impacts.

Naidoo, who is also a representative of the Cornubia Fire Civil Society Action Group, said it soon became apparent that government agencies did not have the necessary mechanisms for pollution remediation and health surveillance monitoring during a major crisis.

This resulted in a situation where the polluter not only paid for remediation and other measures, but also effectively controlled the appointment of “independent” consultants who appeared to have been bound (to UPL) by non-disclosure agreements.

“So, the only information provided to communities is a possibly sanitised report… There is a dependency on the polluter to provide information on the disaster they caused.”

Later in his testimony, Naidoo emphasised that: “I’m not saying that the [UPL consultants’] reports were sanitised… We don’t know.”

Nevertheless, it was not a case of polluters providing a pot of money that could be used by the government to appoint its own independent experts to investigate an issue.

While South Africa had “some of the world’s best environmental legislation”, under-resourced government agencies were left with the task of implementation. In his view, there was an urgent need for a new independent environmental agency to take responsibility for the oversight of such incidents.

“We don’t have independent oversight over companies. They don’t have the resources to make sure that all companies are adhering [to legislation].”

There was also a need for a new structure or mechanism to rapidly respond to a major environmental disaster.

“Today it’s UPL. Tomorrow it could be a tsunami hitting the coast of Durban and affecting the environment.

“We have very good [scientific] brains to respond [to environmental disasters], but do you put the brains on the side of the polluter, or do you put them under an independent agency?”

The full submission of the UPL Fire Civil Society Action Group to the commission can be read below. DM

Durban’s UPL chemical warehouse was ‘a disaster waiting to happen’