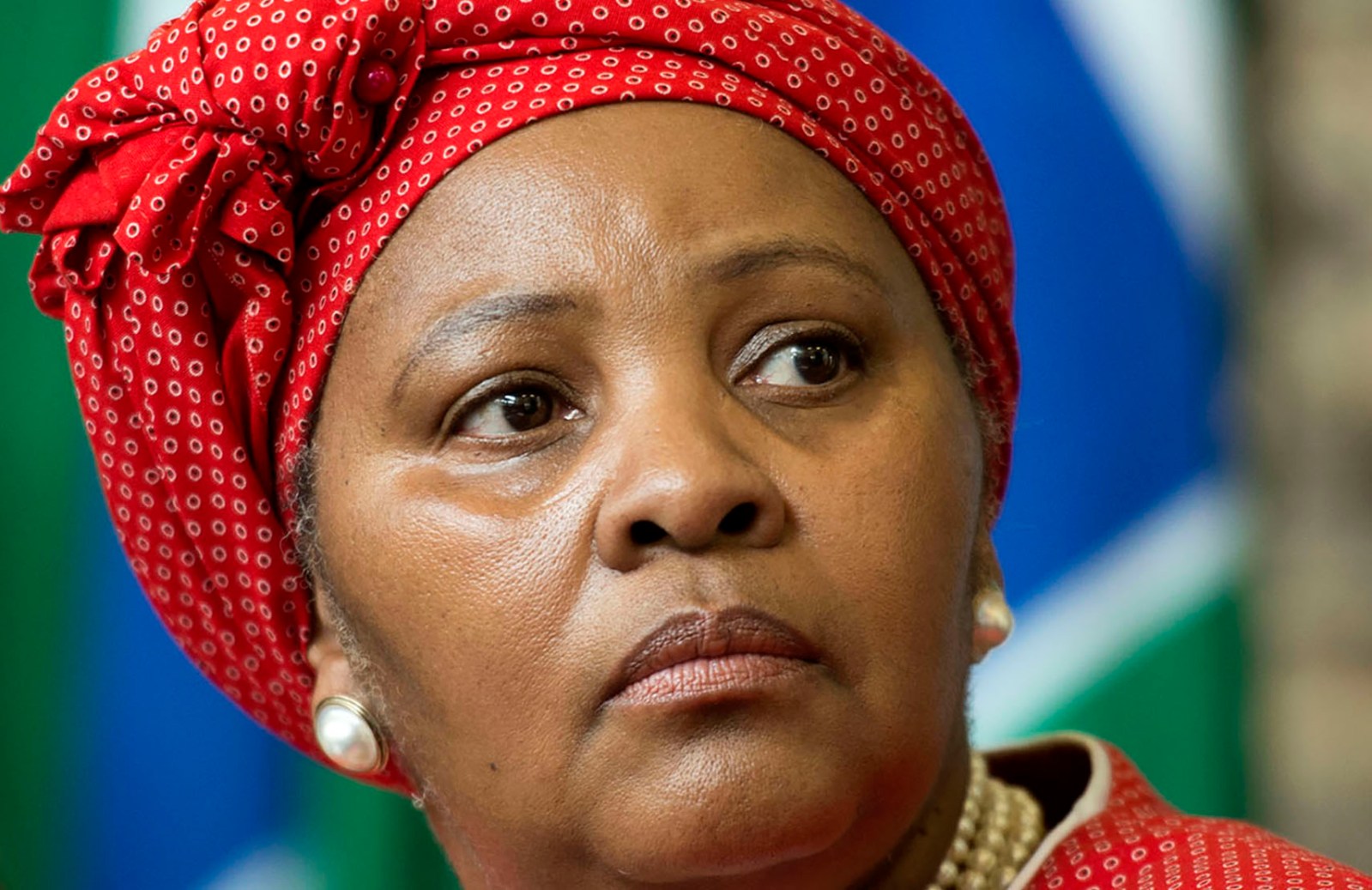 Lieutenant-General Nhlanhla Mkhwanazi also revealed that while former defence minister Nosiviwe Mapisa-Nqakula was in the province to oversee military deployments during the unrest, she had stationed herself and her generals at the five-star Beverly Hills Hotel in Umhlanga Rocks.

The South African Human Rights Commission (SAHRC) stalled for about five minutes on Tuesday evening as evidence leaders put their heads together and whispered over “contradictory” evidence given by KwaZulu-Natal police commissioner Lieutenant-General Nhlanhla Mkhwanazi and former defence minister Nosiviwe Mapisa-Nqakula, in their separate testimonies about the July riots.

He also revealed that while she was in the province to oversee military deployments during the unrest, the minister had stationed herself and her generals at the five-star Beverly Hills Hotel in Umhlanga Rocks. It was after Makoba expanded on this that Lotz and Jones leaned into each other and conferred, before Jones looked up and said:

“The legal team has noted some of the submissions and we are of the view that we will need some time to communicate a new date [for continued testimony] to the provincial commissioner… and we still need some of the documents that you have referred to, for example one of the things we are not aware of is the meetings at this five-star hotel. The testimony is in contradiction with what the former minister said.”

Before he appeared in person to try and refute the allegations, Mkhwanazi had received a hammering during the commission’s ongoing investigations into the riots as various witnesses recalled how the police were largely absent during the unrest, with Mkhwanazi’s name mentioned on several occasions.

But it was Mapisa-Nqakula’s testimony last week that there was no cooperation from Mkhwanazi when the SANDF was needing direction on where to deploy in KZN, and that the province’s top cop was on paternity leave during the unrest, that set emotions aflutter.

And so it was that earlier on Tuesday, when National Commissioner Khehla Sitole was testifying, he was grilled by the evidence leader, advocate Smanga Sethene, about why he allowed one of his provincial commissioners to take paternity leave while “the country was burning”.

Sitole did not give a coherent response to that or many other questions, but Mkhwanazi tried to take control of the allegations when presenting a timeline of how the violence unfolded, and added that by the time he had taken his leave the unrest was already over.

“On 18 July I had planned leave, my wife was going to be giving birth in Pretoria. She was scheduled to go to hospital on 19 July.

“But when we realised that from 15 July [the unrest was over] and it would just be the recovery of goods, I felt [that I should] engage with the national commissioner and the minister of police.

“I said, ‘Minister, I should be allowed to go to Pretoria and assist my wife with her birth and come back.’ The minister and commissioner agreed. On 18 July I drove to Pretoria…. My wife gave birth, and when my baby was four days old, I put her and my wife in my vehicle and drove both just over 1,000 kilometres to my in-laws… outside KZN.”

In her testimony last week, the former minister, now the Speaker of the National Assembly, told the commission: “When the defence force arrived [in KZN] there was no cooperation whatsoever from the people responsible here… the provincial commissioner.”

She said that before the SANDF had landed in KZN, she had been informed that there was “a problem” with an SANDF colonel deployed to KZN to understand what was happening on the ground.

Mkhwanazi said that when Mapisa-Nqakula, the then State Security Agency (SSA) minister Ayanda Dlodlo and Police Minister Bheki Cele had arrived in the province on 15 July, the chaos had ended.

“From there, there were operations under way to recover stolen goods, there were investigations taking place, identification of the deceased, there were no riots at the time. The majority of our military police came at that time.

“Anyone who claims there were operations of stabilising the province from 15 July onwards will have to come and confirm, because we have been keeping records as SAPS.”

Police had been monitoring the situation in Nkandla since 4 July, prior to former president Jacob Zuma’s arrest on contempt of court charges, said Mkhwanazi. He agreed with Sitole that the protests at Zuma’s Nkandla homestead were well handled by police, but that there was no way of foreseeing the chaos that would ensue just days after Zuma was incarcerated.

“The former minister of defence, who said there was a lack of cooperation with SAPS; we have it on record that we were running an operation as police alone from 4 July, but from 9 July, we experienced trucks being burnt and blockages [on the N3 in KZN]. We then had a meeting with all role players on 10 July, including the army.

“From 10 July, as we were communicating with the SANDF colonel, we told him which resources were needed. It is all on record. Perhaps the minister was not told.

“When we read the [former] minister’s statement, we realised she was informed by a chief of joint operations. [In her statement] she makes reference to a briefing in which says the SAPS are not cooperating and the military doesn’t know where to deploy. Surely it was not the colonel who was in the province with us at the time,” said Mkhwanazi.

He said that when he was granted leave, Deputy Provincial Commissioner Phumelele Makoba stood in. She would explain to the commission how things had unfolded since 19 July, said Mkhwanazi, before casually dropping the Beverly Hills hotel bombshell.

Said Makoba: “I started acting as provincial commissioner over the weekend of 17 and 18 July. Even before that we as SAPS had constant communications with the metro police, SANDF, and others.

“I am not aware of any non-cooperation between SANDF and SAPS. I have on my phone – besides meetings – I have WhatsApp messages where I was directing the SANDF where to deploy. The very first WhatsApp message about where we needed them was from 12 July. They were coming to my office, we were having meetings.

“We had a good working relationship until the weekend of 18 July when I was told there were generals being deployed by SANDF.”

A meeting of the SANDF brass took place at the Beverly Hills hotel, to which she “was not invited”, said Makoba, but she and other SAPS members “went there” nevertheless and were “welcomed” by the generals.

“We discussed our issues, where the threats were, where we needed them to deploy and relieve us from national key points. On Sunday evening about 9pm, we were introduced by the generals to the former minister of defence and the minister of the SSA… in one of the boardrooms at the Beverly Hills.

“We then had a follow-up meeting on Monday at 7am. Then the minister of police joined, and [thereafter] we had daily meetings at the provincial police headquarters [in Durban] on the 17th floor.”

Earlier, Mkhwanazi prefaced his timeline of the SAPS’s actions in KZN during the looting by stating that in May, his Public Order Policing  officers responded to 219 protests – mostly related to service delivery. By June, 268 crowd management incidents had taken place, he said, with “similar things” happening in July. “So the unit was already occupied.”

It was only on 14 July, he said, towards the tail-end of the riots that 451 members of the SANDF arrived in KZN. On 15 July, that number “started increasing” and  “we eventually had up to 5,000 members of SANDF”.

Mkhwanazi was also finally able to give the number of those in the province who died as a result of the unrest. The SAPS in KZN had recorded 281 deaths, he said.

“People ended up fighting over a bottle of whisky, stabbed each other, others were trampled upon and died because of stampedes, others were driven over by cars on roads as they were crossing.”

Asked if he agreed with previous witnesses that the unrest had been planned, Mkhwanazi responded: “We don’t know if it was planned. However, the gathering at Nkandla [to protest Zuma’s impending arrest] was influenced by what people had seen in the media. What happened from 9 July onwards, it made us realise it was now coordinated incidents that were happening.” DM