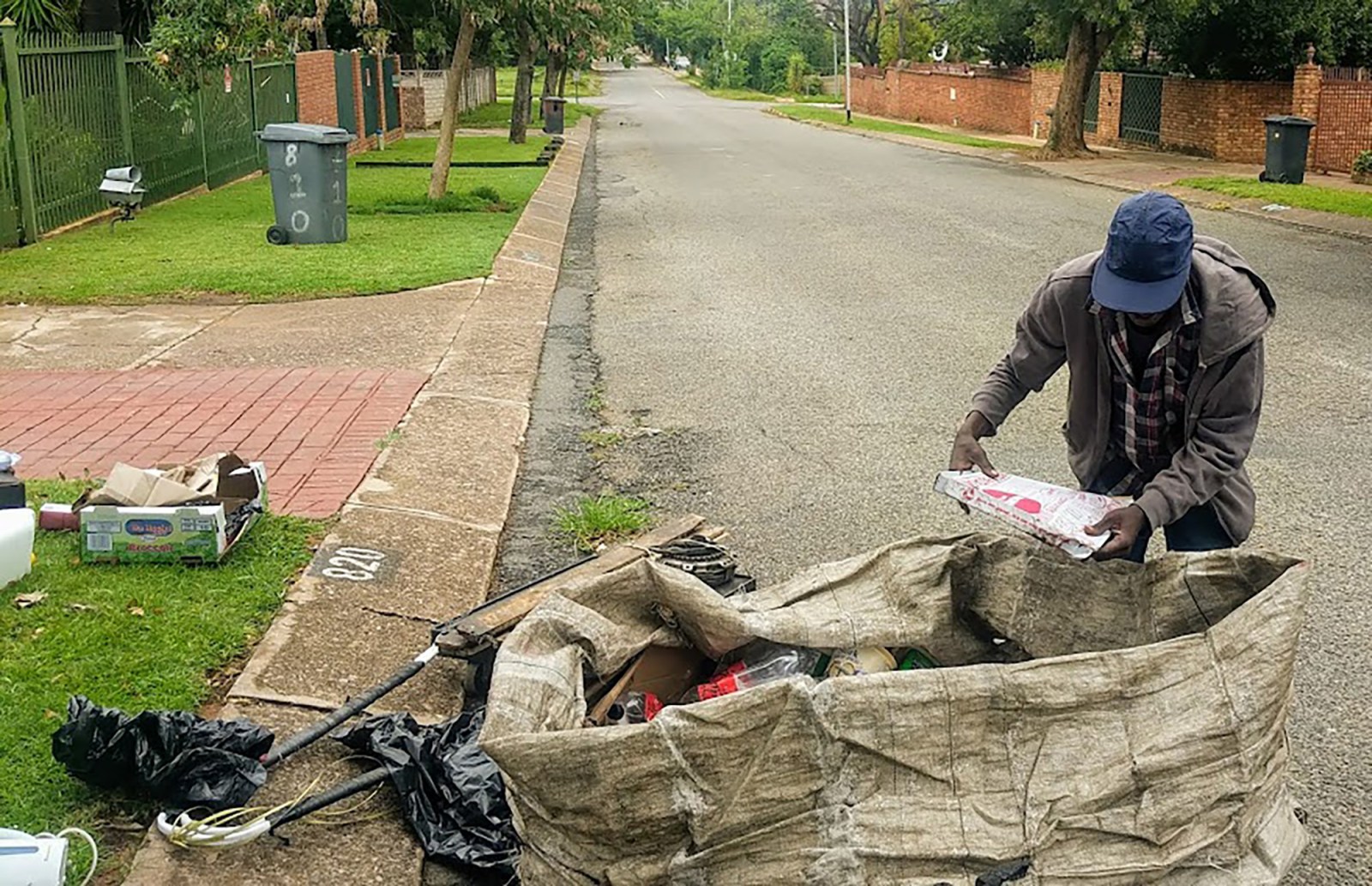 Waste pickers are increasingly an organised workforce. In South Africa they have resisted attempts by private companies to take over the recycling business, and picked up a World Wildlife Fund award. To find out more, I joined George Nyathi on his Monday rounds.

A grey dawn on 30th Avenue in Waverley, Pretoria. George Nyathi and I are already jogging up and down the suburban street in search of what I can’t stop thinking of as the starter gun: the first wheelie bin to be left outside a gate.

But it’s early. The people inside are still snoozing or showering.

Which is too bad, from a waste picker’s point of view. Municipal rubbish trucks will barrel down here, rain or shine, four or five hours from now, and then just like that, every plastic bottle and crumpled sparkling water tin will be swept up and en route to the municipal landfill.

To not lose precious minutes, then, we sort through the bins at Fat Cake City, mostly pizza boxes. But then we spot a suburbanite wheeling out the rubbish, and then a second, third. So off we go, leaving the trolley with its folded canvas bag with a friendly security guard. We’ll have time to load it later.

When I moved back from Pennsylvania to South Africa, waste pickers were one of the most noticeable signs I was living in the developing world. Come rubbish collection day, the streets in my suburban Pretoria neighbourhood would fill with an army of people, wheeling towering canvas bags through buzzing traffic — a sight utterly unfamiliar to people living in Philadelphia or Toronto.

Internationally, waste pickers are increasingly an organised workforce. In South Africa, informal waste pickers have collectively resisted attempts by private companies to take over the recycling business, while also winning a World Wildlife Fund award for their contributions to sustainability.

To find out more, I arranged to accompany George Nyathi on his Monday rounds.

Nyathi is 30 years old and lives alone in a shack near the Pretoria CBD. His father is from Johannesburg, his mother from rural KwaZulu-Natal. As a boy, “moving around a lot”, he naturally began to “hustle”, selling cigarettes and fruit in Hillbrow and later parking and guarding cars. As a result, he only finished Grade 6: “All my diplomas are from the streets.”

He began waste picking when car guard gigs dried up, during Level 5 lockdown. Today, he has four streets he works, spread around the Tshwane metropole.

The afternoon before a job he trundles his warehouse trolley to his destination. Then he’ll cook a meal with his friends, in either a park or next to a shop, depending on the weather. They’ll each have a beer: “No more before a work day.”

What if he needs to use the toilet, either overnight or during his work day?

“Oh, the bushes,” Nyathi laughs. “I clean up after myself, like a cat.”

The two of us create piles of plastic bottles, stainless steel tins and aluminium drink cans next to each of the bins we pick through. I get some odd looks from suburban home dwellers driving to work. Why is a middle-aged white man holding a notebook as he peers at their cardboard?

But everyone also waves cheerfully, and the rapport between Nyathi and the residents is palpable. Three different residents of 30th Avenue leave food for him: sandwiches wrapped in tinfoil; home-baked biscuits; a quarter watermelon. Nyathi tells me he deeply appreciates such gestures.

“It shows they consider my work meaningful.”

Important or not — and there is a legitimate scientific debate about the value of recycling — waste picking as an occupation is nothing if not intimate. The bin with the 20 750ml Lion Lager bottles: a roaring weekend party, or a rough week?  And might the pile of beer bottles have anything to do with the bill for a new clutch?

Not that George Nyathi seems to share any of my voyeurism. During the time we spend together he maintains a laser-like focus on prices: for example, R13 per kilogram for aluminium tins, but only R3 per kilogram for steel.

Nor does any of this come close to the contents of a Gupta suitcase. On an average day, Nyathi will collect R150 to R200 in recyclables — a trove he’ll have to push 10km back to Marabastad, where he has a standing business relationship with a scrapyard.

But now Nyathi perks up. He spots a gate opening and a domestic worker wheeling out a bin. The owner of this particular house is a DIY type who often throws away metals.

“Today I think you’ll be happy,” says the housekeeper, and she’s not wrong.  We find lamps and a printer cartridge, for resale. A water dispenser with an aluminium heater inside. Electric cords, which can be stripped and melted down for the copper at R100 per kilogram.

The greatest prize of all: a stainless steel pipe, weighing a couple of kilograms, which will net Nyathi R30 per kilogram — this alone could almost double the day’s taking.

“Hey man, you bring me luck,” Nyathi says — but what is this now? Down the street he spots a picker. Nyathi does share 30th Avenue with a friend who collects glass beer and wine bottles, to return to liquor stores. But not this newcomer.

So Nyathi leaves me guarding this recycling pile, the first time in my life I have been asked to protect rubbish as if my life depended on it. He runs down the street to negotiate. A donated watermelon wedge and a friendly handshake later, Nyathi returns: it has all been sorted; the newcomer will take the lower part of the street and we will take the higher.

“Some pickers get into fist fights,” Nyathi explains, “but I prefer diplomacy, if possible.”

In the meantime, the municipal truck has rumbled through, so now it’s time to expand the trolley with a lattice of planks and then fill the bag.

As we go down the street, throwing everything in it — later this afternoon Nyathi will sort it out more carefully at the scrapyard — I ask him if he’s proud of his job.

“Yes, of course,” he replies, “but I just wish I could be open about it with my family.” Apparently, his sister, who sells lottery tickets at a stand in the city, believes that all waste pickers are drug addicts, as well as unhygienic.  (Nyathi does not worry about being exposed in Daily Maverick; no one in his family reads it).

“But we provide a critical service,” he continues. Nyathi dreams of owning a bakkie one day, from which he could run a private garden clippings recycling service.

I say goodbye to Nyathi at 30th and Herzog. I know better than to try my luck at pushing a wobbling tower of boxes, bottles and tins through traffic.

“Good luck,” I tell him, and he wishes me the same. The two of us head off, me west, him north.

Our lives seem so geographically close. I first ran into Nyathi as he was pushing his trolley in the street below my house. This morning another waste picker will be checking my metals and plastics.

Thus we share corners, pavements, cities, empty yogurt containers. Yet one thing we do not share is a way of life: not me driving down the N4 in my VW Golf, while Nyathi pushes his trolley from Waverley to Lynnwood.

Put differently, in many ways the metre or so from my Monday-morning wheelie bin to my closed front gate might as well be a 6,000km flight path from Dhaka to Helsinki: the proverbial world in one country of the South African tourist slogan. A planet of inequality, right between the drainpipe and the tarmac verge on the edge of the street. DM

Glen Retief’s The Jack Bank: A Memoir of a South African Childhood won a Lambda Literary Award. He teaches creative non-fiction at Susquehanna University and is currently spending a year in South Africa as a Fulbright Scholar.