Gender-based violence and Covid-19: A collision of pand...

Gender-based violence and Covid-19: A collision of pandemics 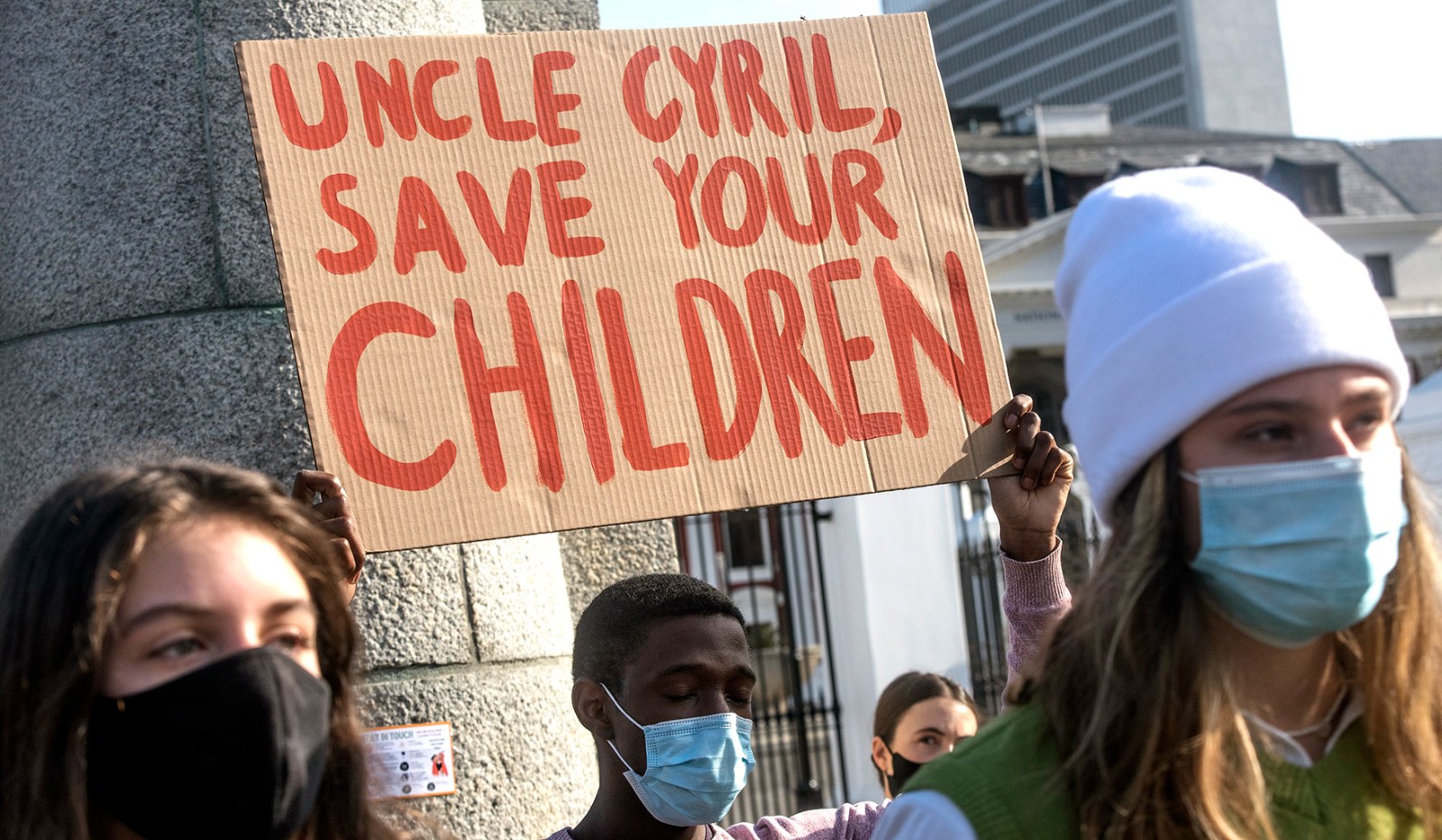 A protest outside Parliament in Cape Town on 24 April 2021. Amid the Covid-19 lockdowns, young people describe being ‘bored’ as they did not have much to do while schools were closed for months, but they also faced ever-increasing tensions in the home without the normal support systems of friends and school.(Photo: Gallo Images / Brenton Geach)

We have to ask ourselves: The government has invested billions in the fight against Covid-19, but are we committing the same level of resources to eradicate the GBV pandemic?

At the launch of the 16 Days of Activism Against Gender-Based Violence in 2020, President Cyril Ramaphosa agonised over the lives lost due to two devastating pandemics facing South Africa — Covid-19 and gender-based violence (GBV).

A year later, nearly 14 million people or a third of the South African adult population are fully vaccinated against Covid-19. In contrast, SAPS crime statistics released in November 2021 reveal a 31.7% increase in child murders and an increase in the rape and murder of women.

At the launch of this year’s 16 days of activism campaign to end violence against women and children, with dismay, the president reflected on the crime statistics as a shameful reminder that we are in “the grips of a relentless war being waged on the bodies of women and children”. We, therefore, have to ask ourselves: The government has invested billions in the fight against Covid-19, but are we committing the same level of resources to eradicate the GBV pandemic?

We have seen leadership from the president in his acknowledgement that the fight to end GBV is highly complex and requires a comprehensive solution. The National Strategic Plan (NSP) on Gender-Based Violence and Femicide (GBV-F) was presented to Parliament and approved in March 2020, as the country went into lockdown. The NSP is an ambitious plan that requires a whole-of-society response.

Simultaneously, the Department of Justice has fast-tracked the review of existing laws and policies on GBV to ensure that they are victim-centred, and other relevant laws respond to GBV. Three laws — the Criminal and Related Matters Amendment Bill, Domestic Violence Amendment Bill and the Criminal Law (Sexual Offences and Related Matters) Amendment Act Amendment Bill — were passed by Parliament in June 2021. But law reform is just a first step and on its own cannot change the experiences of women and children or make homes and communities safer.

Interviews with women, men and young people in communities across the Western Cape a year into the pandemic provide insight into some issues that require urgent attention. Those interviewed confirmed that Covid-19 has had a devastating effect on their lives, and has exacerbated the social norms that drive gendered violence in the home and communities.

Young people describe being “bored” as they did not have much to do while schools were closed for months, but they also faced ever-increasing tensions in the home without the normal support systems of friends and school.

Men, women and young people reported how the loss of employment increased stress levels with “fights” over food not unusual. For men, the inability to financially provide for families caused internal struggles.

As other aspects of their lives were unravelling, men used control over women and children as a means of regaining a sense of power in the home, resulting in severe emotional distress and violence happening behind closed doors. Covid-19 also contributed to an escalation in levels of stress due to fear of the unknown and emotional insecurities, increasing levels of conflict in households.

This toxic mix of stressors heightens the risk of violence in the home both between intimate partners and by caregivers against children. The lack of access to normal psychosocial support systems like schools, extended family or friends meant that many individuals struggled in silence.

Many men, women and young people talked about how the patriarchal structure of the family is core to maintaining social order in the family and community. The normalisation of violence and the tacit acceptance of GBV were prominent in their experiences, with some forms of GBV seen as socially acceptable or desirable behaviour — and no longer considered as “violence” at all.

Through these interviews, we have learnt how boundaries become blurred and sexual engagement with children and young people becomes tolerated and even normalised.

As we enter the 16 days of activism, it is important that we stop, reflect and redirect our moral compass — to ensure the protection of children and young people at all costs. We have an NSP GBV-F that is meant to address the social norms that underpin GBV. This needs to be urgently activated if we want to offer women and children the protection they are afforded by the law.

The evidence from research in other violent contexts is clear — GBV can be prevented. Programmes like SASA! in Uganda mobilise communities and have shown positive changes in community attitudes, norms, and behaviours around GBV.

Similarly, Bandebereho, a fatherhood and couples’ intervention in Rwanda, has been shown to substantially reduce women’s experience of physical and sexual intimate partner violence and men and women’s use of harsh physical punishment of children. We need to draw on these innovative strategies to prevent GBV by working together to implement evidence-based interventions that prevent violence across the life course.

Preventing GBV requires a partnership between government, civil society, academics and business.  It is crucial that the NSP GBV-F is realistically costed and funded through a mechanism that is able to reach programmes and services in communities where the need is the greatest.

The current budget to address GBV is woefully inadequate and does not match the magnitude of the problem facing the nation. If we are serious about uprooting GBV then we require a multipronged approach and a budget to support this comprehensive plan. This includes a focus on scaling-up prevention programmes, responding to the needs of victims of violence, and providing services to support families and reduce the pressures that drive a cycle of violence that cuts across generations. DM/MC