Curious Kids: Why does cold air go down and hot air go...

Curious Kids: Why does cold air go down and hot air go up? 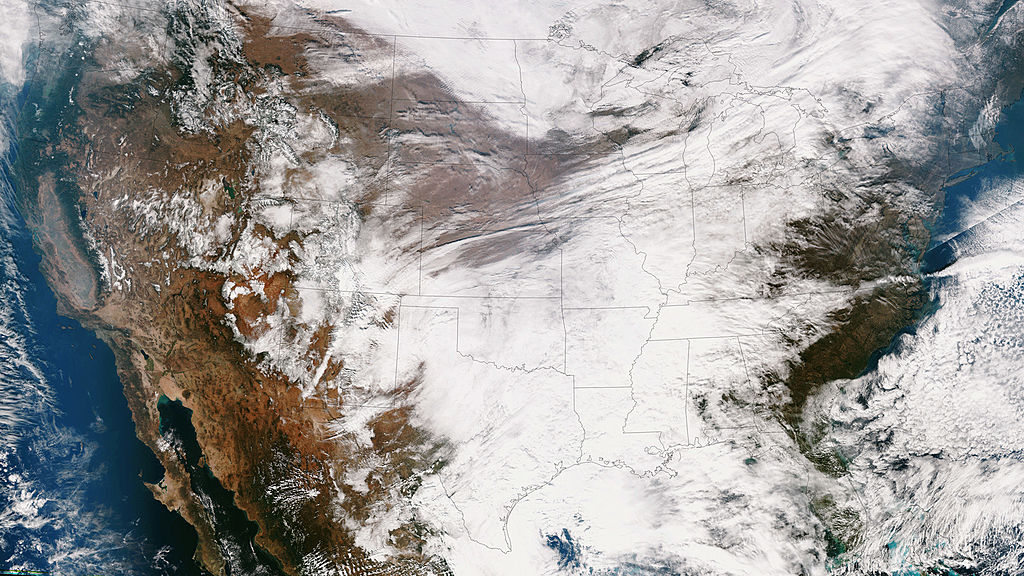 In this handout image provided by NASA/NOAA, a large winter system moves across the United States and is combining with cold air moving down from Canada, bringing snow to some areas November 25, 2013. Major travel impacts are expected along the main highways throughout the eastern U.S. (Photo by NASA/NOAA via Getty Images)

Does cold air go down because the earth’s core is made out of magma and does hot air go up because it’s cold out in space – and does the circle repeat? (Neo, 10, Boksburg, South Africa)

Thank you, Neo, for this great question! You’ve clearly got a very analytical mind, and would make an excellent atmospheric physicist – that’s a researcher who looks at the physical processes happening in our atmosphere – one day.

The rising of hot air and sinking of cool air is important for almost every aspect of our day to day weather and our long term climate. It affects which way the wind blows and how fast it blows. It also affects whether we are likely to have rain, and the type of rainfall. Over larger areas of the earth, and over longer time periods, it even influences our seasons. So this is a really important question, and one which climatologists like myself work on in many aspects of our jobs.

I want to start by describing what’s happening in the earth’s core, then tell you a little bit about the temperature of space. Once I’ve done that, I’ll explain the real reasons hot air rises and cold air sinks.

The Earth’s core and outer space

If you were to cut a slice out of the earth, you would see four clear layers. The crust is the thin outer layer – much like an orange skin. The crust is hard, made up of solid rock. It’s the part of the earth that we walk on. Below that is a thicker layer called the mantle; it’s a viscous layer of molten (melted) rock. Below that is the outer core, and right at the centre of the earth the inner core. These are very hot layers of molten rock and metal.

And you are quite right –- the earth’s core is very, very hot. The inner core, made up of iron, is approximately 6,000°C. Even the upper mantle, just below the crust, has an average temperature of 2,000°C. That’s 100 times hotter than most daytime temperatures during spring in South Africa.

Now, let’s talk about the temperature of space.

The earth is surrounded by an atmosphere – a layer of gases that we breathe in and out, and that control our temperatures by absorbing some of the heat, and reflecting the rest. Beyond the atmosphere is what is called “outer space”.

The temperature of outer space just outside the earth’s atmosphere is about 10.17°C. Outer space is heated directly by the sun. The areas in the sun are as warm as 120°C, while areas shaded by the earth are as cold as -100°C. Again, you’re right: this is a lot cooler than the earth’s inner core.

It’s correct that the earth’s core is very hot and space is much cooler. But that’s not the reason hot air rises and cool air sinks.

To come to the real reason, let’s turn to a field of science called thermodynamics. This is the branch of physics which studies heat and energy. Thermodynamics allows us to understand exactly what’s happening to individual bubbles of air. Did you know that the air around us is made of millions and millions of tiny air bubbles that sit very closely together?

Heating of the air can occur via conduction or convection – transferring heat to these air bubbles, and sharing it between them. The land surface heats up during the day because of solar radiation coming in from the sun. This incoming solar radiation is absorbed by the earth, warming it up. It is then released from the earth as long wave radiation, and heats up the air above the ground.

Those air bubbles then move around and bump into each other, sharing their heat between themselves.

When the ground heats up an air bubble above it, that air bubble expands – much like our feet swell up when they’re very hot in our shoes. As the air bubble heats up, the weight of that bubble is spread over a bigger area and so it becomes less dense.

As these air bubbles become less dense, they rise because they weigh less than what’s next to them. This is the same when you let go of a helium balloon and it floats away: the helium gas in the balloon is less dense than the air in our atmosphere (which is made up of a large amount of much heavier nitrogen).

The opposite happens when air cools down. The air bubbles contract, their weight takes up much less space and so they become more dense, and sink. This can happen if the air particles move away from the source of heat; they might have risen very high, or moved to an area over a cool lake or over some shade.

So, there’s no link between the earth’s core, space’s temperature and the behaviour of cold air versus hot air. But you definitely think like a scientist, Neo, because you are interested in how one thing influences another. Maybe one day you’ll study thermodynamics, too! DM/ML

Jennifer Fitchett is an associate professor of Physical Geography, University of the Witwatersrand.