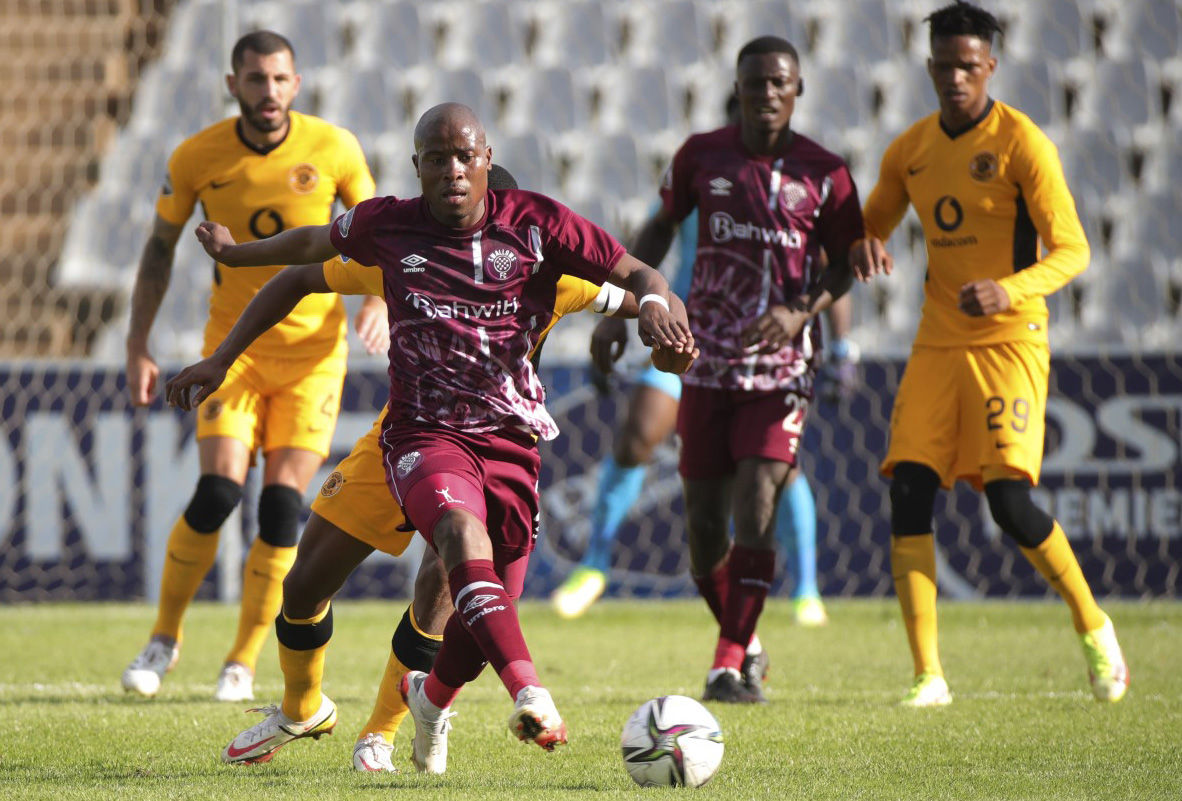 Thabo Matlaba of Moroka Swallows on the charge during a DStv Premiership match against Kaizer Chiefs at Dobsonville Stadium in Soweto on 28 November 2021. (Photo: Gavin Barker/BackpagePix/Gallo Images)

With the team having earned only eight points from 12 DStv Premiership games, whoever takes over the coaching reins at relegation-threatened Swallows will have to hit the ground running to try to motivate a despondent group of players.

Having made a return to the top-flight after more than half a decade wallowing in the wilderness of the bottom tiers of South African football, last season Swallows laid a decent foundation for their continued flight in the DStv Premiership.

In 2020/21, the first season back in the Premiership, they managed to finish in sixth place, just three points off a top-four spot.

Even then, though, there were signs of the rut the team now finds itself in.

From their 30 games that season, even though they only lost two matches, the Dube Birds managed just eight wins. The rest of their total of 44 points came courtesy of a whopping 20 draws.

In the new campaign they have already lost six matches. This is in stark contrast to their form in the last two seasons, including the 2019/20 campaign where they won the GladAfrica Championship to earn automatic promotion in the top-flight. Then they fell to only seven defeats in 30 games. That accounts for a total of nine defeats in two seasons.

In their last 30 league matches since being promoted, including the current campaign, the Dube Birds have won only two. They beat Black Leopards at the tail end of last season and Royal AM at the beginning of this season. All their other results have either been draws or defeats.

To arrest this rotten run, the hierarchy of the team announced they had fired Brandon Truter, the coach who earned them promotion to the Premiership, last weekend. The decision came after yet another disappointing result, this time being thumped 3-1 by Kaizer Chiefs.

In a statement the club said that after receiving a report from the coaching staff, the management was convinced that something “drastically” needed to change for one of South Africa’s oldest teams to turn around its season.

“With the team at the rock bottom of the DStv Premiership, management has resolved that the entire coaching staff should not report for duty with immediate effect. An interim arrangement will be announced soon,” said the team’s chairperson, David Mogashoa.

The club also moved to assure supporters that they were doing everything in their power to alter the course of the team. This comes after the team’s followers threatened to protest and show their displeasure over the current state of the team, as well as concern that they might be relegated again.

The fans are right to be concerned. On top of defensive woes, Swallows have struggled in front of the goal. They have scored the least so far in the DStv Premiership’s 2021/22 edition – a paltry three goals from 12 matches to date.

The league’s leading scorer so far in 2021/22, Mamelodi Sundowns’ Peter Shalulile, has netted three times that on his own.

The club is conducting interviews for either a short- or long-term replacement for Truter.

Names including Gavin Hunt, who is on the sidelines after being suspended by Chippa United due to their own struggles almost halfway through the season, have come up.

Hunt coached the Dube Birds between 2002 and 2007, winning the Absa Cup (now the Nedbank Cup) and leading them as high as third spot.

The experienced Cavin Johnson, who recently worked as Pitso Mosimane’s assistant at Al Ahly, is also on the market.

“We got a lot of applications, some we know, others we don’t know. We have to announce it before the game against Maritzburg United. Later this week, we will have a coach, whether it is interim or permanent. Every available coach will be linked with us currently,” said the team’s CEO, Sipho Xulu, as quoted by Sowetan.

Whoever the club eventually settles on as their chosen saviour will have their work cut out. They will take over a team where the players have struggled for confidence due to the results, and will only have a short time to try to instil belief in them before the league shuts down for the Christmas break. DM